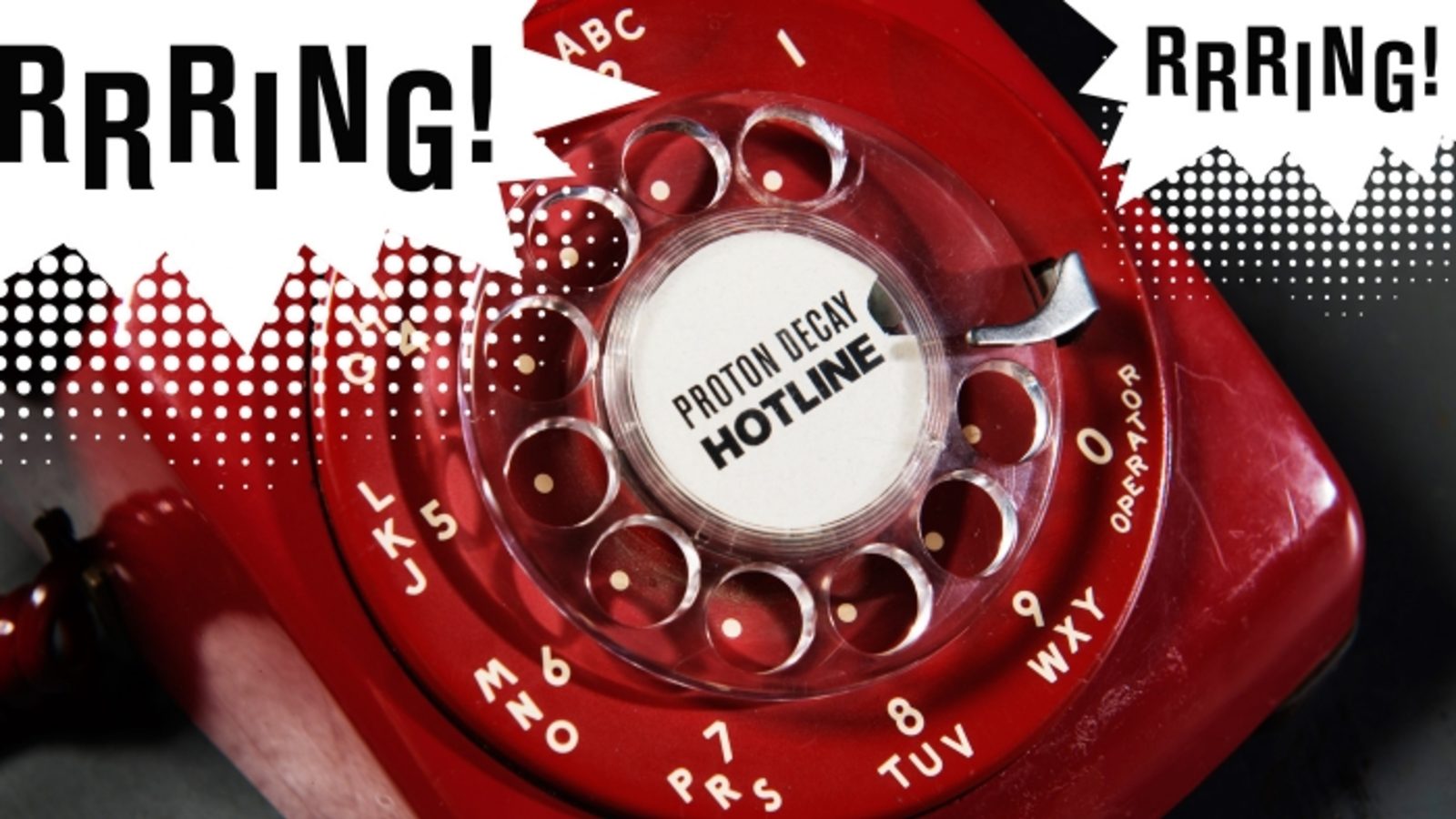 Is it possible that these fundamental building blocks of atoms have a finite lifetime?

The stuff of daily existence is made of atoms, and all those atoms are made of the same three things: electrons, protons and neutrons.

Protons and neutrons are very similar particles in most respects. They’re made of the same quarks, which are even smaller particles, and they have almost exactly the same mass.

Yet neutrons appear to be different from protons in an important way: They aren’t stable. A neutron outside of an atomic nucleus decays in a matter of minutes into other particles.

A free proton is a pretty common sight in the cosmos. Much of the ordinary matter (as opposed to dark matter) in galaxies and beyond comes in the form of hydrogen plasma, a hot gas made of unattached protons and electrons. If protons were as unstable as neutrons, that plasma would eventually vanish.

But that isn’t happening. Protons—whether inside atoms or drifting free in space—appear to be remarkably stable. We’ve never seen one decay.

However, nothing essential in physics forbids a proton from decaying. In fact, a stable proton would be exceptional in the world of particle physics, and several theories demand that protons decay.

If protons are not immortal, what happens to them when they die, and what does that mean for the stability of atoms? 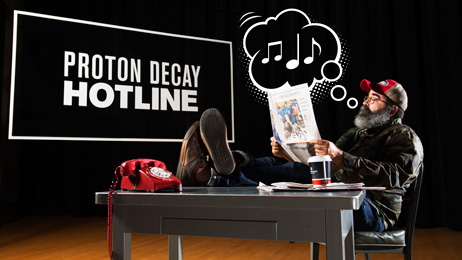 Protons aren’t constrained the same way: They are more massive than a number of other particles, and the fact that they are made of quarks allows for several possible ways for them to die.

For comparison, a neutron decays into a proton, an electron and a neutrino. Both energy and electric charge are preserved in the decay: A neutron is a wee bit heftier than a proton and electron combined, and the positively-charged proton balances out the negatively-charged electron to make sure the total electric charge is zero both before and after the decay. (The neutrino—or technically an antineutrino, the antimatter version—is necessary to balance other things, but that’s a story for another day.)

Because atoms are stable and we’ve never seen a proton die, perhaps protons are intrinsically stable. However, as Kaladi Babu of Oklahoma State University points out, there’s no “proton conservation law" like charge conservation to preserve a proton.

“You ask this question: What if the proton decays?” he says. “Does it violate any fundamental principle of physics? And the answer is no.”

No GUTs, no glory

So if there’s no rule against proton decay, is there a reason scientists expect to see it? Yes. Proton decay is the strongest testable prediction of several grand unified theories, or GUTs.

GUTs unify three of the four fundamental forces of nature: electromagnetism, the weak force and the strong force. (Gravity isn’t included because we don’t have a quantum theory for it yet.)

The first GUT, proposed in the 1970s, failed. Among other things, it predicted a proton lifetime short enough that experiments should have seen decays when they didn’t. However, the idea of grand unification was still valuable enough that particle physicists kept looking for it. (You might say they had a GUT feeling. Or you might not.)

“The idea of grand unification is really beautiful and explains many things that seem like bizarre coincidences,” says theorist Jonathan Feng, a physicist at the University of California, Irvine.

Feng is particularly interested in a GUT that involves Supersymmetry, a brand of particle physics that potentially could explain a wide variety of phenomena, including the invisible dark matter that binds galaxies together. Supersymmetric GUTs predict some new interactions that, as a pleasant side effect, result in a longer lifetime for protons, yet still leave proton decay within the realm of experimental detection. Because of the differences between supersymmetric and non-supersymmetric GUTs, Feng says the proton decay rate could be the first real sign of Supersymmetry in the lab.

However, Supersymmetry is not necessary for GUTs. Babu is fond of a GUT that shares many of the advantages of the supersymmetric versions. This GUT’s technical name is SO(10), named because its mathematical structure involves rotations in 10 imaginary dimensions. The theory includes important features absent from the Standard Model such as neutrino masses, and might explain why there is more matter than antimatter in the cosmos. Naturally, it predicts proton decay. 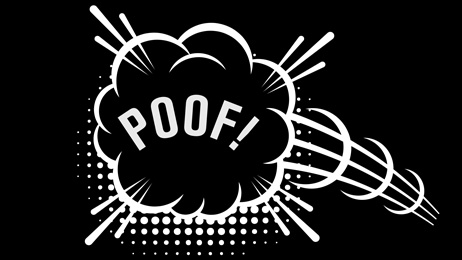 The search for proton decay

Much rests on the existence of proton decay, and yet we’ve never seen a proton die. The reason may simply be that protons rarely decay, a hypothesis borne out by both experiment and theory. Experiments say the proton lifetime has to be greater than about 1034 years: That’s a 1 followed by 34 zeroes.

For reference, the universe is only 13.8 billion years old, which is roughly a 1 followed by 10 zeros. Protons on average will outlast every star, galaxy and planet, even the ones not yet born.

The key phrase in that last sentence is “on average.” As Feng says, it’s not like “every single proton will last for 1034 years and then at 1034 years they all boom! poof! in a puff of smoke, they all disappear.”

Because of quantum physics, the time any given proton decays is random, so a tiny fraction will decay long before that 1034-year lifetime. So, “what you need to do is to get a whole bunch of protons together,” he says. Increasing the number of protons increases the chance that one of them will decay while you’re watching.

The second essential step is to isolate the experiment from particles that could mimic proton decay, so any realistic proton decay experiment must be located deep underground to isolate it from random particle passers-by. That’s the strategy pursued by the currently operating Super-Kamiokande experiment in Japan, which consists of a huge tank with 50,000 tons of water in a mine. The upcoming Deep Underground Neutrino Experiment, to be located in a former gold mine in South Dakota, will consist of 40,000 tons of liquid argon.

Because the two experiments are based on different types of atoms, they are sensitive to different ways protons might decay, which will reveal which GUT is correct … if any of the current models is right. Both Super-Kamiokande and DUNE are neutrino experiments first, Feng says, “but we're just as interested in the proton decay possibilities of these experiments as in the neutrino aspects.”

After all, proton decay follows from profound concepts of how the cosmos fundamentally operates. If protons do decay, it’s so rare that human bodies would be unaffected, but not our understanding. The impact of that knowledge would be immense, and worth a tiny bit of instability. 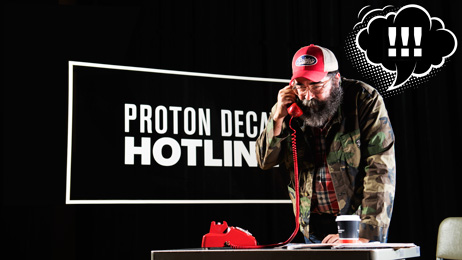 Sandbox Studio, Chicago with Reidar Hahn, Fermilab
Like what you see? Sign up for a free subscription to symmetry!
Follow
Use your browser’s print dialog box to create a pdf.
Popular on symmetry