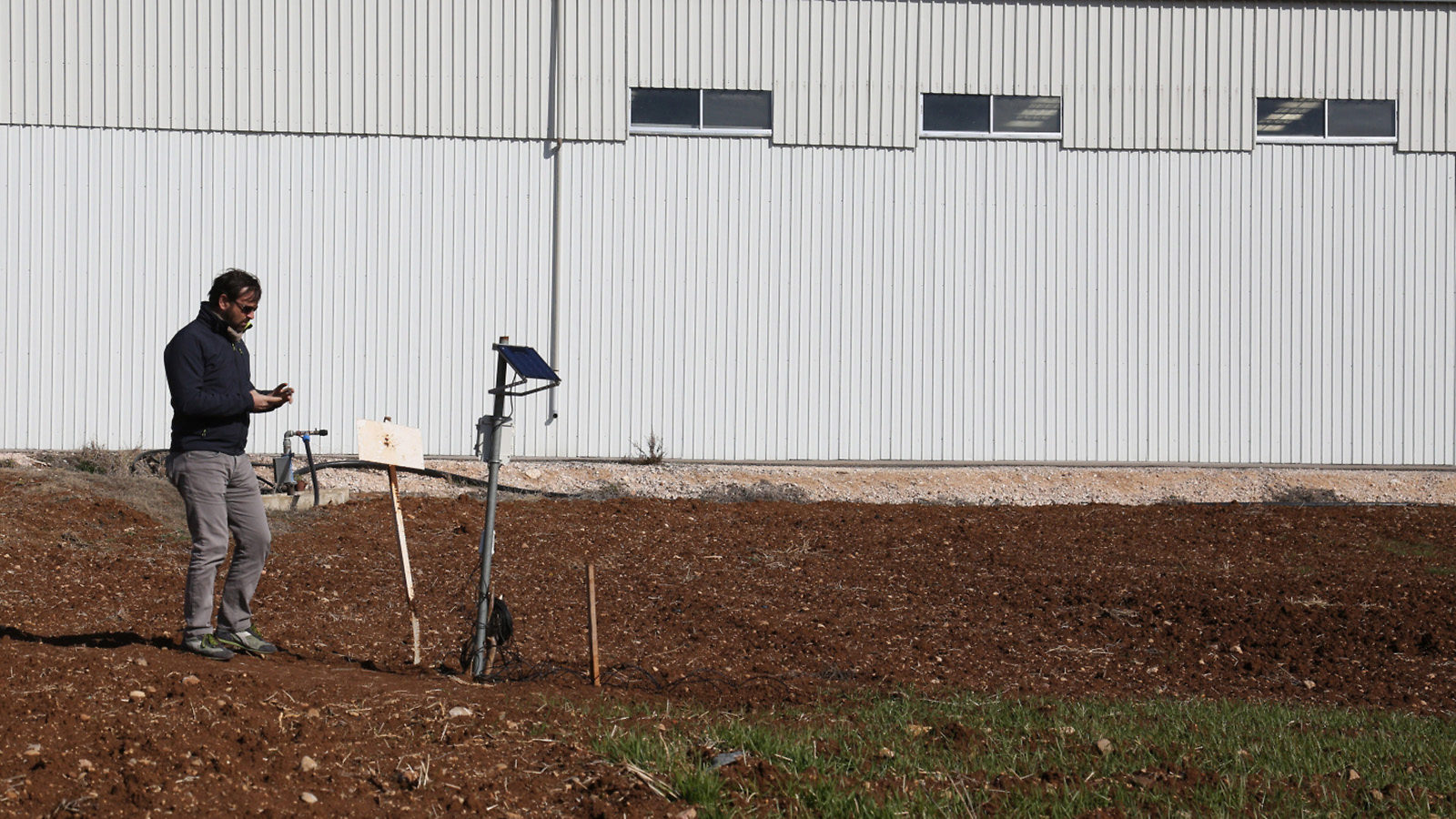 People who tend crops in Lebanon and people who tend particle detectors on the border of France and Switzerland have a need in common: large-scale humidity and temperature monitoring. A scientist who noticed this connection is working with farmers to try to use a particle physics solution to solve an agricultural problem.

Farmers, especially those in dry areas found in the Middle East, need to produce as much food as possible without using too much water. Scientists on experiments at the Large Hadron Collider want to track the health of their detectors—a sudden change in humidity or temperature can indicate a problem.

To monitor humidity and temperature in their detector, members of the CMS experiment at the LHC developed a fiber-optic system. Fiber optics are wires made from glass that can carry light. Etching small mirrors into the core of a fiber creates a “Bragg grating,” a system that either lets light through or reflects it back, based on its wavelength and the distance between the mirrors.

“Temperature will naturally have an impact on the distance between the mirrors because of the contraction and dilation of the material,” says Martin Gastal, a member of the CMS collaboration at the LHC. “By default, a Bragg grating sensor is a temperature sensor.”

Scientists at the University of Sannio and INFN Naples developed a material for the CMS experiment that could turn the temperature sensors into humidity monitors as well. The material expands when it comes into contact with water, and the expansion pulls the mirrors apart. The sensors were tested by a team from the Experimental Physics Department at CERN.

In December 2015, Lebanon signed an International Cooperation Agreement with CERN, and the Lebanese University joined CMS. As Professor Haitham Zaraket, a theoretical physicist at the Lebanese University and member of the CMS experiment, recalls, they picked fiber optic monitoring from a list of CMS projects for one of their engineers to work on. Martin then approached them about the possibility of applying the technology elsewhere.

With Lebanon’s water resources under increasing pressure from a growing population and agricultural needs, irrigation control seemed like a natural application. “Agriculture consumes quite a high amount of water, of fresh water, and this is the target of this project,” says Ihab Jomaa, the Department Head of Irrigation and Agrometeorology at the Lebanese Agricultural Research Institute. “We are trying to raise what we call in agriculture lately ‘water productivity.’”

The first step after formally establishing the Fiber Optic Sensor Systems for Irrigation (FOSS4I) collaboration was to make sure that the sensors could work at all in Lebanon’s clay-heavy soil. The Lebanese University shipped 10 kilograms of soil from Lebanon to Naples, where collaborators at University of Sannio adjusted the sensor design to increase the measurement range.

During phase one, which lasted from March to June, 40 of the sensors were used to monitor a small field in Lebanon. It was found that, contrary to the laboratory findings, they could not in practice sense the full range of soil moisture content that they needed to. Based on this feedback, “we are working on a new concept which is not just a simple modification of the initial architecture,” Haitham says. The new design concept is to use fiber optics to monitor an absorbing material planted in the soil rather than having a material wrapped around the fiber.

“We are reinventing the concept,” he says. “This should take some time and hopefully at the end of it we will be able to go for field tests again.” At the same time, they are incorporating parts of phase three, looking for soil parameters such as pesticide or chemicals inside the soil or other bacterial effects.

If the new concept is successfully validated, the collaboration will move on to testing more fields and more crops. Research and development always involves setbacks, but the FOSS4I collaboration has taken this one as an opportunity to pivot to a potentially even more powerful technology.