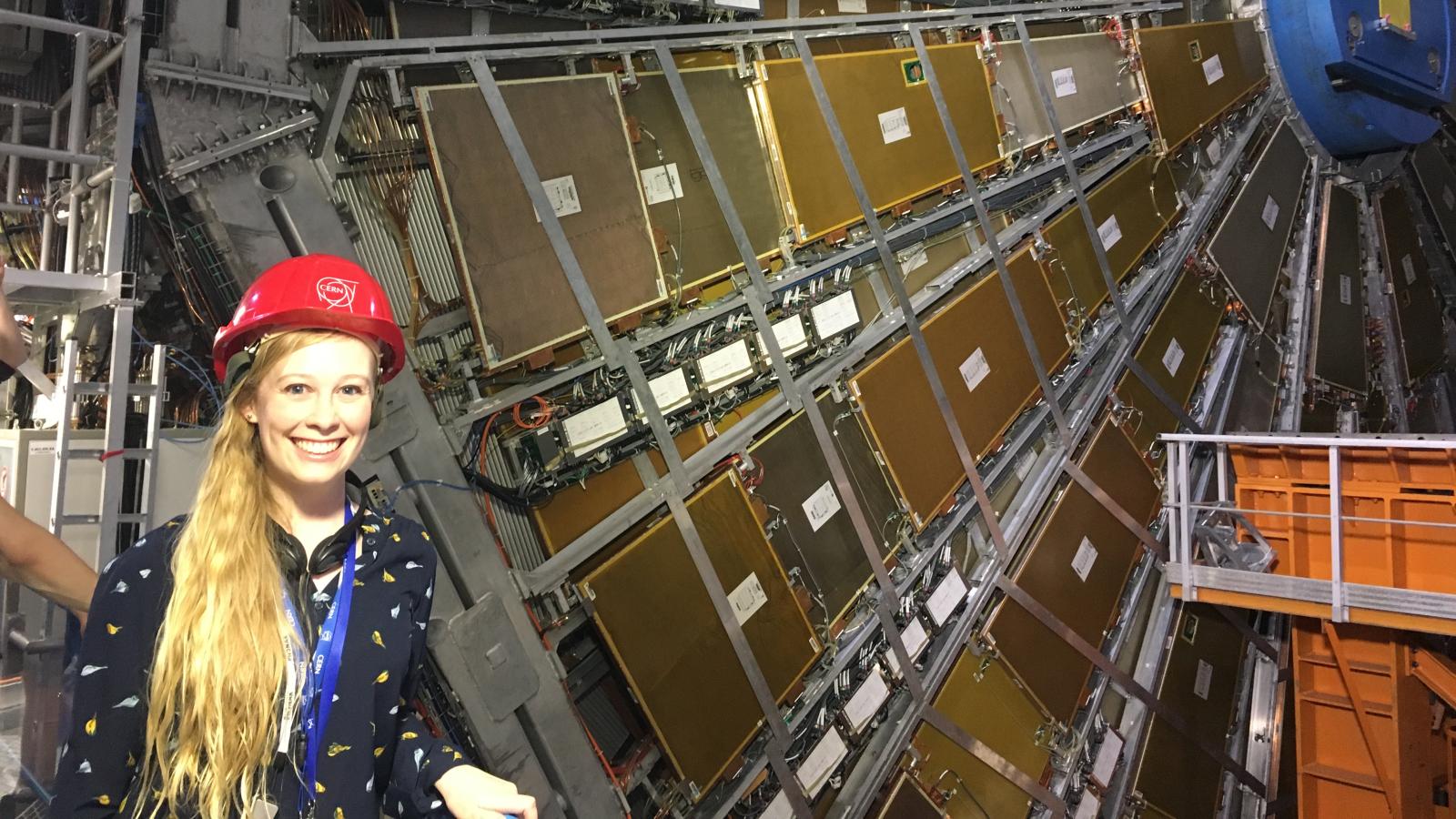 Stanford PhD candidate Jannicke Pearkes spends a lot of her time thinking about the ATLAS detector.

Usually, this is because she’s working on data analysis software for the giant detector, one of four multistory experiments studying particle physics at the Large Hadron Collider. But this past spring, it was for a different reason: art.

Pearkes has been working on the ATLAS experiment for about seven years, starting as an undergraduate. Part of her research has focused on a new section of the detector’s innermost tracker, currently being assembled at nearby SLAC National Accelerator Laboratory.

In addition to her research, Pearkes spent the last few months brainstorming, designing and assembling an art project she calls the “Disco-tracker” for a class at Stanford’s Hasso Plattner Institute of Design.

The class is meant to give PhD students from various disciplines experience using principles of design thinking, a problem-solving process that centers the needs and aims of an audience in developing solutions through creative thinking, prototyping and testing.

“I kind of signed up for it on a whim,” Pearkes says. “The idea was to push your boundaries in terms of creative thinking about your research.” 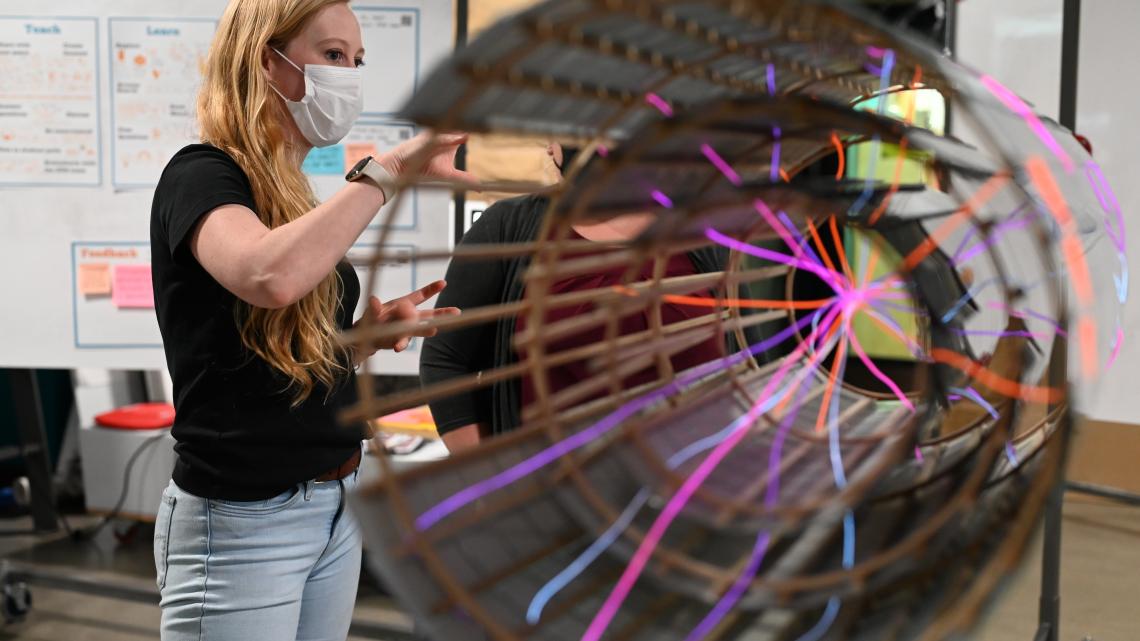 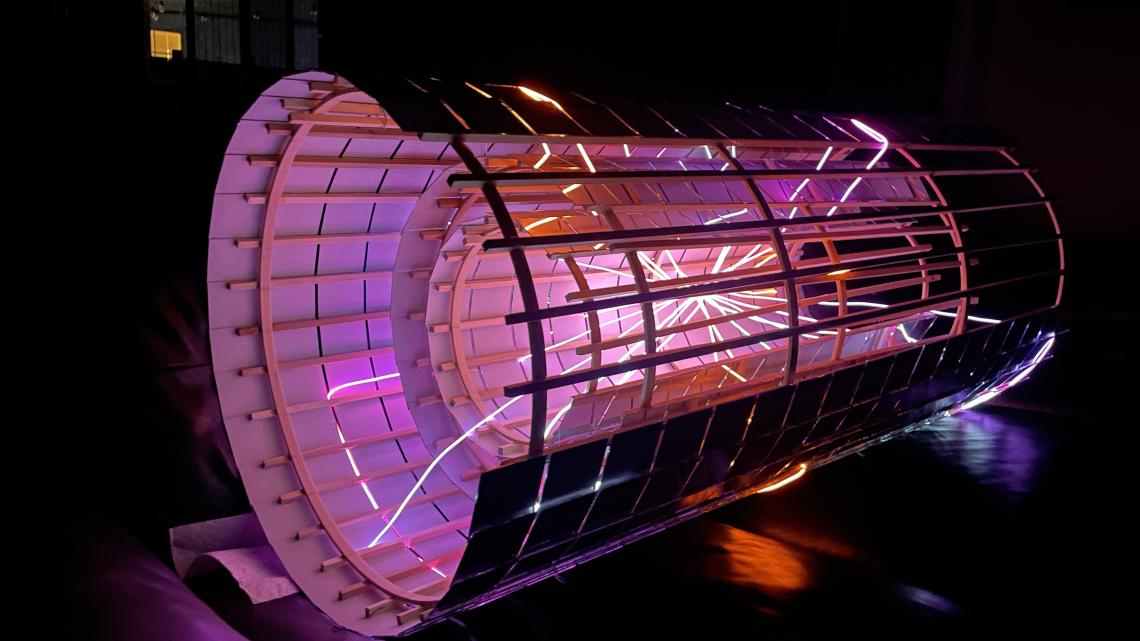 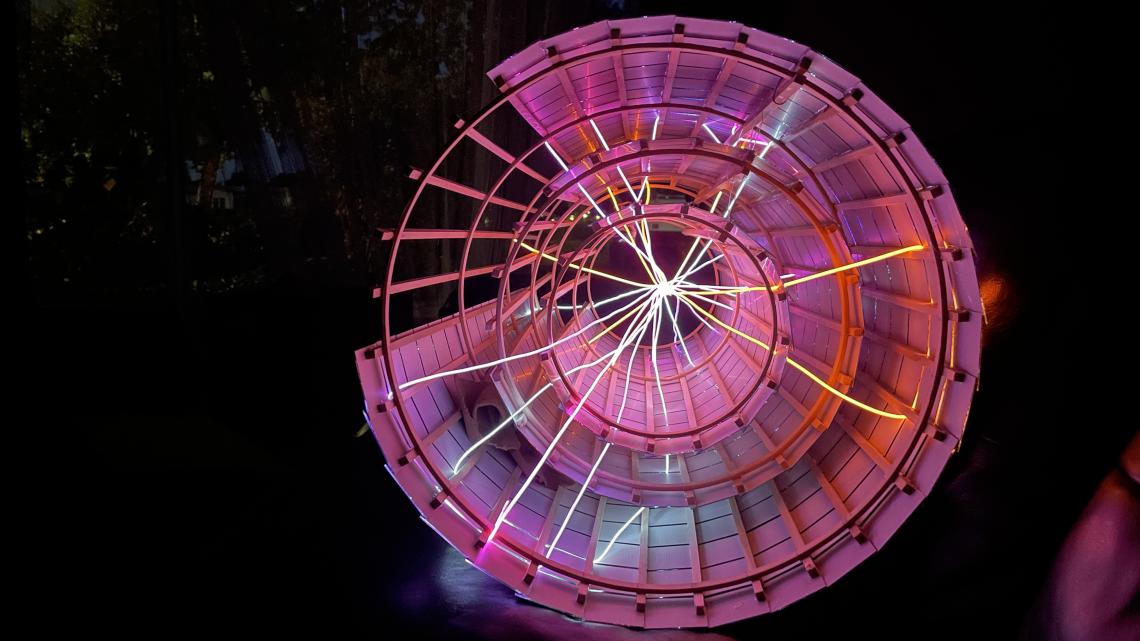 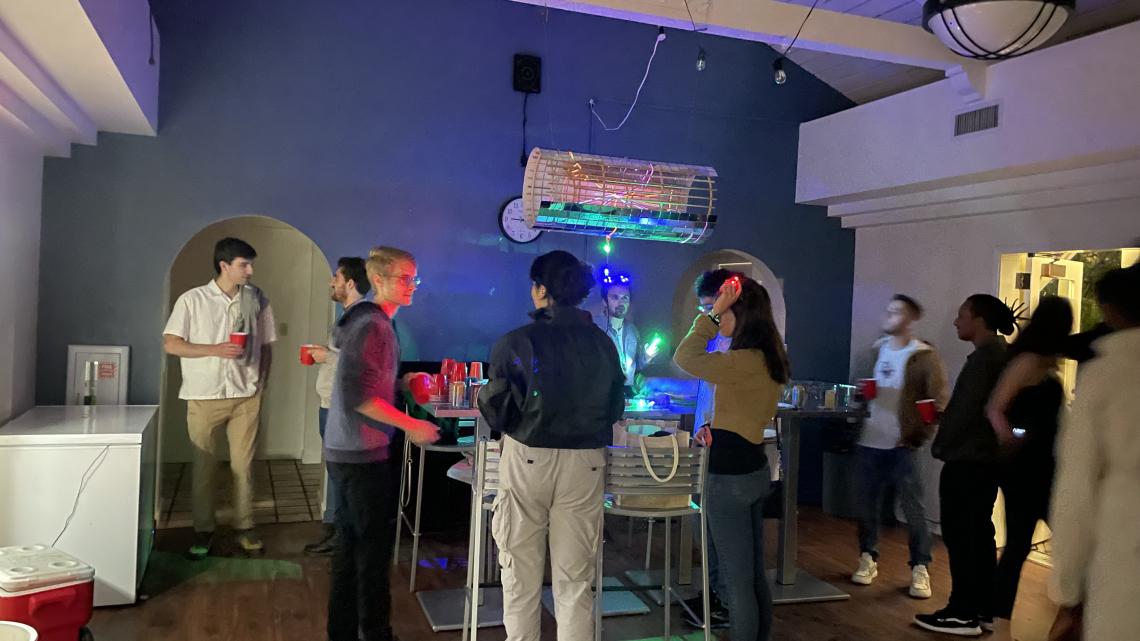 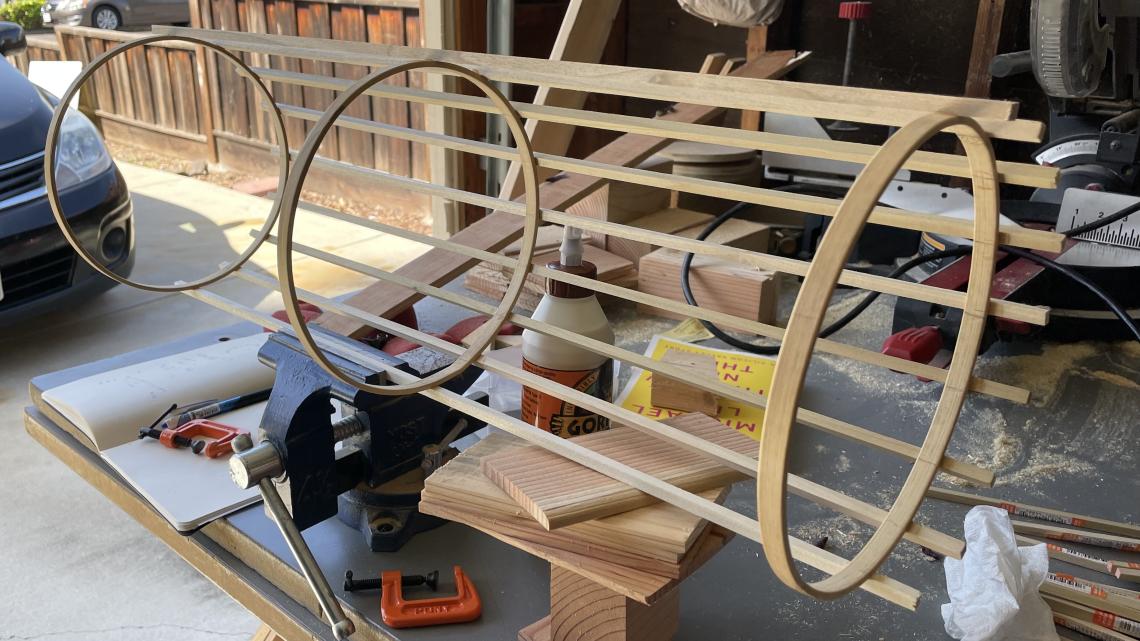 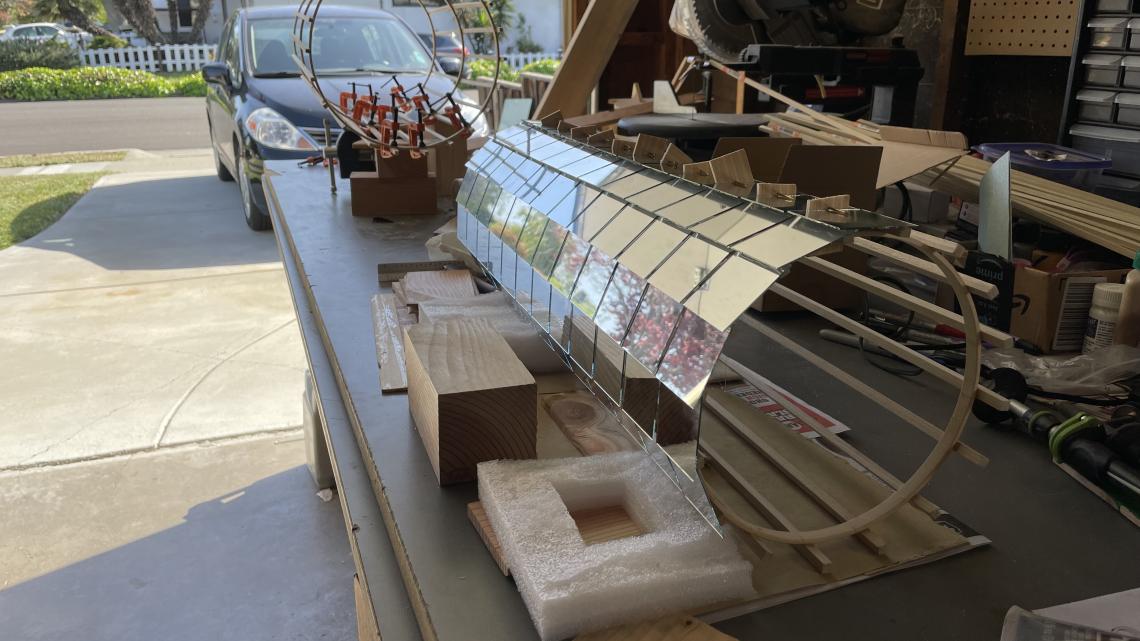 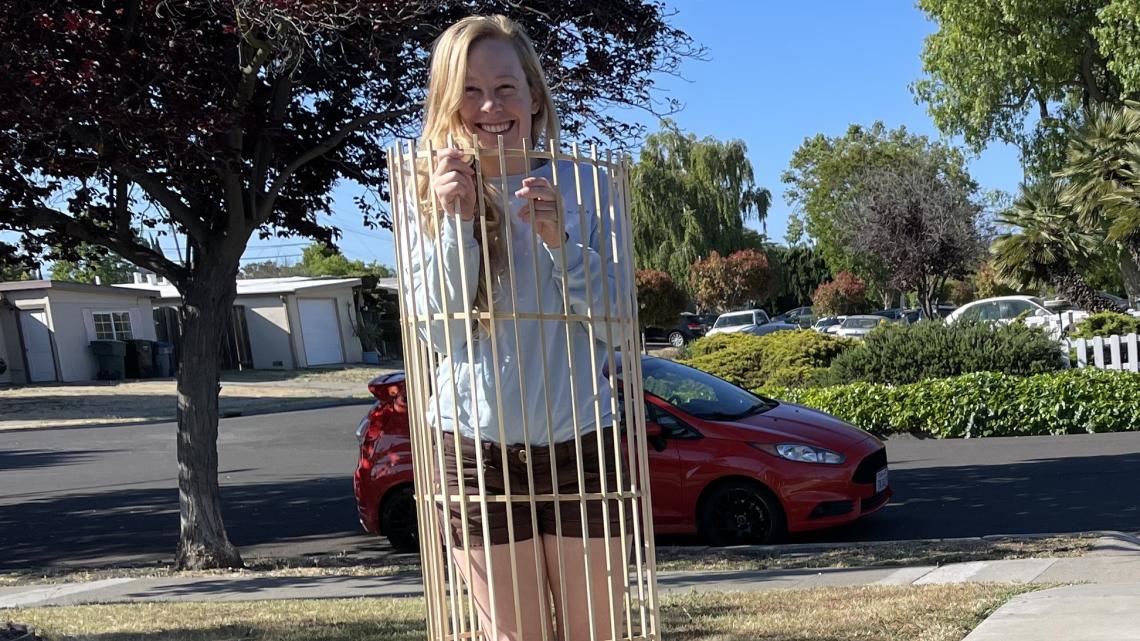 Photo by Jannicke Pearkes
Previous Next

With classmates, Pearkes brainstormed ideas for a project related to the ATLAS experiment. Possible ideas ranged from the educational—such as persuading a student to pursue a PhD and explaining the ATLAS detector to a non-scientist—to the more fantastical—such as designing a cult centered on the Higgs boson.

When Pearkes explained the ATLAS inner tracker to her classmates, she described it as a giant cylindrical disco ball. Thus the idea for a “Disco-tracker” art installation was born.

The real ATLAS inner tracker, which will lie at the center of the 7,000-ton ATLAS detector, is more than 6 feet high and 20 feet long. It is made up of multiple layers of concentric cylinders with silicon sensors, which are the very first part of ATLAS to actually “see” particles produced during collisions.

For her art project, Pearkes built three cylinders with wooden hoops and rods and arranged them in concentric layers. The outer tube is big enough that Pearkes can stand inside of it.

To represent the silicon sensors, Pearkes hand-glued to the Disco-tracker 822 2-inch mirrors.

Pearkes, who does most of her work on a computer these days, says the project foiled her previous efforts to get out of such activities. Part of the assembly for the real detector at SLAC involves gluing sensors to the new pieces of the inner tracker. “I really did my best to avoid working in the cleanroom during my PhD and to avoid doing any of the glue work,” she says.

To represent the tracks that particles leave when they are detected by sensors in the inner tracker, Pearkes strung electroluminescent wire through the gaps between the mirrors.

In the dark, the finished model looks like a contained firework, with glowing, multicolored wires stretching in all directions.

“Once I started getting to the end,” Pearkes says, “I was like, ‘This is pretty cool, there might be a wider audience that’s interested in it.”

In addition to presenting the Disco-tracker at a class exhibition, Pearkes also shared her work on Twitter, where it attracted attention from across the physics community. “In general, the response was very positive,” she says.

Pearkes’ advisor at Stanford, Caterina Vernieri, says she is impressed with Pearkes’ creativity. “The first message of this art piece is to educate people in a nice way how tracker detectors work and what we’re building here at SLAC,” she says. “And then the fact that it does that so beautifully—it actually shows that you can make something beautiful out of something ordinary.”

Vernieri says the project fits well with Pearkes’ interest in communicating with the public. “I didn’t see the art coming, but I’m not surprised about her dedication to outreach. She’s keen on finding new ways of explaining our research to those who are not experts.”

As for future physics-inspired art projects, Pearkes has a few ideas.

“My next plan is to make some earrings related to the particular process that I study,” she says. “But that’s a lot smaller and a bit less time intensive” than the Disco-tracker.

Whatever she works on next, Pearkes says she will take with her the new ways of thinking about and approaching research the class exposed her to. “One of the things that I learned from this course is not to shoot ideas down right away,” she says. “I consider myself a very practical person… but one of the key points was that when you want to be creative, it’s really important to put all of your practical feelings away for a bit and be open to new ideas. I’ve been trying to apply that outside of the course and in my own research.” 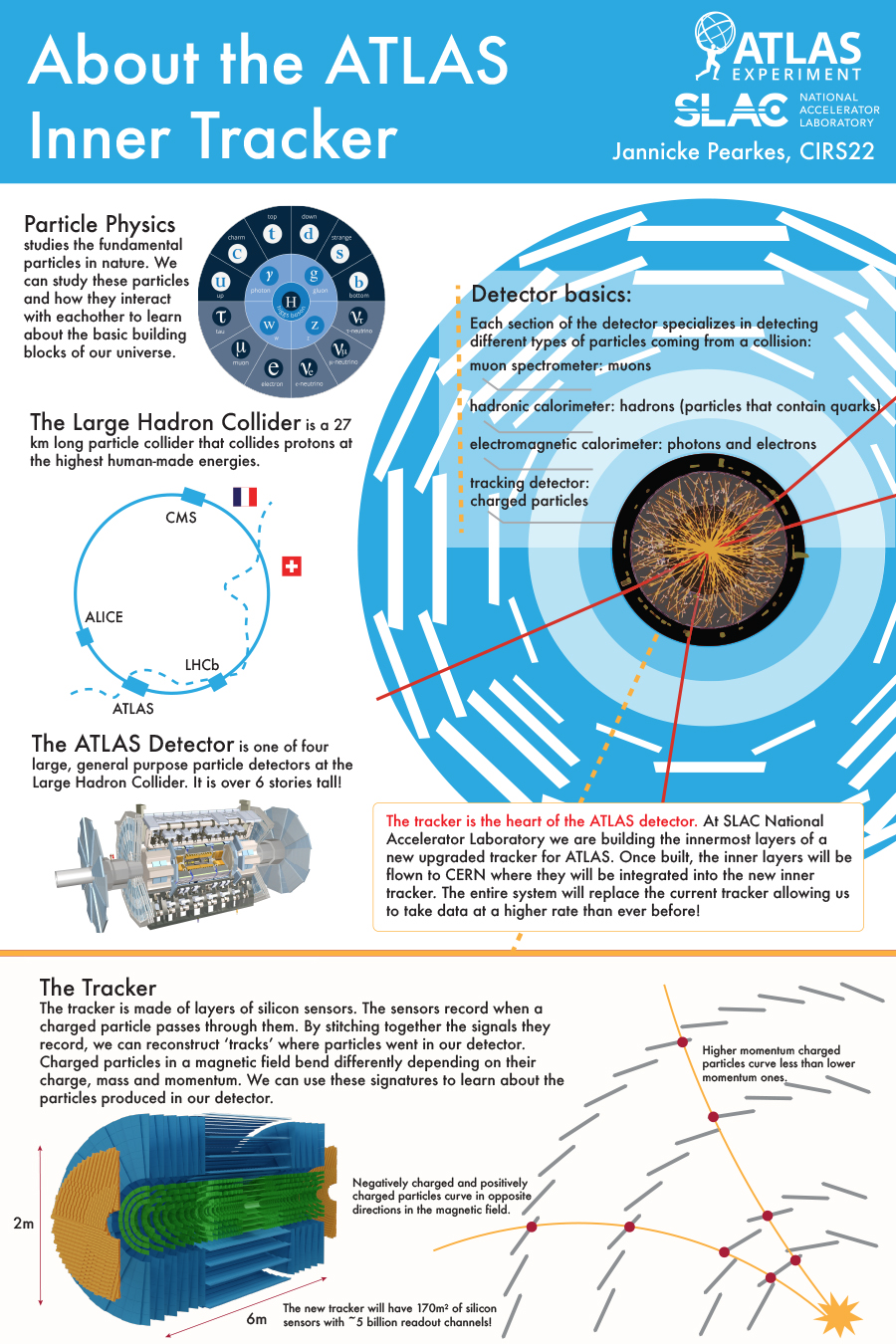 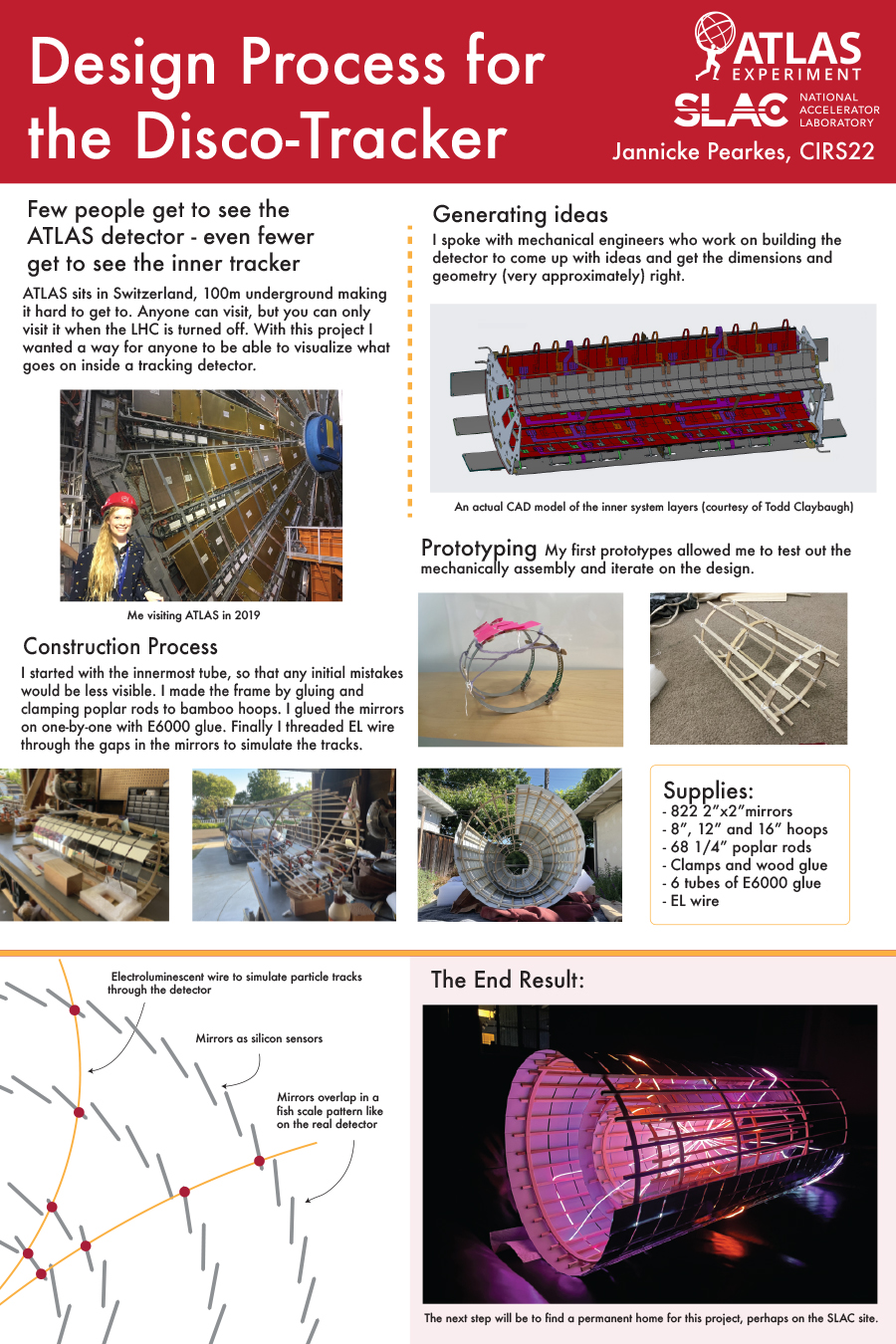 Courtesy of Jannicke Pearkes
Follow
Use your browser’s print dialog box to create a pdf.