On April 1 the dome of the Mayall Telescope near Tucson, Arizona, opened to the night sky, and starlight poured through the assembly of six large lenses that were carefully packaged and aligned for a new instrument that will launch later this year.

Just hours later, scientists produced the first focused images with these precision lenses—the largest is 1.1 meters in diameter—during this early test spin, marking an important “first light” milestone for the Dark Energy Spectroscopic Instrument, or DESI. This first batch of images homed in on the Whirlpool Galaxy to demonstrate the quality of the new lenses. 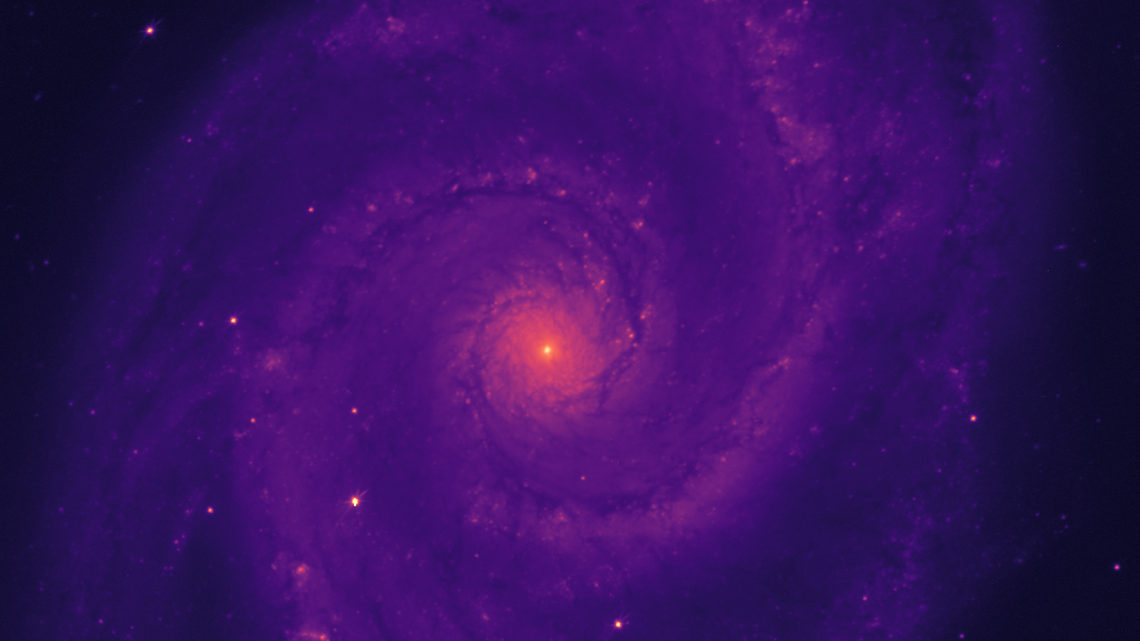 An r-band filter was used to capture the red light in DESI’s "first light" image of the Whirlpool Galaxy, Messier 51.

“It was an incredible moment to see those first images on the control room monitors,” says Connie Rockosi, who is leading this early commissioning of the DESI lenses. “A whole lot of people have worked really hard on this, and it’s really exciting to show how much has come together already.”

This phase of the project will continue for about six weeks and will require the efforts of several onsite scientists and remote observers, notes Rockosi, a professor of astronomy and astrophysics at UC Santa Cruz.

When completed later this year, DESI will see and measure the sky’s light in a far different way than this assembly of lenses. It is designed to take in thousands of points of light instead of a single, large picture.

The finished DESI will measure the light of tens of millions of galaxies reaching back 12 billion light-years across the universe. It is expected to provide the most precise measurement of the expansion of the universe and provide new insight into dark energy, which scientists explain is causing this expansion to accelerate.

DESI’s array of 5000 independently swiveling robotic positioners, each carrying a thin fiber-optic cable, will automatically move into preset positions with accuracy to within several microns (millionths of a meter). Each positioner is programed to point its fiber-optic cable at an object to gather its light.

That light will be channeled through the cables to a series of 10 devices known as spectrographs that will separate the light into thousands of colors. The light measurements, known as spectra, will provide detailed information about objects’ distance and the rate at which they are moving away from us, providing fresh insight about dark energy.

DESI’s lenses are housed in a barrel-shaped device known as a corrector that is attached above the telescope’s primary mirror, and the corrector is moved and focused by a surrounding device known as a hexapod. Fermi National Accelerator Laboratory researchers led the design, construction and initial testing of the corrector barrel, hexapod and supporting structures that hold the lenses in alignment.

“Our entire team is pleased to see this instrument achieve first light,” says Gaston Gutierrez, the Fermilab scientist who managed this part of the project. “It was a great challenge building such large devices to within the precision of a hair. We're happy to see these systems come together.”

The giant corrector barrel and hexapod, which together weigh about 5 tons, must maintain alignment with the telescope’s large reflector mirror that is 12 meters below, all while compensating for the movement  of the telescope’s assemblage of massive components as it swings across the sky.

“This is a big step up. It’s a leap into the future for the Mayall Telescope that will enable exciting new scientific discoveries,” says Michael Levi, DESI’s director and a physicist at the Department of Energy’s Lawrence Berkeley National Laboratory, the lead institution in the international DESI collaboration. “The team has been working on the new corrector for the past five years, so it was quite an experience seeing $10 million of optics lifted by the crane during installation.”

The new set of lenses expands the telescope’s viewing window about 16 times, enabling DESI to map about one-third of the visible sky several times during its five-year mission.

The Making of the Largest 3D Map of the Universe