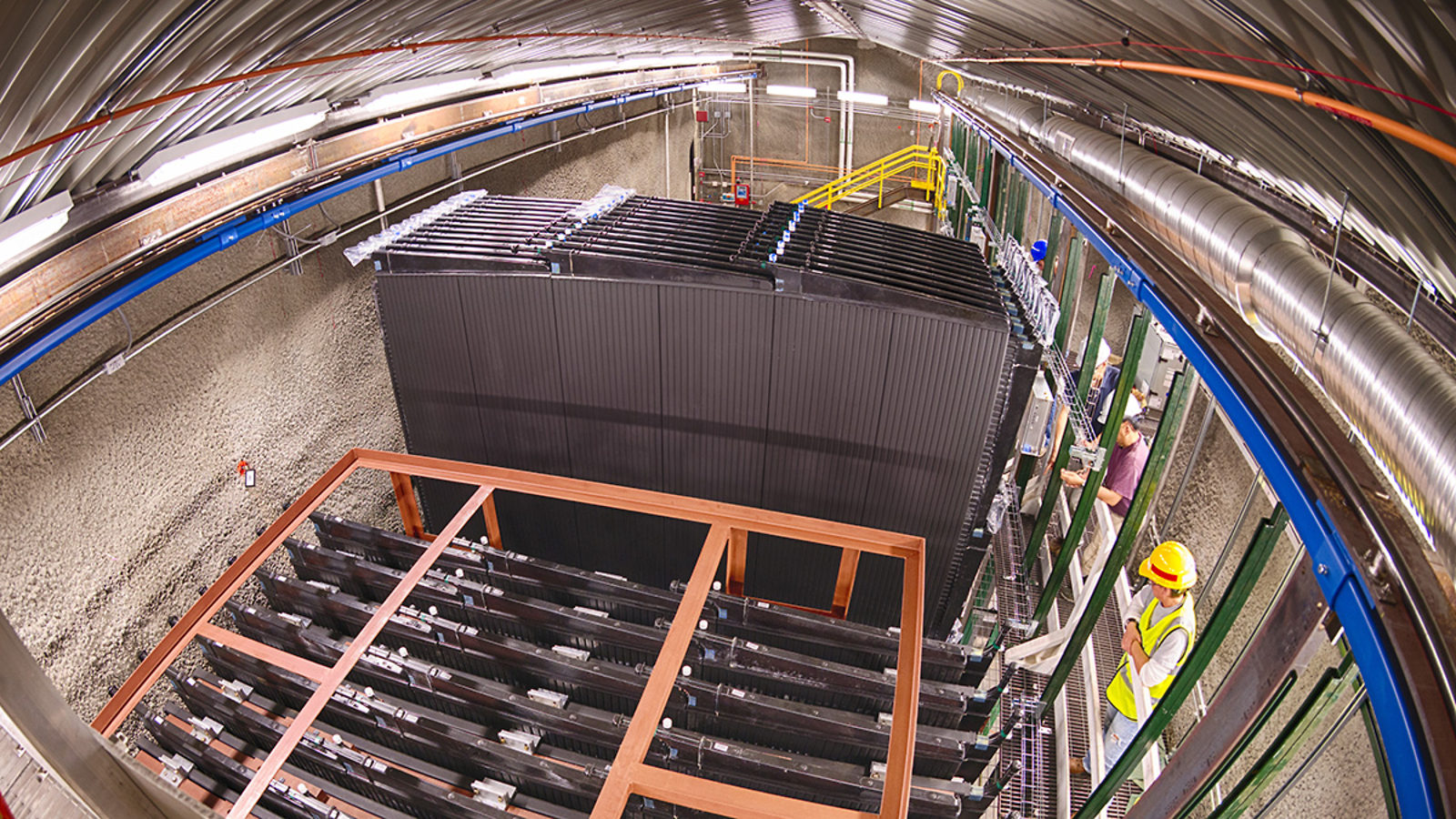 A close look at the assembly of the NOvA near detector reveals a massive yet meticulous process.

When the sun rises over Fermi National Accelerator Laboratory each morning, it beams down on a relatively unchanging landscape: 10 square miles of prairie dotted with various lab buildings. On most days, not much stirs that early in the morning. Some days, though, the sunrise coincides with a big event at Fermilab: NOvA block moving day.

NOvA is Fermilab’s largest neutrino experiment. It features two large detectors, one of which is located at Fermilab and is made up of eight 23,411-pound plastic blocks each measuring about 15 feet high, 15 feet wide and 6 feet thick.

Those involved in a NOvA block moving day wake up very early so they can complete the move before the end of the day. They try to avoid what would be a race against the sun since their work is meticulous and there is no room for error.

“These blocks are not redundant,” says Fermilab scientist Ting Miao, the project’s manager. “If one gets damaged in the move, there’s no way to replace it—by design. It’s really a one-shot business.”

The NOvA experiment studies subatomic particles called neutrinos by sending the world’s most intense neutrino beam from Fermilab to a detector on site (called the near detector) and to another, larger detector (called the far detector) located just shy of the Canadian border. No special tunnel is needed for the neutrinos to travel this distance since they pass undetected through matter all the time.

Neutrinos currently baffle scientists in that they morph from one type to another. By studying the morphing of one type of neutrinos, muon neutrinos, to another type, electron neutrinos, NOvA experimenters hope to better understand the function of these invisible particles.

That’s where the NOvA blocks come in. These scoreboard-sized plastic blocks are designed to hold liquid scintillator, a chemical made up of 95 percent mineral oil and 5 percent pseudocumene, which is imperative to the neutrino-detecting process. Liquid scintillator has extraordinary properties: When light shines on it, it gets much brighter. In the NOvA detector, a device called an avalanche photodiode will convert that light to an electronic signal that physicists can read with special electronics. This means that when a neutrino interacts with the detector, scientists will be able to measure the energy of that interaction and study it.

The first block of the NOvA near detector was installed in August 2013, and the last will be installed this month.

When modules for the blocks arrive at the assembly hall at Fermilab—27 of these PVC slabs comprise one block—skilled technicians gently clean them off and use a big yellow vacuum suction lifter to pick one up and take it over to a complex-looking glue machine. The rubbery suction cups that enable the vacuum to lift such heavy loads are custom-made, out of mostly silicon, for NOvA at Argonne National Laboratory.

“A green light on the fixture tells the technician when he’s got a good vacuum,” explains Dervin Allen, who oversees the block assembly.

When all is in place, the machine heats up, spraying glue down from 55-gallon barrels all along the module’s smooth, white surface.

Allen, who says he is immune to the heavy scent of glue pervading the assembly hall, says the glue comes two parts, adhesive and activator, that are pumped into clear plastic tubes called stirrers. A coiling white tendril inside the stirrer, like a flat corkscrew, blends the two together at the opportune moment so the glue doesn’t harden too soon and gum up the machine.

When the module is completely coated with glue, it is flipped over and placed carefully on a stack of completed modules. A technician sets heavy metal plates on top of them for 20 minutes to help set the glue. This stack will eventually form the “block.” While that module dries, the team moves on to the next one.

One might wonder why pieces as critical as these blocks would be made out of such seemingly simple materials: plastic and glue.

According to Miao, if the blocks were metal, the metal’s atoms would interfere with the experiment’s function by setting off additional interactions, while plastic would result in only minimal interactions. Plastic is also lightweight, low-cost, and can be molded or bonded together—with something as straightforward as glue—in a way that is watertight.

“With the lightweight plastic material as a container for the liquid scintillator, the NOvA detector is close to 100 percent active, volume-wise,” he says, explaining that an “active” or “smart” material is one that can withstand a variety of reactions. “And these days, plastic can be made very strong. This plastic is a specially designed type of PVC. It has to hold tons of material. Aluminum or steel could do that, but it would be too heavy, among other things.”

NOvA’s plastic detectors will be the largest of their kind, he says.