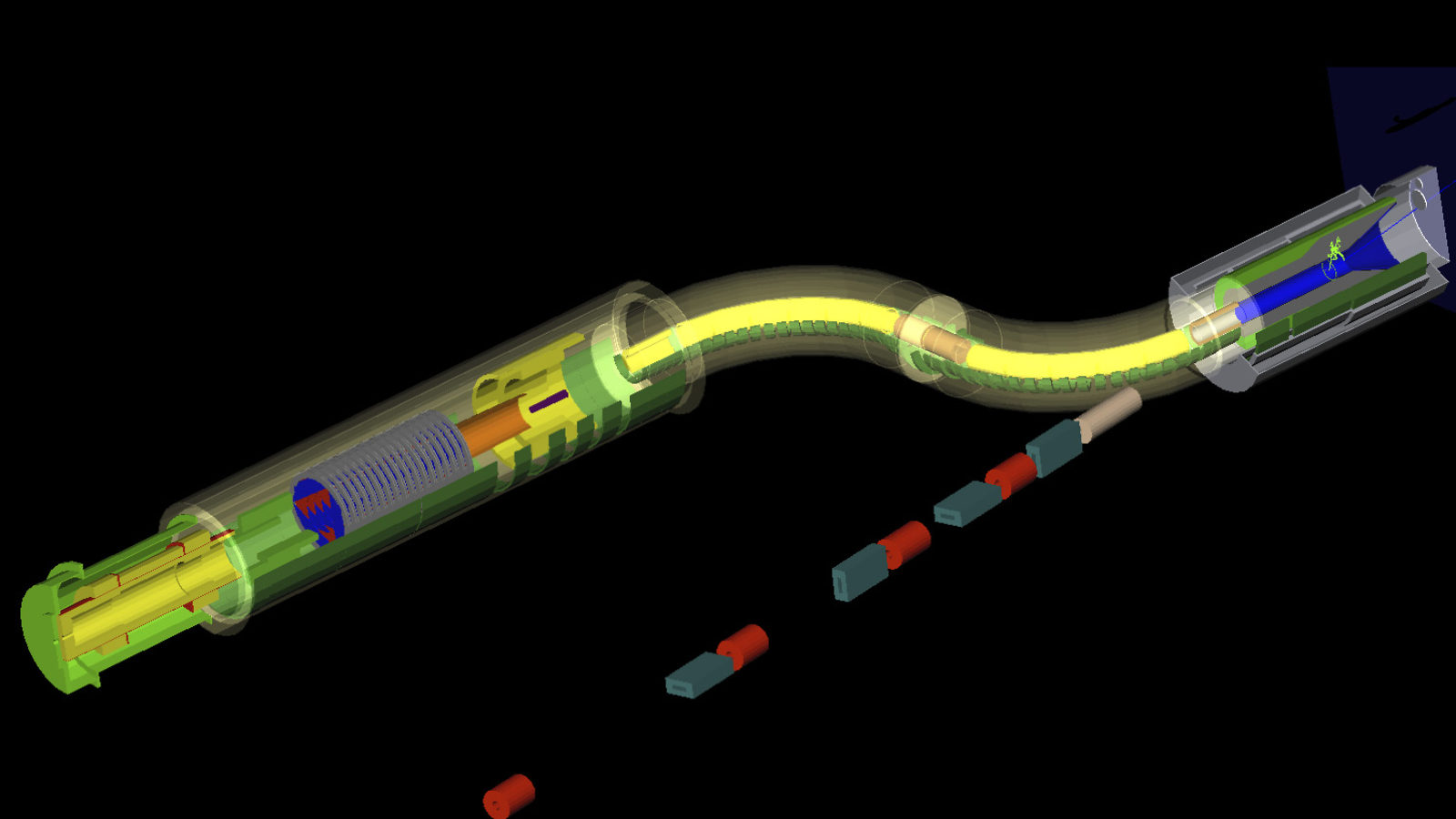 Fermilab’s Mu2e experiment is unlike anything ever attempted. So when the collaboration needed a first-of-its-kind magnet prototype built, they turned to an institution known for its magnet expertise: the Genoa section of the Italian Institute for Nuclear Physics, or INFN, located in the University of Genoa in Italy.

Earlier this year, INFN-Genoa became the sixth Italian institution to join the Mu2e collaboration, which now sports more than 150 members from 28 labs and universities in the United States, Italy and Russia. The team of magnet experts there has decades of experience working on high-energy physics experiments—they helped design and build magnets for BaBar at SLAC and, more recently, the CMS detector at CERN.

Now they’re putting that knowledge toward building prototypes of the years-in-development magnets that will be used for for Mu2e, an experiment intended to study whether charged particles called leptons can change from one type to another. According to Doug Glenzinzki, the deputy project manager for Mu2e, the experiment’s goal is to narrow down the possibilities for completing physicists’ picture of the universe, by amassing evidence for one theory over others.

“We know the Standard Model is incomplete,” Glenzinski says. “The number one goal of particle physics is to elucidate what a more complete model looks like. There are a lot of theories, and we are looking for data that tells us which is right.”

It turns out, Glenzinski says, “charged lepton flavor violation”—the phenomenon Mu2e is being built to study—is a powerful way of discriminating between possible models. Seeing this violation would also open up new questions about a theory of nature that has stood for 80 years. In short, this experiment could point the way toward the future of particle physics.

Mu2e will use a 92-foot-long detector with a unique design. It will be built in three sections, each its own superconducting solenoid, which is a set of electromagnetic coils that generates the particular magnetic fields required for the experiment. The detector consists of a production solenoid, a detector solenoid and a snake-like transport solenoid connecting them. Fermilab’s accelerators will fire a beam of protons into the production solenoid, where they will strike a target to produce pions. It’s the job of the transport solenoid to winnow down that beam of pions as it moves through, herding negatively charged muons to the detector solenoid and sending other unwanted particles out of the way.

The Mu2e apparatus includes a detector solenoid, a transport solenoid and a production solenoid.

The transport solenoid—a 42-foot-long curved pipe—will use 50 different magnets to accomplish this. The Genoa team will build prototypes of these magnets, working from years of design and engineering by Fermilab’s Technical Division, an effort led by Giorgio Ambrosio, Mike Lamm and Tom Page.

Pasquale Fabbricatore is one of the leaders of the Genoa team—he worked on both the BaBar and CMS magnets. He says that though the Mu2e magnets will use similar technology to large detector magnets, their unusually small size—about 6.5 feet in diameter—makes applying that technology tricky.

“Superconducting magnets are so particular that each one is a prototype,” Fabbricatore says. “Each unique magnet has unique problems.”

For example, Fabbricatore says, the prototype magnet will consist of a module containing two electromagnetic coils, installed close together through a shrink-fitting operation. While placing the first one should be easy, he says, warming the second coil up to the right temperature to install it without damaging the first could prove to be difficult.

“This is a problem we have never encountered before,” he says.

INFN-Genoa is just the latest Italian institution to join the Mu2e team. Glenzinski says the experiment has received strong support from Italy since the project’s inception. Italy is now contributing to Mu2e with four INFN groups from Frascati, Pisa, Udine and Lecce. It also leads the building of the calorimeter system, which helps measure the momentum of electrons and identify background signals. Glenzinski says the Genoa group makes a fine addition to a growing collaboration.

“Pasquale and his team are world-class magnet experts,” Lamm says. “They’re a great addition to the Mu2e collaboration and we’re excited to have them join us.”

The work on the new magnet began in September, and Fabbricatore says the prototype will be delivered to the collaboration in July 2014. Glenzinski says that fits the experiment’s timeline nicely. The collaboration will test the prototype, then send it out to a vendor to create the 50 magnets needed for the project. Assembly of the Mu2e detector should begin in 2016, with the experiment ready to take data by the end of 2019. 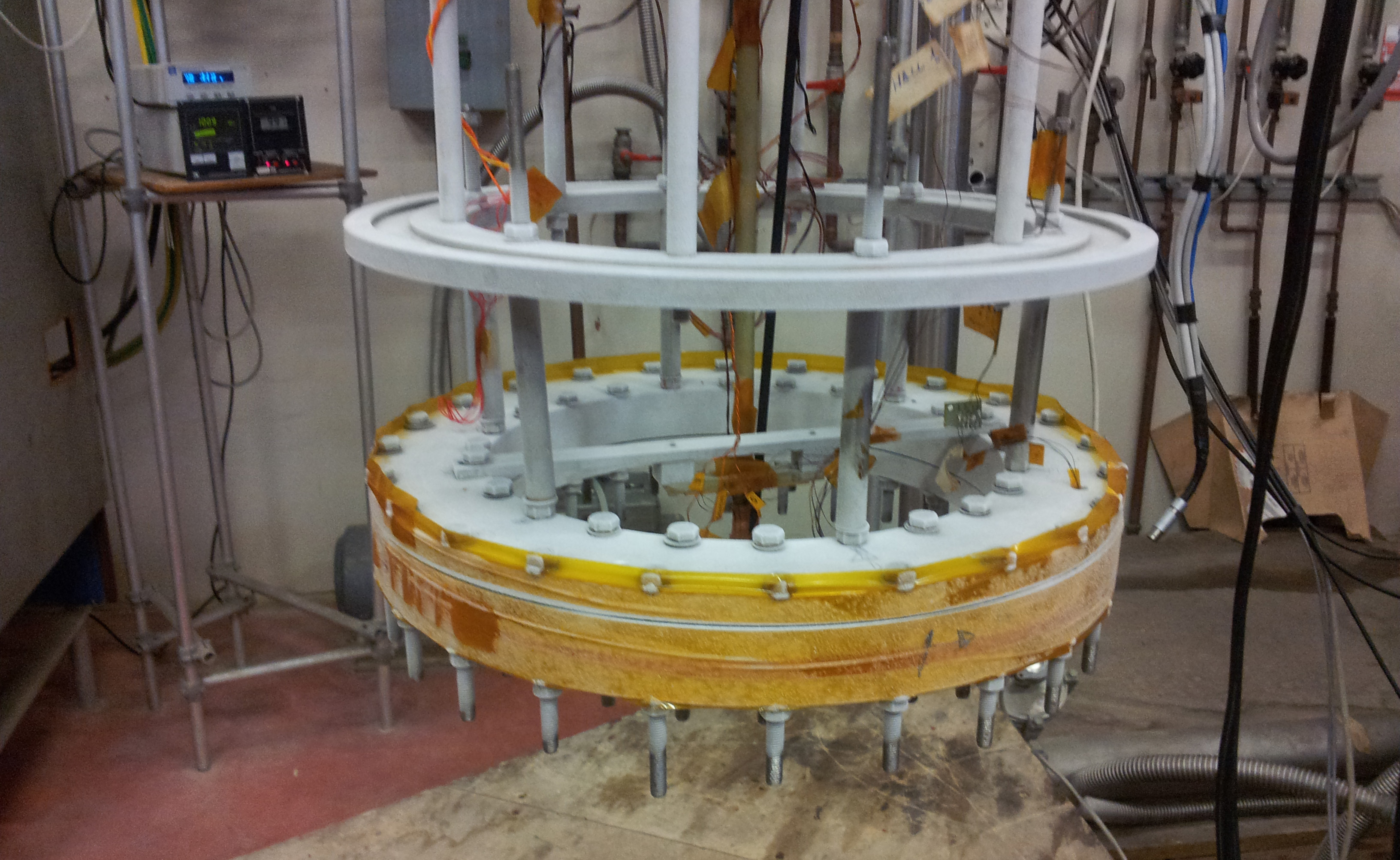 This sample holder is used to test the prototype conductor for the Mu2e experiment's transport solenoid.

INFN-Genoa Mu2e Collaboration
Like what you see? Sign up for a free subscription to symmetry!
Follow
Use your browser’s print dialog box to create a pdf.
Latest news articles
Event Horizon Telescope