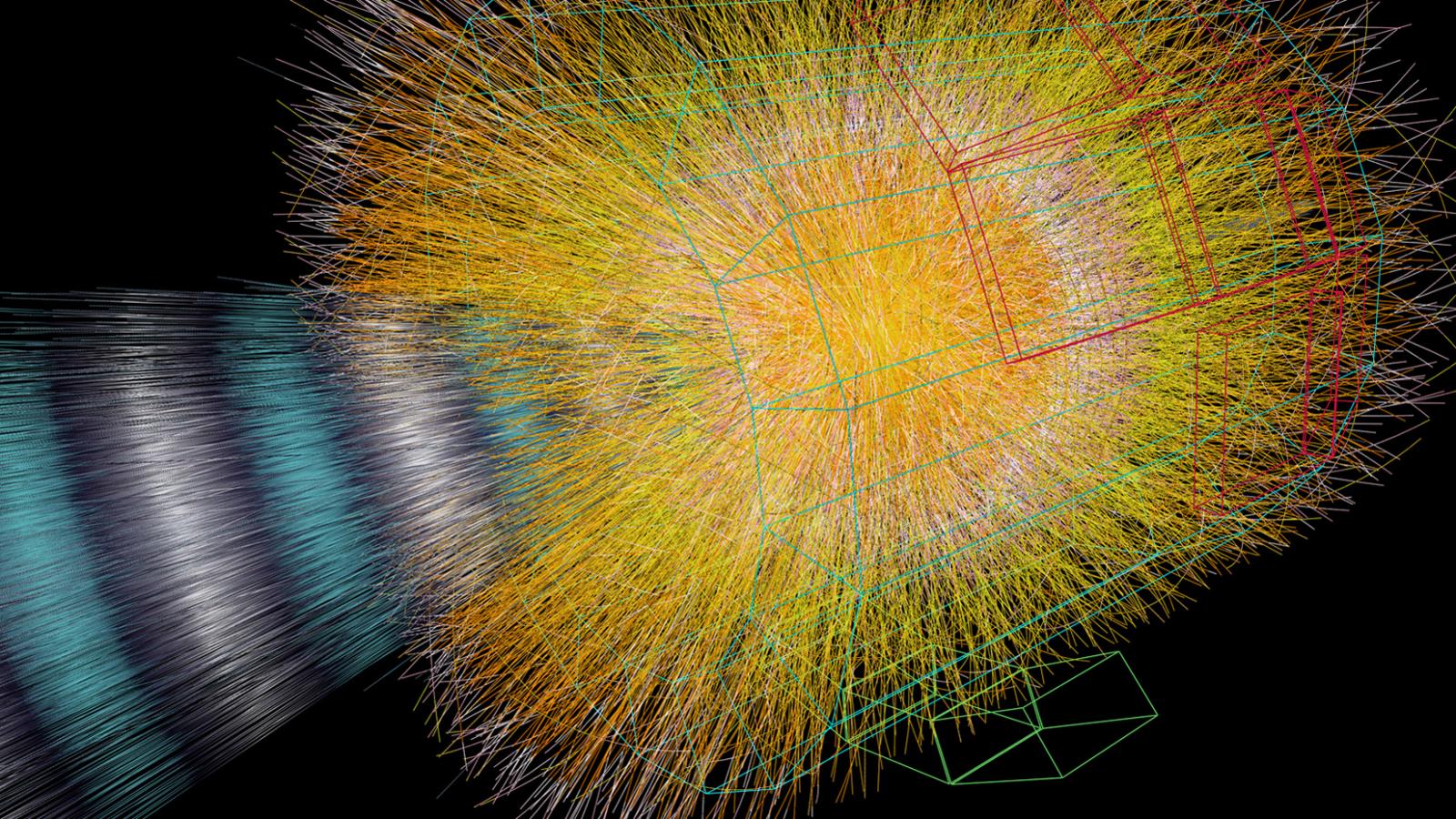 Protecting the LHC from itself

Scientists at CERN have crafted the world’s most sophisticated machine protection system to save the LHC from itself.

Human safety is always the first concern at the Large Hadron Collider. But the machine also needs shielding from its own proton beams, which each pack the energy of a high-speed train.

When people talk about the super-high energies of proton collisions in the Large Hadron Collider, it’s easy to envision a series of explosions—pop, pop, pop—that give off flashes of light and shake the room.

Not so. Even though the protons are hurtling along at nearly the speed of light, each one is so tiny that when it smashes head-on into another, the collision releases just a puff of energy, in ordinary human terms—about 30 trillionths of the energy a 60-watt light bulb puts out in a second. Still, this is so much more energy than any collider has achieved before that scientists expect to see exciting new physics in the debris.

But the proton beams themselves are another matter. Each beam contains 280 trillion protons with the combined energy of a high-speed train going 200 kilometers per hour, squeezed into a stream much thinner than a human hair. They’ll race around a circular ring 11,245 times per second, year after year, inside one of the world’s largest, most sensitive, and most complex machines.

The beams throw off billions of stray particles that will heat up anything they hit, and they pass within about a centimeter of thousands of superconducting magnets that have to be kept colder than the vacuum of outer space. If stray particles damage the magnets or other sensitive equipment, the collider could be forced to shut down for weeks, months, or more. And if the beam veers ever so slightly off, parts of the $8.7 billion machine—by far the most powerful accelerator ever built—would be destroyed.

Just as scientists at CERN, the European particle physics lab in Switzerland, have taken elaborate precautions to make sure the beams don’t harm people, they’ve also had to craft the world’s most sophisticated machine protection system to save the LHC from itself. The system shields the LHC’s 9000 magnets from the beams and from themselves; traps stray particles so they don’t damage critical components; and safely disposes of the beams—and their formidable energy—when necessary.

To harness the powerful beams of protons and steer them around the ring, scientists have to create strong magnetic fields. This requires superconducting electromagnets, whose wire coils can carry large electric currents with virtually no resistance. For the wire to become superconducting, the magnets must be kept very cold—in this case at a temperature of -271 degrees Celsius, close to absolute zero.

Together the LHC’s magnets store even more energy than the proton beams do—a whopping 10,000 megajoules, compared to 362 megajoules for the beams. Most of this energy is contained in 1232 superconducting dipole magnets, which do most of the work of beam steering.

While a beam of particles by itself creates very little heat, beam particles straying from the core of the beam will heat up surrounding material. It takes just a small number of beam particles hitting a magnet in one spot to raise the magnet’s temperature above a critical point, causing it to suddenly change from superconducting to “normal” conducting. This change, called a quench, releases the stored energy of the magnet and its neighbors; it can heat a small part of the magnet from -271 to 700°C (-456 to 1300°F) in less than one second.

“If we don’t do anything, all the stored energy will go into one magnet, and that magnet will be destroyed,” says CERN’s Rudiger Schmidt, coordinator of LHC machine protection. “We have to detect a quench and take action to put the energy somewhere that it’s not dangerous.”

When a quench begins, the beams are shut down and power to the affected magnet is immediately cut. Then heaters fire up, quickly raising the temperature of the whole 14.3-meter-long, 35-ton magnet and dissipating the energy.

Each dipole magnet is connected to 153 neighbors, and their energy also has to be immediately removed. A switch sends the energy into large resistors, where it heats eight tons of steel to a temperature of 300°C (570°F) in less than two minutes.

The LHC isn’t the first accelerator to face the danger of magnet quenches. Fermi National Accelerator Laboratory’s Tevatron collider, the first to use superconducting magnets, has faced this problem since it began operation in the late 1970s, followed more recently by the HERA accelerator at Germany’s DESY laboratory in Hamburg. Scientists learned from those accelerators how to deal with quenches. The scale of the LHC increases the challenge significantly, however: each of the LHC’s eight sectors is similar in size to one Tevatron.

Can quenches be prevented? Some, such as those caused by infinitesimal changes within the magnet, are unavoidable. But many quenches are due to the interaction of stray beam particles with the magnets. As the beam intensity increases, so does the number of quenches.

“It takes 30 minutes to five hours to restart the LHC after a quench,” says Schmidt. “If we quench 10 times a day, it’s too much. If we never quench, we’re being too conservative. We have to operate such that we don’t quench too frequently.”

But limiting the beam intensity shouldn’t be, and isn’t, the only solution. Keeping the stray beam particles from hitting the sensitive parts of the LHC is the task of the collimation, or beam cleaning, system.

The beams’ tightly focused cores are surrounded by a halo of stray particles generated by interactions between the two beams, small imperfections in any of the LHC’s thousands of sophisticated components, and a variety of other sources. With the high-intensity beams making 400 million trips around the LHC in a typical 10-hour beam lifetime, more than 500 billion particles may migrate from the core. The energy in the halo is enough to not only quench magnets, but to melt them.

“The parameters of the LHC beam are so high that microscopic effects can be very destructive to the machine and to the detectors,” says Nikolai Mokhov of Fermilab, a pioneering researcher in collimator systems who works on the LHC’s machine protection system.

One of the first advances in machine protection came in the late 1970s, when Fermilab’s Helen Edwards placed stainless steel shielding in front of the first superconducting magnets to protect them from stray particles. These collimators trapped the particles while allowing the beam’s core to pass through, and were the precursors of today’s complex collimator systems.

The LHC’s 100 collimators are strategically stationed in critical areas of the accelerator. No longer stationary blocks of steel, they are made of graphite composites, and they open and close automatically or at the request of accelerator operators.

Why use a light material like graphite, and not something heavy and seemingly impenetrable like lead? If the material were heavy, all the beam’s energy would concentrate in the first half meter of the block. Combine that with the lower melting point of a material like lead, and in short order your beam-dump block would become a beam-dump mess. Using a light, high-melting-point material like graphite ensures that the beam energy is distributed throughout the block, and that the block will last for the decades-long life of the LHC.

The art of dumping

Say a magnet quenches, too much beam goes off course, or—the most likely yet least dramatic scenario—the beams have lost too many protons during normal collisions and scientists need to load a fresh set. What happens to the old beams? Even at the ends of their usual 10-hour life spans they still hold 200 megajoules of energy that can't be sent just anywhere.

“This beam is not a danger by itself,” Schmidt says, “but the fact that it can deposit its energy in a tenth of a thousandth of a second makes it dangerous to the machine.”

When the time comes, the beams are extracted, or dumped, into two huge cylindrical blocks. Eight meters long, one meter in diameter, and made of graphite composites encased in concrete, they are the only thing that can withstand the full power of the beam. But first the beam has to be diffused, because in its compressed form it would drill a hole tens of meters long in any material.

So as the beams pass out of the LHC, they spread out and hit the blocks in a shape that resembles a cursive “e.” The dump takes just eighty-millionths of a second, dilutes the energy of the beam by a factor of 100,000 and heats the center of the lines that make up the “e” to almost 700°C.

In 2003, two-thirds of the superconducting magnets in the Tevatron’s six-kilometer ring quenched at the same time. The beam drilled a hole in one collimator and created a 30-centimeter groove in another. That accident, while serious, was the only one in the accelerator’s 20-year history, and the machine was back up and running within two weeks. Could something similar happen on a larger scale at the LHC?

“In a bad accident, the beam could go off course and drill a hole through one or two magnets.”

“In a bad accident, the beam could go off course and drill a hole through one or two magnets,” says Schmidt. While this would not destroy the LHC, it would still require time and money for repair. Replacing a dipole magnet, for which CERN has 30-40 spares, would take 30 days. A more complicated repair, or replacement of a less common component, would take longer.

“The beam at the LHC is 150 times more powerful, so the scale of the accident could be 150 times higher,” says Mokhov. “We want to guarantee that this will never, never happen at the LHC. Our goal is to design a system to exclude this type of accident completely.”