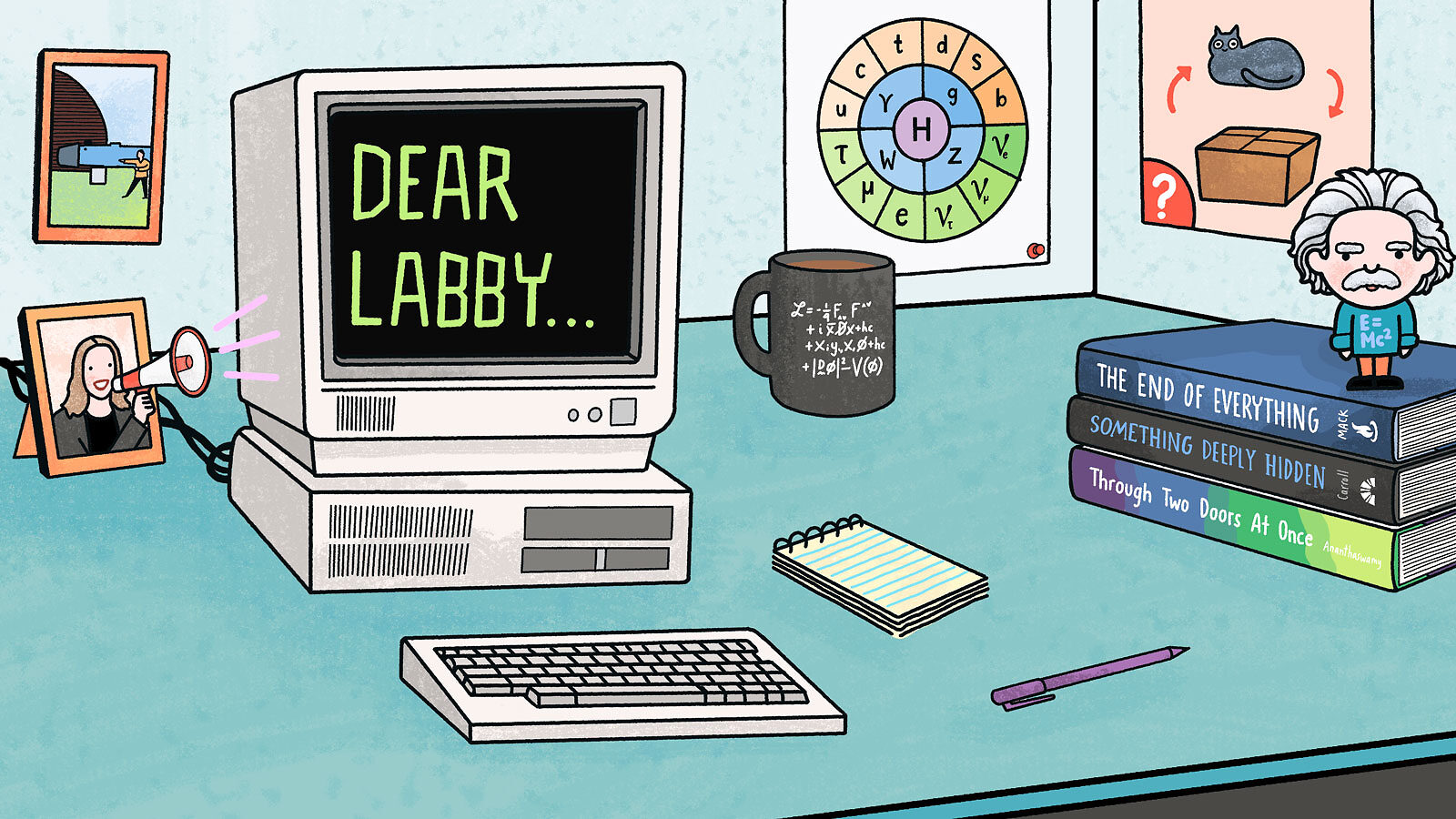 For some science-minded individuals, self-help books are more alienating than enlightening. So today we offer an alternative: Symmetry writer Sarah Charley answers life and relationship questions through the lens of fundamental physics.

Instead of using analogies from elsewhere in life to explain science, she’ll use physics analogies to explore human nature.

Could you also use some physics-informed advice? Let us know via email or Twitter with the hashtag #AskDearLabby.

Every year I give my parents hints about what I want for Christmas (and sometimes when I’m lazy, I’ll just send them a link to the product). My mom gets it, but my dad inevitably buys me expensive gifts that are completely useless. He’s always very proud of his gifts, and I feel like I would be an ungrateful daughter if I returned them and got something I actually want. Should I just accept that I will always have a proliferating pile of presents I don’t know what to do with, or is it time to cash in on Christmas?

At the Large Hadron Collider, physicists convert the energy stored inside protons into all sorts of fabulous and interesting new particles. Does this mean that they are ungrateful to the original protons? No! It simply means that they are taking one thing and—through the power of E = mc2—transforming it into something else that is exciting and useful to their research.

Your dad is essentially supplying you with a bottle of protons, and it’s up to you to decide if you want to transform them into Higgs bosons (through the well-defined process of “returns and exchanges”). Sure, it’s a little more complicated than getting something you want in the first place, but ultimately it will lead to a more fulfilling and happy relationship if you can see his gifts not as burdens, but as opportunities.

Until recently, I had a 20-year vision for my life that revolved around becoming an MD-PhD. It was more than just a career path; it became my whole identity. I spent a decade preparing to become a physician-researcher. But now that I’m a few years into my final training program, I've come to the hard realization that I’m completely miserable. There are still things I love about research and clinical care—and even of the rigors of medical school. But after all the blood, sweat and tears, I feel like the person I want to be does not align with the person the MD-PhD program needs me to be. I keep hitting my head against the wall, thinking that maybe if I hit harder, I’ll have a breakthrough. But all I've done is exhaust myself. How do I know when it's time to change course? And if now is the time, how do I cope?

There is often a disconnect between the theories we hold about ourselves and our sincerest desires. Reconciling these theories with reality can be incredibly difficult and disheartening. But it is also the only way for us to discover a path that brings us grounding, purpose and happiness.

There's a beautiful theory in particle physics called Supersymmetry—SUSY for short. SUSY would solve nearly all the lingering problems in fundamental physics. But after decades of searching and generations of experimentation, physicists have yet to find proof that it exists. Physicists have had to take a cold, hard look at this theory and accept that what they started out looking for is not supported by the data. It might still be there, but not in its simplest form.

It appears as though you are at a similar crossroads.

Think of your thoughts and feelings as data. Do you get excited and inspired when you work on medical research? Or does it make you feel overwhelmed and despondent? Do you enjoy making rounds with patients? Or does it fill you with anxiety and dread? Data speaks louder than dreams. And even though it's hard to let go of a beautiful theory—a theory that has so much potential—if it's not there in the data, then it’s not there. Nature doesn't care about what we believe. Nature just is, and our inherent human natures are not so different.

Just like in physics, there will always be a small amount of uncertainty—that’s normal. Some theories can be nearly impossible to rule out completely. But by perpetually chasing after an ethereal ideal, we blind ourselves to all the other possibilities. If we can't look beyond our own assumptions, then we'll never know what inherent truths we might be missing. There could very well be a new version of this old dream just out of reach—but you’ll never discover it by trudging down the same path.

Your decade pursuing an MD-PhD was an invaluable experience. Now it’s time to update your model and follow the evidence towards a future that fills you with hope, happiness and purpose.

When I was a kid, my best friend was a neighbor named “Andy.” We did everything together and helped each other through some really tough times. As adults we moved away and then fell out of touch. The few times I’ve reconnected with Andy have been strained. During one get-together, he made an insensitive comment and then started yelling at my girlfriend when she called him out. (He has since apologized and acknowledged that she was right, but she still wants nothing to do with him.) During another recent meeting, he seemed totally uninterested in my life and spent the whole time bragging about how much money he has made with his new small business. We still have a good time together, but his behavior makes me question whether this childhood friend has any place in my life today. Should I keep investing in this relationship?

Figuring out the limits of a friendship can be really difficult, but perhaps looking at it through the lens of scientific modeling can take some of the anguish out of the process.

Newtonian mechanics is an incredibly useful model that can predict the motion of everything from rockets to rocking chairs. But when pushed to certain scales (such as for objects that are very small, like protons, or that are moving very fast, like satellites), Newtonian mechanics breaks down and yields erroneous and unhelpful results.

It appears as though your friendship with Andy also breaks down in certain areas of your life. As long as you keep things within a well-defined realm—focused on him and without any challenges—your friendship works pretty well. But when the relationship is put to the test, it falls apart.

Look at this friendship as a scientific model that served you well during your childhood but has a limited applicability in your more complex adult life. Even the best scientific models break down eventually, and acknowledging their limits doesn’t make them worthless or irrelevant. It just means that you need to think critically about when they add value, and when they don’t.