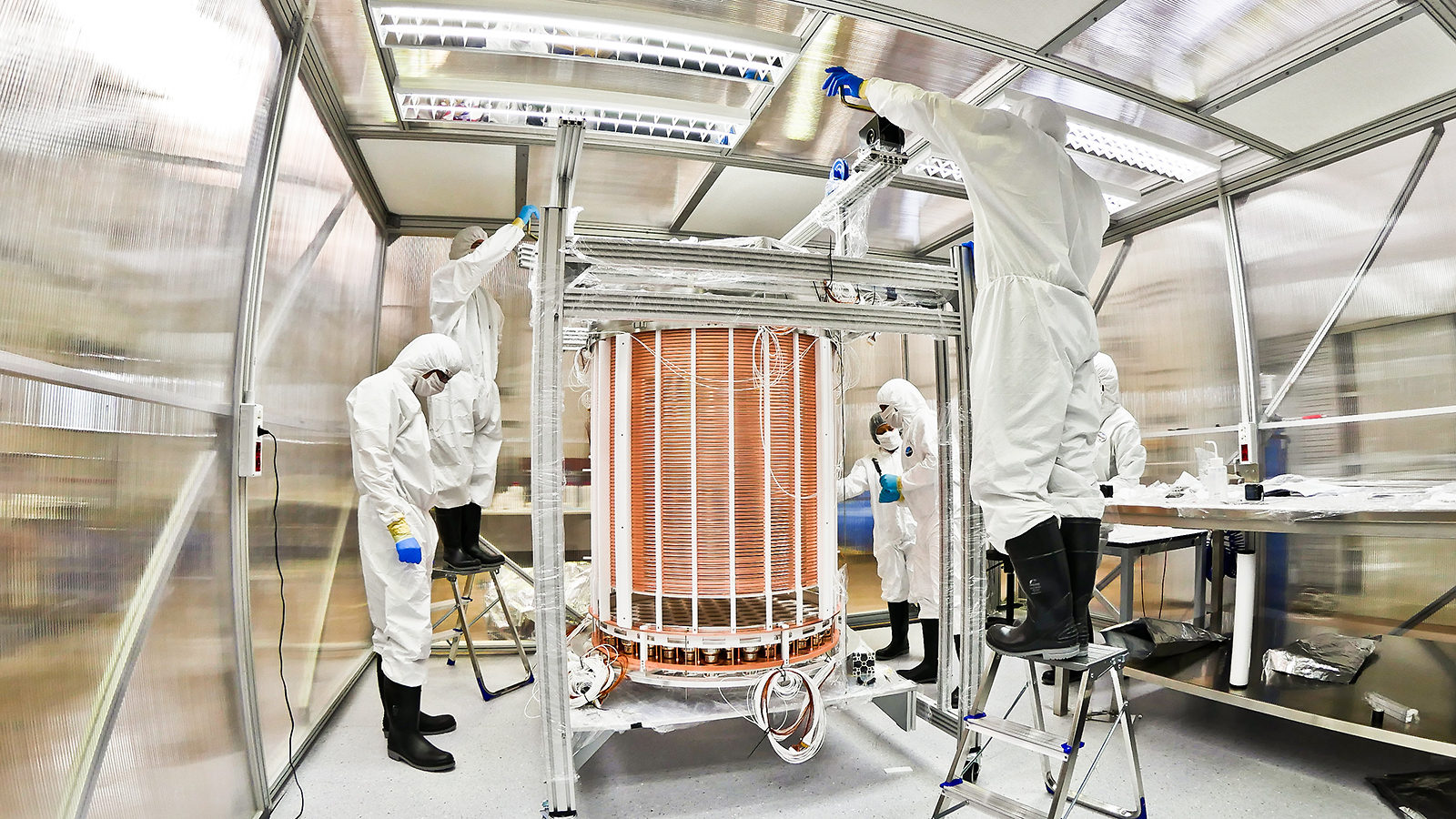 Researchers at a laboratory deep underneath the tallest mountain in central Italy have inaugurated XENON1T, the world’s largest and most sensitive device designed to detect a popular dark matter candidate.

“We will be the biggest game in town,” says Columbia University physicist Elena Aprile, spokesperson for the XENON collaboration, which has over the past decade designed, built and operated a succession of ever-larger experiments that use liquid xenon to look for evidence of weakly interacting massive dark matter particles, or WIMPs, at the Gran Sasso National Laboratory.

Interactions with these dark matter particles are expected to be rare: Just one a year for every 1000 kilograms of xenon. As a result, larger experiments have a better chance of intercepting a WIMP as it passes through the Earth.

XENON1T’s predecessors—XENON 10 (2006 to 2009) and XENON 100 (2010 to the present)—held 25 and 160 kilograms of xenon, respectively. The new XENON11 experiment’s detector measures 1 meter high and 1 meter in diameter and contains 3500 kilograms of liquid xenon, nearly 10 times as much as the next-biggest xenon-filled dark matter experiment, the Large Underground Xenon experiment.

Should a WIMP collide with a xenon atom, kicking its nucleus or knocking out one of its electrons, the result is a burst of fast ultraviolet light and a bunch of free electrons. Scientists built a strong electric field in the XENON1T detector to direct these freed particles to the top of the chamber, where they will create a second burst of light. The relative timing and brightness of the two flashes will help the scientists determine the type of particle that created them.

“Since our detectors can detect even a single electron or photon, XENON1T will be sensitive to even the most feeble particle interactions,” says Rafael Lang, a Purdue University physicist on the XENON collaboration.

The experiment is shielded from other particles such as cosmic rays by separate layers of water, lead, polyethylene and copper—not to mention 1400 meters of Apennine rock that lie above the Gran Sasso lab’s underground tunnels.

Keeping the xenon free of contaminants is essential to the detector’s sensitivity. Oxygen, for example, can trap electrons. And the decay of some radioactive krypton isotopes, which are difficult to separate from xenon, can obscure a WIMP signal. The XENON collaboration’s solution is to continuously circulate and filter 100 liters of xenon gas every minute from the top of the detector through a filtering system before chilling it and returning it to service.

A matter of scale

XENON researchers hope that their new experiment will finally be the one to see definitive evidence of WIMPs. But just in case, XENON1T was designed to accommodate a swift upgrade to 7000 kilograms of xenon in its next iteration. (At the same time, the LUX and UK-based Zeplin groups joined forces to design a similar-scale xenon detector, LZ.)

“If we see nothing with XENON1T, it will still be worth it to move up to the 7000-kilogram device, since it will be relatively easy to do that,” Aprile says. “If we do see a few events with XENON1T—and we’re sure they are from the dark matter particle—then the best way to prove that it’s real is to confirm that result with a larger, more sensitive experiment.