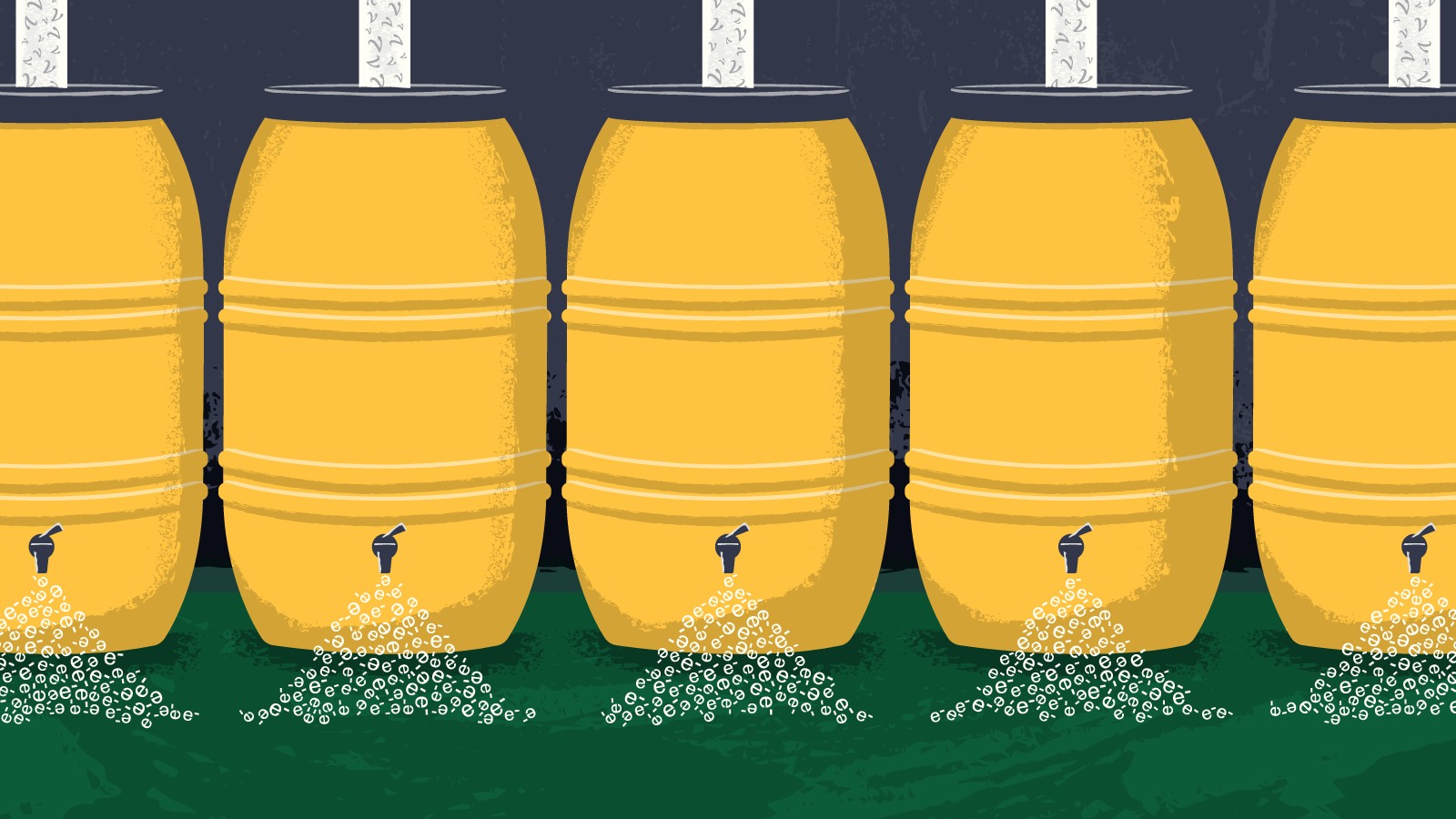 Around 2010, physicist Juan Estrada of the US Department of Energy’s Fermi National Accelerator Laboratory was working on an astrophysics instrument called the Dark Energy Camera. The camera was designed to survey a large swath of the Southern sky and provide pictures that could give insight into dark matter and dark energy, known to shape the structure and appearance of the whole universe.

The remarkable sensors within the Dark Energy Camera were giving him an idea. They had gotten so sensitive that they might be able to detect other particles besides light. It seemed possible that they could even catch the whispers of faint particles called neutrinos.

They would do this by using an elusive process called CEνNS (pronounced “sevens”), coherent elastic neutrino-nucleus scattering, in which neutrinos of a particularly low energy can bounce directly off of atoms in matter.

Ten years later, after a great deal of work, Estrada and a team of over 30 physicists and engineers are getting close to realizing their goal. Their neutrino camera, the first of its kind, began operation in December 2014 at the Angra 2 reactor of the Angra Nuclear Power Plant, the only nuclear power plant in Brazil. The camera is called CONNIE, a friendly acronym for Coherent Neutrino Nucleus Interaction Experiment. 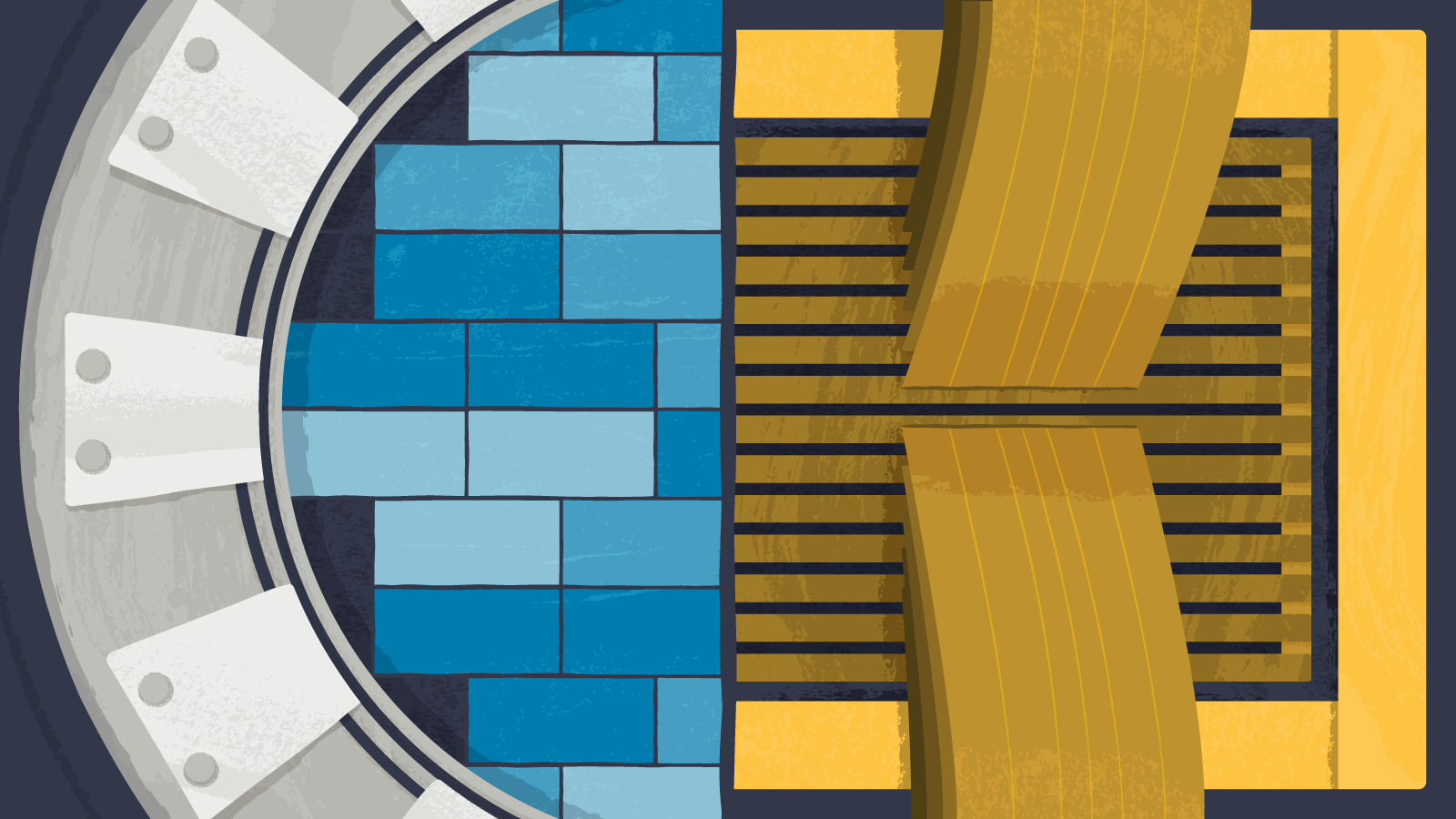 From DECam to CONNIE

CONNIE’s success hinges on those sensors found in the Dark Energy Camera, known as charged coupled devices. CCDs are a core technology behind digital cameras, used in everything from the Hubble Space Telescope to mobile phones. Over the last five years, Estrada and colleagues have made significant breakthroughs in CCD design. Funding for CONNIE has come from the Laboratory Directed Research and Development program at Fermilab, along with member institutions in Argentina, Brazil, Mexico, Paraguay and Switzerland.

When CONNIE get its next upgrade, scheduled for 2021, its researchers should likely detect Angra’s neutrinos at last, via the billiard ball-like CEνNS process.

Neutrinos are considered exceedingly strange compared to most other elementary particles. They are ubiquitous, created in all kinds of nuclear reactions such as fusion reactions that power the sun. But they are notoriously aloof, barely interacting with anything. A trillion solar neutrinos pass through your hand every second, but during your whole lifetime, only around a thousand will imperceptibly touch it.

The neutrino measurements scientists hope to make with the CONNIE detector could eventually serve one of Estrada’s original aims: learning more about the dark matter that makes up the mass of 85% of the universe.

Many models that predict the existence of low-mass dark matter particles also predict that neutrinos are more likely to interact with matter than currently expected. CONNIE will test these predictions by counting up the neutrinos that it detects outside Angra. A larger count than expected, for example, would give indirect support to these types of dark matter models.

“The idea of detecting dark matter really drives my curiosity every day,” Estrada says. “At the same time, I am a person that really likes to build stuff.”

The idea to build his experiment at a reactor came from recognition that reactors produce a huge flux of low-energy (about 1 MeV) neutrinos. Estrada and his team predicted that their sensitive CCDs should detect at least a few particles from out of this enormous output. But as they looked into placing their experiment at a reactor, they realized that they would have to get through a challenging amount of security and access restrictions.

Fortunately, João Carlos dos Anjos, director of the National Observatory of Brazil, was already running an experiment in a shipping container at the Angra nuclear facility. Brazilian team members on the new CONNIE project connected with dos Anjos and, with his help, CONNIE moved in as a roommate with the existing experiment.

After five years of on-site development, CONNIE has now reached the stage where it can be operated fully remotely via the internet. But physical intervention is still occasionally needed; for example, air conditioning units can and do fail in the Brazilian heat. 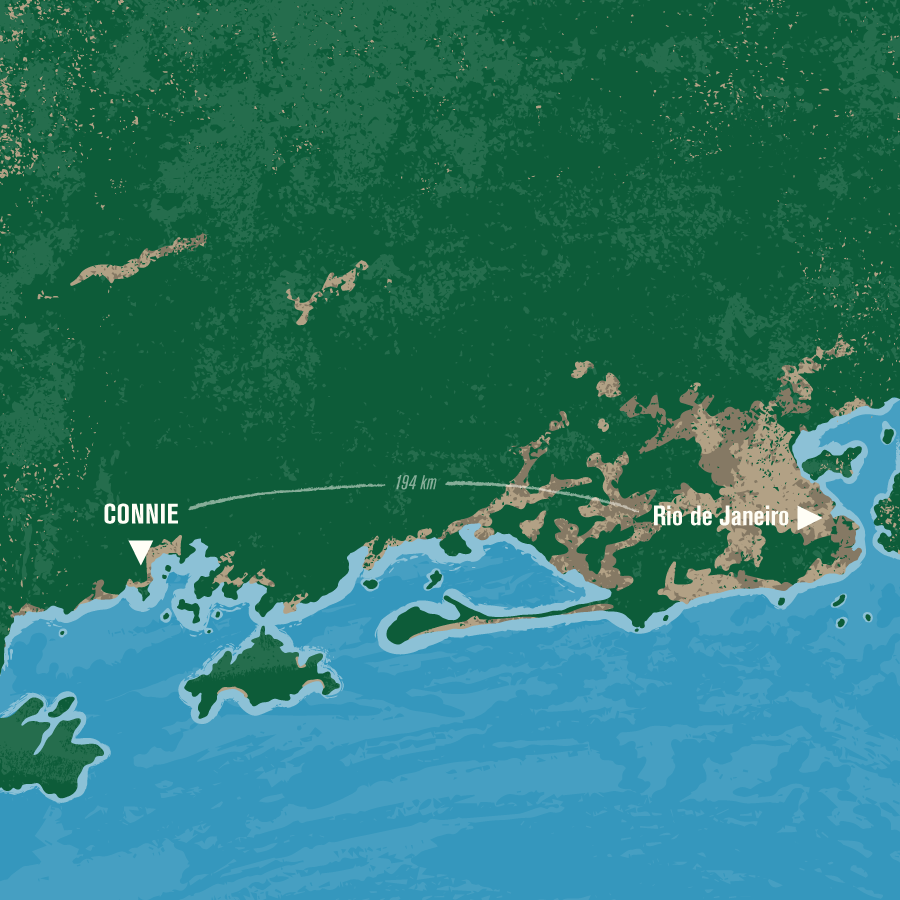 The site of the Angra nuclear facility is a four-hour drive west from Rio de Janeiro, along steep roads that hug the coastline and pass through the mountains. Heavy vehicles make the roads dangerous, but the area is considered one of the most beautiful in the region.

The large shipping container that CONNIE lives in looks about as substantial as a gnat sitting next to the Angra 2 reactor’s giant white containment dome. CONNIE itself is small and compact. Many other experiments that detect neutrinos use huge containers of liquid, weighing in on the scale at metric tons. The bigger the target that the liquid presents, the more likely it is to catch a reclusive neutrino.

By contrast, the stack of 14 CCDs that CONNIE uses looks like a set of small fancy dinner plates, weighing less than a kilogram. But what the plates lack in mass, they make up for in sensitivity—their ability to witness particles pass through them.

When particles pass through CONNIE’s CCDs and interact with their material, the sensors build up electric charge, like rain buckets catching water. This is because the CCDs are actually printed silicon chips; incoming particles knock out charged electrons from the chips’ silicon atoms, or knock into nuclei that in turn knock out electrons from other atoms. A few times a day, researchers activate the CCD circuitry that empties this charge, the amount of which correlates with the number of particles that passed through the CCD.

“The strategy of analysis is reactor on minus reactor off, subtracting the contribution of background, and the hypothesis you’re making is that the background doesn’t change during the time,” says Carla Bonifazi, professor at Universidade Federal do Rio de Janeiro in Brazil, one of the physicists who leads the experiment locally.

Though the detection process has yet to reveal neutrinos from the reactor, researchers have increasingly keyed into the obstacles. 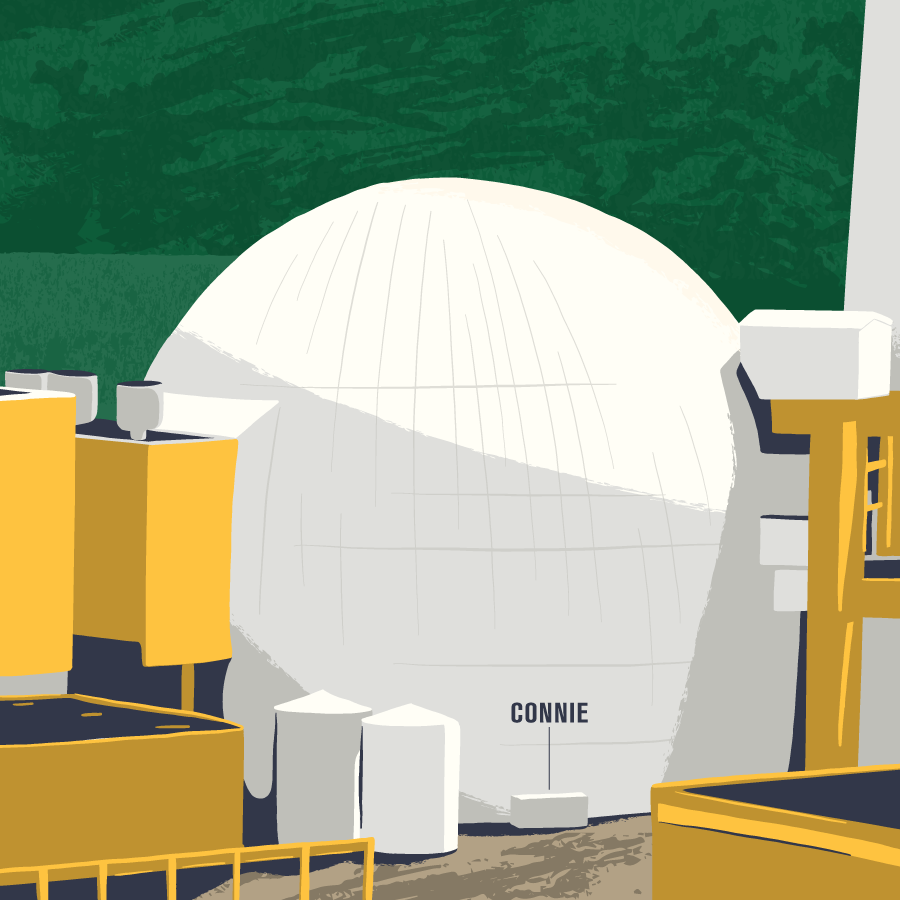 The CCDs that specialist fabricators at Lawrence Berkeley National Laboratory and Fermilab initially designed for CONNIE were extraordinarily thick and wide. That gave low-energy neutrinos plenty of space in which to bounce or scatter off atoms via the aforementioned CEνNS process. And when they send the CCD’s silicon atoms recoiling, these have the chance of knocking out electrons from other atoms—an electric charge that can be measured.

But because of the low-mass and low-energy of the incoming neutrinos, the atoms that recoil away from them tend to do so too weakly to knock out electrons from other neighboring atoms. Hitting a silicon atom with a reactor neutrino is comparable to bouncing a ping pong ball off a truck—it creates only a tiny whisper of recoil.

The CEνNS process was predicted theoretically over 40 years ago, but it was only measured for the first time in 2017 at the Spallation Neutron Source at Oak Ridge National Laboratory as part of a project known as COHERENT.

“CONNIE is trying to do something even more challenging [than COHERENT], and it will be really awesome when they succeed,” says Kate Scholberg, a professor at Duke University and spokesperson for COHERENT. “They’re looking for neutrinos from nuclear reactors that are very copious but lower in energy by a factor of 10, so that they give really incredibly tiny recoils.”

Because of the innovative design of CONNIE’s CCDs, scientists predicted the detector’s first scientific run in 2016 would catch neutrinos, but there turned out to be an unexpected problem. The recoiling nuclei in the CCD sometimes knock out electrons, but they also sometimes make the whole CCD sensor vibrate, like a ping pong ball hitting a truck but transferring its energy straight into the ground that the truck sits on. This process reduces or quenches the recoil energy available to knock out electrons.

The quenching observed in the results in 2019 turned out to be larger than predicted, by a factor of five to 10, and the signal generated by neutrinos was therefore indistinguishable from electrical noise. CONNIE was sensitive enough to show only that no more than 40 times the expected neutrino interactions were present. To get much more sensitive, researchers have figured out how to get rid of the noise.

Guillermo Moroni joined Estrada’s team in 2011 as a doctoral student at the Universidad Nacional del Sur in Argentina. In 2011, he led a study on how to design a modern CCD with almost no readout noise, known as a “skipper CCD.”

“It was first invented in the ’90s, but nobody used it for 20 years,” Moroni says. “The problem is that it is very hard to operate. Most of the time we spent was to understand how to operate the sensor.” In the last several years, Moroni has also led development of its readout electronics.

The skipper CCD uses a remarkably elegant principle to reduce noise. The neutrino-induced charge that collects in the sensor is moved to a kind of holding area, where it can be measured, moved back out, moved back in, and then measured again. The charge can be skipped in and out like this repeatedly, thousands of times. This slows down the readout process, but smears out practically all of the noise, just like rolling a die more and more times can increase the confidence that it’s fair.

With a skipper CCD, even the tiniest recoils that knock out only a single electron can be precisely measured. Another experiment called SENSEI is already using skipper CCDs to get “incredible” results, Moroni says.

CONNIE scientists plan to have its skipper upgrade sometime next year. Then, the detector should start catching neutrinos and measuring their interactions with matter, providing a powerful new source of data to search for phenomena like dark matter, undescribed by the Standard Model.

CONNIE researchers from countries including Argentina, Brazil, Mexico, Paraguay and the USA are working to improve it in in other ways, too. They hope to move it inside the containment dome of the reactor so that it can experience an even higher flux of neutrinos, either at Angra or at a different reactor in Argentina.

“It is clear that CONNIE is the most significant particle physics experiment in Brazil,” Bonifazi says. “It puts us on the front line of knowledge.”