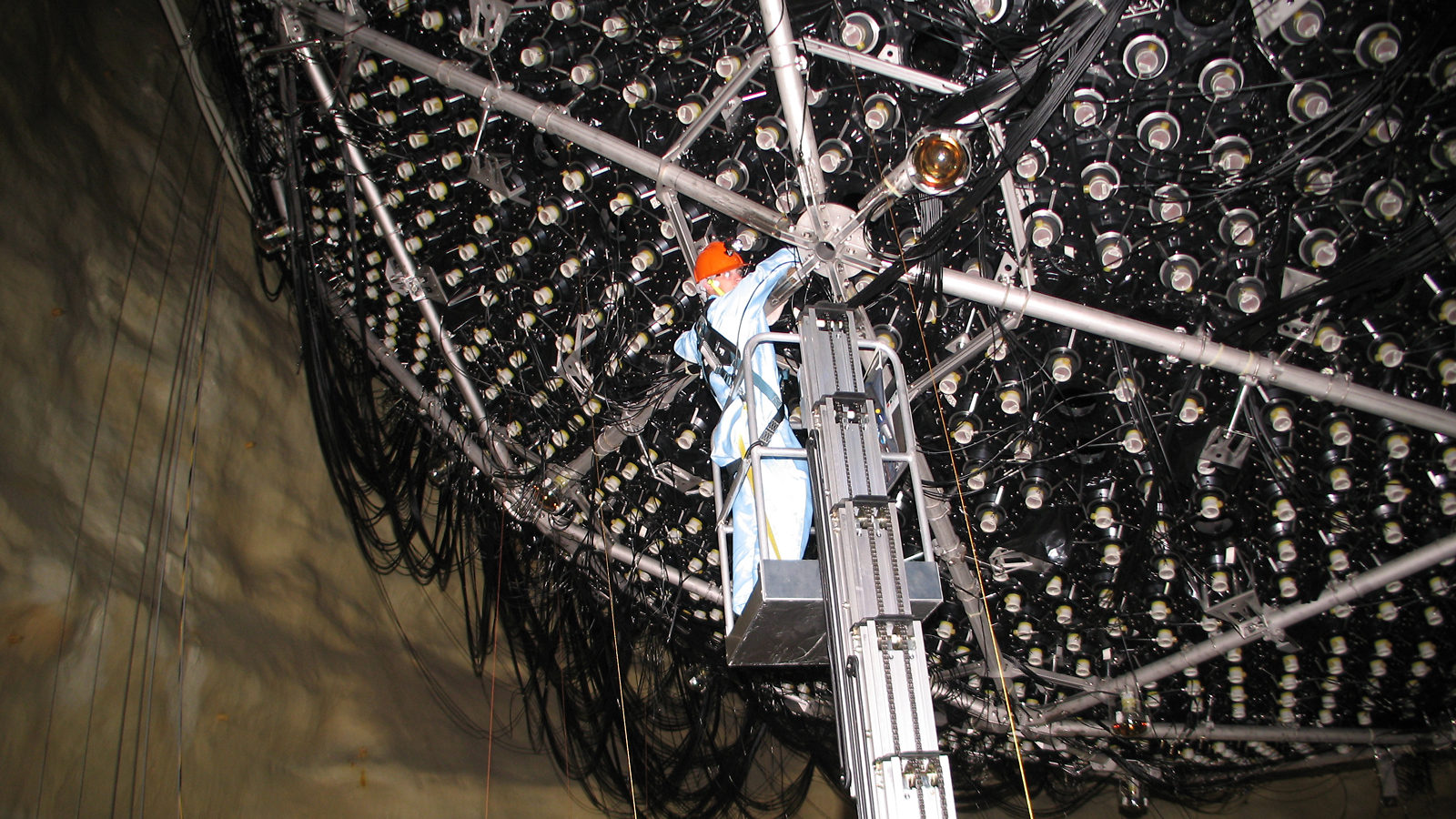 Although they might be invisible to the naked eye, contaminants less than a micron in size can ruin very sensitive experiments in particle physics.

Flakes of skin, insect parts and other air-surfing particles—collectively known as dust—force scientists to construct or conduct certain experiments in cleanrooms, special places with regulated contaminant levels. There, scientists use a variety of tactics to keep their experiments dust-free.

Cleanrooms are classified by how many particles are found in a cubic foot of space. The fewer the particles, the cleaner the cleanroom.

To prevent contaminating particles from getting in, everything that enters cleanrooms must be covered or cleaned, including the people. Scratch that: especially the people.

“People are the dirtiest things in a cleanroom,” says Lisa Kaufman, assistant professor of nuclear physics at Indiana University. “We have to protect experiment detectors from ourselves.”

Humans are walking landfills as far as a cleanroom is concerned. We shed hair and skin incessantly, both of which form dust. Our body and clothes also carry dust and dirt. Even our fingerprints can be adversaries.

In an experiment detector susceptible to radioactivity, the potassium in one fingerprint can create a flurry of false signals, which could cloud the real signals the experiment seeks.

As a cleanroom’s greatest enemy, humans must cover up completely to go inside: A zip-up coverall, known as a bunny suit, sequesters shed skin. (Although its name alludes otherwise, the bunny suit lacks floppy ears and a fluffy tail.) Shower-cap-like headgear holds in hair. Booties cover soiled shoes. Gloves are a must-have. In particularly clean cleanrooms, or for scientists sporting burly beards, facemasks may be necessary as well.

These items keep the number of particles brought into a cleanroom at a minimum.

“In a normal place, if you have some surface that’s unattended, that you don’t dust, after a few days you’ll see lots and lots of stuff,” Roodman says. “In a cleanroom, you don’t see anything.”

Getting to nothing, however, can take a lot more work than just covering up.

Washing up at SNOLAB

“This one undergrad who worked here put it, ‘Cleanroom is a verb, not a noun.’ Because the way you get a cleanroom clean is by constantly cleaning,” says research scientist Chris Jillings.

Jillings works at SNOLAB, an underground laboratory studying neutrinos and dark matter. The lab is housed in an active Canadian mine.

SNOLAB’s biggest concern is mine dust, because it contains uranium and thorium. These radioactive elements can upset sensitive detectors in SNOLAB experiments, such as DEAP-3600, which is searching for the faint whisper of dark matter. Uranium and thorium could leave signals in its detector that look like evidence of dark matter.

“People are the dirtiest things in a cleanroom... We have to protect experiment detectors from ourselves.”

Most workplaces can’t guarantee that all of their employees shower before work, but SNOLAB can. Everyone entering SNOLAB must shower on their way in and re-dress in a set of freshly laundered clothes.

“We’ve sort of made it normal. It doesn’t seem strange to us,” says Jillings, who works on DEAP-3600. “It saves you a few minutes in the morning because you don’t have to shower at home.” More importantly, showering removes mine dust.

SNOLAB also regularly wipes down every surface and constantly filters the air.

Clearing the air for EXO

Endless air filtration is a mainstay of all modern cleanrooms. Willis Whitfield, former physicist at Sandia National Laboratories, invented the modern cleanroom in 1962 by introducing this continuous filtered airflow to flush out particles.

The filtered, pressurized, dehumidified air can make those who work in cleanrooms thirsty and contact-wearers uncomfortable.

“You get used to it over time,” says Kaufman, who works in a cleanroom for the SLAC-headed Enriched Xenon Observatory experiment, EXO-200.

EXO-200 is another testament to particle physicists’ affinity for mines. The experiment hunts for extremely rare double beta decay events at WIPP, a salt mine in New Mexico, in its own class-1000 cleanroom—even cleaner than SNOLAB.

As with SNOLAB experiments, anything emitting even the faintest amount of radiation is foe to EXO-200. Though those entering EXO-200’s cleanroom don’t have to shower, they do have to wash their arms, ears, face, neck and hands before covering up.

Ditching the dust for LSST

SLAC laboratory recently finished building another class-1000 cleanroom, specifically for assembly of the Large Synoptic Survey Telescope. LSST, an astronomical camera, will take over four years to build and will be the largest camera ever.

While SNOLAB and the EXO-200 cleanroom are mostly concerned with the radioactivity in particles containing uranium, thorium or potassium, LSST is wary of even the physical presence of particles.

“If you’ve got parts that have to fit together really precisely, even a little dust particle can cause problems,” Roodman says. Dust can block or absorb light in various parts of the LSST camera.

To reduce the chance of a zap, the LSST cleanroom features static-dissipating floors and all of its benches and tables are grounded. Once again, humans prove to be the worst offenders.

“Most electrostatic discharge events are generated from humans,” says Jeff Tice, LSST cleanroom manager. “Your body is a capacitor and able to store a charge.”

Scientists assembling the camera will wear static-reducing garments as well as antistatic wrist straps that ground them to the floor and prevent the buildup of static electricity.

From static electricity to mine dust to fingerprints, every cleanroom is threatened by its own set of unseen enemies. But they all have one visible enemy in common: us.