When she finally finished, she felt a burden lift. For the first time in years, she could fill out a CV without facing a choice: Should she abandon the portion of her research published under her old name? Or claim it and risk facing discrimination for being transgender?

For a long time, publishers met requests to update names on previously published papers with a firm "no." When publishing exclusively meant printing and physically distributing academic journals, such revisions were not possible. But now that digital publication is the norm, publishers have started to create new policies.

The challenge for researchers like Trewartha is that scientists don’t just publish in a single journal. When each publisher has its own policy, its own representatives to be contacted, and its own bureaucratic hoops to jump through, it’s no wonder an already-busy researcher took half a year to get through it all.

Enter Joerg Heber, Research Integrity Officer at Lawrence Berkeley National Lab, and Lady Idos, the lab’s Chief Equity, Diversity and Inclusion Officer. Earlier this year, they joined a push already decades in the making to make changing a name on a past paper not just possible—but simple.

Today they, along with partners from all 17 US Department of Energy national laboratories, publishers, journals and other organizations, are announcing an initiative to streamline and centralize the name-change process.

Instead of having to contact multiple journals to update past publications, a scientist that changes their name will now be able to contact a single representative at their institution, which will pursue the rest of the process on their behalf.

Participation of the national laboratories is driven by the individual institutions, not a DOE or federal directive.

Deputizing the laboratories to handle name changes simplifies the identity-verification process, Heber says. When considering a name change for an individual, publishers want to make sure the request is coming from the right person. It helps to have an institution vouch for the scientist. Plus, a streamlined process reduces the number of possibly stressful, personal conversations a scientist must go through to claim work that is rightfully theirs.

Researchers are not required to seek a name change through their institutions; they can still go about it individually, if they’d prefer.

Miriam Blake, science & technology publications manager at Pacific Northwest National Lab, is a member of the initiative. She and around 30 people in various departments across the different national labs have met virtually once a month to collaborate. She says it has been an opportunity to evaluate what structures exist to aid transgender researchers in updating their names for published works and figuring out how the labs can support them further.

“The publishers have been so accommodating, and the labs have been eager to get involved,” Blake says. “We have a long way to go, but every step that we take to make this kind of work visible and make it easier for folks going through any transition in their life that previously was difficult is good for society.”

Trewartha contributed to the effort by offering her name-change journey as a test case. She worked with Heber and Idos throughout those six months of name-change requests to examine what different policies looked like at different publishers and to identify the hitches in the process.

She also took the time to offer her feedback to the publishers. Trewartha says that, while this communication took time, she took it on in the hopes that the researchers that come after her will have a better experience.

Heber says he hopes more publishing partners are on the way. He says it’s already been rewarding to see how many groups have wanted to get involved. “It’s great seeing how so many publishers and other institutions are all constructively working on this,” he says. “We always run into open doors, because everybody wants to improve the situation.”

While the initiative marks a big step, Trewartha says, it’s not a complete solution. For one, papers don’t represent a researcher’s entire body of scholarly work. Trewartha says she still has conference proceedings, old data sets, talk recordings and more that haven’t been updated. There’s currently no easy way to update every paper that cites a researcher’s past work under an old name. And aggregation services like Google Scholar don’t frequently index, so a researcher’s information might take a while to change.

“An entire ecosystem of places feed off this data,” Trewartha says. “The publishers have been good about changing the names on papers, but there's just so much downstream stuff that needs to be changed. It's difficult to round up every possible instance.”

Even if it’s impossible to get every single instance of a name changed, Trewartha says, the progress this group has made thus far represents an important culture shift in the academic community.

“The whole system of publication is built with an assumption that people will have one name” that never changes, Trewartha says. “It's been obvious for many years that this doesn't work for everyone.

“This is a recognition that the system of publication and the system of academia has to work for everyone, and it has to be inclusive.” 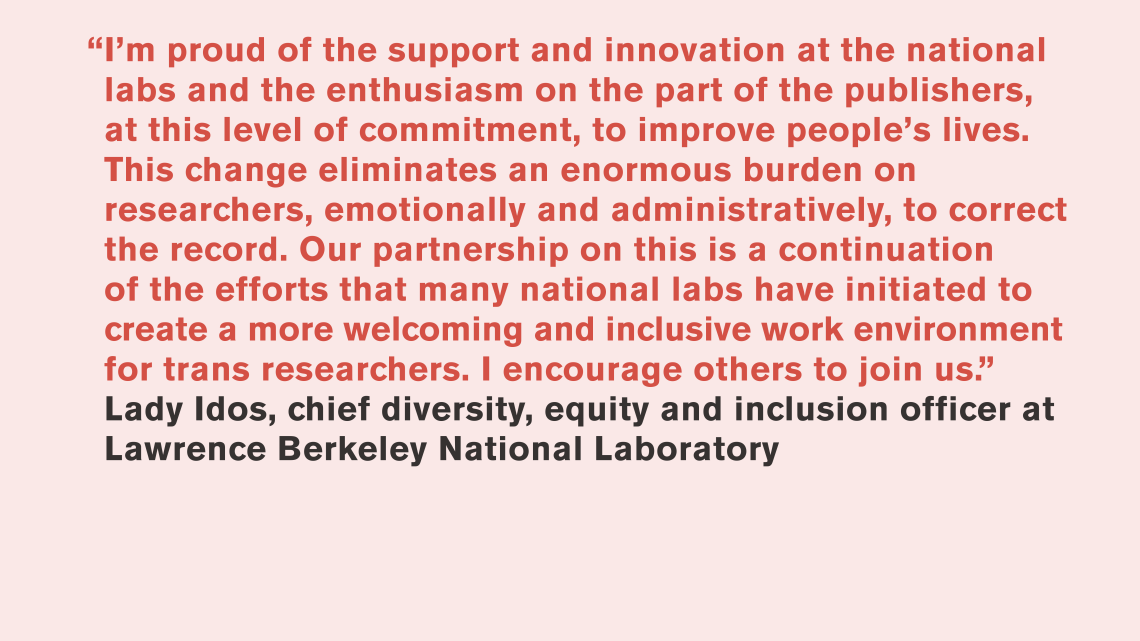 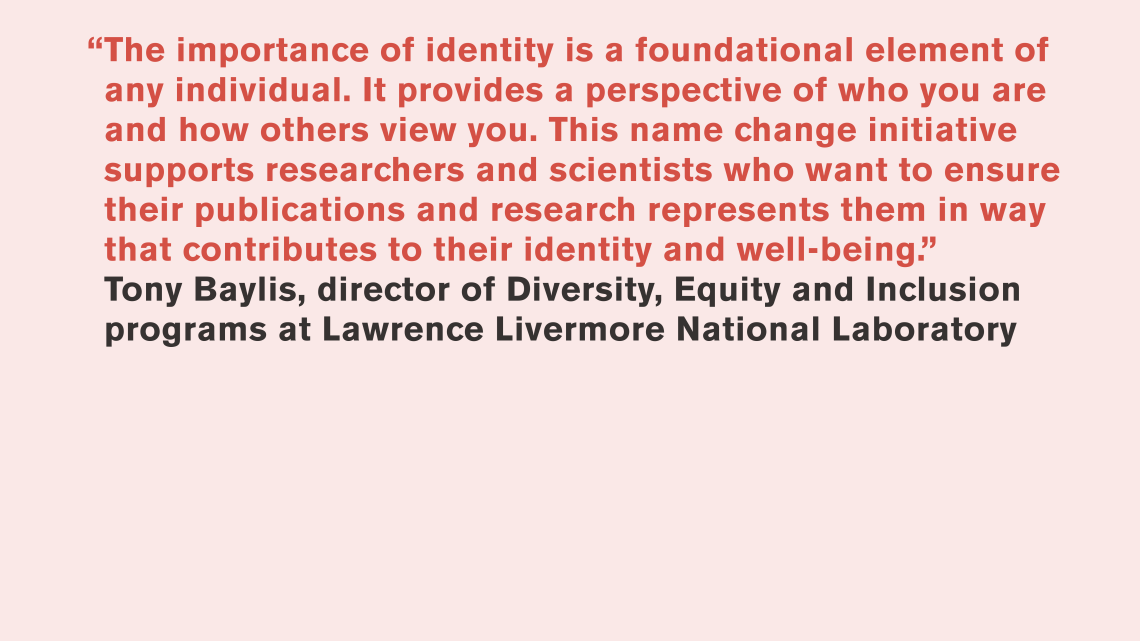 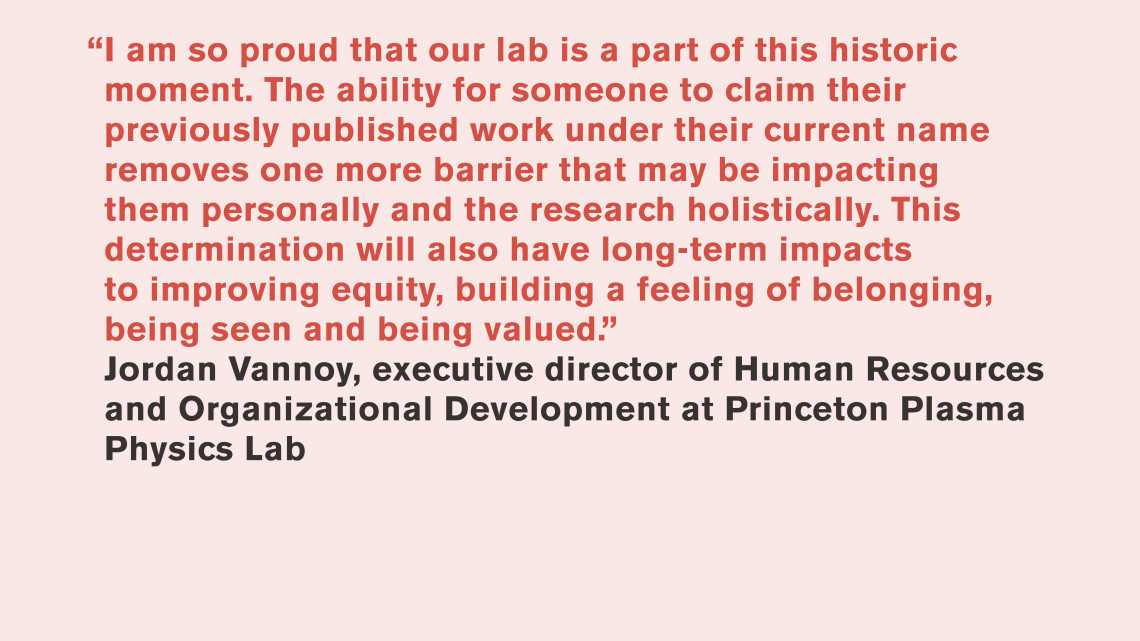 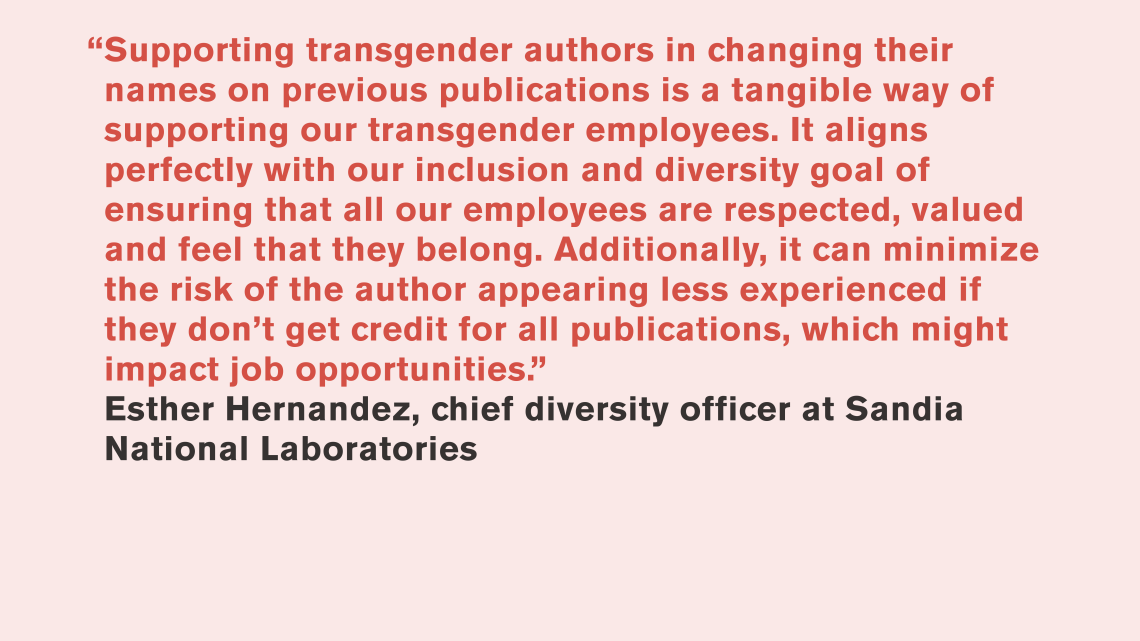 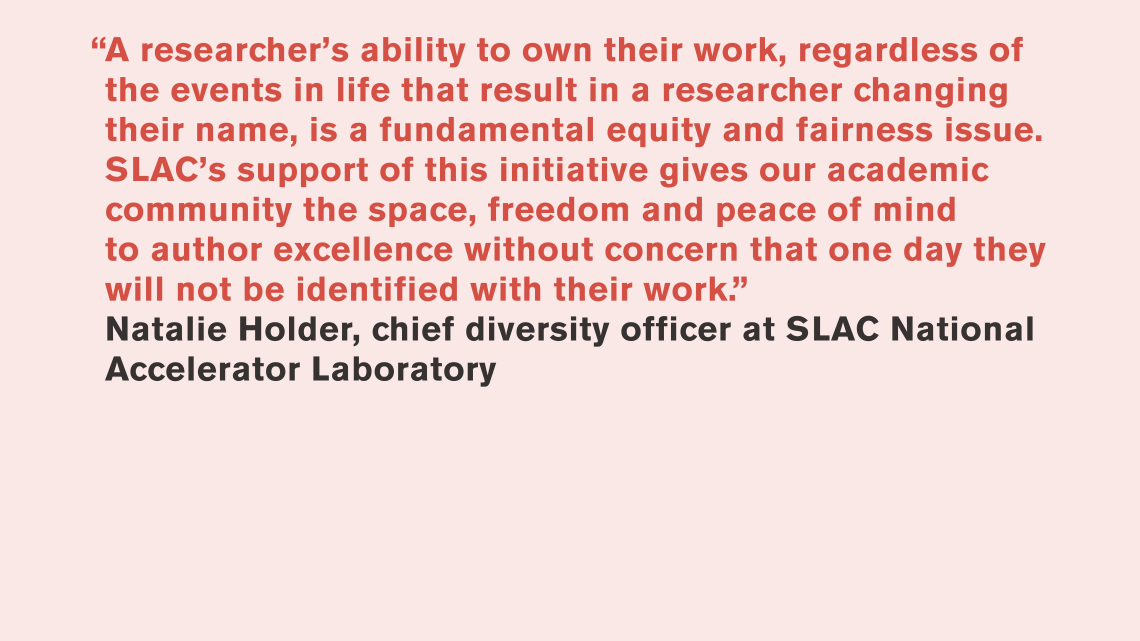 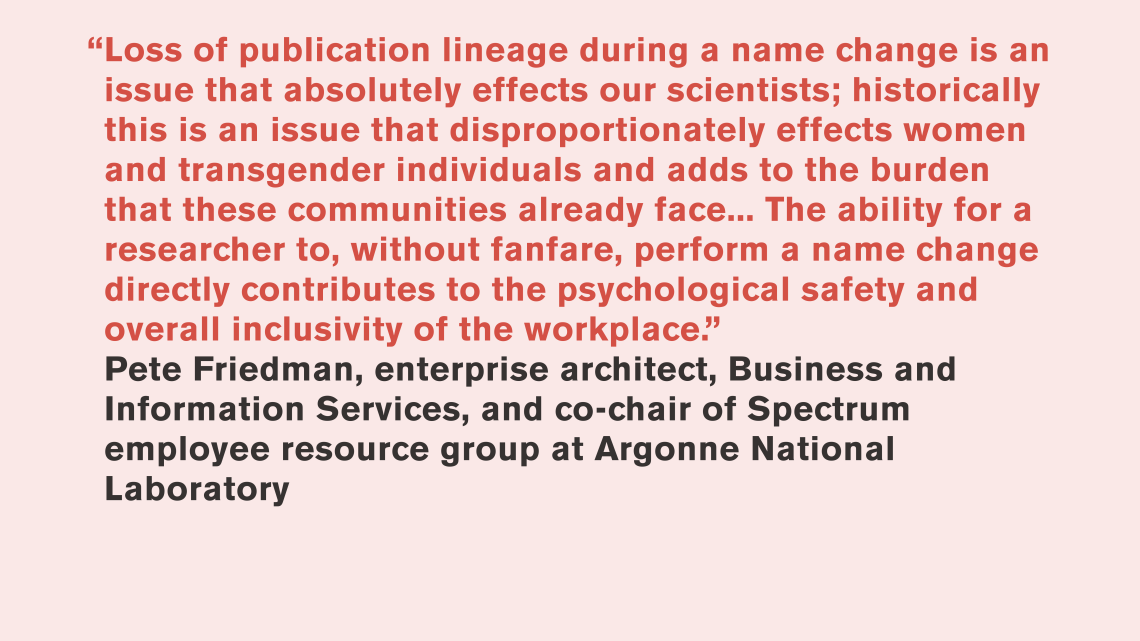 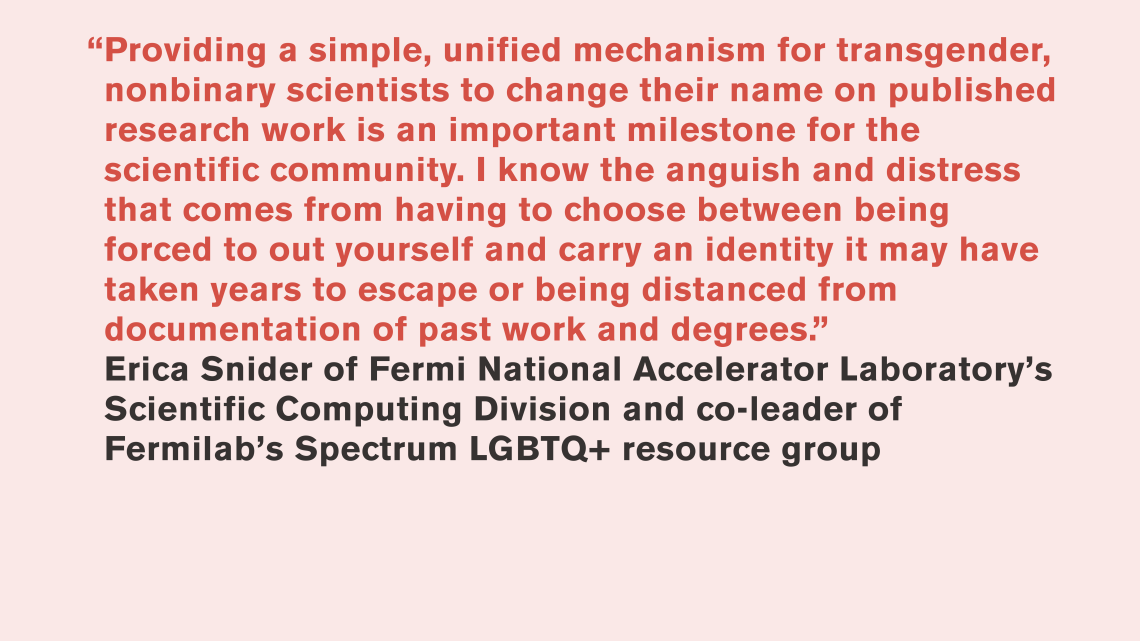 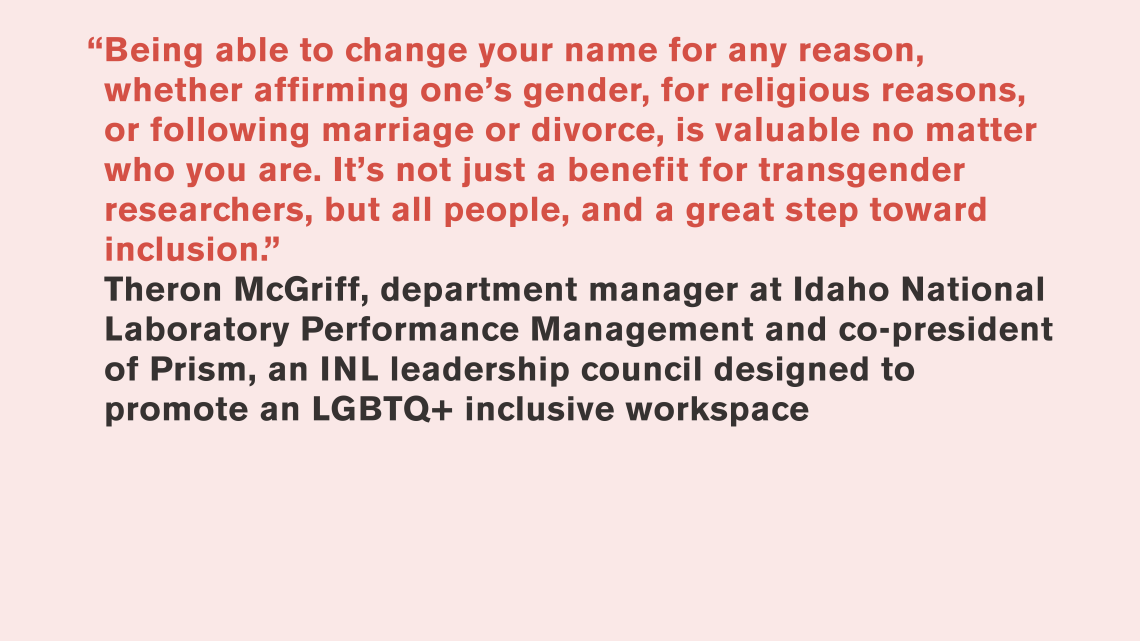 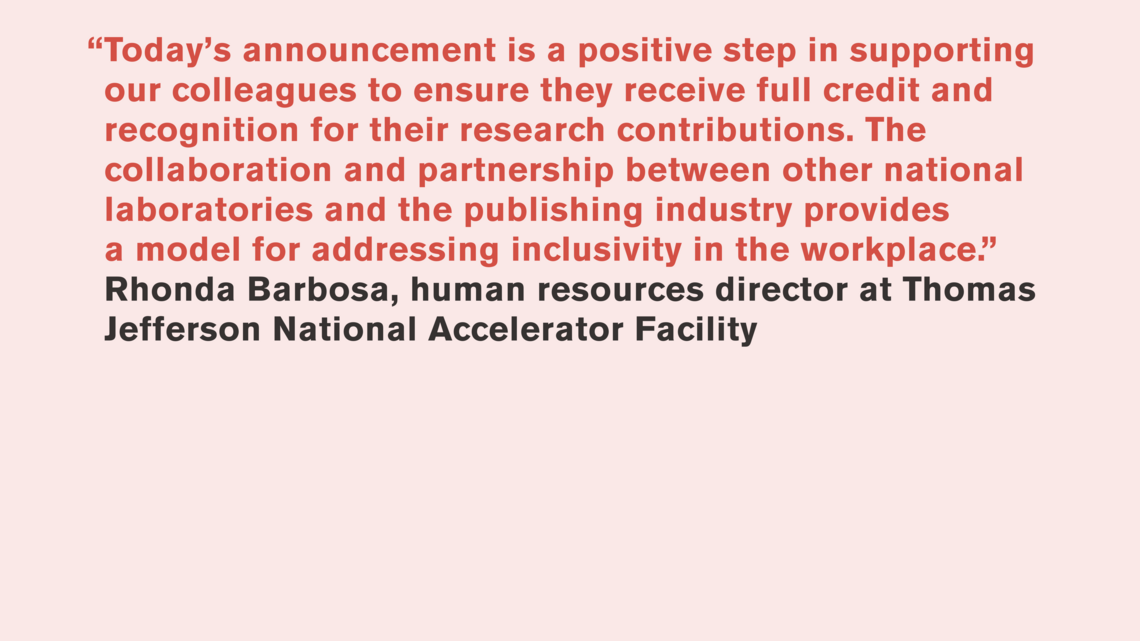 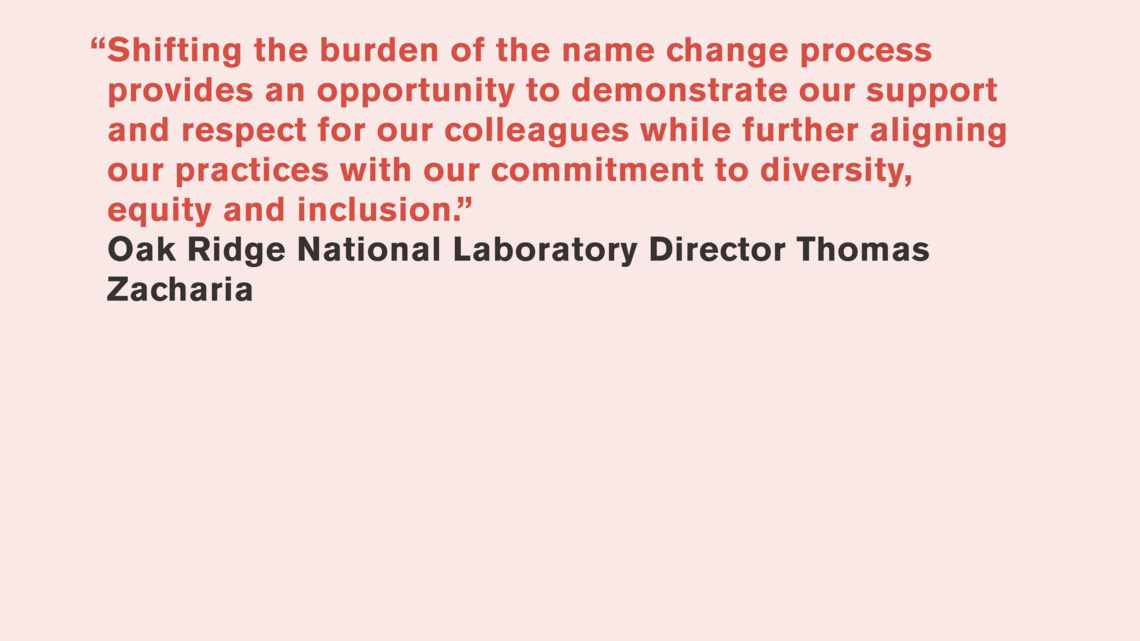 Editor's note: Berkeley Lab has uploaded a podcast episode about the initiative.