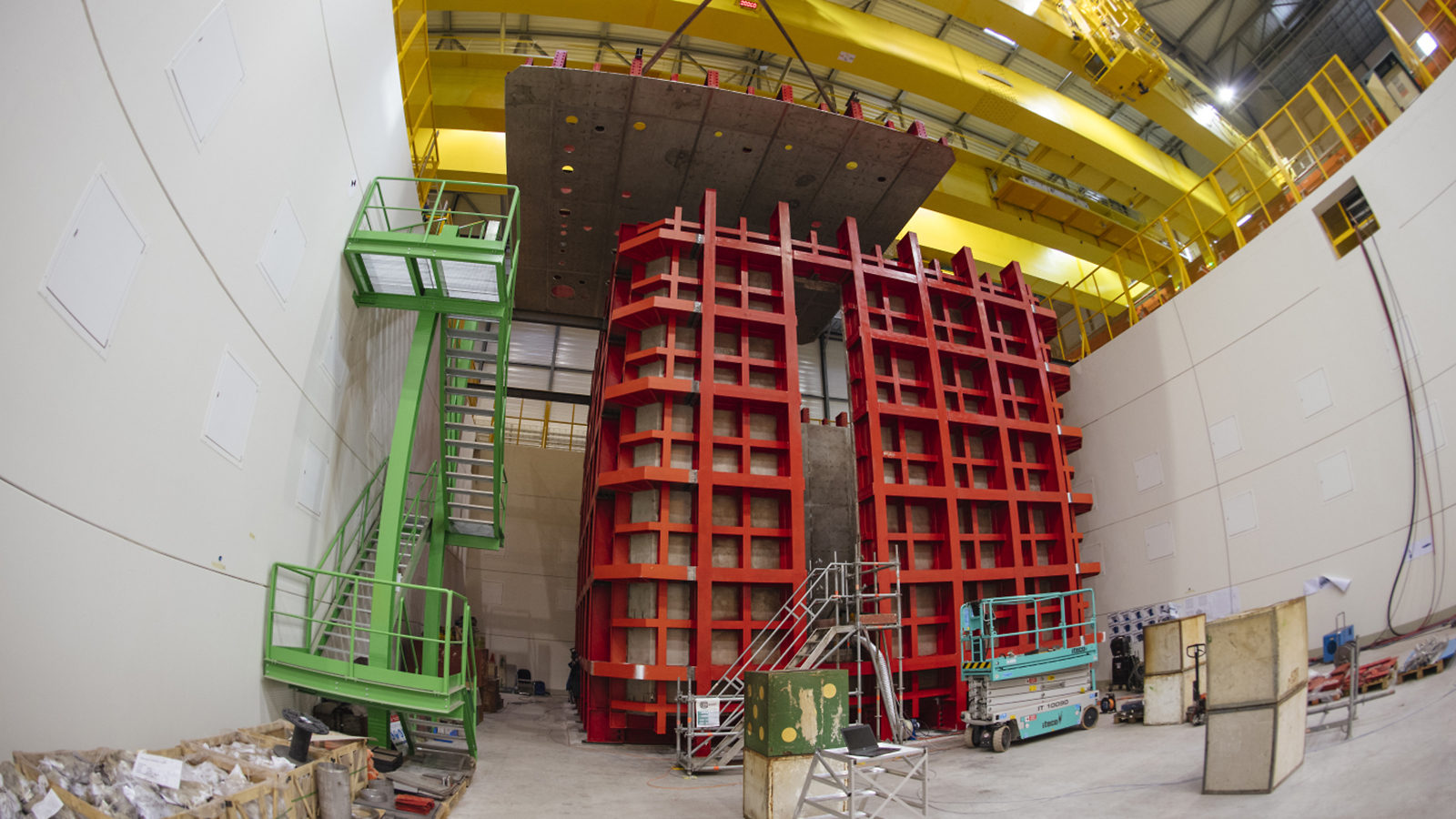 In the midst of the verdant French countryside is a workshop the size of an aircraft hangar bustling with activity. In a well lit new extension, technicians cut through thick slices of steel with electric saws and blast metal joints with welding torches.

Inside this building sits its newest occupant: a two-story-tall cube with thick steel walls that resemble castle turrets. This cube will eventually hold a prototype detector for the Deep Underground Neutrino Experiment, or DUNE, the flagship research program hosted at the Department of Energy’s Fermi National Accelerator Laboratory to better understand the weird properties of neutrinos.

Neutrinos are the second-most abundant fundamental particle in the visible universe, but because they rarely interact with atoms, little is known about them. The little that is known presents a daunting challenge for physicists since neutrinos are exceptionally elusive and incredibly lightweight.

They’re so light that scientists are still working to pin down the masses of their three different types. They also continually morph from one of their three types into another—a behavior known as oscillation, one that keeps scientists on their toes.

“We don’t know what these masses are or have a clear understanding of the flavor oscillation,” says Stefania Bordoni, a CERN researcher working on neutrino detector development. “Learning more about neutrinos could help us better understand how the early universe evolved and why the world is made of matter and not antimatter.”

In 2015 CERN and the United States signed a new cooperation agreement that affirmed the United States’ continued participation in the Large Hadron Collider research program and CERN's commitment to serve as the European base for the US-hosted neutrino program. Since this agreement, CERN has been chugging full-speed ahead to build and refurbish neutrino detectors.

“Our past and continued partnerships have always shown the United States and CERN are stronger together,” says Marzio Nessi, the head of CERN’s neutrino platform. “Our big science project works only because of international collaboration.”

The primary goal of CERN’s neutrino platform is to provide the infrastructure to test two large prototypes for DUNE’s far detectors. The final detectors will be constructed at Sanford Lab in South Dakota. Eventually they will sit 1.5 kilometers underground, recording data from neutrinos generated 1300 kilometers away at Fermilab.

Two 8-meter-tall cubes, currently under construction at CERN, will each contain 770 metric tons of liquid argon permeated with a strong electric field. The international DUNE collaboration will construct two smaller, but still large, versions of the DUNE detector to be tested inside these cubes.

In the first version of the DUNE detector design, particles traveling through the liquid knock out a trail of electrons from argon atoms. This chain of electrons is sucked toward the 16,000 sensors lining the inside of the container. From this data, physicists can derive the trajectory and energy of the original particle.

In the second version, the DUNE collaboration is working on a new type of technology that introduces a thin layer of argon gas hovering above the liquid argon. The idea is that the additional gas will amplify the signal of these passing particles and give scientists a higher sensitivity to low-energy neutrinos. Scientists based at CERN are currently developing a 3-cubic-meter model, which they plan to scale up into the much larger prototype in 2017.

In addition to these DUNE prototypes, CERN is also refurbishing a neutrino detector, called ICARUS, which was used in a previous experiment at the Italian Institute for Nuclear Physics’ Gran Sasso National Laboratory in Italy. ICARUS will be shipped to Fermilab in March 2017 and incorporated into a separate experiment.

CERN plans to serve as a resource for neutrino programs hosted elsewhere in the world as scientists delve deeper into this enigmatic niche of particle physics.