CERN and US increase cooperation

The United States and the European physics laboratory have formally agreed to partner on continued LHC research, upcoming neutrino research and a future collider. 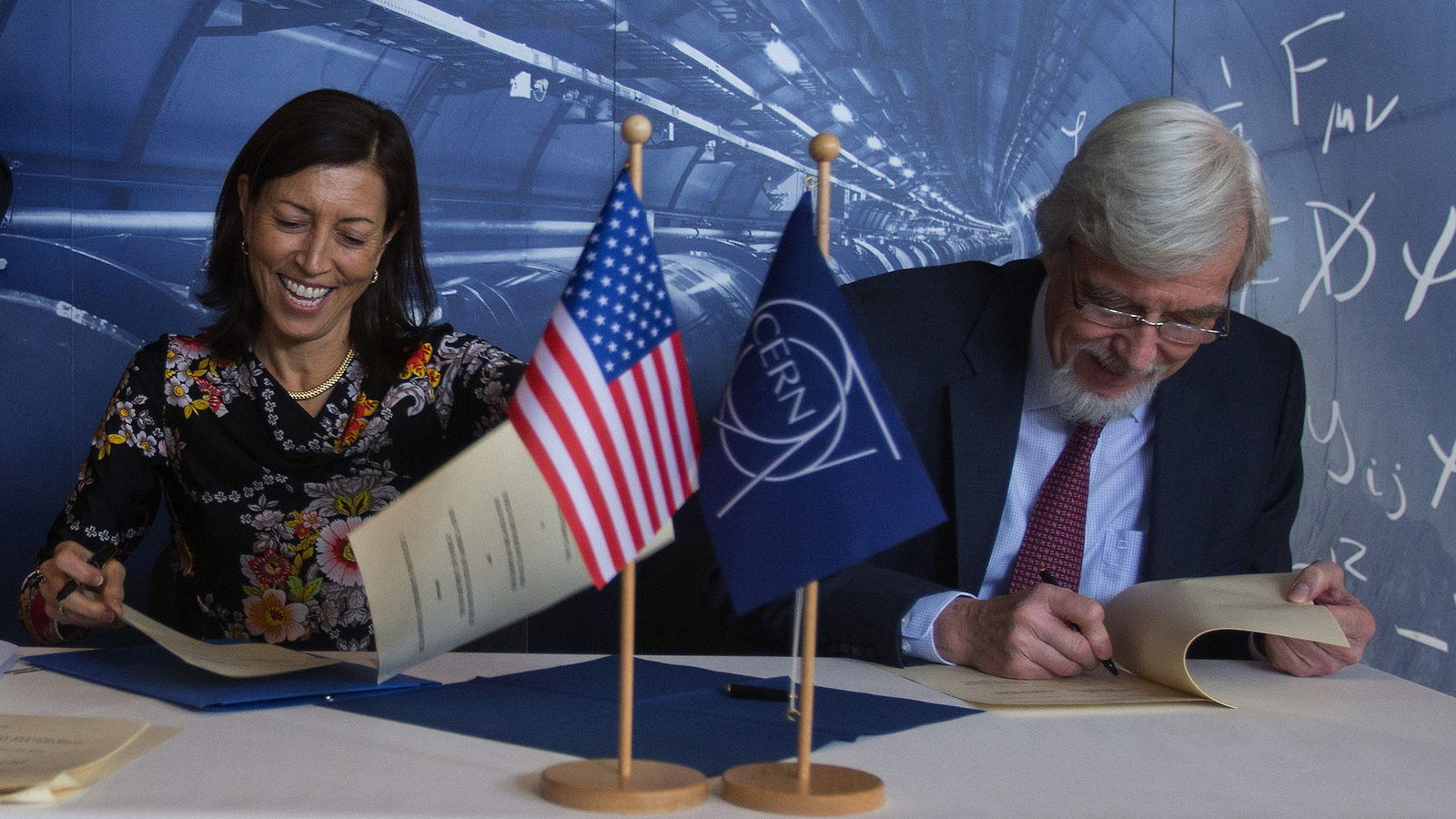 Today in a ceremony at CERN, US Ambassador to the United Nations Pamela Hamamoto and CERN Director-General Rolf Heuer signed five formal agreements that will serve as the framework for future US-CERN collaboration.

These protocols augment the US-CERN cooperation agreement signed in May 2015 in a White House ceremony and confirm the United States’ continued commitment to research at the Large Hadron Collider. They also officially expand the US-CERN partnership to include work on a US-based neutrino research program and on the study of a future circular collider at CERN.

“This is truly a good day for the relationship between CERN and the United States,” says Hamamoto, US permanent representative to the United Nations in Geneva. “By working together across borders and cultures, we challenge our knowledge and push back the frontiers of the unknown.”

The partnership between the United States and CERN dates back to the 1950s, when American scientist Isidor Rabi served as one of CERN’s founding members.

“Today’s agreements herald a new era in CERN-US collaboration in particle physics,” Heuer says. “They confirm the US commitment to the LHC project, and for the first time, they set down in black and white European participation through CERN in pioneering neutrino research in the US. They are a significant step towards a fully connected trans-Atlantic research program.”

Today, the United States is the most represented nation in both the ATLAS and CMS collaborations at the LHC. Its contributions are sponsored through the US Department of Energy’s Office of Science and the National Science Foundation.

According to the new protocols, the United States will continue to support the LHC program through participation in the ATLAS, CMS and ALICE experiments. The LHC Accelerator Research Program, an R&D partnership between five US national laboratories, plans to develop powerful new magnets and accelerating cavities for an upgrade to the accelerator called the High-Luminosity LHC, scheduled to begin at the end of this decade.

In addition, a joint neutrino-research protocol will enable a new type of reciprocal relationship to blossom between CERN and the US.

“The CERN neutrino platform is an important development for CERN,” says Marzio Nessi, its coordinator. “It embodies CERN’s undertaking to foster and contribute to fundamental research in neutrino physics at particle accelerators worldwide, notably in the US.”

The agreement will enable scientists and engineers working at CERN to participate in the design and development of technology for the Deep Underground Neutrino Experiment, a Fermilab-hosted experiment that will explore the mystery of neutrino oscillations and neutrino mass.

Finally, the protocols pave the way beyond the LHC research program. The United States and CERN will collaborate on physics and technology studies aimed at the development of a proposed new circular accelerator, with the aim of reaching seven times higher energies than the LHC.

The protocols take effect immediately and will be renewed automatically on a five-year basis.