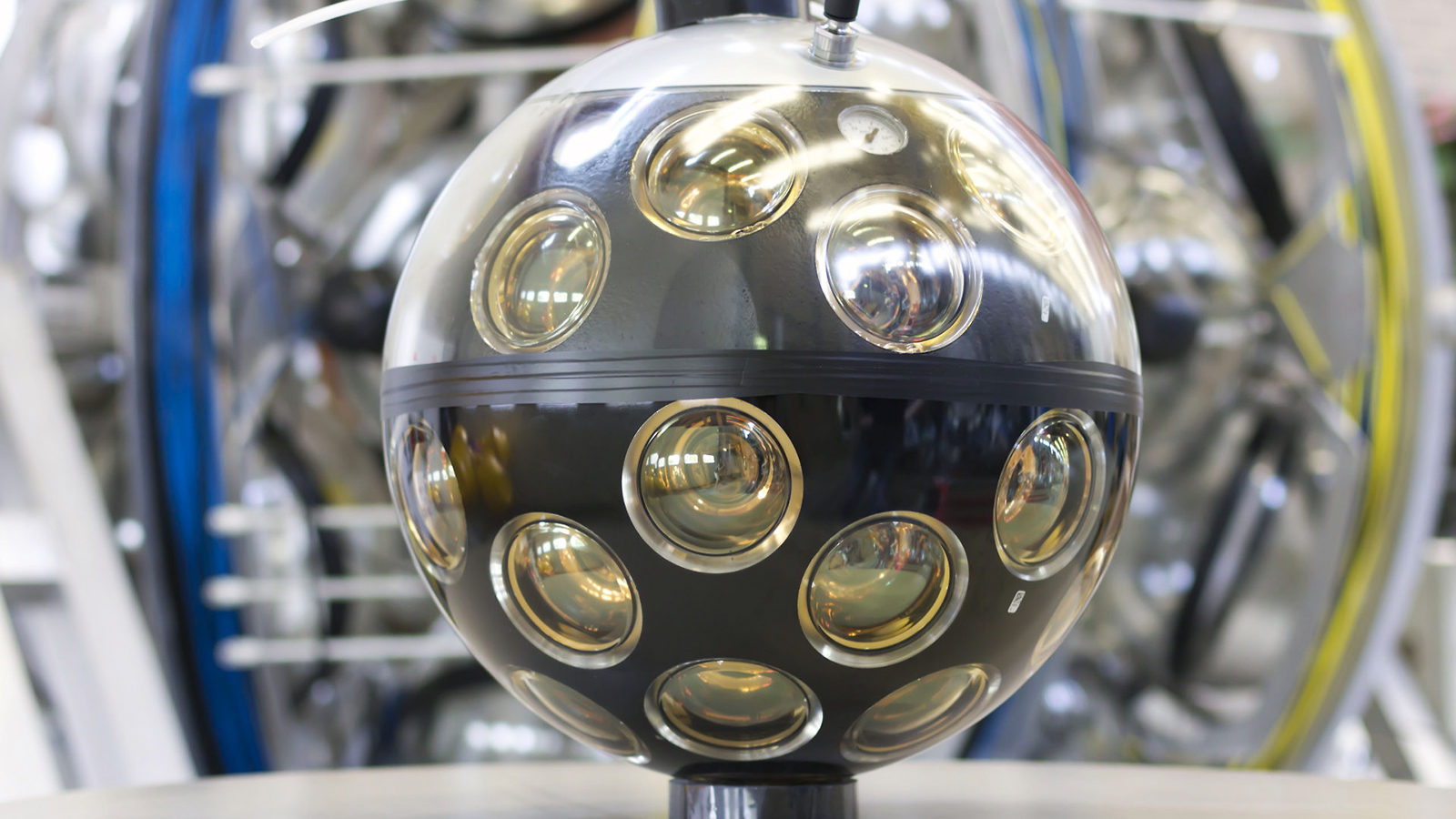 Like ordinary telescopes, KM3NeT operates in darkness—but there the resemblance ends. The Km3 Neutrino Telescope (where km3 means a cubic kilometer) is a suite of detectors that sits at the pitch-black bottom of the Mediterranean Sea, 3.5 kilometers below the waves and strong currents of the surface.

KM3NeT needs this absolute night to see the faint amount of light from ghostly neutrinos striking water molecules. Neutrinos pass through most material as though it weren’t there, which is why detectors need to be so big to spot them—more volume means more chances to see a neutrino interact. When completed, KM3NeT will be the largest neutrino detector in the world, made of about 1.3 trillion gallons of seawater.

Throughout that space will stand 700-meter-long cables anchored to the sea floor, each with glass spheres containing photomultipliers that turn flashes of light into electrical signals scientists can measure. The cables will be spaced far enough apart to keep from tangling up, but close enough together to see signs of passing neutrinos.

There is currently only one string in place, which was installed in December 2015. While the plan is to complete KM3NeT with hundreds of strands off the coasts of Italy, France and Greece in four to five years, it won’t take that long for scientifically useful results.

“As soon as you have a reasonable size detector, it's scientifically relevant,” says KM3NeT spokesperson Maarten de Jong of the Nationaal instituut voor subatomaire fysica (National Institute for Subatomic Physics, or Nikhef) in the Netherlands. As more detector strings are added, KM3NeT will see more neutrinos. “In two years [KM3NeT] will be scientifically relevant in the sense that they'll supersede previous measurements.” 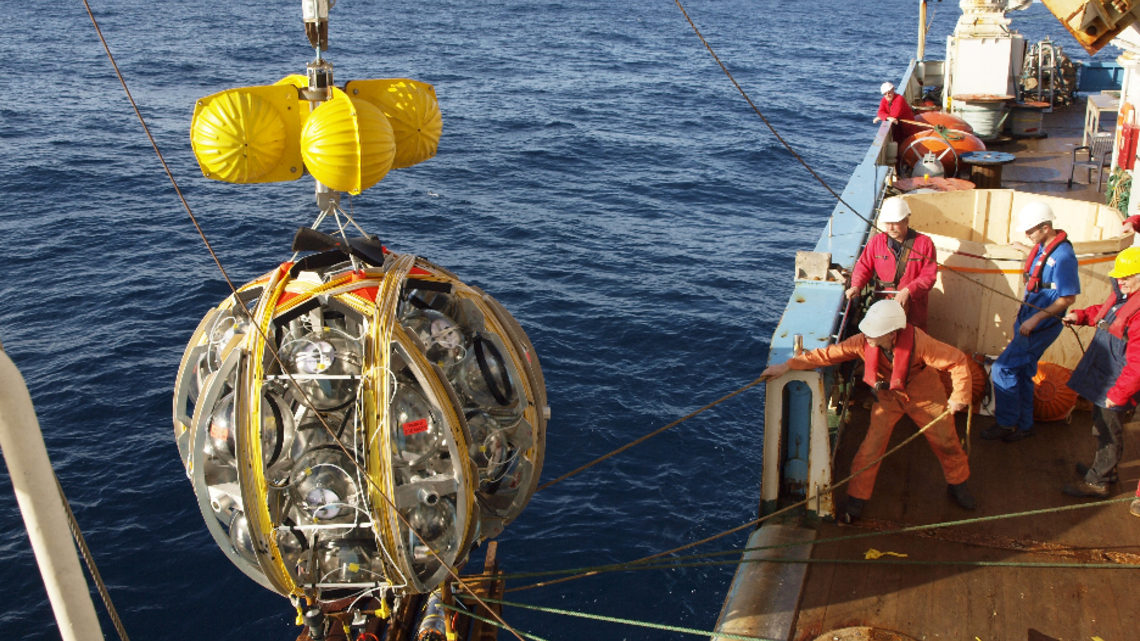 The KM3NeT team installs the detectors using an “inverted yo-yo,” as technical project manager Marco Circella calls it. This rough sphere, about 3 meters across, sinks under the weight of a heavy anchor until landing on the seafloor. Then, operators aboard a ship fire sonic releases. The yo-yo floats back toward the surface, unwinding the string of 18 glass spheres as it goes, and arrives ready for restringing.

The glass spheres can withstand the high water pressure 3.5 kilometers below sea level. In fact, IceCube and other underwater experiments like ANTARES (also in the Mediterranean) and the Lake Baikal Neutrino Observatory in Siberia also use glass spheres, but contain only one photomultiplier per sphere compared to KM3NeT’s 31.

Each sphere is wired separately, so that if any of them fail, the experiment can keep going. Those wires are connected to an undersea cable by robotic submarines controlled from aboard the ship.

Circella, who works at the Istituto Nazionale di Fisica Nucleare (National Institute of Nuclear Physics, or INFN) in Italy, describes the process as being like a video game. “You have a joystick and I think [the operators] have the same level of fun, but this is only possible if they are really well-prepared.”

The cable runs from the detector strings back to shore, where data from the photomultiplier tubes are turned into something scientists can read. 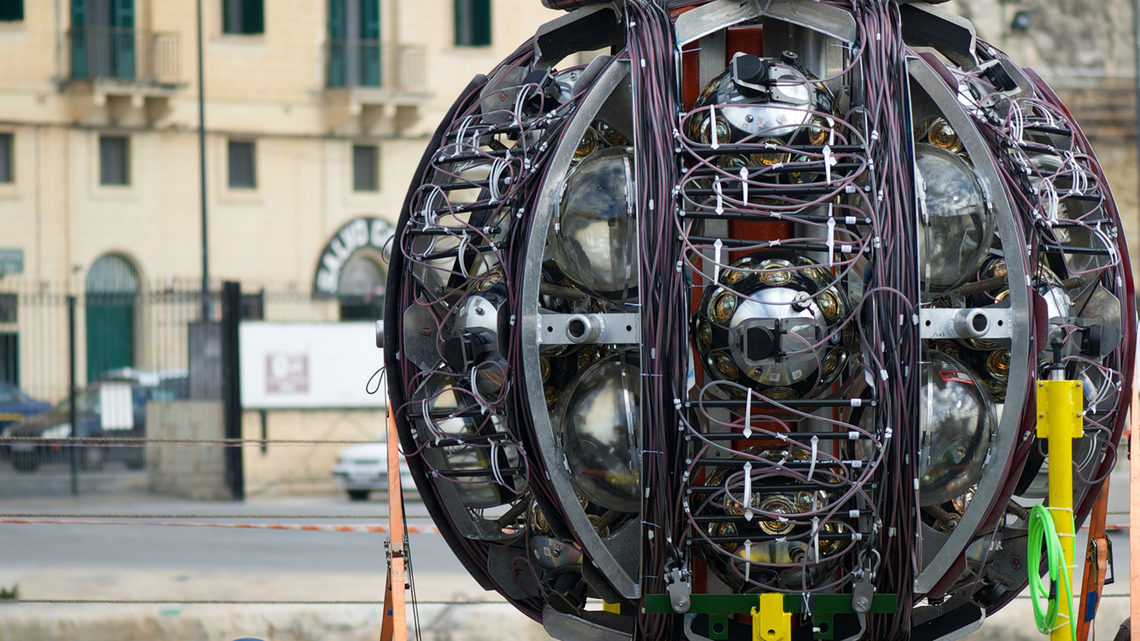 KM3NeT works similarly to other large neutrino observatories such as the IceCube detector at the South Pole.

When a neutrino comes along, it strikes a water molecule, which reacts by producing a muon. Muons are the heavy cousins of electrons, and these neutrino-made muons are born traveling faster than the speed of light in water. (Nothing can travel faster than the speed of light in a vacuum, but all bets are off in water.) The muons produce flashes of light, akin to sonic booms from airplanes.

Of course, other things can make flashes of light, from cosmic rays to deep-sea organisms. At the depth of KM3NeT, most of these other sources are gone, but to be absolutely sure they’re seeing neutrinos, researchers track the direction the flashes originate.

Because nothing but a neutrino is likely to pass through Earth, the planet itself is the biggest shield from false signals. So KM3NeT searches for sources in the southern part of the sky, whose neutrinos would have to pass through the earth to reach its detectors. IceCube’s position at the South Pole makes it best suited for looking at sources in the northern sky.

“We have a very good view of the central region of the Milky Way,” says Maarten de Jong. “This is of course a region of particular interest, because we know that there is a black hole and other interesting potential sources of high energy neutrinos.”

Additionally, the observatories are designed to look for different neutrino sources. KM3NeT’s detectors are more closely arranged than IceCube’s, so it has a better chance of seeing the large number of low-energy neutrinos coming from various places in the galaxy. IceCube, by contrast, sees the highest energy neutrinos, including those coming from outside the Milky Way.

Both experiments have also proposed expansions. KM3NeT 2.0 could begin construction around 2020 and be able to look for some of the same high-energy neutrinos IceCube can see. IceCube’s Precision IceCube Next Generation Upgrade, or PINGU, would be more sensitive to lower-energy neutrinos.

“In some ways IceCube and KM3NeT are competitors, and that's important,” says Drexel University physicist Naoko Kurahashi Neilson, who works on IceCube. “You don't want just one group doing all the science of one field! I think it's very healthy and in fact it pushes us to do better when we have a competitor.”

The experiments do have some common goals, including finding the sources of cosmic rays coming from deep space. These energetic particles’ paths are curved by magnetic forces, making it hard to pinpoint their sources. But the same phenomena that make cosmic rays—which could include the remnants of supernovas, neutron stars, and possibly hot plasmas around black holes—should make neutrinos too, and those aren’t bothered by magnetic fields.

If researchers can locate the source of deep space neutrinos, they’ll know where at least some cosmic rays come from too.