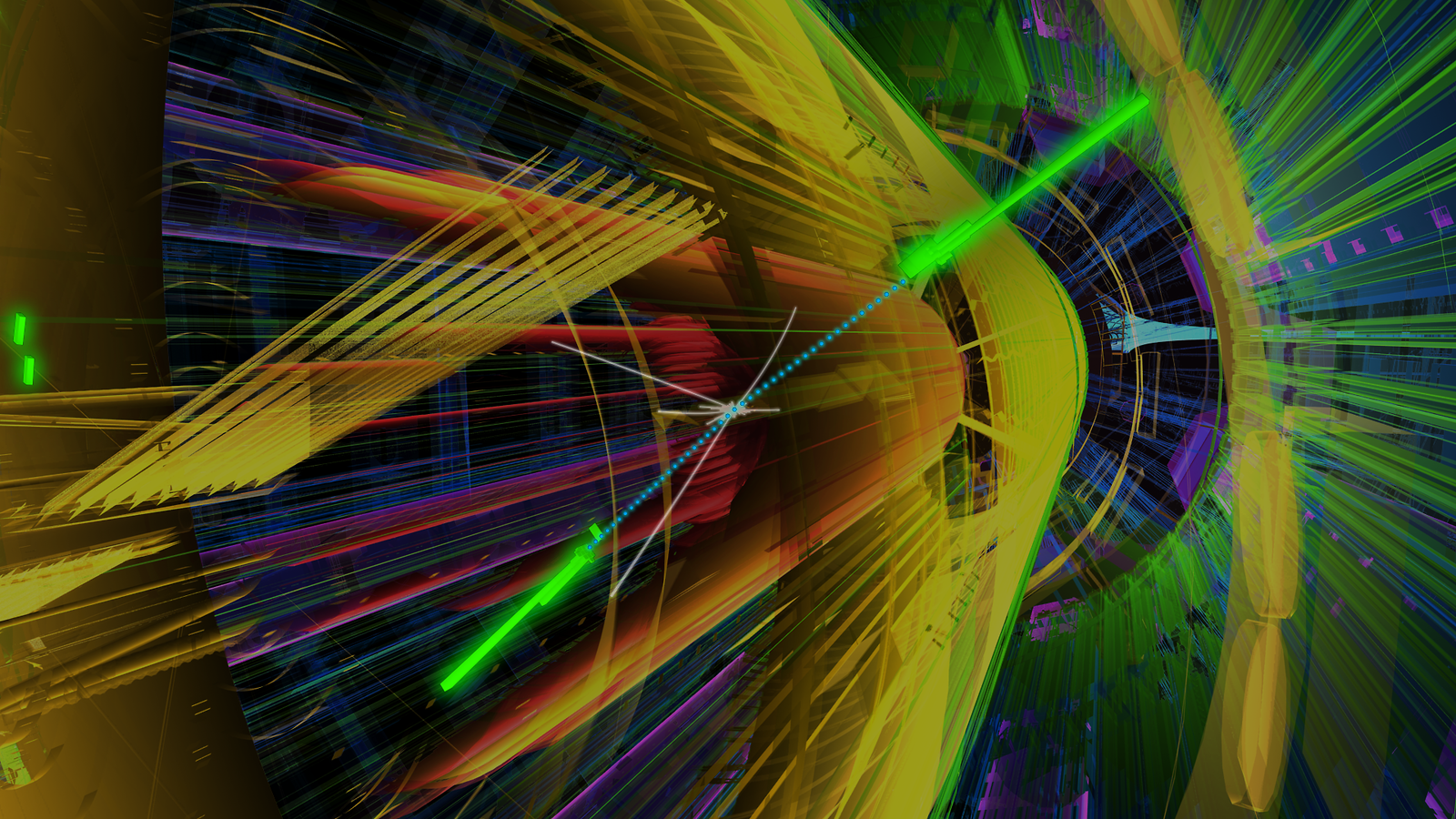 In December, the ATLAS and CMS experiments presented a sneak peek of the new data collected during the first few months of the Large Hadron Collider’s enormously energetic second run. Both experiments reported a small excess of photon pairs with a combined mass around 750 GeV. This small excess could be the first hint of a new massive particle that spits out two photons as it decays, or it might be a coincidental fluctuation that will disappear with more information.

Now, physicists are presenting their latest analyses at the Moriond conference in La Thuile, Italy, including a full investigation of this mysterious bump. After carefully checking, cross-checking and rechecking the data, both experiments have come to the same conclusion—the bump is still there.

“We’ve re-calibrated our data and made several improvements to our analyses,” says Livia Soffi, a postdoc at Cornell University. “These are the best, most refined results we have. But we’re still working with the same amount of data we collected in 2015. At this point, only more data could make a significant difference in our ongoing research.”

LHC physicists wield a myriad of powerful tools to investigate the mysteries of the universe: a 17-mile-long particle accelerator; huge and intricate particle detectors; a worldwide network of computing centers. But from all these resources, there’s one tool that can make or break any potential discovery—statistics.

In 2015, LHC scientists recorded data from 20 trillion proton-proton collisions. A few tens of thousands of these collisions simultaneously produced a high-energy and clean pair of photons. Around 1200 of these photon pairs have a combined energy of 125 GeV (scientists now know that Higgs Bosons spat-out about 100 of them. The other 1100 were produced by normal and well known processes.) Moving towards higher energies, the spectrum starts to fluctuate more and more as there are fewer and fewer pairs recorded. At around 750 GeV, scientists observed only a few dozen photon pairs, and a handful more than predicted.

But whether this extra handful is evidence of a new particle or just another normal statistical fluctuation is essentially a coin toss.

“In physics we sometimes see excesses due to statistical fluctuations as we go up to higher and higher energies,” says Massimiliano Bellomo, a postdoc at the University of Massachusetts, Amherst. “We’re currently at the very edge of our sensitivity and cannot confirm or exclude any of the bumps we’re watching until we have much more data.”

On its own, one small bump means nothing. But excitement builds when independent experiments start to see the same bump popping up over and over again.

“I saw this fluctuation while doing my PhD thesis with CMS data from Run 1 and didn’t think anything of it,” Soffi says. “Now CMS and ATLAS have both seen it again in the new data. This could easily be a coincidence. But if it keeps showing up, then we might have something.”

For their new analysis, the CMS experiment incorporated about 20 percent more data—data that was recorded during Run 2 when the CMS magnet was turned off. They also recalculated the energies of particles recorded by the detector using more refined calibrations. After integrating these two improvements into their analysis, CMS is still seeing the bump; and it’s slightly more pronounced than before.

ATLAS scientists are also delving deeper into this mystery. This week they re-examined data collected from the first run of the LHC to see if this recalcitrant bump would make yet another appearance. Scientists performed two independent searches, each employing a slightly different method to classify and separate the photon pairs. In one analysis, scientists again saw a small excess of photons pairs at 750 GeV. But in the other analysis, they saw nothing out of the ordinary. A further investigation of the 13 TeV data from 2015 shows that the bump is still there, but still not significant.

“The bottom line is that we can’t say anything definitive until we have more data,” says Beate Heinemann, a researcher at the US Department of Energy’s Berkeley Laboratory and deputy spokesperson for the ATLAS experiment. “Therefore we are now focusing on getting ready to record and analyze the large amount of data that the LHC will deliver this year.”

Even with the limited amount of data, physicists are already looking ahead and speculating what this little bump could be if it grows over time. A popular and emerging theory is that it could be the first glimpse of a heavier cousin of the Higgs boson.

“We have discovered one Higgs boson with a mass of 125 GeV,” says Andrei Gritsan, a professor of physics at Johns Hopkins University. “We are trying to understand this boson deeper, but at the same time we are looking for other possible Higgs bosons with higher masses. We are excited about the excess at 750 GeV in one decay channel, but we need to establish if this signal is real and if it appears anywhere else before we can say something about it. All we can do today is hypothesize and speculate.”

If this bump is early evidence of a new boson, theorists predict that it will transform into a wide assortments of particles—not just two photons. For instance, a heavier cousin of the Higgs boson would likely behave like the known 125 GeV Higgs boson, which spits out a pair of Z bosons, a pair of W bosons, or a pair of photons when it decays.

Experimentalists recently grouped Z boson and W boson pairs with approximately the same energy and compared the number of pairs-per-group with the predicted totals, which were generated by thousands of computer simulations.

“Evidence of more pairs than predicted materializing yet again at 750 GeV would be exciting,” says Jim Olsen, a professor of physics at Princeton University. “And then the question would be if and how all the observations are related."

But after performing these analyses, scientists are reporting that they haven’t observed anything out of the ordinary in any other channels. Scientists are also mapping the energies of Z bosons paired with a photon, a channel which theorists predict could be a goldmine for new physical phenomena. But the first results also show no anomalies.

Physicists are at the very beginning of LHC Run 2 and have collected about one-tenth as much data as they did during Run 1. The new data comes from collisions that are 1.6 times more energetic than Run 1 collisions and opens up a new energy regime that was not previously accessible. But physicists need time for the data to accumulate.

“We’re expecting to get a factor of 30 times more data over the course of the next three years, which will allow us to probe this higher mass range better,” says Bellomo. “We will resume collecting data again in later spring and should be able to say a lot more about this bump and others searches by the end of the summer.”