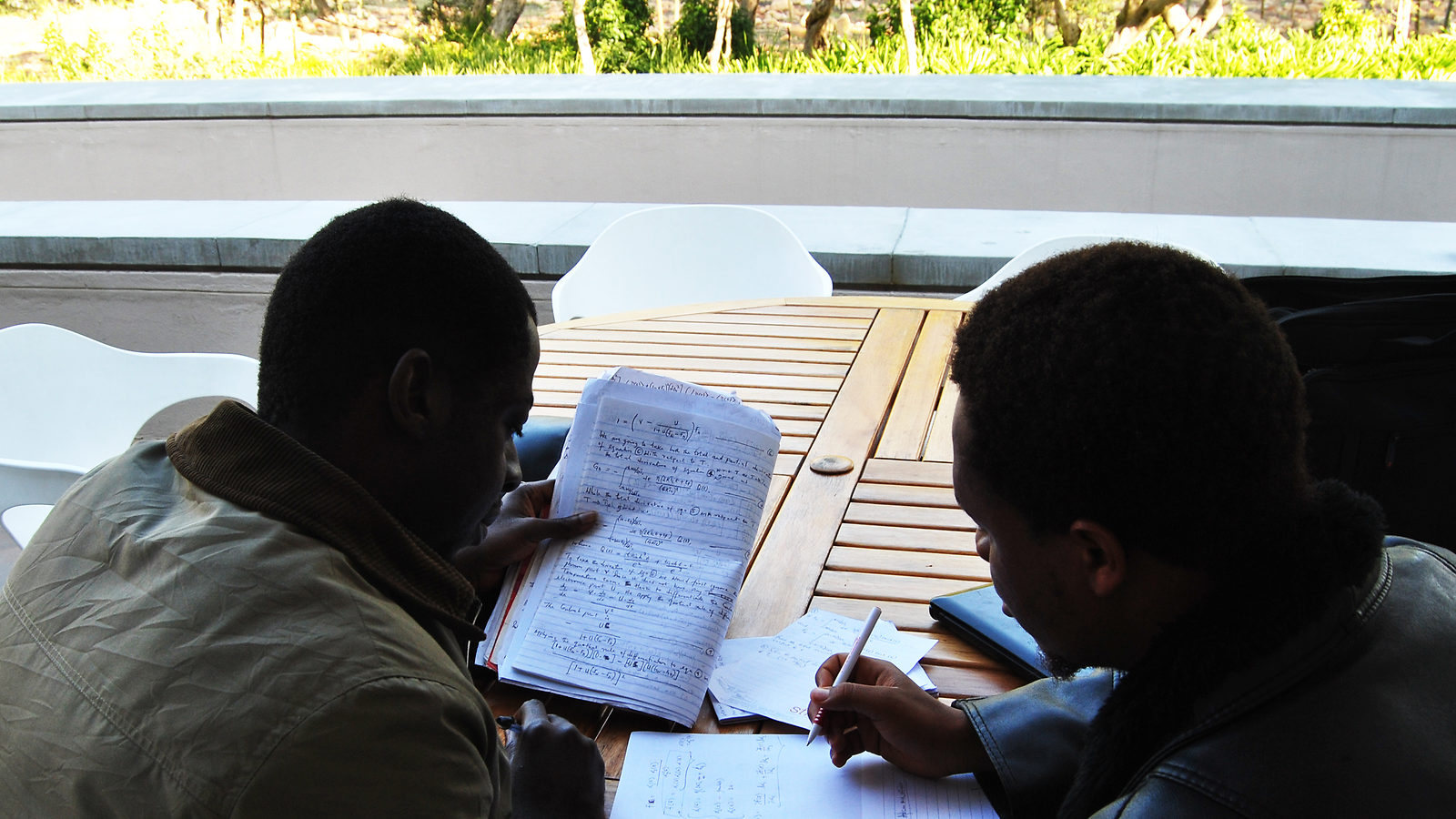 From a young age, Yves Kini has been passionate about physics. But growing up in Burkina Faso in West Africa, he was a more than 600-mile drive from the nearest fundamental physics program at the University of Ghana. He learned from books and documentaries instead.

But attending the African School of Fundamental Physics and Applications in Namibia in 2018, he discovered a different world, meeting role models and peers who shared his interests. “You see people actually like you who actually like what you’re doing,” he says. “It’s like heaven, man.”

The school, which takes place every other year, began in 2010 and has grown its programming and popularity in the years since.

The ASP is a three-week summer program for university-level students from across the continent of Africa. Participants learn about nuclear and particle physics, astrophysics and cosmology, accelerator physics, high-performance computing, quantum information and more. For some students, it’s the first time they hear about some of these topics.

“The best part was talking to our lecturers after the lecture,” Kini says. “You had the chance to talk to anyone, and they will be openly happy to talk to you. And I really loved that.”

The effects of the school are meant to extend far beyond a single summer, says ASP organizer Ketevi Assamagan. Assamagan works at Brookhaven National Laboratory, researching fundamental questions in particle physics, and was born and raised in Gabon and Togo, respectively.

“The idea is to work toward increasing original fundamental physics in Africa and developing a pool of alumni that can really make a difference on the continent,” he says. “We are trying to improve education and increase the talent pool, and hope to retain these people in Africa.” 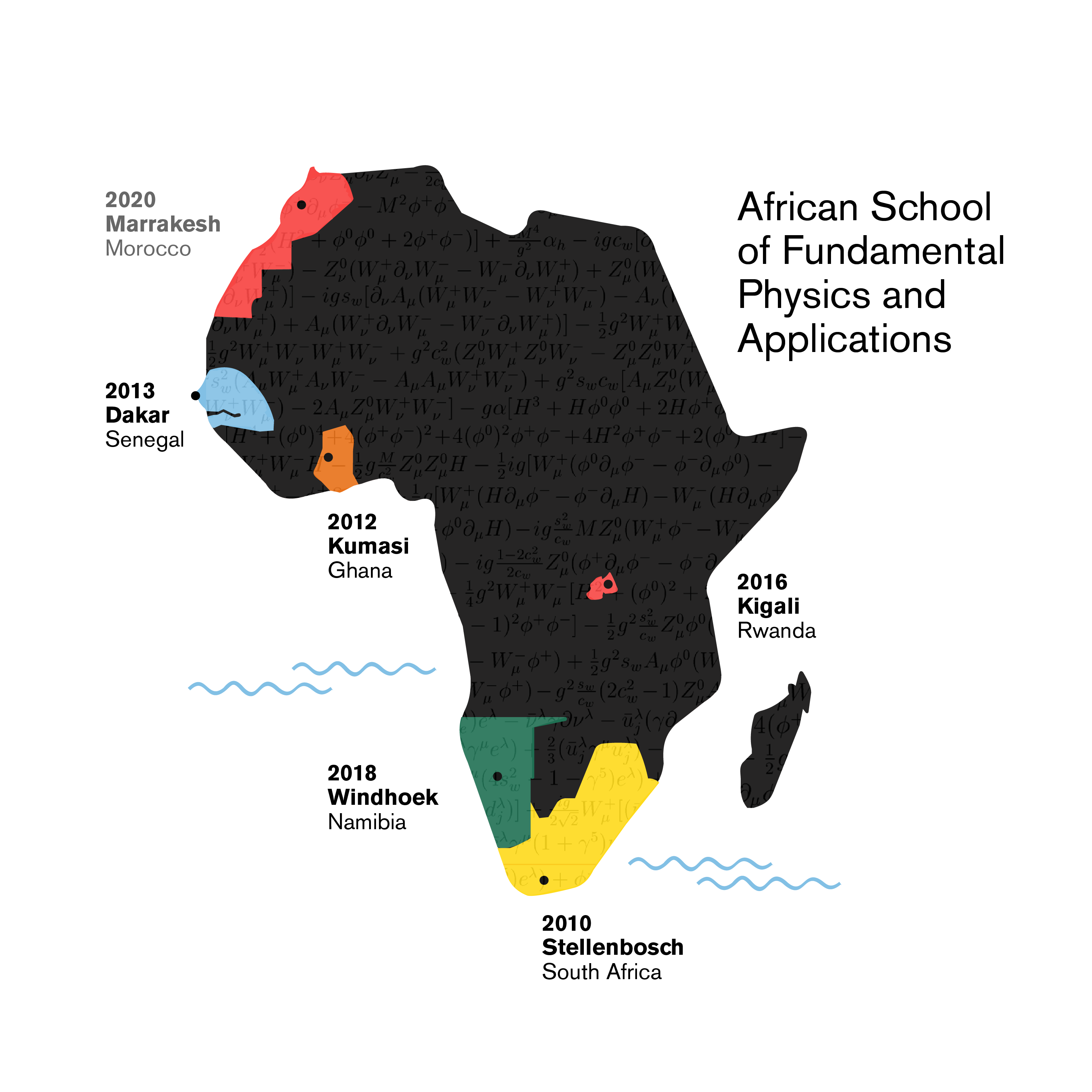 Each year the school is hosted by a different country, selected through an application process that considers the location, level of interest from the local government, and the support available to handle logistics. The school has been hosted in South Africa, Ghana, Senegal, Rwanda and Namibia.

The organizing committee tries to understand the specific physics interests of each host country and then tailors the school curriculum to fit those interests. Organizers encourage hosts to stay connected with their local Ministry of Education (or equivalents), in the hopes that that the school will stimulate a boost in local physics education. “After the school, there could be some momentum built up to support all of the research and educational efforts of the local organizing committee,” Assamagan says.

As interest in the school has grown, the ASP has developed new features and events. 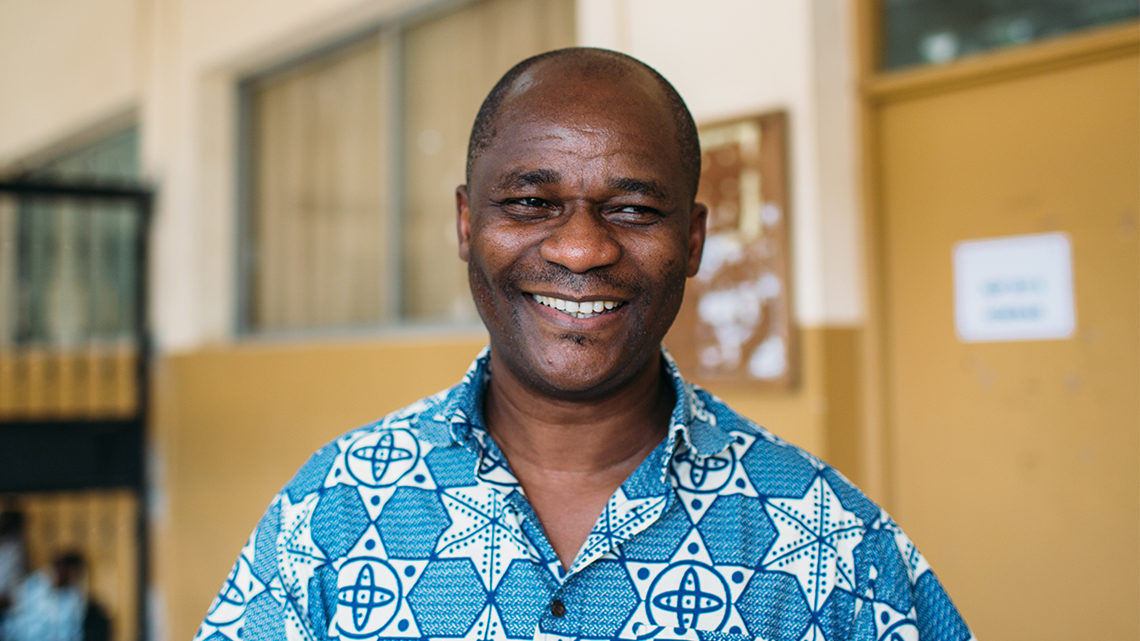 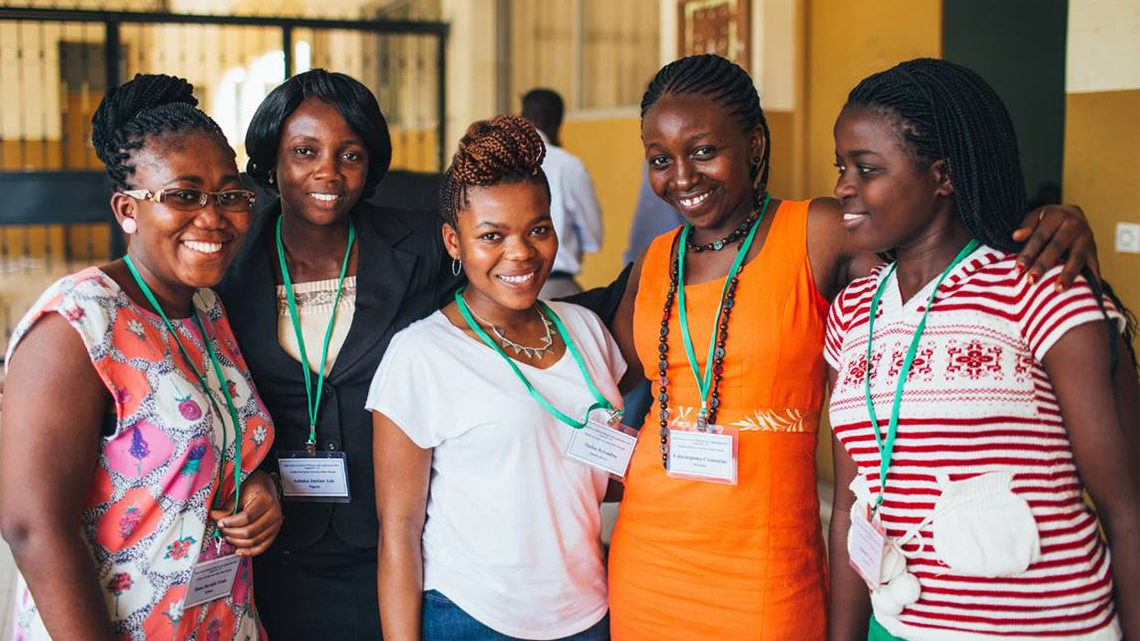 Group of students at ASP 2014 in Dakar, Senegal 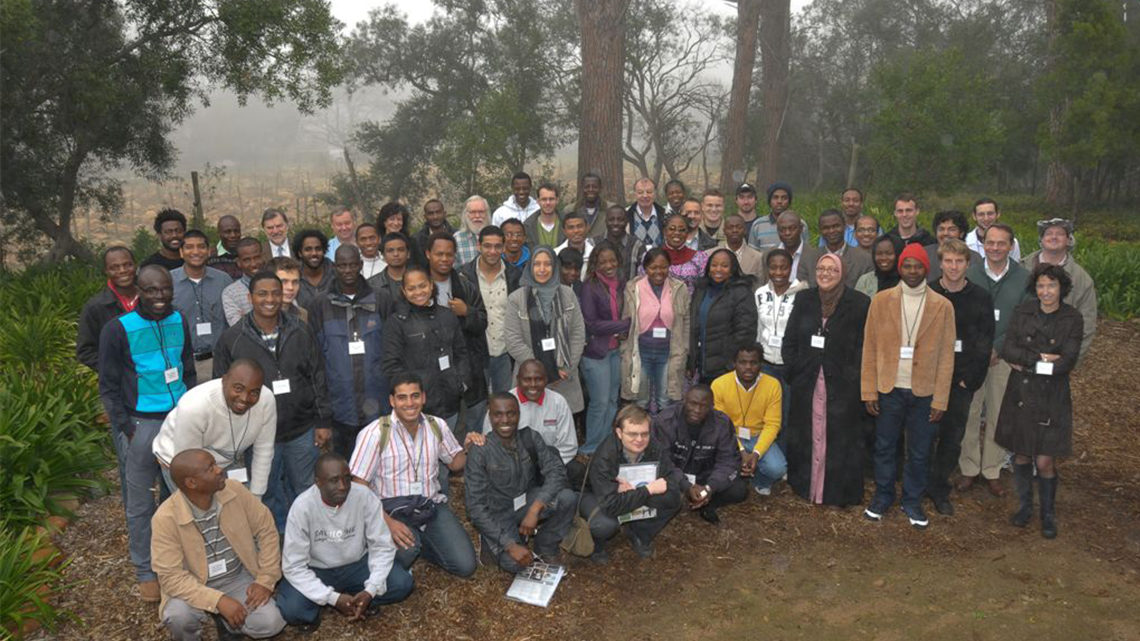 Arrival of the ASP 2010 students in Stellenbosch, South Africa 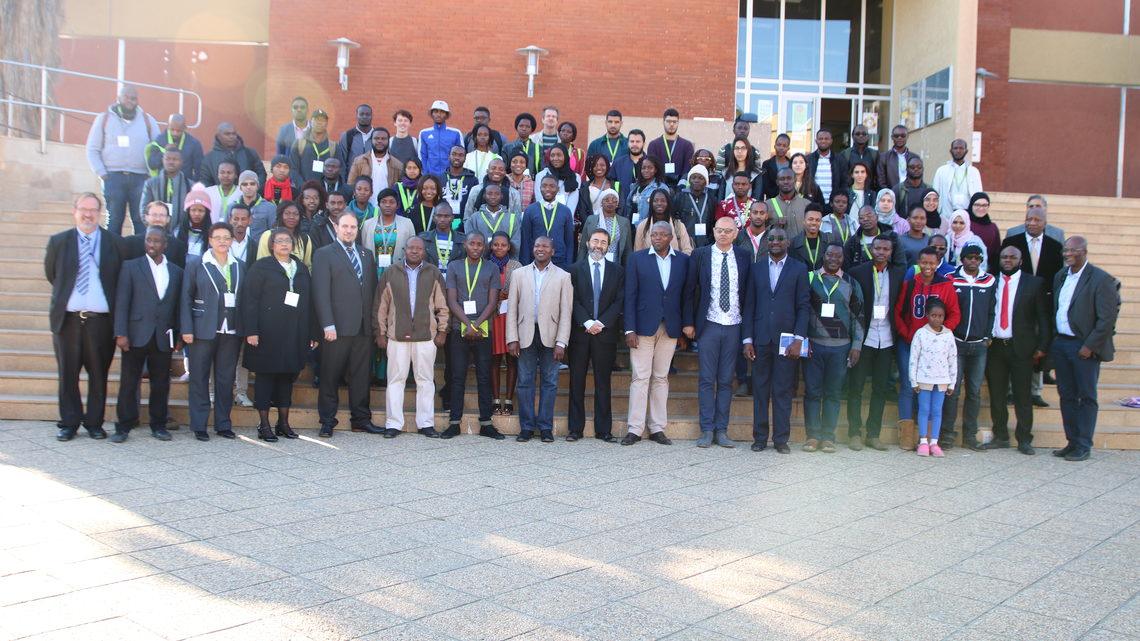 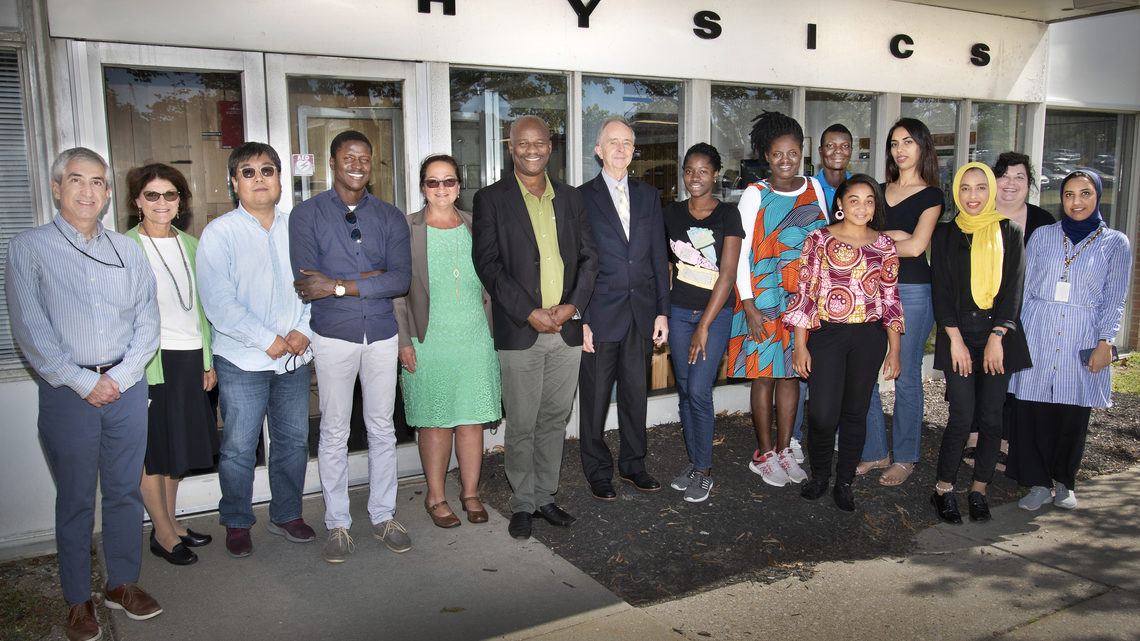 Courtesy of ASP
Previous Next

Its alumni network, for example, enables former students to stay in touch with each other. Alumni are invited to return as lecturers at subsequent summer schools and to sign up as mentors to current students and other alumni.

In 2018, the ASP established the African Conference on Fundamental Physics and Applications. The conference, which takes place alongside the school, gives alumni the chance to give talks on their research and careers, as well as network with each other and current ASP students. Members of the physics community from outside Africa are also encouraged to attend.

The ASP has also extended its reach by hosting events for local high school teachers and students during the school. International experts designed a week-long workshop that provides new ideas and lesson plans for high school teachers that teach physics. In addition, the ASP Learner's Program allows ASP lecturers to visit local high schools in the host country and give presentations and demonstrations about physics.

ASP lecturers come from all over the world—from the host country, institutions in other African countries and institutions abroad such as CERN in Switzerland or Fermi National Accelerator Laboratory in the US. ASP students often go on to do research or complete their PhDs with lecturers from the program.

Diallo Boye, for example, is a PhD student at the University of South Africa and a member of the ATLAS experiment at CERN. He met two of his PhD supervisors at the ASP in 2012, including Assamagan. In fact, the school was where he discovered high-energy physics for the first time.

“I really encourage people to apply to this school,” he says. “It can open up many opportunities for their future.”

Mounia Laassiri, a member of the Organization for Women in Science in the Developing World, attended the school in 2016. She now has a PhD in nuclear physics and works at Brookhaven National Laboratory in the US, where she performs simulation studies of particle detectors. “Being part of this program was the perfect way to start my science career,” she says.

The physics school was also important to Heba Sami Abdulrhaman, who heard about cosmology for the first time at the ASP in 2016. She already held a master's degree in physics, but what she learned at the school inspired her to get a doctorate. “It was just the best thing that happened in my life,” she says.

Now almost finished with her PhD in cosmology, she is starting to look for postdoctoral positions, with a focus on a couple of institutions in the US and Canada.

A full 80% of ASP alumni stay in Africa after the school. The majority of ASP alumni, Assamagan says, are still completing their academic degrees, while about a quarter have found jobs. But so far precious few of those jobs are research positions at African institutions—as not many of those positions exist.

“It's not enough to stay in Africa,” he says. “We really need to do more work to place these people [in research] if they are to help Africa... And that is a big job, and we don't have the solution yet.”

Assamagan is proud of the many alumni the program has produced. “Some of them will become future leaders in Africa and tackle common problems in the community,” he says. “That diverse community of people is coming together to discuss solutions and build friendship, and that may be important to how Africa evolves as a community. It's our own way of finding a place in the world, in the world community. And I think that is actually quite impressive.”

The next school will take place in 2020 in Morocco. Students and instructors can apply to participate at the ASP website now through January 15, 2020.