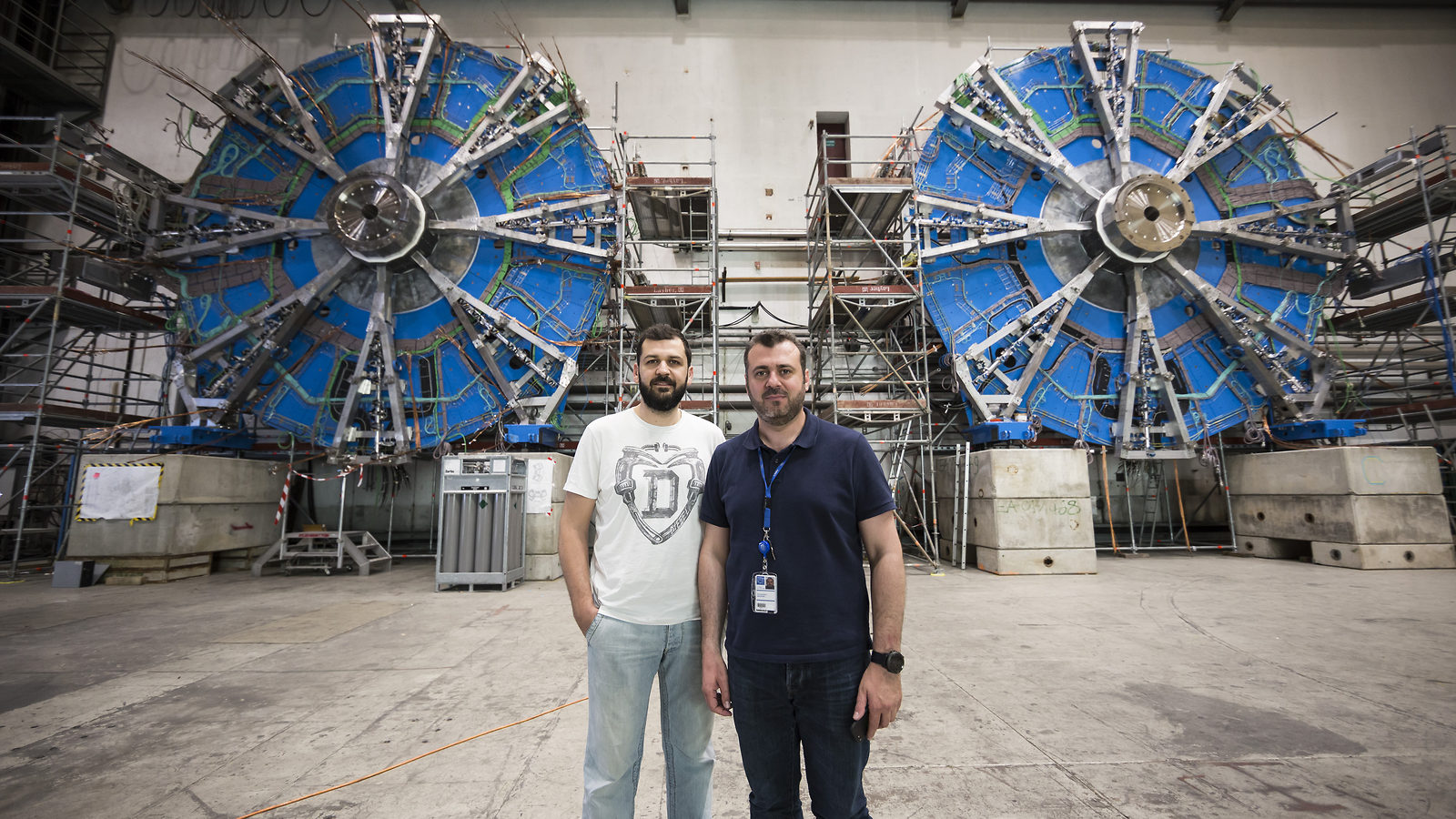 Brothers reunited on the ATLAS experiment

Konstantinos Iakovidis was training in Greece’s Hellenic Army in May 2008 when his younger brother, George, was accepted into the CERN summer student program. When George told Konstantinos he had been invited to move to Switzerland for two months, he cried—and encouraged him to take the opportunity.

Little did Konstantinos know that six years later, he would make his own journey to CERN and would eventually join his physicist brother on the same project, as a mechanical engineer.

As kids, Konstantinos and George acted like most siblings who are two years apart: They fought constantly while maintaining a close bond. Konstantinos says he was rambunctious and more interested in tinkering and building things than sitting in class. George says he was the opposite.

“I was studying from elementary school, always studying,” George says. “We had such different interests, and [Konstantinos] would try to distract me.”

Neither of their parents attended college. Their mother had been discouraged from her interest in pursuing medicine by her traditional parents. Their dad was a technical engineer. Konstantinos worked with him every summer, starting when he was 14. George and Konstantinos say both parents were very supportive of their kids pursing any career that resonated with their interests.

When George started his summer student program at CERN, it was this his first extended time away from his family and Greece. It ended up lasting much longer than he originally expected.

“First it was just supposed to be for a month and a half; then it was prolonged to the entire summer; and in September [2008], I became a CERN User,” George says.

George was working on the ATLAS experiment, one of the four large experiments that records and analyzes the proton-proton collisions produced by the Large Hadron Collider.

Once he started on ATLAS, he never stopped. His undergraduate research transitioned into a master’s degree and in 2010 into a PhD program with the National Technical University of Athens.

As part of his PhD, George started doing R&D for a planned upgrade of the ATLAS muon detection system. He was experimenting with an innovative particle detection technology nicknamed “the resistive micromegas” (for “MICROMEsh GAseous Structure”).

A micromegas detector is made up of a finely woven metallic mesh inside a chamber filled with gas. When a particle such as a muon traverses the detector, it ionizes the gas molecules and creates a cloud of electrons and ions, which are then collected on the strips and the mesh. This generates electric pulses, which are recorded by the read-out chips in the form of what looks like an elaborate game of connect-the-dots. Scientists can trace the pattern of pulses to discover the trajectory of the original particle to within 100 microns.

At that time, Konstantinos was working as a mechanical engineer at a company constructing wind farms in Greece. Encouraged by his little brother, he decided to return to school and pursue a part-time master’s program in renewable energy.

In 2012, the Greek financial crisis hit. Shortly thereafter the wind farm started to flounder. “They told me, ‘we cannot keep you here,” Konstantinos says. 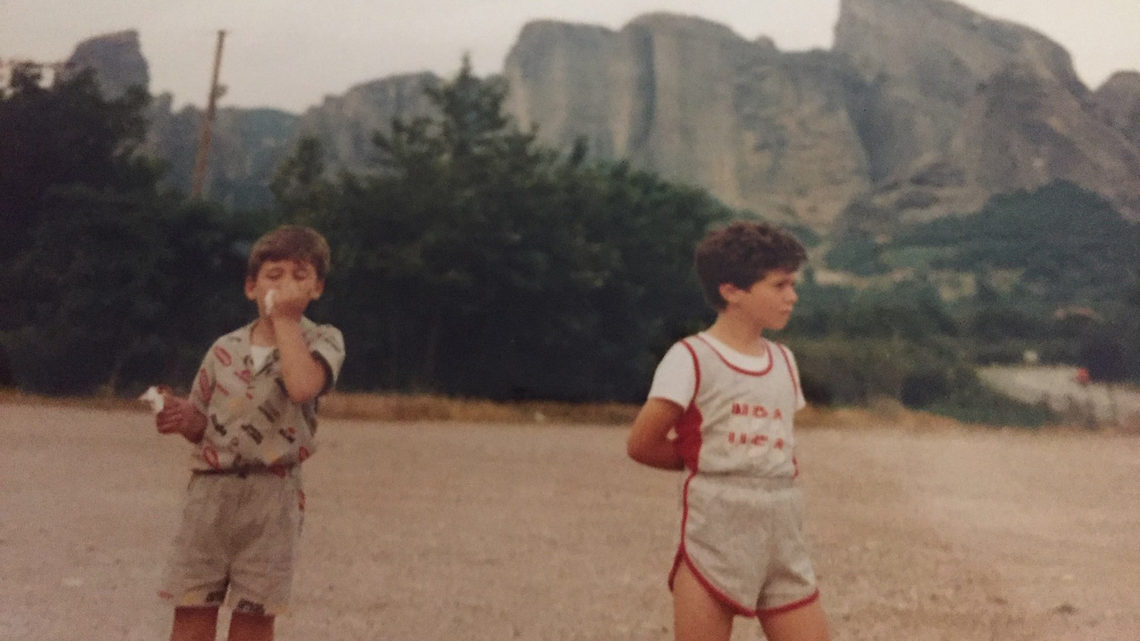 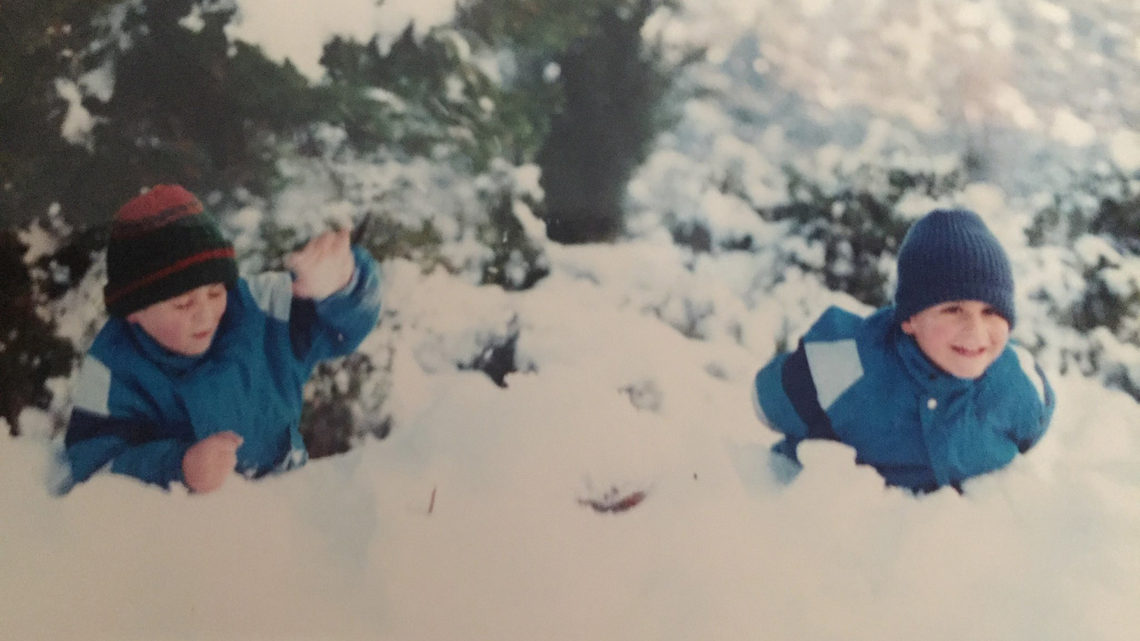 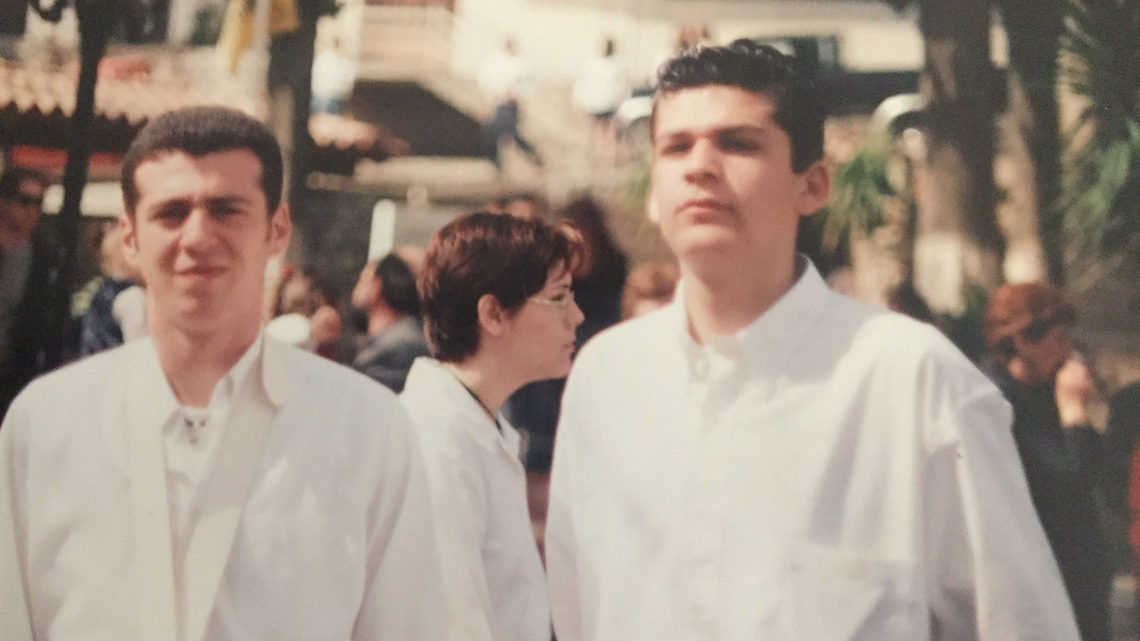 Courtesy of Konstantinos Iakovidis
Previous Next

In total 33 people were laid off from the company. Konstantinos was at a loss for what he should do next. He tried creating his own company in renewable energy. He admits that running a start-up during the worst financial crash of the century, “was not one of my most genius ideas, but I had to do something for living.”

He eventually finished his master’s degree while fixing motorcycles in a workshop he built in his basement.

Back at CERN, George and his colleagues discovered that upgrading parts of the ATLAS detector with micromegas technology would improve their muon-trigger capabilities by rejecting the unneeded background, better enabling physicists like George to find the most interesting events from the 600 million collisions the LHC generates every second. It would keep ATLAS in step with the planned upgrades to the LHC, which will eventually increase that collision rate by at least a factor of 10.

“This was a long period of extensive R&D by a relatively small team,” George says. “We would do everything: setting up the detectors; writing the data acquisition software; developing new reconstruction techniques; analyzing the data; and testing the detectors under challenging conditions. I learned a lot.”

When Konstantinos finished his master’s degree, George suggested he check the CERN jobs website to see what was available. “I told him, ‘They’re always looking for mechanical engineers,” George says.

They were. Konstantinos applied for a position in CERN’s cryogenics department and was accepted. In December 2014, he followed his brother to Switzerland.

Due to a mix-up about his start date, Konstantinos lived with George and George’s fiancé, Asteria, for the first month while he enjoyed an unexpected vacation. Every day George would go to CERN, his fiancé would commute to Lausanne for her job as an oncologist, and Konstantinos would take care of the household and cook elaborate and delicious meals for everyone. George wouldn’t let Konstantinos smoke inside, and Konstantinos couldn’t stand the cold outside, so he quit smoking entirely. “I wasn’t used to Geneva winters,” Konstantinos says.

Konstantinos started his contract with CERN at the beginning of 2015. For two and a half years, he refurbished the infrastructure for a new cryogenic test station, developed the piping and instrumentation diagram for a project call FAIR, and designed and implemented the new liquid-nitrogen distribution system for CERN’s Super Proton Synchrotron accelerator.

In 2017, his projects began to wrap up. Once again, he found himself looking for a job.

On June 5, 2017, he received an email from Stephanie Zimmerman, the Project Leader of the ATLAS New Small Wheel, one of the experiment’s largest upgrades—the one George was working on.

“They needed someone to design and supervise the installation of the New Small Wheel services on the mechanical structure, starting on the first of July,” Konstantinos says. “She asked me if I was free for an interview.”

The New Small Wheel is composed of two disks that will nestle between the endcap toroid magnet and the calorimeter on each side of the ATLAS experiment. Even though “small” is part of its name, it is 9 meters in diameter. Each wheel will eventually hold 16 wedge-shaped detector slices (which in turn, will each consist of 16 detecting layers).

Konstantinos was hired. For him, working on a project like the New Small Wheel is a dream come true. It’s big, ambitious and requires a lot of creativity to bring all the different aspects together. While George—now a staff scientist at the US Department of Energy's Brookhaven National Laboratory—builds the electronics and oversees the detector integration, Konstantinos is figuring out how the cooling, electricity, fiber-optic cables, electronic crates and all the other services can fit onto the two circular support structures.

Every day, George, Konstantinos and a small group of friends and coworkers meet at CERN for lunch and check in about the project. As two brothers who grew up with divergent interests and career paths, they say they feel fortunate to have found a place where their unique perspectives and experiences overlap. (And as brothers who are not completely free of their friendly sibling rivalry, they’re also grateful that they’re working on separate aspects of the project.)

While there’s a lot of New Small Wheel talk when they’re lunching together at CERN, outside working hours, they have a different focus: the next generation of Iakovidis kids—growing up like their fathers, side-by-side.