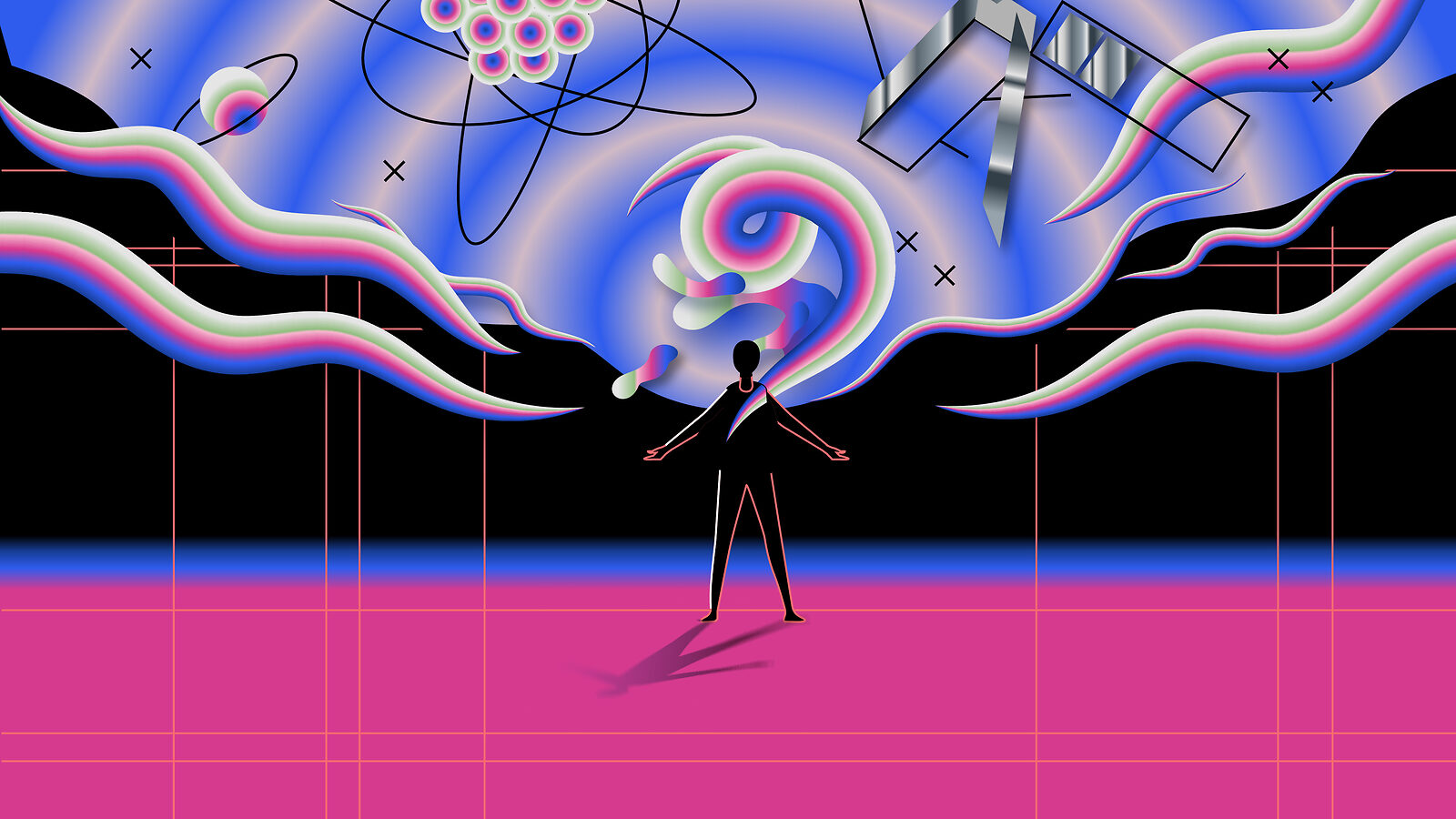 Sometimes, to fit in at a scientific conference, physicist Jessica Esquivel has felt the need to shrink. She checks her hair, her clothes, her voice. She makes sure that they’re not too big or too colorful or too loud—because if they are, people around her might notice that her identity is more than just “physicist.” And they might treat her as less of a scientist.

Of course, every scientist is more than just their profession. But Esquivel’s additional identities—Black, Latina, woman, lesbian—are not the kinds that others consider neutral, the kinds that can easily fade into the background. So sometimes, to stop them from attracting too much attention, she purposefully works to keep them dim.

“We do a lot of conforming and contorting into what a physicist should look like.”

In 2018 Esquivel was invited to the Southwest Research Institute in San Antonio to give a talk. It was part of Día de la Física, a celebration of physics at the annual meeting of the Society for Advancement of Chicanos/Hispanics and Native Americans in Science, or SACNAS.

Just as there are more layers to scientists than their science, SACNAS is more than a professional organization for scientists.

The stated goal of SACNAS is “fostering the success of Chicanos/Hispanics and Native Americans, from college students to professionals, in attaining advanced degrees, careers and positions of leadership in STEM.” Esquivel kept that in mind in preparing her presentation.

“Science seminars are usually dry, science-jargon-heavy, lack visual design in the slide deck and, in my opinion, are aimed at creating a hierarchy of those that are smart enough to understand said jargon and those that aren't,” Esquivel says.

“My talk was the opposite.”

Instead, she drew audience members in by telling her personal story, interweaving explanations of her area of research throughout. Not only did she stop trying to hide the various parts of herself, she let them shine, switching between English and Spanish the way she used to with friends and neighbors as a kid in McAllen, another Texas border town.

“It was the first time that I’ve been to a conference like that,” she says. “It felt very comfortable. It felt like coming home.”

After her talk, Esquivel and colleagues from the US Department of Energy’s Fermi National Accelerator Laboratory stayed to talk with students about internships. At least two of them were accepted to Fermilab’s 2019 Summer Internships in Science and Technology program.

Esquivel says that over time she’s become more confident in herself as a scientist and less likely to code-switch to try to fit in.

“We do a lot of conforming and contorting into what a physicist should look like, how they should work, how they should act,” Esquivel says. “The biggest impact that I’ve had from going to SACNAS—and from identity-based conferences more broadly—is the fulfillment, the affirming that you feel being in a space where we’re still STEM practitioners, but we’re also human beings.”

SACNAS was launched in 1973 at a meeting called by biochemist Alonzo Atencio, then assistant dean for student affairs and director of minority programs at the University of New Mexico’s School of Medicine.

Atencio invited the Chicano and Native American scientists he knew of to discuss their small numbers in academia and government agencies. Attendees came from different areas of science, including chemistry and biochemistry, biology, physics and mathematics—but there were only 17 of them. They joked that the entire community of Chicano and Native American scientists could fit inside an elevator.

“Our founders realized that there are multiple reasons, very complex reasons,” for their small numbers, says current SACNAS President Pamela Padilla, who has been involved with the organization for more than two decades. “But if you have a network of individuals, that adds a mechanism to be able to advocate for these individuals, whether it be to the federal agencies, to universities, et cetera.”

Since that humble first meeting almost 50 years ago, SACNAS has rapidly grown. As of its 2020 annual report, it had 8296 members.

Students comprise 55% of the membership, and professionals make up the remainder. The majority—56%—identified themselves as Hispanic/Latinx.

“It’s a 100% inclusive organization,” Padilla says. “That means anyone can become a member.”

Though SACNAS has grown considerably, STEM fields are still much less diverse than the US population, Padilla says. Many people join SACNAS to find a community that is entirely missing from their institutions.

When detector operator Corey Gray was an undergrad, he had no idea there were other people like him in physics. Gray is half Native American and a member of the Siksika Nation, one of the four nations of the Blackfoot Confederacy.

He discovered SACNAS when he was in college, but he began attending with regularity only in 2008, when he and a colleague began going to represent the Hanford Observatory for the Laser Interferometer Gravitational-Wave Observatory, LIGO.

Gray describes himself as “a reluctant science communicator.”

“I’m a little shy or introverted,” he says. “I’d rather just be out in the lab, turning a wrench or behind a computer, operating a gravitational wave detector.”

But he says he does outreach through organizations like SACNAS to let Native American students know that they aren’t alone.

A professor of biological sciences and dean of the College of Science at the University of North Texas, Padilla says she spent many years as the only Hispanic woman in the sciences at her university. “We now have some associate professors, but if you look for full professors and within leadership positions, you don’t see much representation,” she says. “And we’re a Hispanic-serving institution.”

To grow that representation, SACNAS aims to provide networking and mentorship opportunities for members.

Mario Borunda, who is Hispanic, says he saw that firsthand at his first national SACNAS conference, which he attended an undergraduate student at the University of Texas at El Paso. “Going to that SACNAS meeting was really important, because I got to meet somebody that was interested in improving the diversity of their program,” he says.

At the 2010 SACNAS national meeting, Steve Greenbaum, a professor of physics at the City University of New York, saw Borunda’s poster presentation. Greenbaum discussed a job opportunity with Borunda and eventually became his mentor as well.

That mentorship was key to preparing Borunda for a faculty position, Borunda says. He says it was invaluable to have someone to ask questions and ask for advice on topics such as how to determine how much funding to ask for when starting a research group.

Borunda is now an associate professor of physics at Oklahoma State University. Since 2013, he has served as advisor for the SACNAS chapter there.

Later this year, SACNAS will release its strategic plan, Padilla says. “And part of that plan is, really, to grow in terms of representation.”

The goal isn’t new. In 2019, SACNAS embraced another community—Native Hawaiians—by bring the annual conference to Hawai’i for the first time. More than 5000 people attended.

One of the local organizers was Lelemia Irvine, an assistant professor of physics at the University of Hawaiʻi – West Oahu.

Irvine was the first Native Hawaiian to enter a PhD program in engineering at the University of Hawaiʻi at Mānoa. In 2019, he became the second Native Hawaiian from his university to graduate with a PhD.

SACNAS was important to him, he says, as it was a place for people who feel like outsiders to belong. “I’ve made lifetime relationships at SACNAS,” he says.

When SACNAS came to Hawaiʻi, Irvine says, “the advisory committee prioritized showing respect for the culture by working with us.

“We did the first ever kīpaepae—traditional welcoming—ceremony there at the conference, with the pahu drums, with the chanting, with the hula, with the everything meant to honor this sacred first landing,” he says. “We went through the proper permissions with our community to engage in ceremony.”

The ceremony was modified to fit into a 30-minute time slot. If SACNAS returns to Hawai’i, Irvine says, he would like to see the next ceremony expand to its traditional, longer timeline “that allows for every person to be welcomed.”

After all, SACNAS is all about letting scientists be their full selves.