Three theoretical physicists have won the Breakthrough Prize for developing a way to connect general relativity with particle physics. 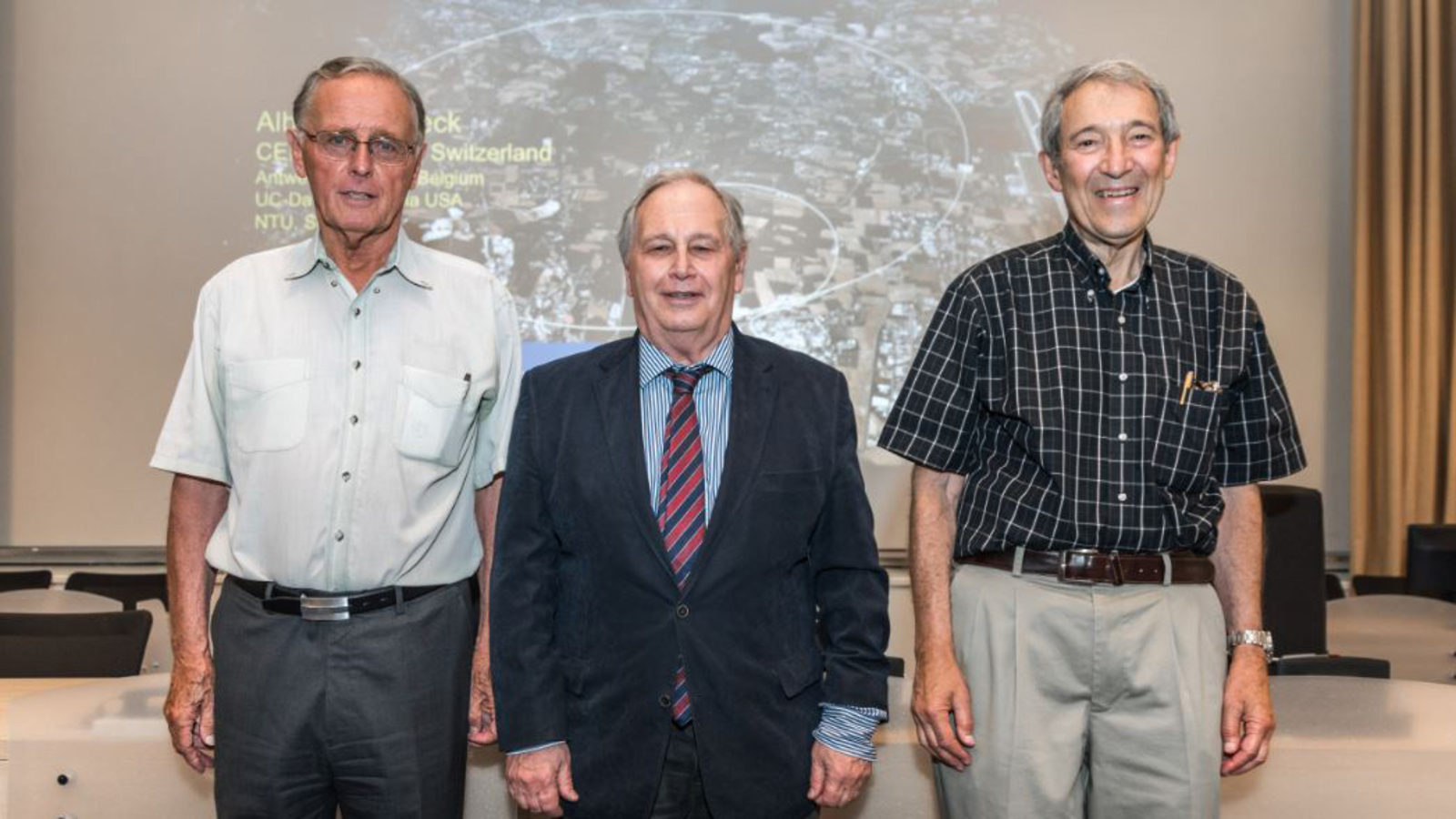 Our world is governed by general relativity, which sees gravity as the effects of massive objects warping spacetime. The world of particle physics, on the other hand, envisions all forces as mediated by force-carrying particles—and ignores gravity entirely.

Today, the Breakthrough Prize in Fundamental Physics was awarded to three theorists who proposed a way to marry these contradictory descriptions: with a theory called “supergravity.”

Supergravity builds upon a popular concept called supersymmetry. Supersymmetry rounds out the mathematics of the Standard Model of particle physics—the best description physicists have of the rules and players in the subatomic universe—by adding a host of new particles to the mix. Supergravity takes supersymmetry one step further by adding gravity, via two new particles called the graviton and gravitino, and a new mathematical interpretation of spacetime.

The award goes to physicists Sergio Ferrara, Daniel Z. Freedman, and Peter van Nieuwenhuizen, who started developing the theory of supergravity at CERN in Geneva and completed it in 1976 at Stony Brook University in New York. The theory has not been proven experimentally, but it has remained influential in the decades since it was first proposed.

The winners will split $3 million in prize money and receive the award in a star-studded, televised ceremony.

“When you formulate a theory, you do not know if this theory will exist in 40 years,” says Ferrara, now an emeritus theorist with CERN and the Italian laboratory system, INFN. “After more than 40 years, this theory is being recognized for its crucial impact on the development of particle and mathematical physics. This is something which makes us very happy.”

Ferrara, Freedman and van Nieuwenhuizen started their work on supergravity during a crucial moment for particle physics. During the 1960s and early 1970s, the physics community was synthesizing their collective knowledge about subatomic particles and fundamental forces into what is now the Standard Model.

But the Standard Model had (and still has) a few major limitations. “I came from studying quantum corrections to Einstein’s general relativity,” says van Nieuwenhuizen, now a distinguished professor at Stony Brook University. “In all the models, the quantum corrections were infinite. The aim was to find a magical model in which all the infinities would cancel.

“Supergravity is that Holy Grail, at least for the first few orders of corrections.”

In supergravity, quantum variables are part of the geometry of spacetime, Ferrara says. In this way, supergravity is not competing with general relativity, but rather expanding our understanding of how spacetime functions from a mathematical perspective.

By adding new dimensions to spacetime, supergravity opened the door for string theory and bolstered the budding idea of supersymmetry. Even theories about quantum back holes and holographic universes are indebted to the earlier work done for supergravity.

The ideas of supersymmetry and supergravity are compelling—so compelling that physicists are still searching for experimental evidence that can confirm their predictions.

“The most crucial question in supergravity can only be solved by experimental physicists, namely the discovery of supersymmetric particles,” van Nieuwenhuizen says.

Scientists were hoping that evidence of these particles might show up in the experiments at the Large Hadron Collider. So far, they have yet to appear. Today, physicists are expanding their searches to look for non-traditional signatures of new particles, including those predicted by supersymmetry and supergravity. They are also precisely measuring known processes to see if there are inconsistencies with the predictions of the Standard Model.

“Let us hope that nature is aware of our efforts,” van Nieuwenhuizen says. “This beautiful mathematic model has already contributed in physics and even more so in mathematics by solving long-standing problems. I hope that it is more than a tool in math and physics, and rather a physical reality.”

The idea for supergravity grew from knowledge of force-carrying particles, those associated with the strong, weak and electromagnetic forces, Freedman says. Those have already been detected in nature and, “in my opinion, the chances are good that nature knows about supergravity also,” he says.

Planned upgrades to the LHC in the mid 2020s will provide physicists with an order of magnitude more data to continue searching for any new particles that might be out there to find. For Ferrara, he thinks it’s only a matter of time before supergravity gets its day in the sun.

“It took almost 60 years to discover the Higgs boson after it was predicted,” he says. “We will need a similar amount of time for supergravity.”