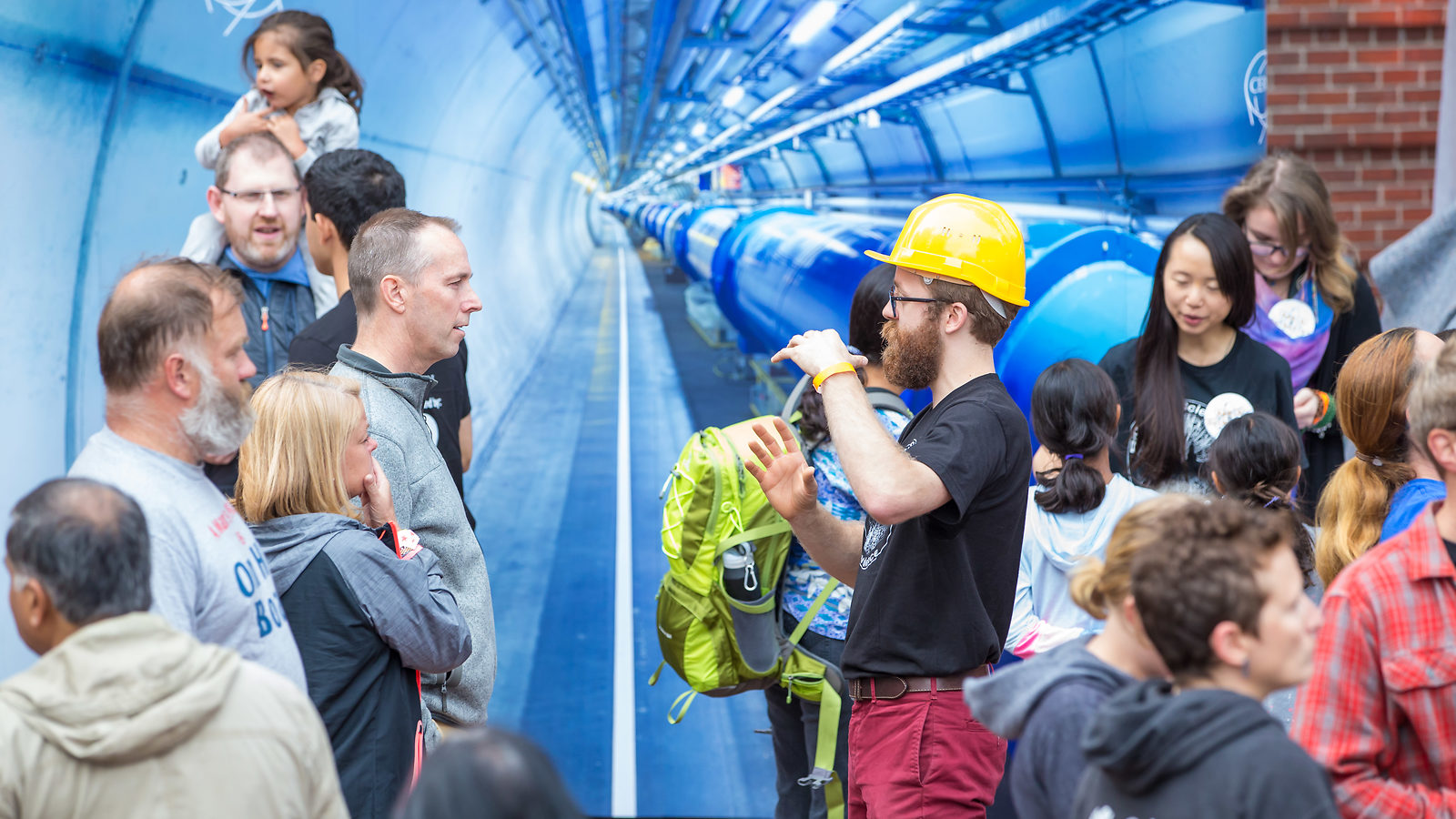 Each year, three rivers in downtown Providence, Rhode Island, are lit by a series of blazing bonfires. The dazzling display has attracted hundreds of thousands of visitors to the city since artist Barnaby Evans ignited the first ones in 1994.

On a dozen Saturdays, the fiery installation is the centerpiece for an annual arts festival known as WaterFire Providence. The Big Bang Science Fair, an event filled with presentations, workshops and hands-on activities covering a wide range of scientific disciplines, debuted at WaterFire last year—and will make its second appearance later this month.

From CERN to Providence

Particle physicist Meenakshi Narain moved to Providence more than a decade ago after accepting a professorship at Brown University. After attending several WaterFire events over the years, Narain began to wonder how she might get involved.

Narain, a member of the CMS experiment at CERN, had many years of experience communicating science produced using the Large Hadron Collider to the public, and she saw a chance to bring this knowledge to a new audience.

“WaterFire is an event where the local community bonds,” Narain says. “You go with your family, and you can enjoy music and food in an open environment that’s accessible to everyone.”

When the discovery of the Higgs boson captured headlines around the world in 2012, Narain saw an opportunity. Shortly after, she contacted Evans to propose the idea of bringing particle physics to the fair.

“We were absolutely delighted when Meenakshi came to us,” Evans says. “People who are interested in science tend to find it. What we need to do is bring science out to the broader public who have a limited exposure to science and don’t quite understand it.”

The event, which was dubbed the Big Bang Science Fair, was initially meant to be LHC-focused. But as Narain began planning the program, she quickly recognized that there was a wide range of science going on in Providence, the home of several college and university campuses, including Brown. “We realized that we should broaden the vision to communicate the enthusiasm about science in general,” Narain says.

To organize the fair, Narain gathered a group of 10 individuals, including professors at Brown, colleagues from CERN, and members of the Providence community. Together, the team, which was co-led by Narain, Brown University physicist Ulrich Heintz, and CERN’s event manager Connie Potter, organized a final agenda that contained exhibits encompassing a variety of STEM disciplines, including neuroscience, engineering, computer science, physics and chemistry.

“Meenakshi’s vision is to bring science to the people,” says Geoffery Gunter, a member of the Big Bang Science Fair organizing committee from Citizens Bank, one of the event’s sponsors. “She's a great leader and I've really been inspired by her.” 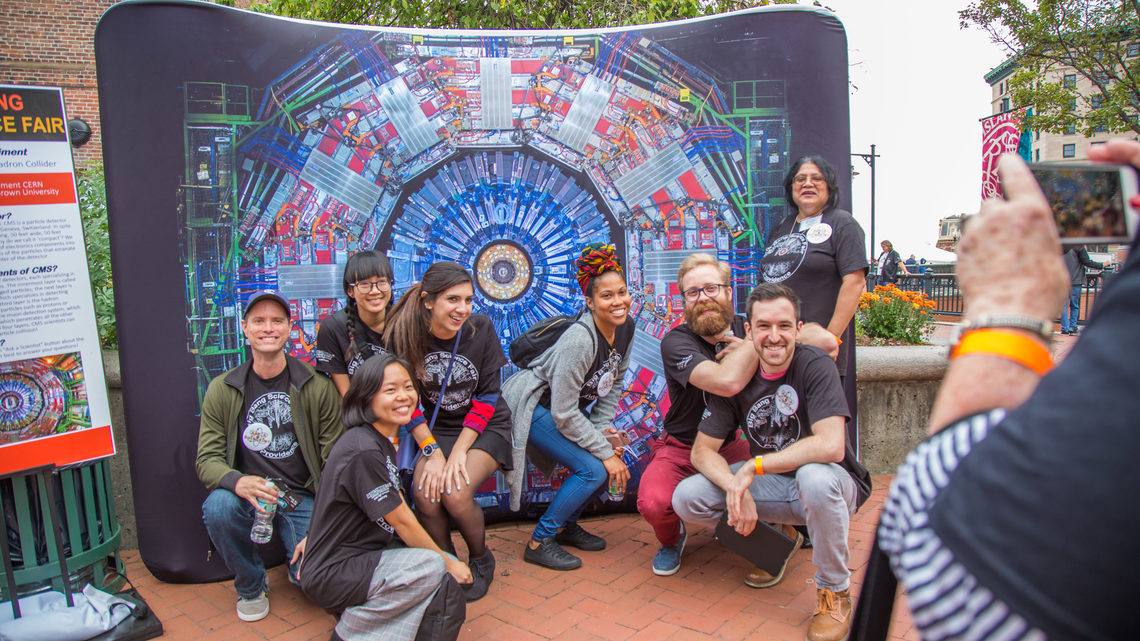 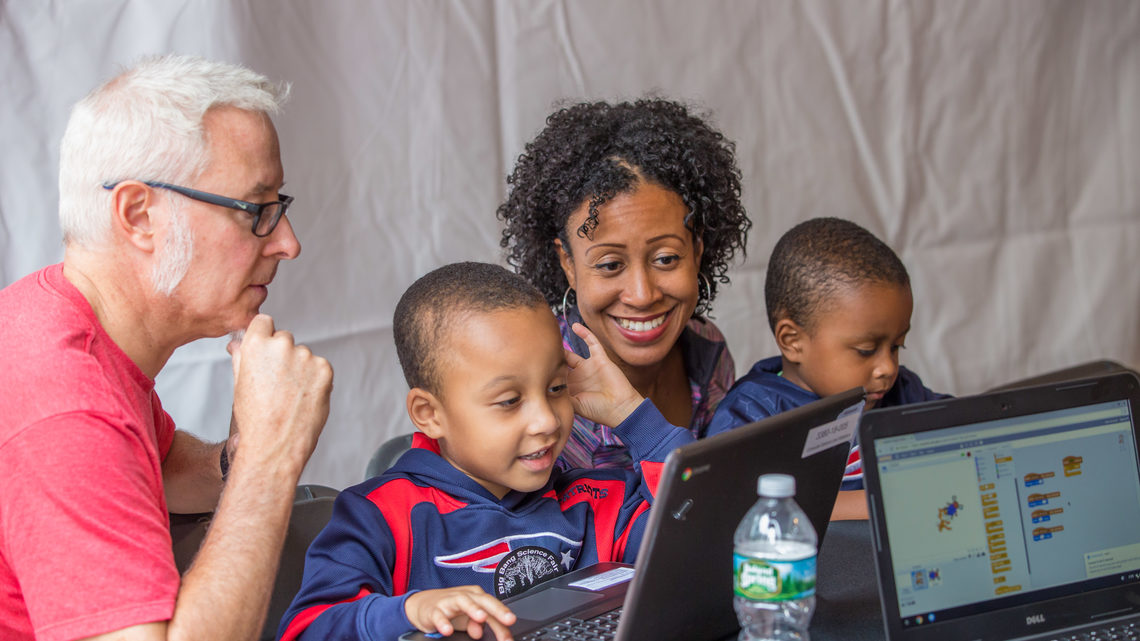 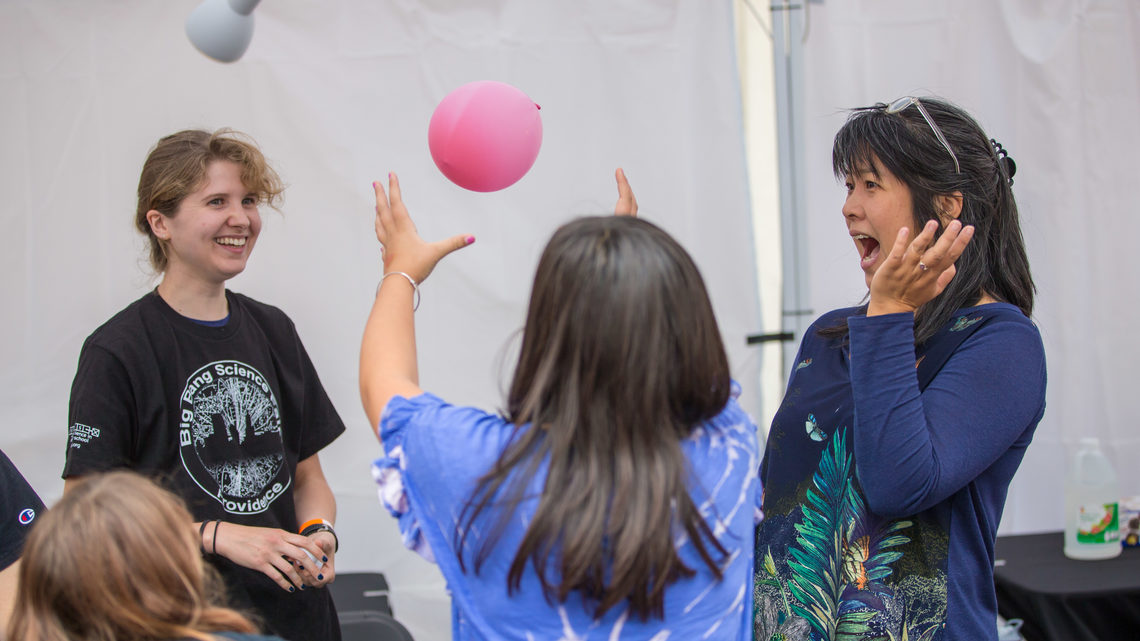 Participants marvel at a levitating balloon in an activity led by then chemistry graduate student Jennifer Ruddock (who has since earned her PhD). 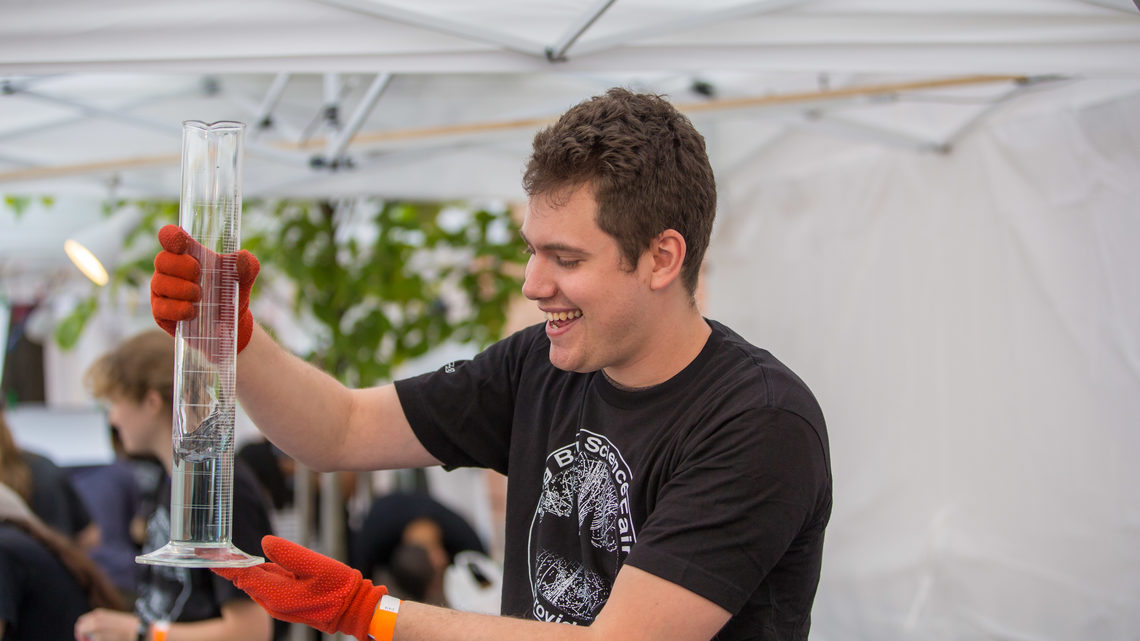 Volunteer and chemistry graduate student Nathan Goff talks about polymers during a demonstration. 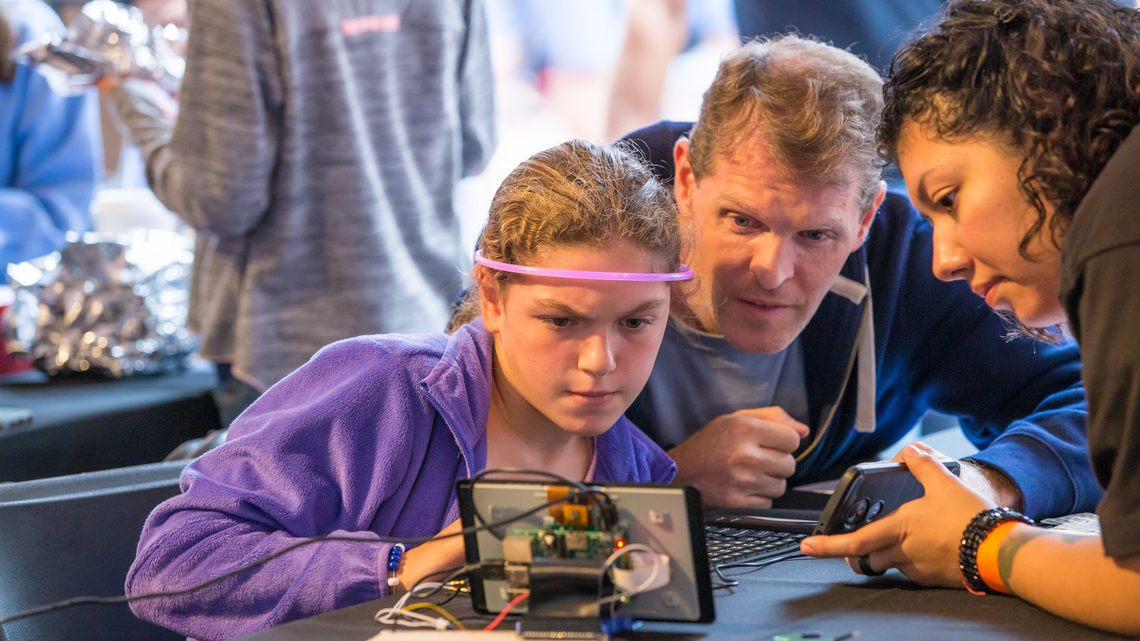 A family participates in a hands-on computer-science activity. 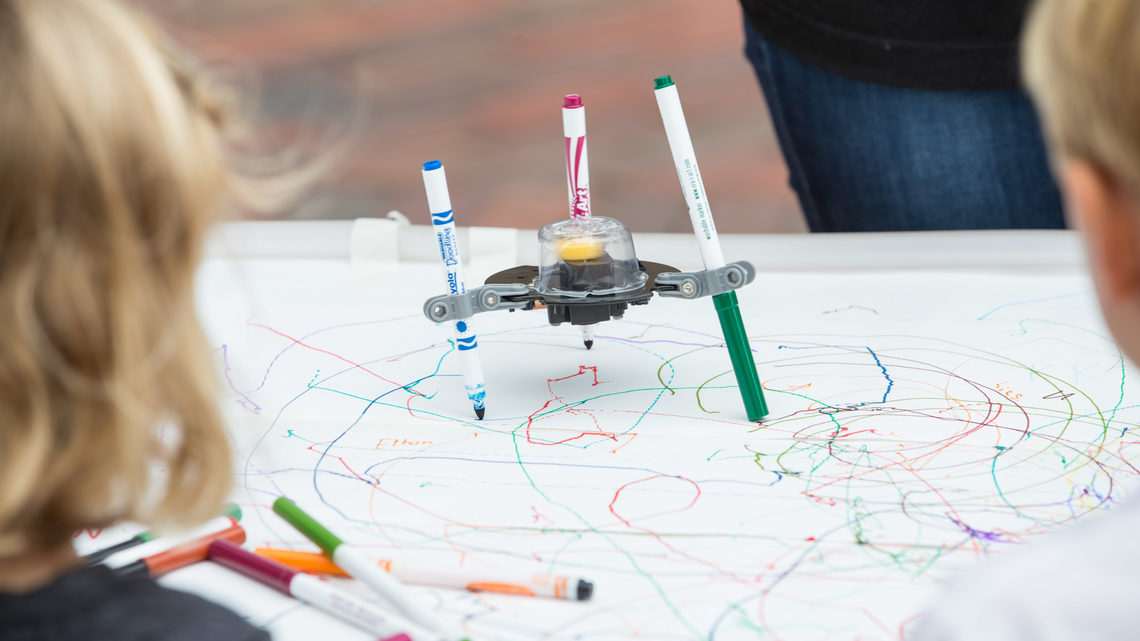 Participants try an activity led by RI Museum of Science and Art called "creating your own colored top.” 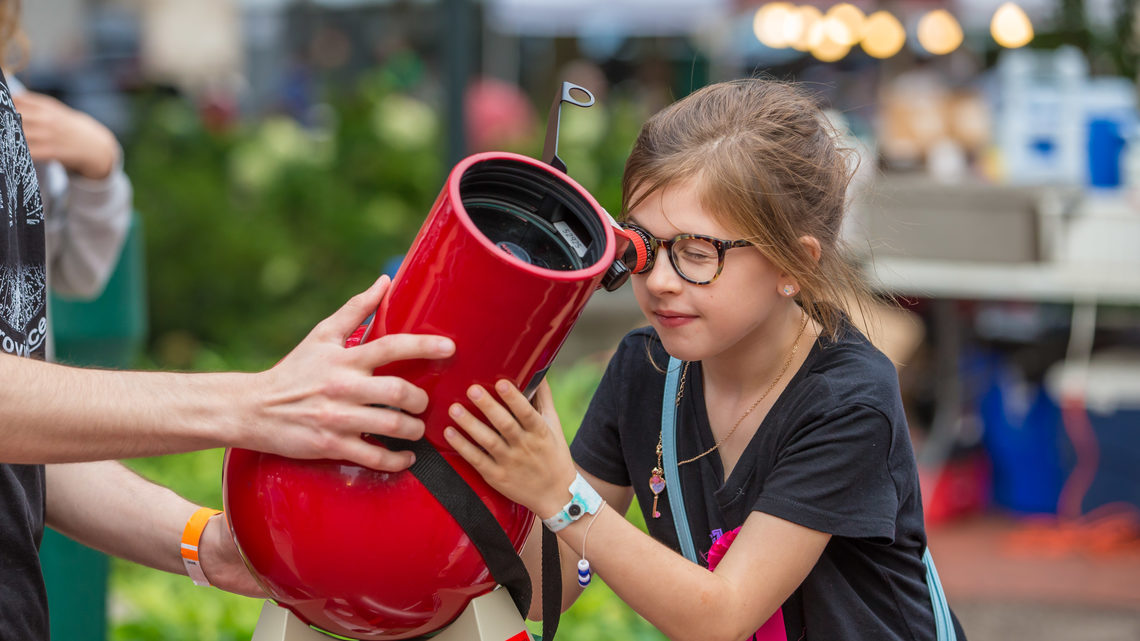 A participant views the sun through a solar telescope. 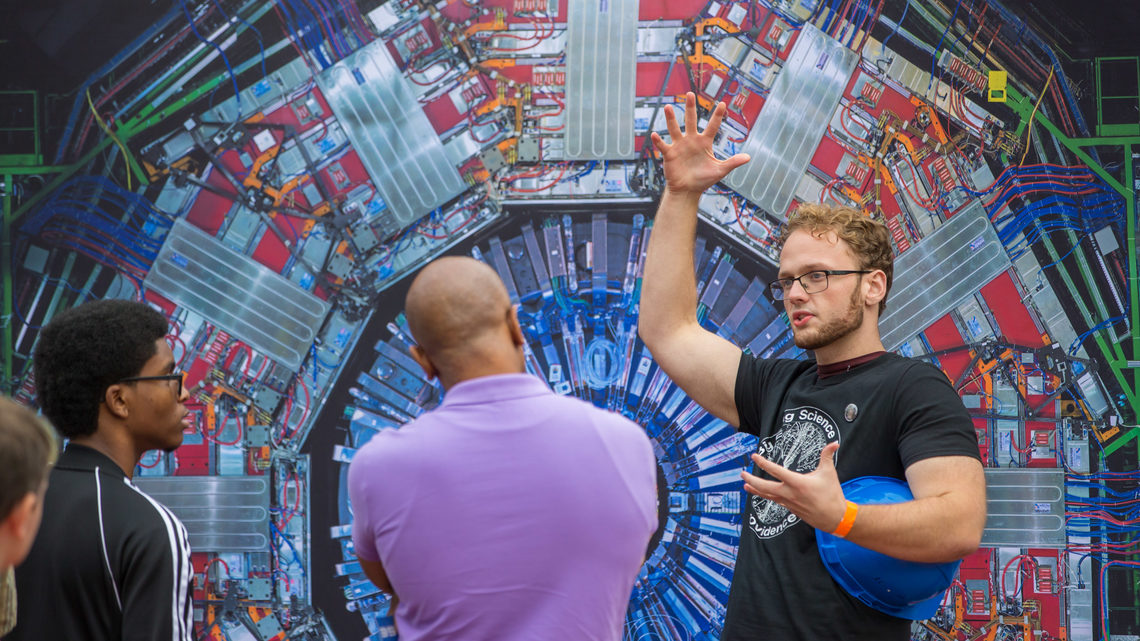 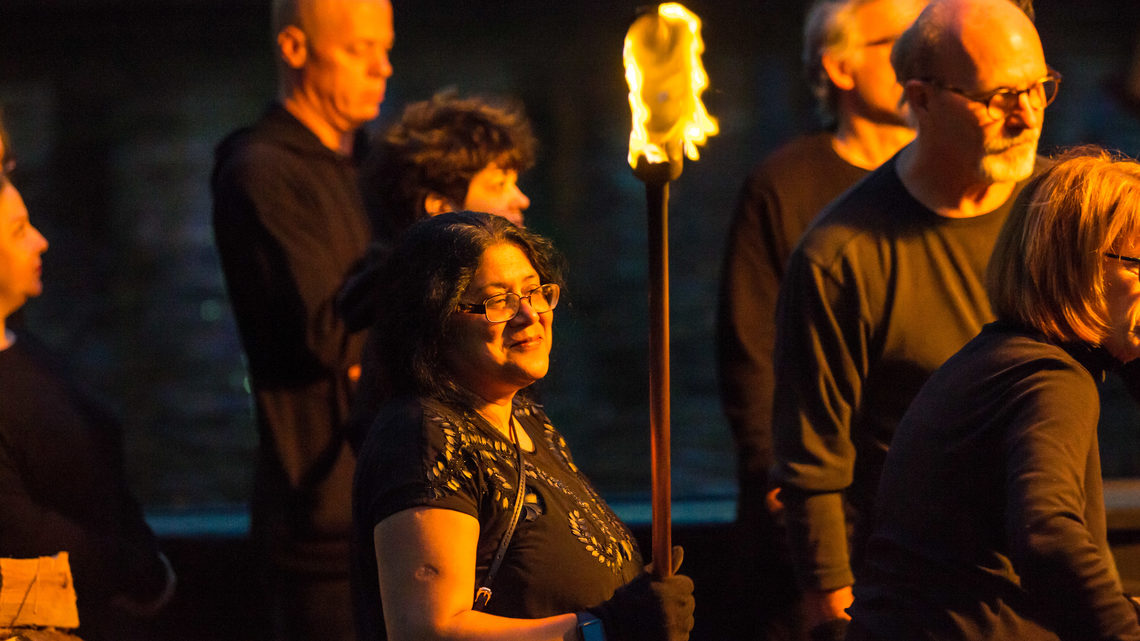 Brown University physicist and organizer of the Big Bang Science Fair Meenakshi Narain leads the lighting of the fires on the Providence River for WaterFire. 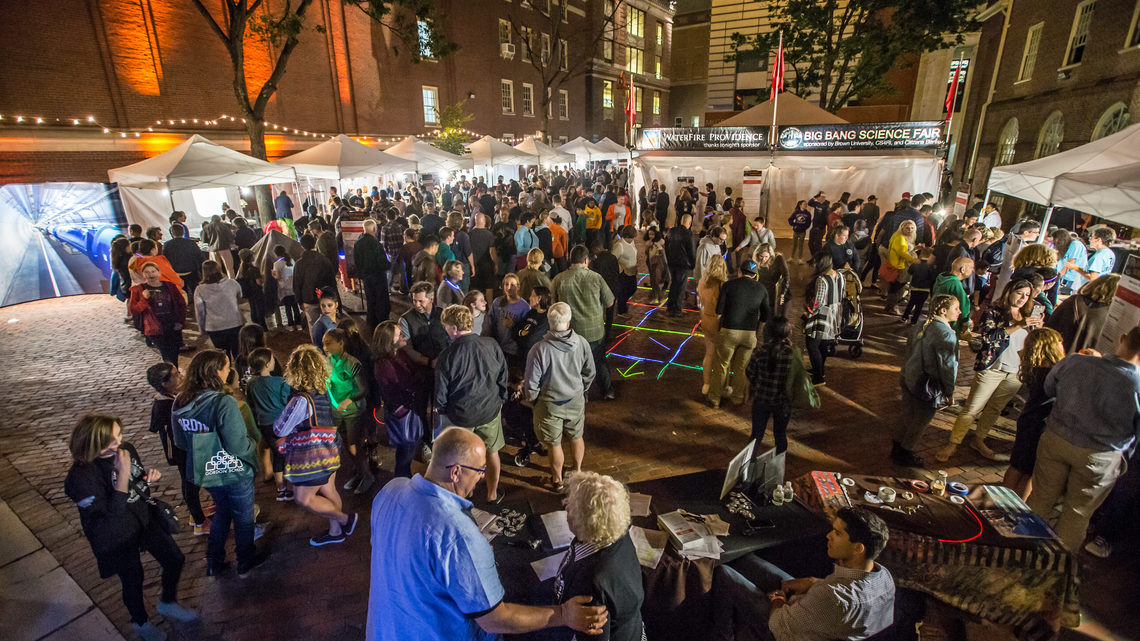 Participants navigate a glowstick maze led by Wheeler Middle School student Anand Heintz and friends while others build cloud chambers in a large tent in back.

There were six presentations in the Rhode Island School of Design’s riverside auditorium. These included 30-minute lectures on topics such as neuroscience and physics, and science-themed talks from a variety of artists. The night ended with a jazz performance by “God Particle,” a band led by Brown University cosmologist Stephon Alexander and Grammy-nominated musician Melvin Gibbs.

Next door, more than 100 volunteers helped run hands-on activities and workshops. These included sessions where participants could conduct miniature science experiments, such as building their own cloud chambers or recording electrical activity from neurons in cricket legs. There were also interactive “science of cooking” demos, jointly presented by a physicist and professional chef, as well as lessons on how to play the theremin, an electronic instrument that’s played in the air with antennas sensing the positions of the musician’s hands. A group of astronomers set up small telescopes on the sidewalk for people passing by to peer through while listening to volunteers talk about how the universe works.

According to Narain, one challenging aspect of organizing the event was making sure that all the activities were engaging for a general audience. “Everything had to have a ‘wow factor,’ Narain says. “It had to be visually impactful or else people might just walk by.”

One of the neuroscience exhibits, for example, was a colorful 3D neural network built collectively by attendees. Scientists explained how neurons work and how they are structured, then visitors received pipe-cleaners to build their own model of a brain cell. “By the end, this neural network took up a big section of the tent,” says Carlos Aizenman, one of the fair’s organizers and a professor of neuroscience at Brown University. “This was a way of showing that science can be a source of inspiration and provide different ways of visualizing the world.”

“They’ve done a tremendous job,” Evans says. “It’s a great thing to get the science out of the labs and into where the lay public is.”

The next Big Bang Science Fair will take place on the evening of Saturday, September 28. This year, the team has added several new items to the program, including interactive demos on medical topics from a group of physicians, an exhibit of math-inspired art, and a presentation from Derek Muller, a popular YouTuber who runs the science channel Veritasium.

“My vision is to make people appreciate science in the same way they appreciate art and music,” Narain says. “If we can make people feel that science is a fun thing to do, learn and converse about, I think that could be a way to change our society.”