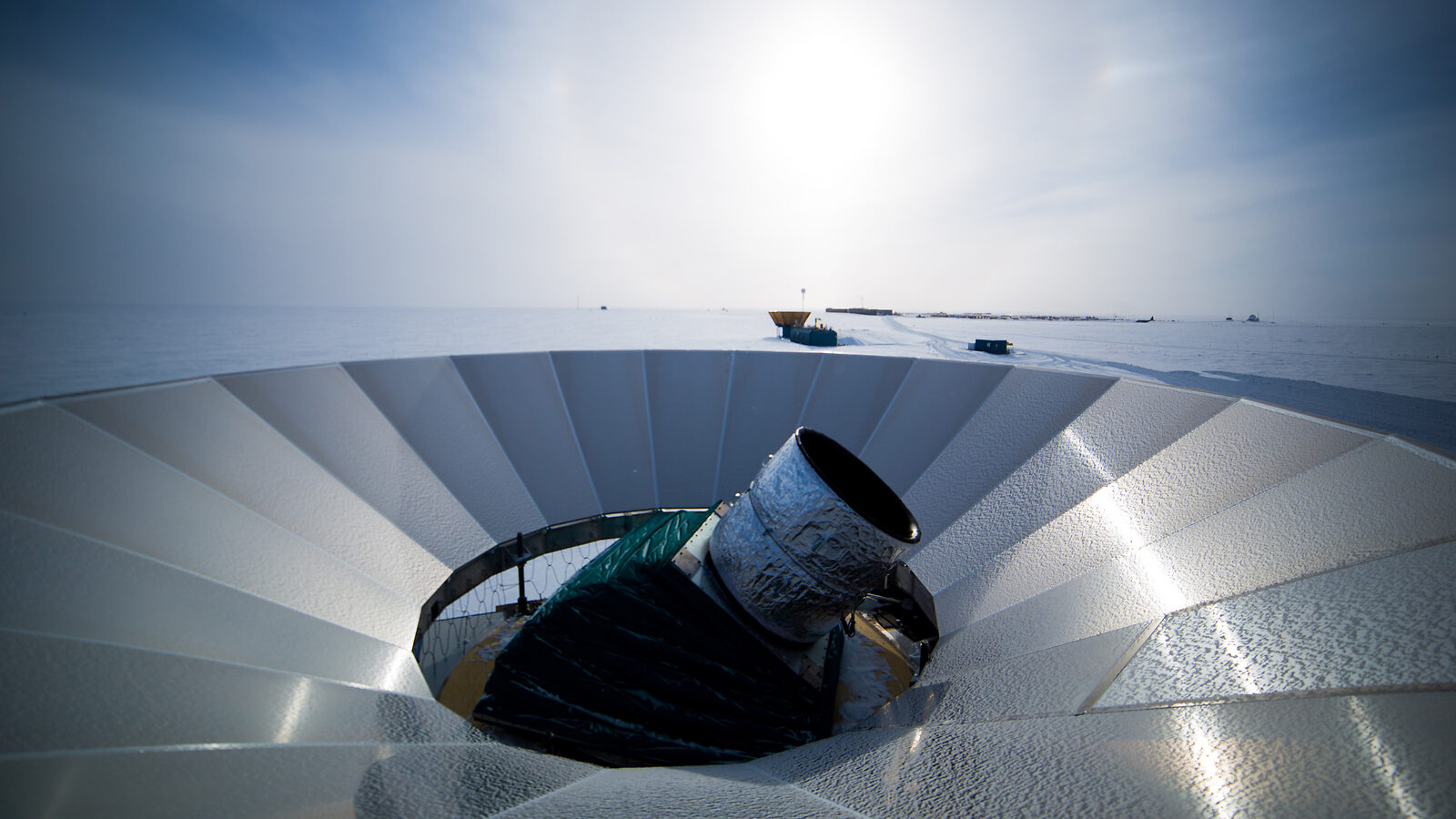 Physicists looking for signs of primordial gravitational waves by sifting through the earliest light in the cosmos—the cosmic microwave background—have reported their findings: still nothing.

But far from being a dud, the latest results from the BICEP3 experiment at the South Pole have tightened the bounds on models of cosmic inflation, a process that in theory explains several perplexing features of our universe and which should have produced gravitational waves shortly after the universe began.

“Once-promising models of inflation are now ruled out,” says Chao-Lin Kuo, a BICEP3 principal investigator and a physicist at Stanford University and the Department of Energy’s SLAC National Accelerator Laboratory.

The results were published Oct. 4 in Physical Review Letters.

Blowing up the universe

Cosmic inflation is the idea that very early in the history of the universe, the amount of space in the universe exploded from roughly the size of a hydrogen atom to about a light-year across, in about the time it would take light to travel one-trillionth of the way across the same atom.

Inflation can explain a lot—notably, why the universe appears to be fairly smooth and look the same in all directions, why space is flat and why there are no magnetic monopoles. Still, physicists have not succeeded in working out the exact details, and they have come up with many different ways inflation might have occurred.

One way to sort out which, if any, of these inflationary models is correct is to look for gravitational waves that would have been produced as space expanded and the matter and energy in it shifted. In particular, those waves should leave an imprint on the polarization of light in the cosmic microwave background.

This polarized light has two components: B-modes, which swirl around the sky, and E-modes, which are arranged in more orderly lines. Although the details depend on which model of inflation is correct, primordial gravitational waves should show up as particular patterns of B and E modes.

Starting in the mid-2000s, researchers began studying B-mode polarization in the CMB, searching for evidence of primordial gravitational waves. Over time, the particulars of the experiments have changed considerably, says SLAC lead scientist Zeeshan Ahmed, who has worked on a few incarnations of the BICEP experiment at the South Pole.

The first BICEP experiment deployed about 50 machined metal horns that detect tiny differences in microwave radiation, each equipped with thermal sensors and polarizing grids to measure polarization. The next generation, BICEP2, required a technological leap—new, superconducting detectors that could be more densely packed into the same area as previous telescopes. The successor Keck Array was essentially several BICEP2 telescopes in one.

To get to the next level, BICEP3, “we had to invent some things along the way,” Ahmed says.

The BICEP project is supported by grants from the National Science Foundation, the Keck Foundation, NASA’s Jet Propulsion Laboratory, NASA, the Gordon and Betty Moore Foundation, the Canada Foundation for Innovation, the UK Science and Technology Facilities Council and the US Department of Energy Office of Science.

With support from a SLAC Laboratory Directed Research and Development grant, Kuo, Ahmed and other SLAC scientists developed a number of new systems and materials. Among those are detector components that are more modular and easier to replace and lenses and filters that are more transparent to microwaves while blocking more infrared light, which helps keep the temperature-sensitive superconducting microwave detectors cool.

The results rule out a number of inflation models, including some popular older models and some versions of newer ones motivated by string theory, says Silverstein. The findings suggest that the correct model will be slightly more complicated that those that have been ruled out, although there is still a wide range of viable alternatives. “It’s not as though we’re going back to the drawing board,” Silverstein says, but the results “help us focus.”

As more data comes in from BICEP3 and its immediate successor, the BICEP Array, as well as from other projects, physicists will start to get clues that will help focus their search for better models of inflation even more. Still, Ahmed says, they may have to wait until CMB-S4, a project currently under review at the Department of Energy, to get clearer answers. CMB-S4 will deploy the equivalent of 18 BICEP3 experiments—or more, Ahmed says—and will draw heavily on Department of Energy laboratory researchers and expertise, including ideas developed for BICEP3. “It’ll take a decade to build up this thing,” he says, “but it’s starting to take shape.”

Editor’s note: A version of this article was originally published by SLAC.