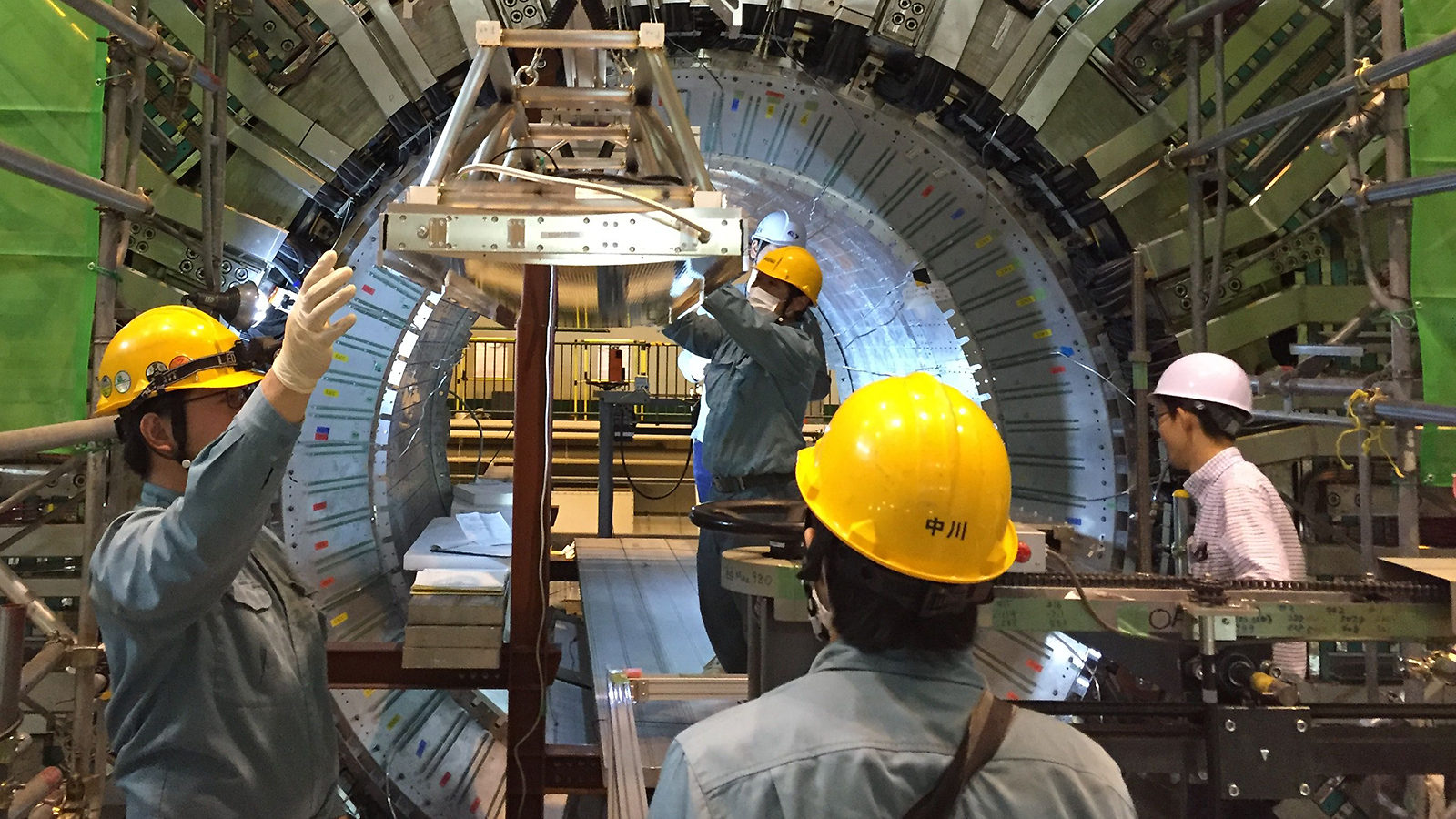 In the first split-second after the big bang, the universe made a smidgen more matter than antimatter. Instead of matter and antimatter annihilating one another and leaving an empty, cold universe, we ended up with a surplus of stuff. Now scientists need the most sensitive detectors and mountains of experimental data to understand where that imbalance comes from.

Belle II is one of those detectors that will look for differences between matter and antimatter to explain why we’re here at all. Currently under construction, the 7.5-meter-long detector will be installed in the newly recommissioned SuperKEKB particle accelerator located in Tsukuba, Japan. SuperKEKB runs beams of electrons and positrons (the antimatter version of electrons) into each other at close to the speed of light, and Belle II—once it is fully operational in 2018—will analyze the detritus of the collisions.

“All the experimental results to this point have been consistent with the so-called Standard Model of particle physics,” says Tom Browder, a physicist at the University of Hawaii and one of the spokespeople for the project. But while the Standard Model allows for some asymmetry, it doesn’t explain the matter-antimatter imbalance that exists. We need something more.

Belle II will look for the signatures of new physics in the rare decays of bottom quarks, charm quarks and tau leptons. (Bottom quarks are also known as beauty quarks, which is the “B” in SuperKEKB; the name “Belle” itself refers to “beauty”). Bottom and charm quarks are massive compared with the up and down quarks that make up ordinary matter, while tau leptons are the much heavier cousins of electrons. All three particles are unstable, decaying into a variety of lower-mass particles. If Belle II researchers spot a difference in the decays of these particles and their antimatter counterparts, it could explain why we ended up in a cosmos full of matter.

Finding the beauty is a beast

When electrons and positrons collide at low energy, they annihilate and convert all of their mass into gamma rays. At very high speed, however, the extra energy produces pairs of matter and antimatter particles, all of which are more massive than the original electrons. SuperKEKB smashes electrons and positrons together with the right energy to make B-mesons, particles made of a bottom quark and an antimatter quark of another type, along with anti-B-mesons, made of a bottom anti-quark and a matter quark.

These mesons change into other particles in complex ways as the bottom quarks and antiquarks decay. Belle II’s detectors will try to find decays that either aren’t allowed by the Standard Model or happen more or less often than expected. Any such deviations could be signs of new physics. The detector can also help physicists better understand particles made of four or five quarks (tetraquarks and pentaquarks) or stuck-together “molecules” of quarks.

“The cleaner environment at Belle II might make it easier to study some of those states, and to try to understand what the internal quark structure is,” says James Fast of the Department of Energy’s Pacific Northwest National Laboratory, lead lab for the US contributions to the Belle II detector upgrade.

SuperKEKB collides electrons and positrons, which aren’t made of anything smaller. This results in a clean collision. And because the energy going into each collision at SuperKEKB is well known, Belle II can study decays with invisible particles such as neutrinos by looking for the missing energy they carry away.

“The cleanliness of data at SuperKEKB enables the majority of B[-meson] events to be recorded,” says Kay Kinoshita of the University of Cincinnati, who works on the software Belle II will use to analyze collisions.

But Belle II isn’t the only detector searching for these rare bottom quark decays. An experiment at the LHC, LHCb, is also on the hunt.

The LHC produces a wider variety of particles containing bottom quarks. That includes a type that decays into two muons, “which is a 'golden' mode for effects from supersymmetry and theories with multiple Higgs bosons,” says Harry Cliff, a physicist at the University of Cambridge who works on LHCb.

Race to the bottom

Belle II is the aptly named successor to the Belle experiment and is designed to handle as much as 50 times the number of collisions in the previous design. It’s a monumental effort involving hundreds of physicists and engineers from 23 nations in Asia, Europe and North America.

“The amount of data that Belle II will collect can be comparable to data management challenges that are faced by the big LHC experiments [like CMS and ATLAS],” says Fast. Universities don’t have the resources to operate the computers needed to manage all the data coming from Belle II, so a national lab like PNNL is an ideal host. Similar data centers for Belle II will operate in Japan and Europe.

At present, the SuperKEKB accelerator is successfully storing both electrons and positrons to prepare for the tests that will lead to new experiments. The Belle II assembly will be in place next year, followed by a commissioning process to make sure everything is working properly. In 2018, the full experiment will be operational and producing data to find exotic B-meson behavior.

It may feel ironic to take years to recreate what the universe did in a split second, but such is the nature of particle physics. The process of smashing electrons and positrons together isn’t identical to the process that created the early cosmos either, but if there’s any new physics hiding in the decays of bottom quarks, this is the type of experiment that could find it. Which is, after all, the beauty of science.