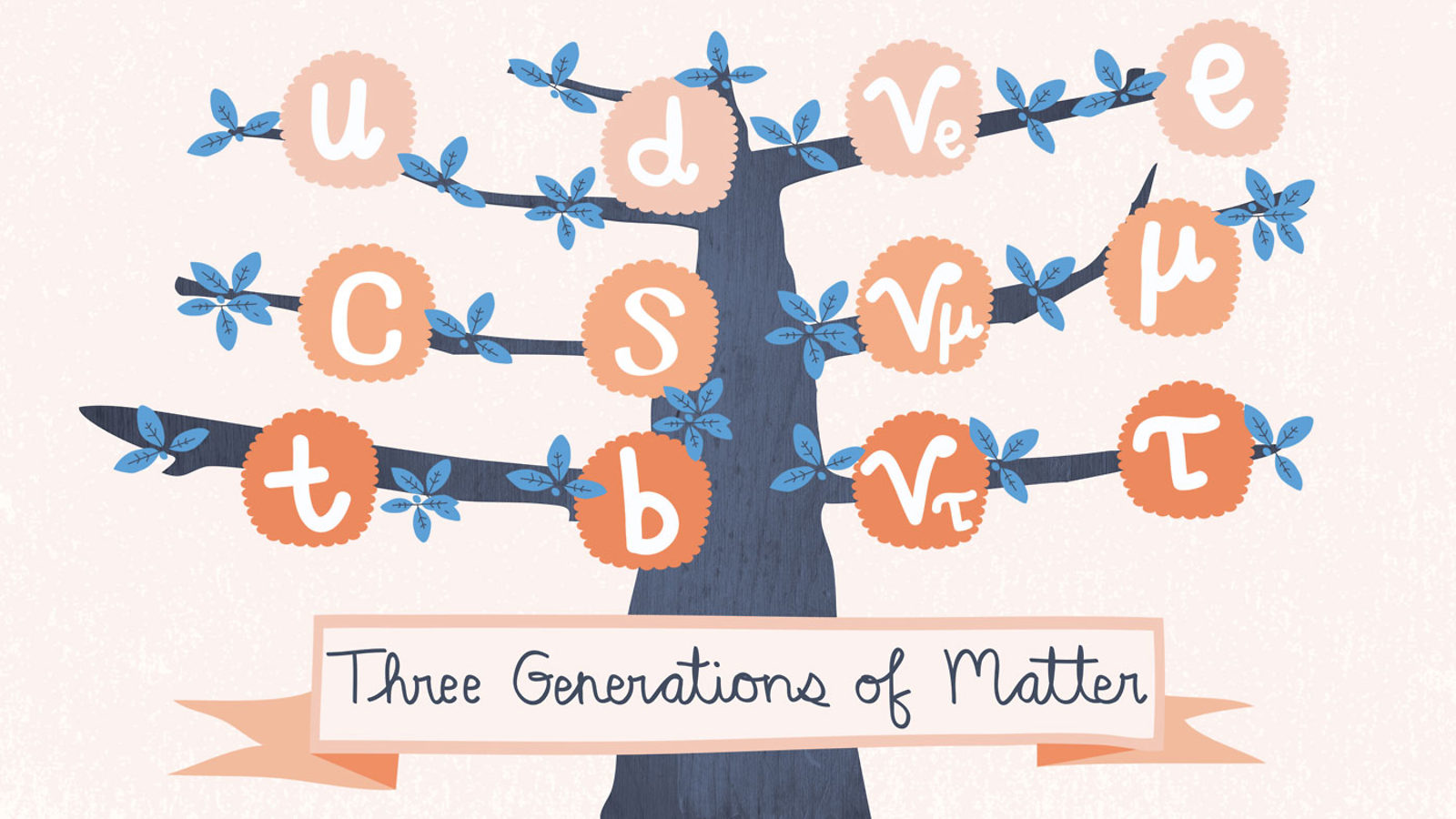 The Standard Model of particles and interactions is remarkably successful for a theory everyone knows is missing big pieces. It accounts for the everyday stuff we know like protons, neutrons, electrons and photons, and even exotic stuff like Higgs bosons and top quarks. But it isn’t complete; it doesn’t explain phenomena such as dark matter and dark energy.

The Standard Model is successful because it is a useful guide to the particles of matter we see. One convenient pattern that has proven valuable is generations. Each particle of matter seems to come in three different versions, differentiated only by mass.

Scientists wonder whether that pattern has a deeper explanation or if it’s just convenient for now, to be superseded by a deeper truth.

The Standard Model is a menu listing all of the known fundamental particles: particles that cannot be broken down into constituent parts. It distinguishes between the fermions, which are particles of matter, and the bosons, which carry forces.

The matter particles include six quarks and six leptons. The six quarks are called the up, down, charm, strange, top and bottom quark. Quarks typically don’t exist as single particles but lump together to form heavier particles such as protons and neutrons. Leptons include electrons and their cousins the muons and tau particles, along with the three types of neutrinos.

All of these matter particles fall into three “generations.”

“The three generations are literally copy-paste of the first generation,” says Carleton University physicist Heather Logan. The up, charm and top quarks have the same electric charge, along with the same weak and strong interactions—they primarily differ in the mass, which comes from the Higgs field. The same thing holds for the down, strange and bottom quarks, along with the electron, muon and tau leptons.

“The fact that the three generations couple differently to the Higgs sector is maybe telling us something, but we don't really know what yet,” Logan says. Most of the generations differ in mass by a lot. For example, the tau lepton is roughly 3600 times more massive than the electron, and the top quark is nearly 100,000 times heavier than the up quark. That difference manifests itself in stability: The heavier generations decay into the lighter generations, until they reach the lightest, which are (as far as we can tell) stable forever.

The generations play a big role in experiments. The Higgs boson, for instance, is an unstable particle that decays into a variety of other particles, including tau leptons. “Since the tau is the heaviest, the Higgs [boson] prefers to change into taus more than electrons or muons,” says Clara Nellist, an experimental particle physicist at the Laboratoire de l'Accélérateur Linéaire in Orsay, France, who works on the ATLAS experiment. “The best way to study how the Higgs interacts with leptons is by looking at a Higgs changing into two taus.”

That sort of observation is the heart of Standard Model physics: Crash two or more particles together, watch what new particles are born, look for patterns in the detritus, and—if we’re really lucky—see what doesn’t fit into the map we have.

While some stuff like dark matter obviously lies outside the charts, the Standard Model itself has a few problems. For example, neutrinos should be massless according to the Standard Model, but real-world experiments show they have very tiny masses. And unlike quarks and electrically charged leptons, the mass differences between the generations of neutrinos are very small, which is why we see them oscillating from one type to another.

Without mass, neutrinos are exactly identical; with the mass, they’re different. And that generational difference is puzzling to theorist Richard Ruiz of the University of Pittsburgh. “There is a pattern here staring at us but we cannot quite figure out how to make sense of it.”

Even if there is only the one Standard Model Higgs, we can learn a lot by how it interacts and decays. For instance, Nellist says, “by studying how often the Higgs boson changes into taus compared to other particles, we can test the validity of the Standard Model and see if there are hints of other generations.”

It’s unlikely, since any fourth generation quark would need to be far more massive even than the top quark. But any anomaly in Higgs decay could tell us a lot.

“Nobody knows why there are three generations,” Logan says. However, the structure of the Standard Model is a clue to what might be beyond, including the theory known as Supersymmetry: “If there are supersymmetric partners of the fermions, they should also fall into the three generations. How their masses are set might give us clues to understanding how the masses of the Standard Model fermions are set and why we have those patterns.”

No matter how many there are, nobody knows why there are generations to begin with. “‘Generations’ is just a conventional organization of the Standard Model’s matter content,” Ruiz says. That organization might survive in a deeper theory (for instance, theories in which quarks are made up of smaller particles called “preons”, which are unlikely based on present data), but new ideas would have to explain why the quarks and leptons seem to fall into the patterns they do.

Ultimately, even though the Standard Model is not the final description of the cosmos, it’s been a good guide so far. As we look for the edges of the map it provides, we get closer to a true and accurate chart of all the particles and their interactions.