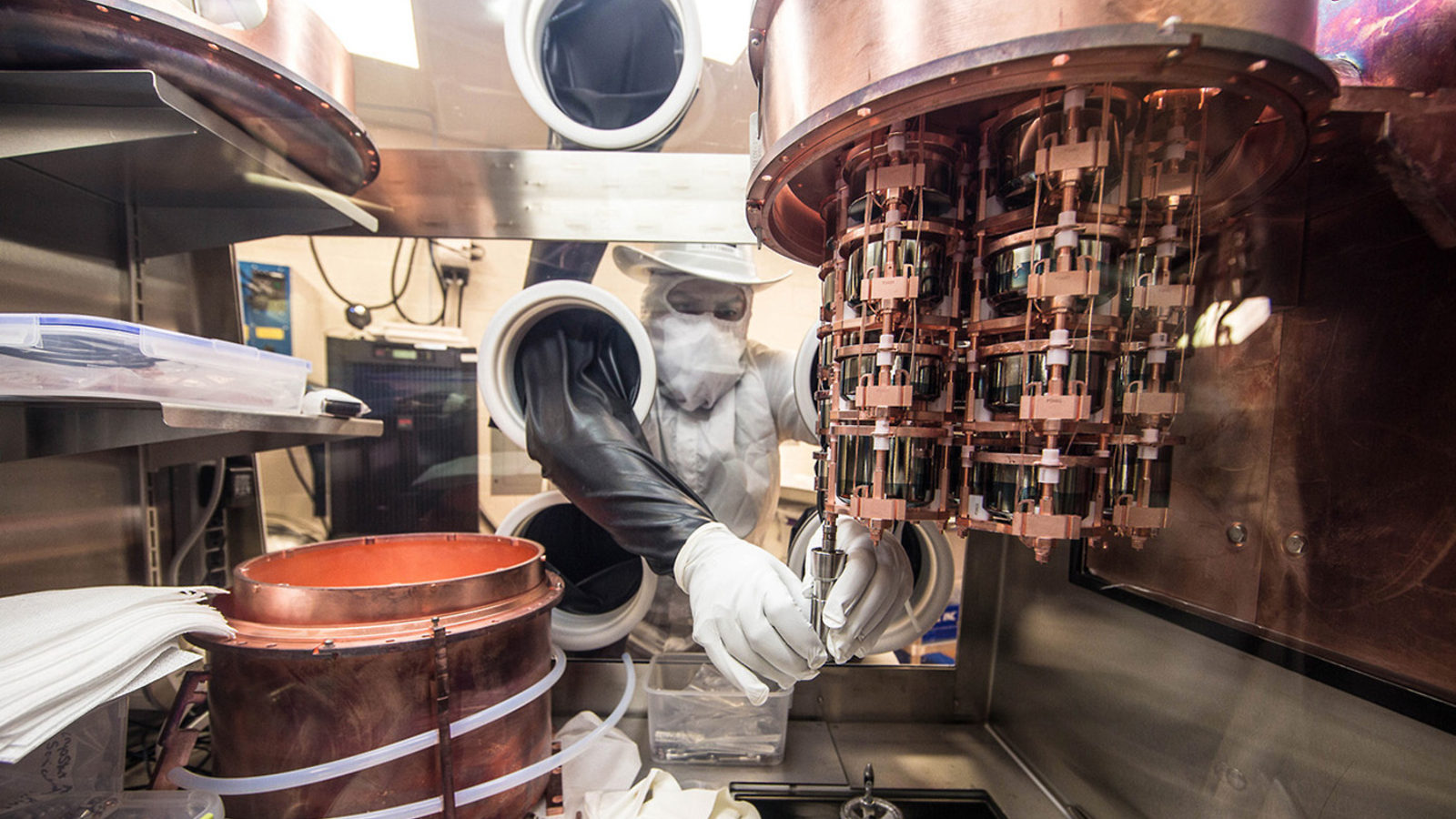 Testing the nature of neutrinos

The Majorana Demonstrator experiment is looking for a sign that neutrinos are their own antiparticles.

A mile below the Earth’s surface, a large copper cylinder sits behind a thick shield of lead bricks stacked into what could be confused for a wood-burning pizza oven. Inside, 29 hockey pucks of germanium sit in strings and send information out through a gleaming copper arm.

This is the Majorana Demonstrator, an experiment housed in a former gold mine at Sanford Lab in Lead, South Dakota. It’s searching for a rare process that would help scientists explain why matter exists in our universe instead of nothing at all.

“To me, it’s our version of going to the moon right now,” says Julieta Gruszko, a PhD student from the University of Washington working on the experiment. “We’re not going to the moon. Instead we’re doing these experiments that tell us why the universe is the way it is. It really is the way in which we do discovery these days.”

It’s an exciting time for Majorana. The first of two copper cylinders, a cryostat cooled to minus 320 degrees Fahrenheit, was installed in June and is already gathering basic data. Researchers plan to install the second module by the end of the year, after the specially made copper is machined into parts and assembled. This second module will join the first behind the shield, sliding in on an air-bearing table (read: hoverboard) like a key fits into a lock.

Once completed, the experiment is expected to take data for three to four years. But you can also think of the entire Majorana Demonstrator as a prototype for something bigger. The experiment’s purpose in life is to prove that researchers can sufficiently reduce backgrounds, the noise that mimics the signals they seek, to find what they’re looking for.

What they’re looking for is neutrinoless double beta decay, a type of reaction that would tell us if neutrinos, fundamental particles that rarely interact with anything, could be responsible for our matter-dominated cosmos.

It’s unlikely that the Majorana Demonstrator would see this process directly, says Steve Elliott, the project’s spokesperson and a researcher at Los Alamos National Laboratory. “But of course, you’d always love to see it,” he says.

More likely, Majorana will act as a stepping-stone on the way to a one-ton version of the experiment, which would have sufficient mass and resolution to see the process. Since neutrinoless double beta decay is expected to happen in a single germanium atom less than once every 1025 years (far, far longer than the lifespan of the universe), more mass is vital. It means more chances to glimpse the phenomenon—if it exists.

For neutrinoless double beta decay to occur, the electrically neutral neutrino must be its own antiparticle, earning it a distinction as something called a Majorana particle. As a germanium atom decayed, two neutrinos would annihilate. The emitted electrons would carry away all of the energy that scientists could see as a spike in the data. This type of experiment, taking place with different types of atoms around the world, is the only kind currently able to determine whether neutrinos are Majorana particles. If they are, they could have caused an asymmetry early in the universe’s history that led to the world we see today, allowing matter to win out over antimatter. 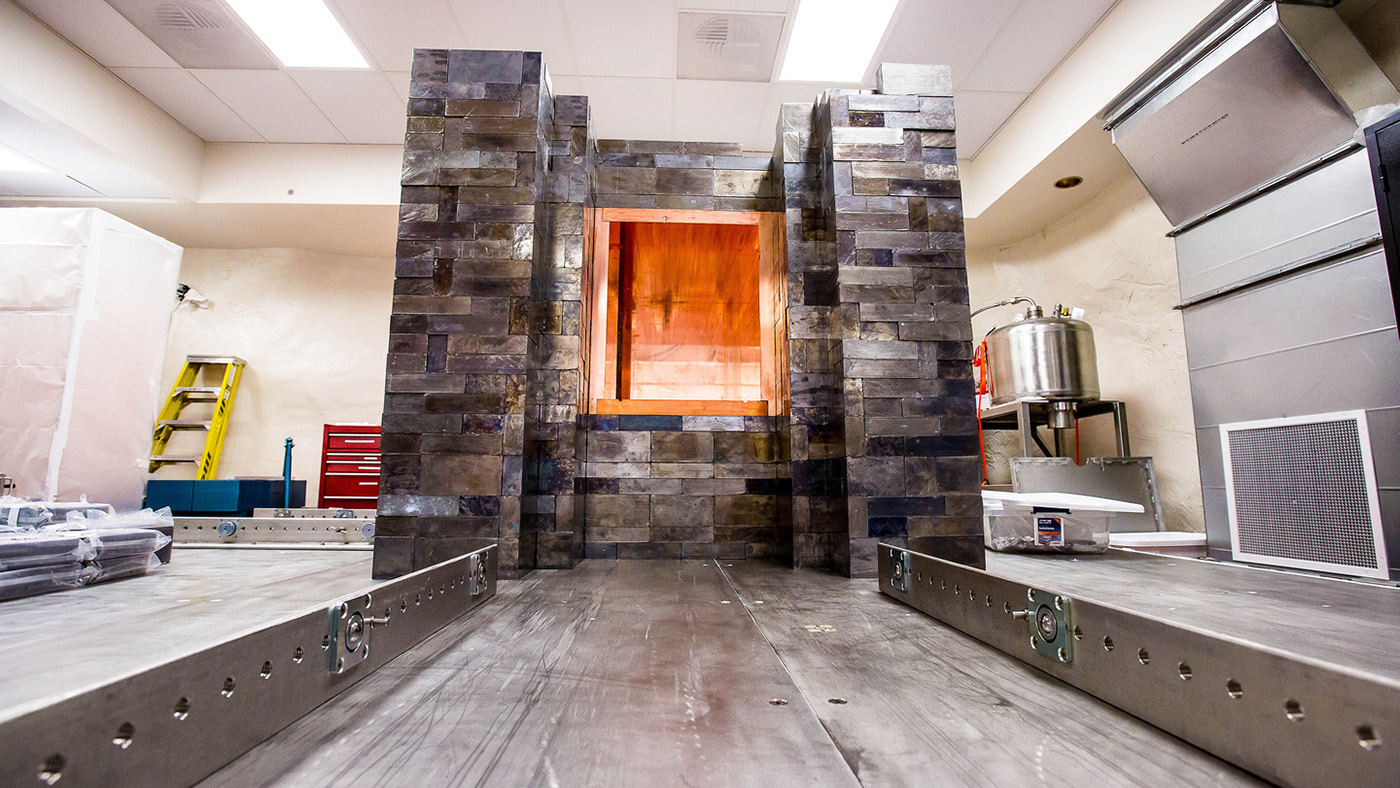 Bringing the background to the foreground

To reduce background noise, you have to reduce radiation. Majorana does this in several ways. All of the copper is grown underground in a process called electroforming, which makes about a hair’s width of copper per day. The mile of rock shielding protects the experiment and copper from cosmic rays, making it the purest copper in existence. But while all the rock of the Black Hills cocoons the experiment quite well, it can’t block out everything—and the rock itself contains uranium and thorium that also produce radiation that the lead shield must counter.

The shield, two meters long on each side, is surrounded by more insulation—a nitrogen gas layer to flush out radon, polyethylene to shield against neutrons, a layer of plastic to pick up stray muons. Inside, a copper lining provides extra protection from gamma rays.

Anything that goes within this shield goes through a special cleaning process, and much is specially made. For example, off-the-shelf electrical connectors use springs made from material too radioactive for the project. That means the team had to design springless connectors.

“All these tiny details you would imagine you can brush off become really key, and the whole success of the experiment can hinge on something as stupid as making a plug that works,” Gruszko says. “For us, even fractions of grams of tiny springs inside tiny connectors can be enough to blow our whole background budget.”

The design and construction of such a low-background experiment has been more than 10 years in the making, and groups are already thinking about the larger versions yet to come. Massive physics projects have long timescales and are only getting longer as they grow. Gruszko predicts that within the next decade, there will be a collaboration working on a ton-scale version of the experiment.

Fortunately, Majorana scientists are not working in a vacuum. Other experiments around the world are seeking more information about neutrinos through this search for neutrinoless double beta decay, whether they are using germanium (as in GERDA) or tellurium (CUORE) or xenon (KamLAND-Zen, EXO or XMASS). They all face the challenge of reducing background noise in search for their ultimate signal.

“It’s not just about seeing something,” Gruszko says. “It’s about convincing the community that what you’re seeing is actually the signal that you’re claiming.”