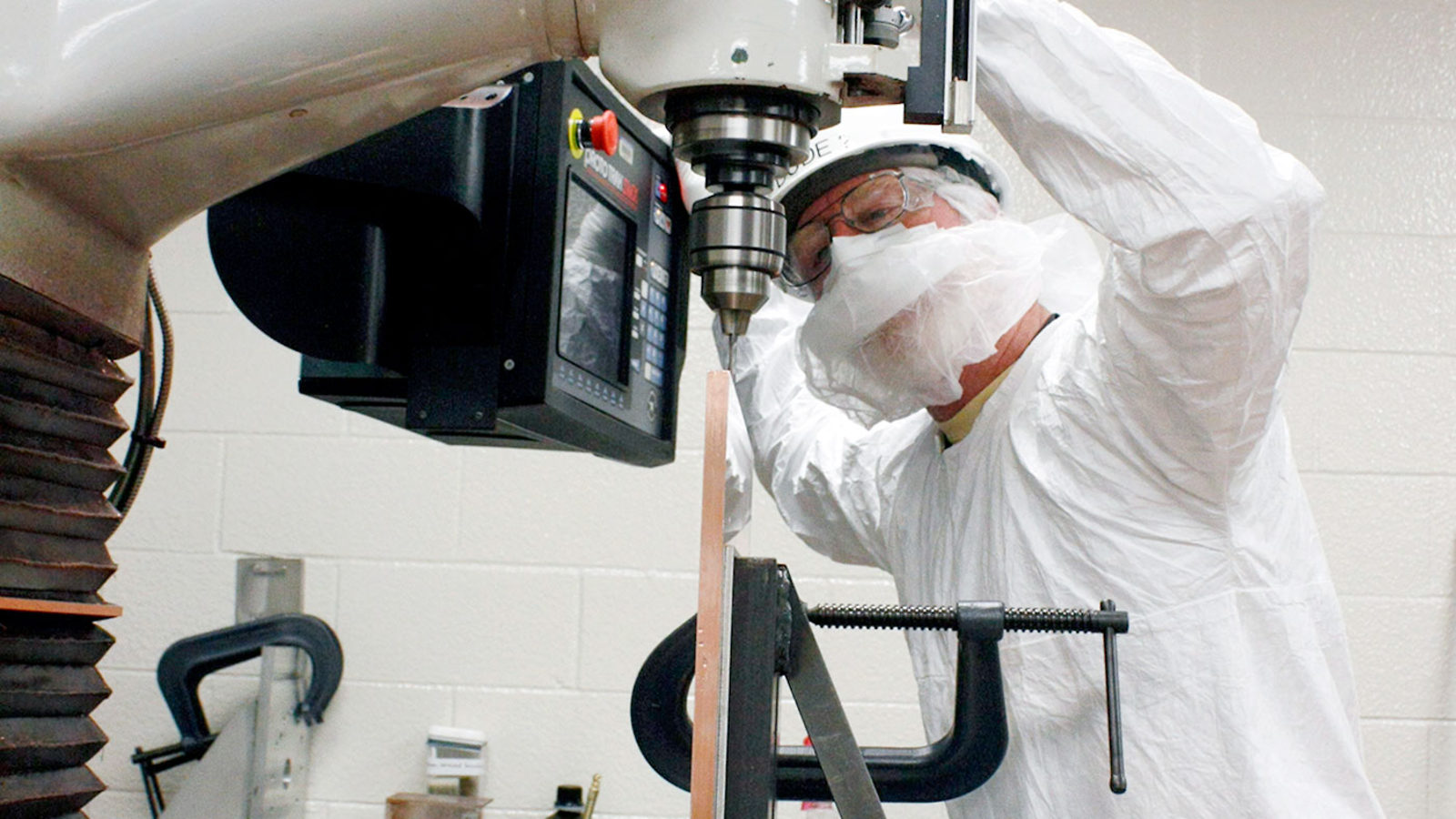 What’s it like being the machinist at the deepest machine shop in the world?

The Majorana Demonstrator searches for a rare decay process a mile below the surface at Sanford Lab in Lead, South Dakota. To craft the experiment’s precise copper parts away from cosmic rays, the lab evolved a unique feature: the deepest machine shop in the world, complete with lathe, CNC mill, wire EDM (electrical discharge machine), 70-ton press and a laser engraver to track the parts.

It is here that Randy Hughes comes to work every day and has for the last three years. He dons two pairs of booties, full white coveralls, glasses, two pairs of gloves and a facemask before he starts machining the majority of the pieces in the experiment, from thick shield plates to microscopic pins.

Hughes, a motorcycle enthusiast and baseball fan from Detroit, brings 40 years of experience as a machinist and toolmaker to the job. He just happened to be working at Adams ISC in Rapid City when the experiment came around looking for a temporary cleanroom. The rest is history.

Had you worked on anything of this scale before?

I don’t think anybody has done anything on this scale. I’ve had experiences that were more detailed and demanding as far as the product, but nothing in such an environment as this one.

How do you feel about working a mile underground?

At first I was wondering if I was capable. They were preparing me to come down, and I’m wondering if I can handle it, which turned out to be a silly question. It’s like working anywhere else, but without a view. I can’t step outside and look out the window. And I can’t go out for lunch.

Presently, I’m finished with the string parts and working mostly on the larger parts, such as the shield. Two years ago, I was working mainly on string parts, which were all the smaller parts. As far as the inventory of what they need, I am winding down to the end of it. The shield parts could wait until the end. They didn’t want the surface to be machined and then sit around.

Is there anything that has surprised you about working down here?

The lack of vitamin D. I feel like a mole. On days where I travel to get here, I never see the sun until the weekend. Hopefully it’s sunny out. I travel almost an hour to get here one way. I come through the Black Hills here every day. I like to tell people I have the most beautiful one-hour commute in the country. It’s along a creek and through canyons, and I see elk and eagles and deer.

What have been your favorite and least favorite things to work on?

The least favorite thing was the hollow hex rods. Trying to thread them because they are so long, and then cutting the threads with no support and no coolant, has made for a real balancing act as far as not breaking the parts off in the machine. The hex rod is the main building block of the string. There are three of them where each detector is, and it stacks the build together.

Favorite parts, believe it or not, were little things, like the Vespel pins. It’s my favorite because of the sense of pride and the look I get from people when they see how small it is. The parts are no bigger than the ball of a ball-point pen. Vespel pins plug into voltage connectors to hold the wire in place, so it doesn’t get pulled and tugged on other than at that particular point.

What is unique about working on this job?

Copper is not something that, as a machinist, you have to spend a lot of time making parts out of. The entire project, from my point of view, has been copper. And copper would be your last choice to make anything out of, for more than one reason. One, you wouldn’t think it would be durable enough, and two, it’s really soft, pliable and gummy, and it creates manufacturing problems.

What adaptations have you made?

I’ve had to come up with procedures to accommodate the lack of equipment, tooling, coolant and processability. The way I set the tooling against the part, what kind of feeds and speeds I use to cut and the angle of the tools—it’s a lot of trial and error. I’ve developed a few little tricks that have paid off for me.

Do you ever practice on normal copper?

There is some commercial copper down here for a few things, such as the prototype. What I was working on at the beginning was that copper. It machines almost exactly the same, but for the most part, I might be overconfident in my ability and I go at it. As a machinist, I have a machinist attitude: I can do anything. I can make anything.

What is the back-and-forth communication between the machine shop and the cleanroom?

I try to build in my head as I’m doing something. If I see something in numbers that doesn’t make sense to me mechanically, all I have to do is pick up a phone or knock on the door, and I can ask them about it.

How do you feel about working in a cleanroom every day?

At first, it was unique. And it was kinda novel. But after three years, it’s monotonous and trying. The first thing I do when I get out of this room is take this facemask off. The hood was given up for visibility’s sake. You steam up a lot, and I have my fingers and hands around the machines. I need any kind of help with being able to see where my hands are. Forty years, I still have all my digits.

Did you know anything about neutrinos or physics or Sanford Lab before this?

Nooo. This was like a trip into outer space for me. It’s taken me all of these three years of small talk and side talk and listening to the scientists and physicists and students, and a few questions, and having them translate it into layman’s terms. I’ve learned quite a bit about it. And that’s another reward from this job. When I start talking about this project, everybody stops and listens, because it’s unique, and it’s different, and it’s interesting.

What are your plans after this?

I’m still employed with Adams, and they’re anticipating my return. They offered me my old position back as shop foreman and are starting to pick up business and would really like to have me back.

And you won’t have to wear this getup everyday.

That would be a pleasurable change. But I’ll also be getting dirty every day. The problem with wearing the gloves every day is I’ve lost all the calluses on my hands. And the few times I’ve gone back there and worked, I always seem to get a metal shaving sliver or little cut because my hands are soft. I have to get toughened up again.