The experiment will begin collecting data from a neutrino beam in October. 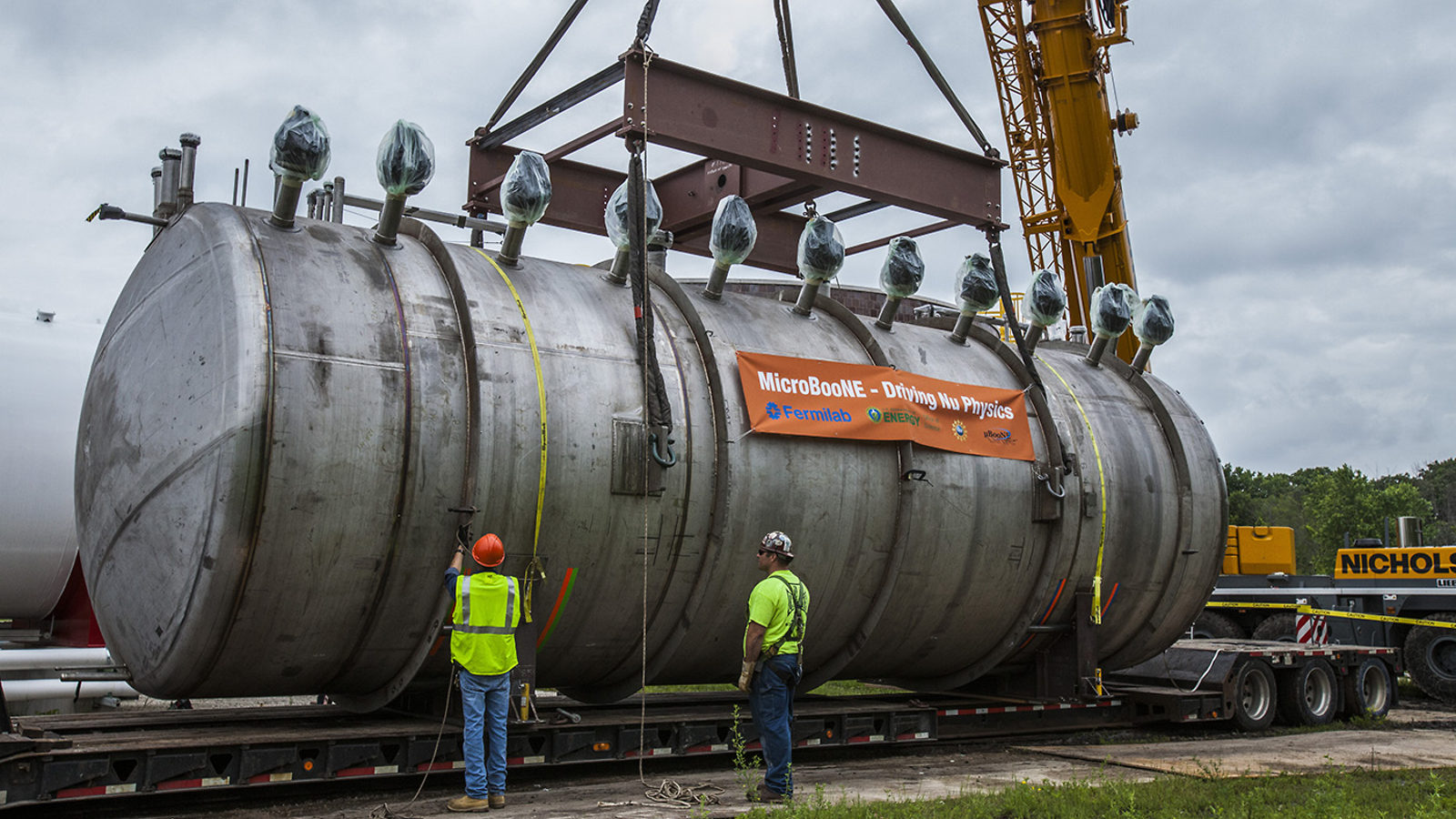 A school bus-sized detector packed with 170 tons of liquid argon has seen its first particle footprints.

On August 6, MicroBooNE, a liquid-argon time projection chamber, or LArTPC, recorded images of the tracks of cosmic muons, particles that shower down on Earth when cosmic rays collide with nuclei in our atmosphere.

"This is the first detector of this size and scale we've ever launched in the US for use in a neutrino beam, so it's a very important milestone for the future of neutrino physics," says Sam Zeller, co-spokesperson for the MicroBooNE collaboration.

Picking up cosmic muons is just one brief stop during MicroBooNE's expedition into particle physics. The centerpiece of the three detectors planned for Fermilab's Short-Baseline Neutrino program, or SBN, MicroBooNE will pursue the much more elusive neutrino, taking data about this weakly interacting particle for about three years.

When beam starts up in October, it will travel 470 meters and then traverse the liquid argon in MicroBooNE, where neutrino interactions will result in tracks that the detector can convert into precise three-dimensional images. Scientists will use these images to investigate anomalies seen in an earlier experiment called MiniBooNE, with the aim to determine whether the excess of low-energy events that MiniBooNE saw was due to a new source of background photons or if there could be additional types of neutrinos beyond the three established flavors. 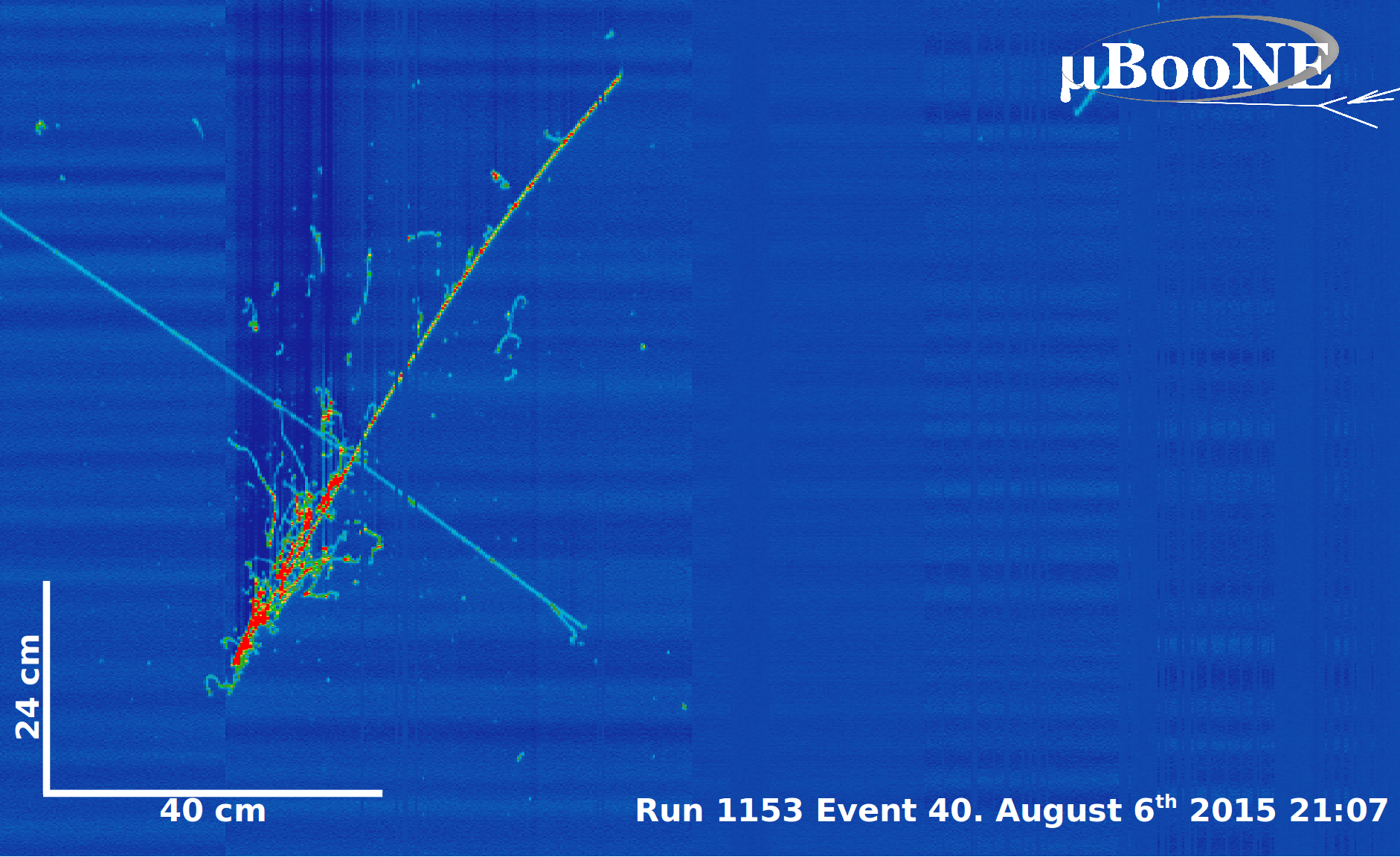 One of MicroBooNE's goals is to measure how often a neutrino that interacts with an argon atom will produce certain types of particles. A second goal is to conduct R&D for future large-scale LArTPCs.

MicroBooNE will carry signals up to 2.5 meters across the detector, the longest drift ever for a LArTPC in a neutrino beam. This requires a very high voltage and very pure liquid argon. It is also the first time a detector will operate with its electronics submerged in liquid argon on such a large scale. All of these characteristics will be important for future experiments such as the Deep Underground Neutrino Experiment, or DUNE, which plans to use similar technology to probe neutrinos.

"The entire particle physics community worldwide has identified neutrino physics as one of the key lines of research that could help us understand better how to go beyond what we know now," says Matt Toups, run coordinator and co-commissioner for MicroBooNE with Fermilab scientist Bruce Baller. "Those questions that are driving the field, we hope to answer with a very large LArTPC detector."

Another benefit of the experiment, Zeller said, is training the next generation of LArTPC experts for future programs and experiments. MicroBooNE is a collaborative effort of 25 institutions, with 55 students and postdocs working tirelessly to perfect the technology. Collaborators are keeping their eyes on the road toward the future of neutrino physics and liquid-argon technology.

"It's been a long haul," says Bonnie Fleming, MicroBooNE co-spokesperson. "Eight and a half years ago liquid argon was a total underdog. I used to joke that no one would sit next to me at the lunch table. And it's a world of difference now. The field has chosen liquid argon as its future technology, and all eyes are on us to see if our detector will work."