It would take 1500 high-definition television screens to display just one image from the Large Synoptic Survey Telescope's high-resolution camera. 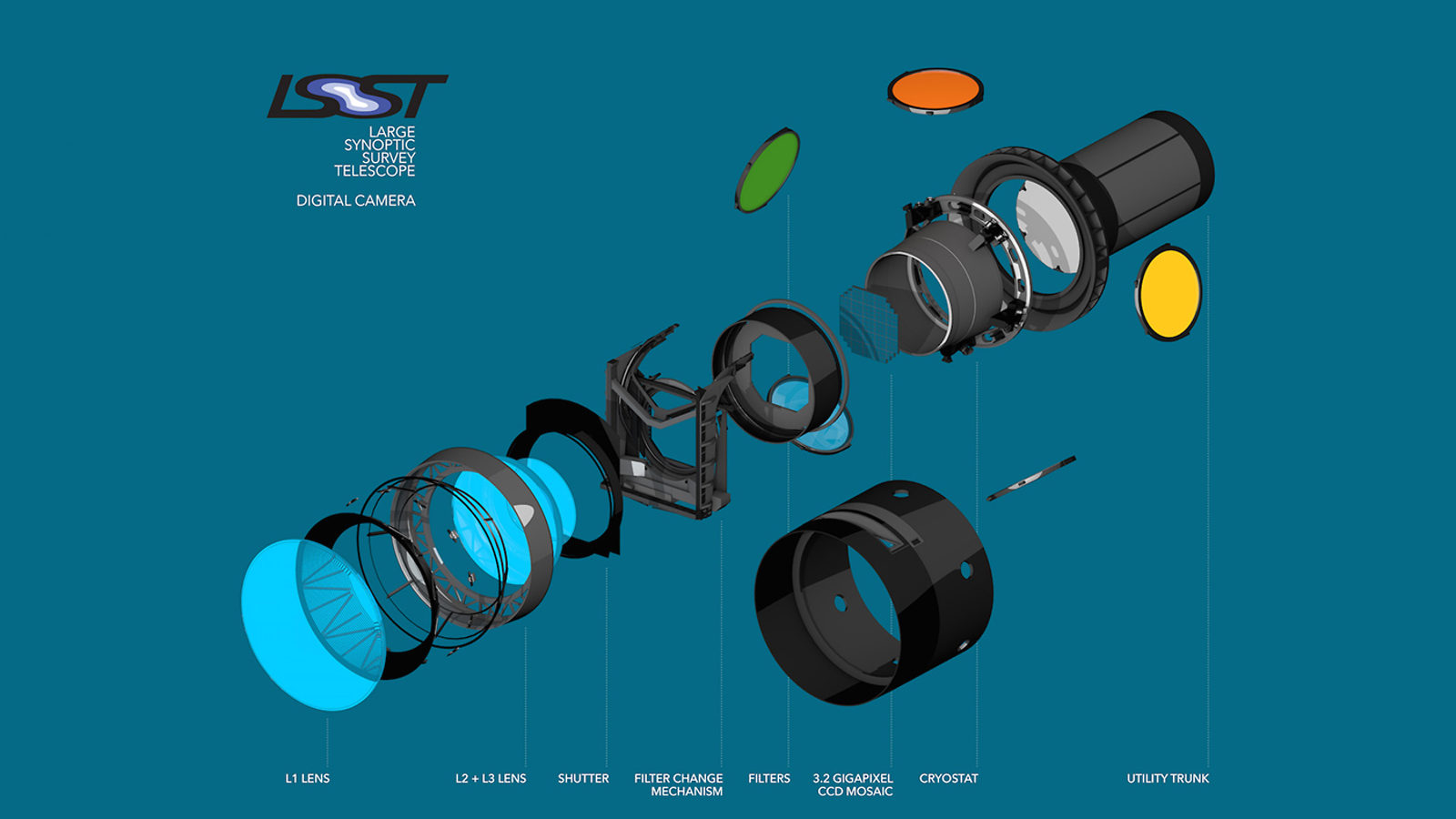 The US Department of Energy has approved the start of construction for a 3.2-gigapixel digital camera—the world’s largest—at the heart of the Large Synoptic Survey Telescope. Assembled at SLAC National Accelerator Laboratory, the camera will be the eye of LSST, revealing unprecedented details of the universe and helping unravel some of its greatest mysteries.

The construction milestone, known as Critical Decision 3, is the last major approval decision before the acceptance of the finished camera, says LSST Director Steven Kahn: “Now we can go ahead and procure components and start building it.”

Starting in 2022, LSST will take digital images of the entire visible southern sky every few nights from atop a mountain called Cerro Pachón in Chile. It will produce a wide, deep and fast survey of the night sky, cataloguing by far the largest number of stars and galaxies ever observed. During a 10-year time frame, LSST will detect tens of billions of objects—the first time a telescope will observe more galaxies than there are people on Earth—and will create movies of the sky with unprecedented detail. Funding for the camera comes from the DOE, while financial support for the telescope and site facilities, the data management system, and the education and public outreach infrastructure of LSST comes primarily from the National Science Foundation.

The telescope’s camera—the size of a small car and weighing more than three tons—will capture full-sky images at such high resolution that it would take 1500 high-definition television screens to display just one of them.

This has already been a busy year for the LSST Project. Its dual-surface primary/tertiary mirror—the first of its kind for a major telescope—was completed; a traditional stone-laying ceremony in northern Chile marked the beginning of on-site construction of the facility; and a nearly 2000-square-foot, 2-story-tall clean room was completed at SLAC to accommodate fabrication of the camera.

“We are very gratified to see everyone’s hard work appreciated and acknowledged by this DOE approval,” says SLAC Director Chi-Chang Kao. “SLAC is honored to be partnering with the National Science Foundation and other DOE labs on this groundbreaking endeavor. We’re also excited about the wide range of scientific opportunities offered by LSST, in particular increasing our understanding of dark energy.”

Components of the camera are being built by an international collaboration of universities and labs, including DOE’s Brookhaven National Laboratory, Lawrence Livermore National Laboratory and SLAC. SLAC is responsible for overall project management and systems engineering, camera body design and fabrication, data acquisition and camera control software, cryostat design and fabrication, and integration and testing of the entire camera. Building and testing the camera will take approximately five years.

The LSST’s camera will include a filter-changing mechanism and shutter. This animation shows that mechanism, which allows the camera to view different wavelengths; the camera is capable of viewing light from near-ultraviolet to near-infrared (0.3-1 μm) wavelengths.

SLAC is also designing and constructing the NSF-funded database for the telescope’s data management system. LSST will generate a vast public archive of data—approximately 6 million gigabytes per year, or the equivalent of shooting roughly 800,000 images with a regular 8-megapixel digital camera every night, albeit of much higher quality and scientific value. This data will help researchers study the formation of galaxies, track potentially hazardous asteroids, observe exploding stars and better understand dark matter and dark energy, which together make up 95 percent of the universe but whose natures remain unknown.

Nadine Kurita, camera project manager at SLAC, says fabrication of the state-of-the-art sensors for the camera has already begun, and contracts are being awarded for optical elements and other major components. “After several years of focusing on designs and prototypes, we are excited to start construction of key parts of the camera. The coming year will be crucial as we assemble and test the sensors for the focal plane.”

The National Research Council’s Astronomy and Astrophysics decadal survey, Astro2010, ranked the LSST as the top ground-based priority for the field for the current decade.  The recent report of the Particle Physics Project Prioritization Panel of the federal High Energy Physics Advisory Panel, setting forth the strategic plan for US particle physics, also recommended completion of the LSST.

“We’ve been working hard for years to get to this point,” Kurita says. “Everyone is very excited to start building the camera and take a big step toward conducting a deep survey of the Southern night sky.”

This article is based on a SLAC press release.