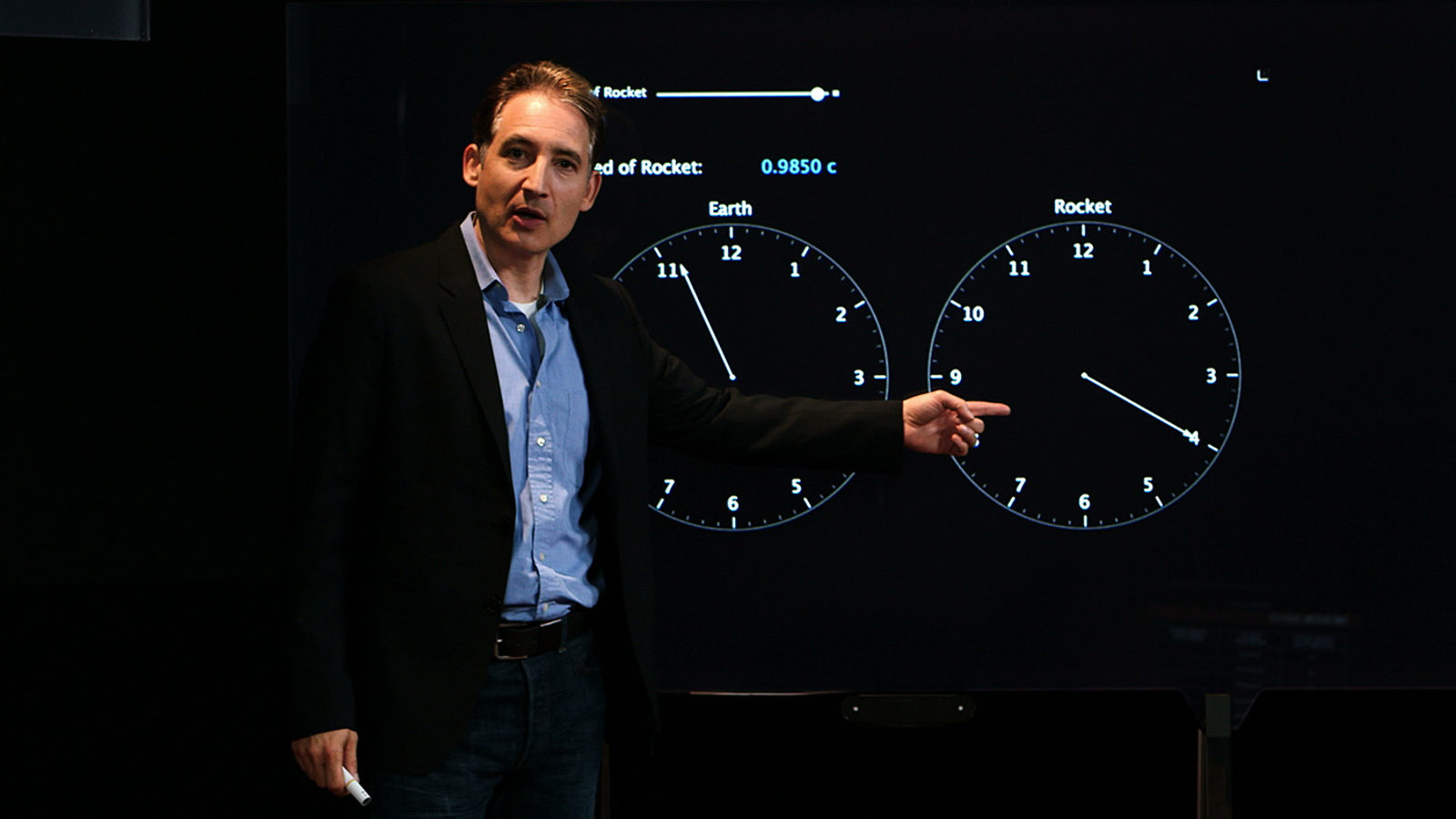 Brian Greene welcomes the Internet to physics class with World Science U.

Professor, author and string-theorist-about-town Brian Greene wants to expand the ways we learn about science. Greene, the author of popular physics books such as The Elegant Universe and the host of several science specials on PBS, recently led the creation of a free online learning hub called World Science U.

The site offers video courses on topics such as special relativity and quantum mechanics. It is a spin-off of the World Science Festival, an annual event run by a nonprofit organization Greene founded in New York.

Greene says he’s been thinking about digital education since the 1990s, when he moved from Cornell University to Columbia University but wanted to continue teaching his former students.

“I was doing video-conferenced courses way back then, when the technology really couldn’t support all that we needed,” Greene says. “And now there’s a huge opportunity to leverage the technical prowess we have to create a new type of educational experience.”

The challenge has been finding the resources to make the most use of the available tools, he says.

“It’s expensive to make animations,” Greene says. “It’s hugely time-consuming to make computer-based interactive demonstrations. But if you’re not just reaching 30 kids in your own classroom, when you’re creating things that can reach hundreds of thousands of people, then the investment becomes worth it.”

The World Science U site is currently populated with WSU’s pilot offerings, including a short course and a longer, university-level course, plus more than 500 “Science Unplugged” clips, basic explainers with Greene candidly answering frequently asked scientific questions in about a minute or less each.

Some of the classes require no math knowledge at all; others require high-school-level calculus and physics.

The WSU website went live earlier this year. Since March, about 130,000 people have signed up to access the videos and courses, according to WSU’s tally. And the total number of views for the “Science Unplugged” clips is just shy of 1 million.

WSU has worked with 10 institutions, both domestic and international, to offer college credit when an onsite instructor teaches a class using WSU material. These include Greene’s own Columbia, as well as Duke University, the University of California, Santa Barbara, the University of Cape Town and others, says Kadi Hughes, special projects manager at World Science Festival.

Classes are taught in a “flipped” format, with the students watching videos of lectures as homework and then working through problem sets with the professor during class time.

“We added this to the catalog a week before the semester started,” he says. “I was gratified that the class was full to its capacity of 15 students.”

Plesser had his own experiences with digital learning; Duke University produced an online astronomy course he developed for another free online learning site, Coursera.

“The students liked the flipped format and enjoyed the recorded materials,” Plesser says. “The availability of animations and interactive demonstrations is very helpful. Students are more likely to watch the video than to read a chapter assigned in a book.”

“It feels much more immersive to see Brian Greene explaining advanced concepts in a video than simply reading assigned text,” Grube says. “And the weekly discussion periods with Professor Kagan made the course go from good to fantastic.”

This fall, WSU will expand its teaching staff to include other well-known scientists. MIT theoretical physicist and cosmologist Alan Guth will explain cosmic inflation, a theory he developed that made headlines earlier this year with preliminary support from observations made by the BICEP2 experiment.

WSU will eventually offer course content in other scientific disciplines beyond physics, Greene says. The plan is to offer future classes in biology, chemistry, astronomy and mathematics, taught by luminary instructors from these fields.