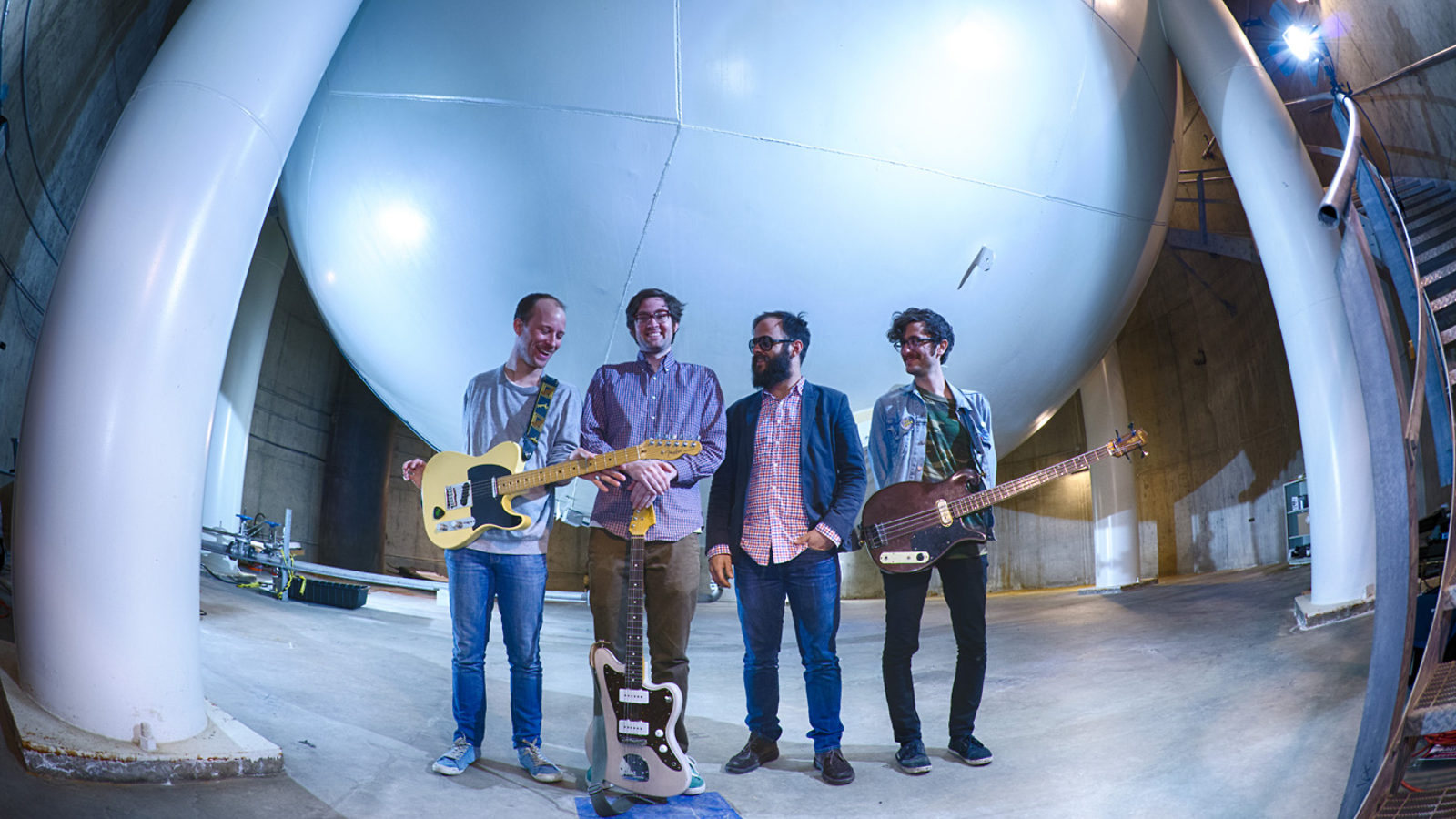 A New York rock band named after a Fermilab neutrino experiment recently visited their namesake for the first time.

But he is not, by any means, a scientist.

Schrashun is a financial consultant and a founding member of the band Miniboone, which shares a name with the first phase of the Booster Neutrino Experiment at Fermilab. Miniboone the band recently visited MiniBooNE the experiment for the first time.

Though Schrashun has never formally studied physics, he seems to have picked up enough to use it in his lyrics.

“‘Live fast and die young’ is just an expression,” Schrashun sings in the song “The Superposition of Affection.” “You live fast and live long, or relativity is totally wrong.”

At Fermilab in Batavia, Ill., the MiniBooNE experiment uses 1520 individual detectors, called phototubes, to study the mysterious properties of neutrinos, tiny particles that rarely interact with regular matter. In the bars and concert venues of New York City, Miniboone is a five-member rock band, an energetic collision of guitars, drums, keyboards and vocals.

It originally started as a two-man side project in which Schrashun and his college classmate, Craig Barnes, would write and perform songs from the perspective of a physicist in love—a kind of amalgamation of science and romance. Schrashun doesn’t remember exactly where he encountered the name of the MiniBooNE experiment, but once he did, it stuck.

Miniboone soon moved from side project to main gig—though the physicist-in-love concept didn’t stick. Schrashun and Barnes began recruiting other musicians and eventually rounded out their current lineup with band members James Keary, Tony Aquilino and Drew St. Aubin. They played their first show in December 2008 and, despite the demands of their day jobs, have been touring ever since.

In April, a tour brought them to Chicago, a mere 40 miles from their namesake experiment. They decided to make a pilgrimage to the lab on the invitation of one of their fans, postdoc Joe Grange from neighboring Argonne National Laboratory.

“I’m the one who has the most interest in science,” Schrashun says. “But when we came out to Fermilab, I think the other guys sort of got more of a sense of what everything was about, too. We have some sort of a sense of at least what’s involved in the experiment, even if we don’t know exactly all of the theoretical concepts behind it and all of that.”

On Sept. 10, the band will release its first full-length album, a self-titled record with “Superposition” as its opening track. As the band moves on to bigger things, its eponymous experiment is looking to smaller ones—MiniBooNE’s successor, MicroBooNE, will start taking data in 2014.

“If Miniboone ever loses a band member,” says Sam Zeller, leader of the next iteration of the BooNE experiment, “they should consider renaming themselves Microboone.”