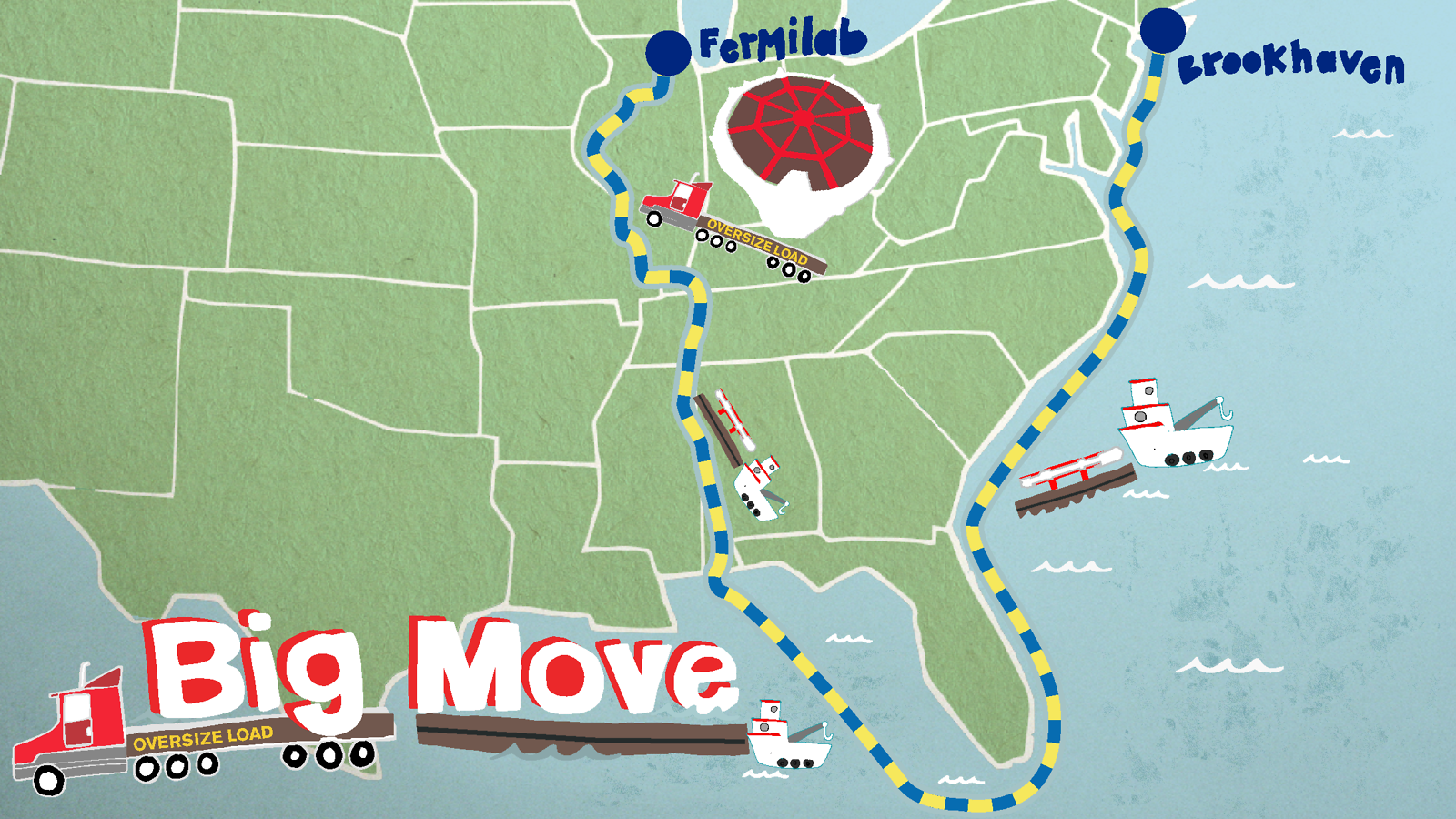 If you thought you saw a massive electromagnet being motored up the Mississippi River or driven along the Illinois roadways this summer, well, you weren’t imagining things.

Over 35 days in June and July, this fragile ring, made of aluminum and superconducting coils, took an unprecedented 3200-mile journey over land and sea from New York to Illinois. And along the way, it garnered thousands of fans and onlookers, people who followed its trip from Brookhaven National Laboratory to Fermilab.

The electromagnet is the centerpiece of the Muon g-2 experiment, based at Fermilab. It was originally built for a similar experiment at Brookhaven in the 1990s, an experiment that found tantalizing hints of physics beyond what scientists expected. Scientists would like to repeat that experiment using Fermilab’s accelerators, which can generate the most intense beam of muons in the world. The combination of this ultra-intense beam and the super precise electromagnet will allow for more precise measurement of the “wobble” of these short-lived subatomic particles when they are placed in a magnetic field. If the wobble differs from predictions, that could mean that there are as-yet-undiscovered particles out there.

One problem: building a new electromagnet of this quality would cost upwards of $30 million. The solution: transport Brookhaven’s magnet to Fermilab—very, very carefully. The ring would be damaged if it twisted or flexed more than a few millimeters, so it had to remain as flat as possible for the trip. 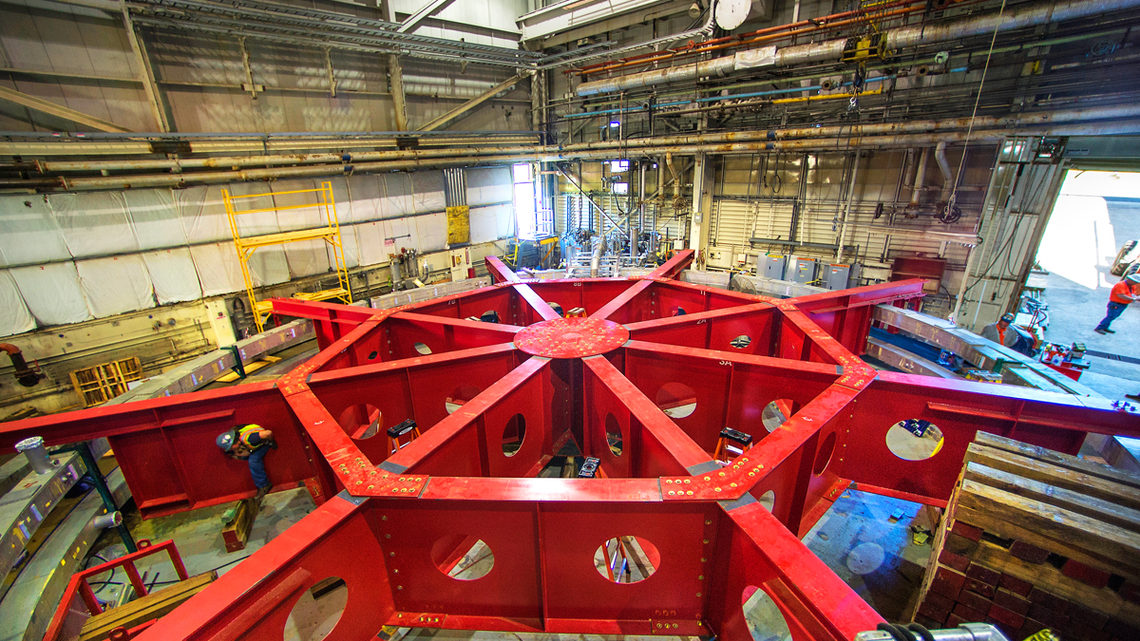 The Muon g-2 electromagnet in its old home at Brookhaven National Laboratory, where it lived from 2001 until June 2013. Workers from Emmert International affixed a red steel apparatus to the ring that kept it as flat as possible during transport. 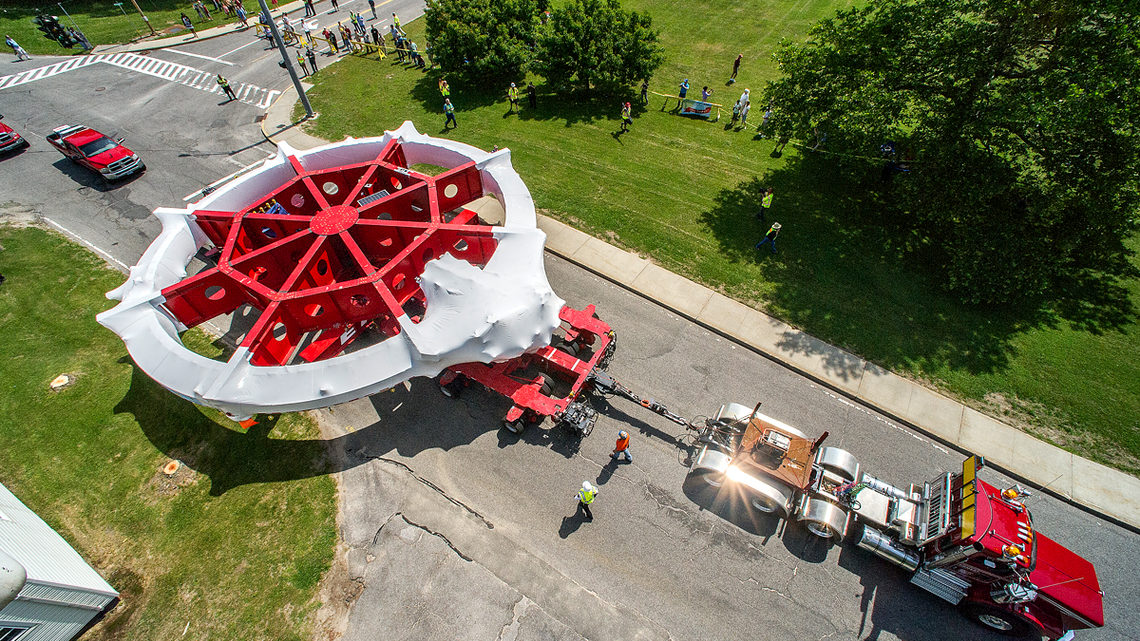 The truck used to transport the 50-foot-wide Muon g-2 ring had 16 independently controlled axles, and hydraulics to shift the load if necessary. This shot was taken as the ring moved across the Brookhaven site on June 22. 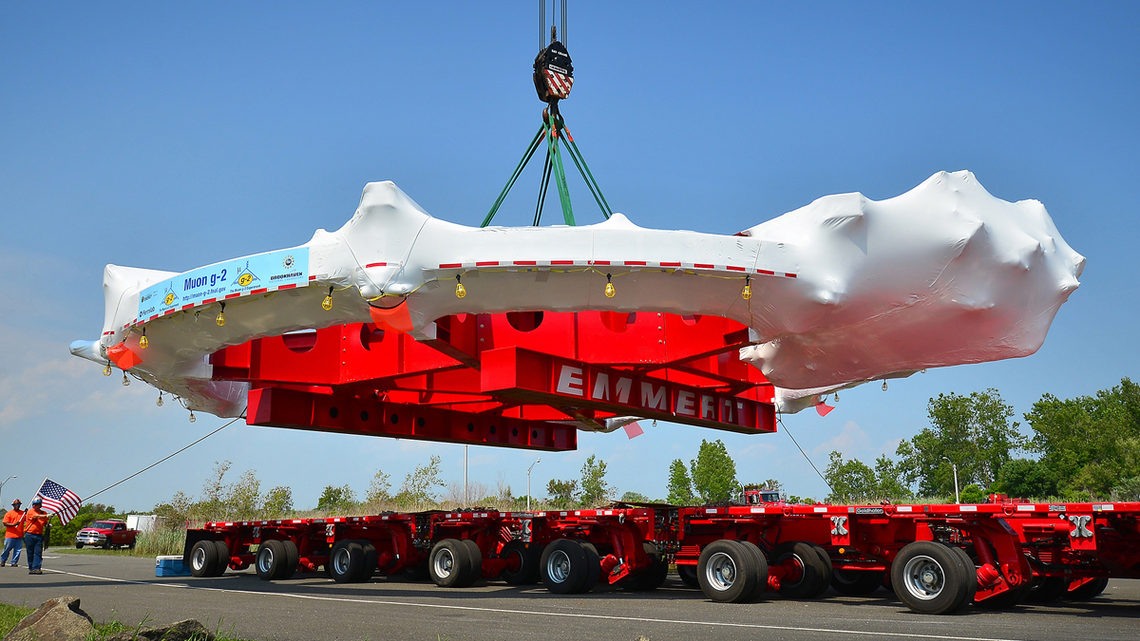 Workers used a massive crane to move the Muon g-2 electromagnet from the trailer of a specially adapted truck to a waiting barge at the Smith Point Marina on Long Island on June 24. 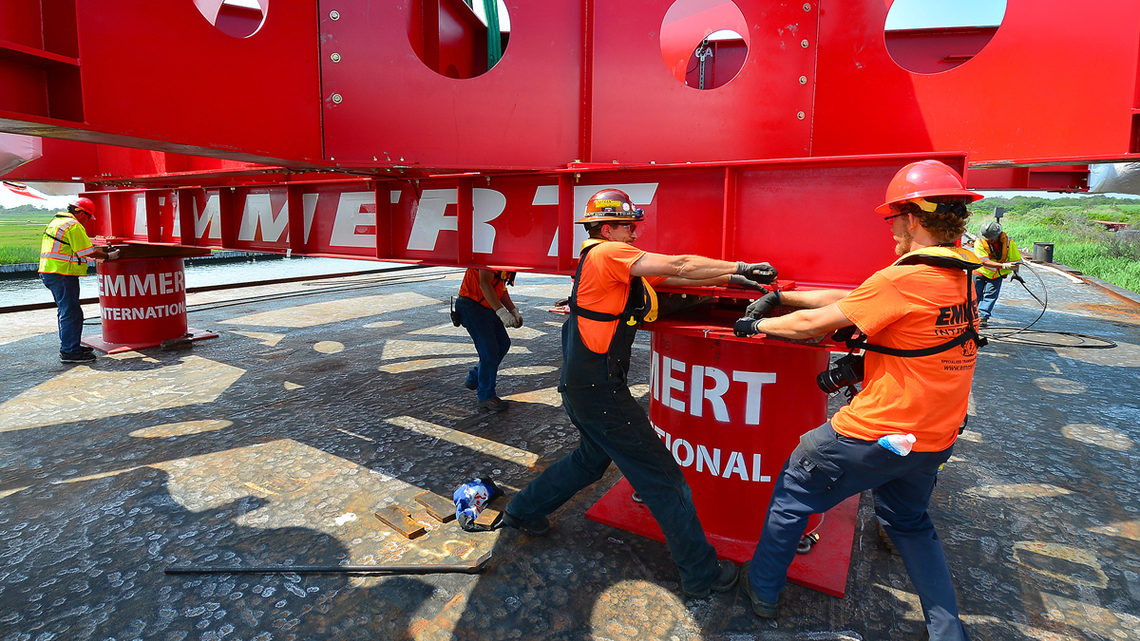 Emmert International employees affixed the Muon g-2 ring—which weighs 50 tons with the steel apparatus in place—to the barge that would take it to Illinois. This picture was taken at the Smith Point Marina on Long Island on June 24. 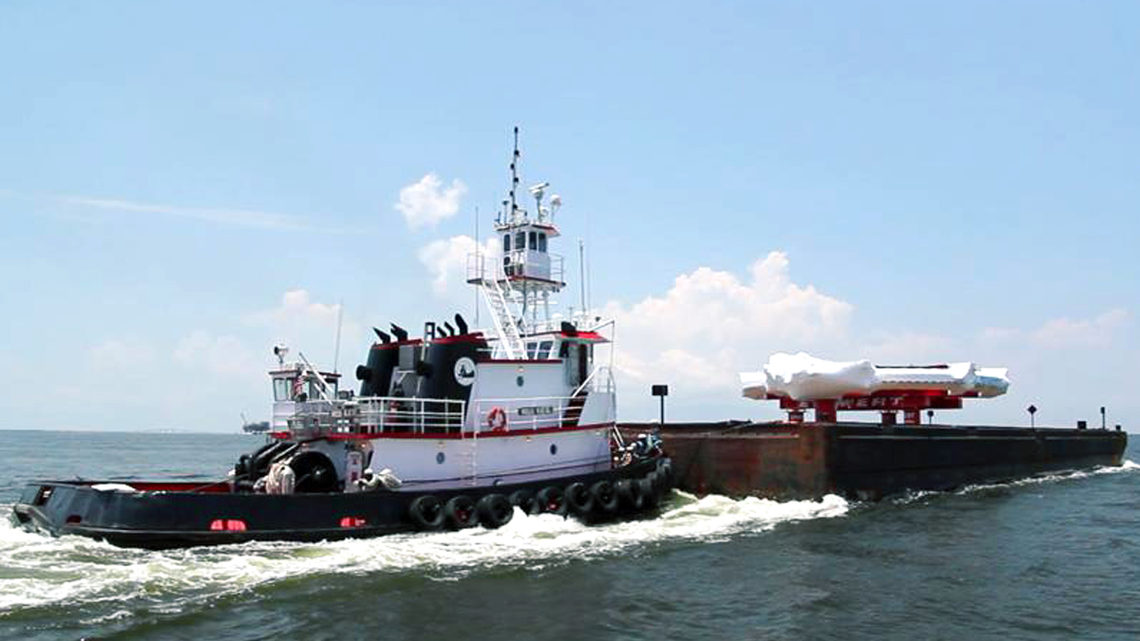 The tugboat Miss Katie pushed the Muon g-2 ring up the Tennessee-Tombigbee Waterway north of Mobile, Alabama, in mid-July. 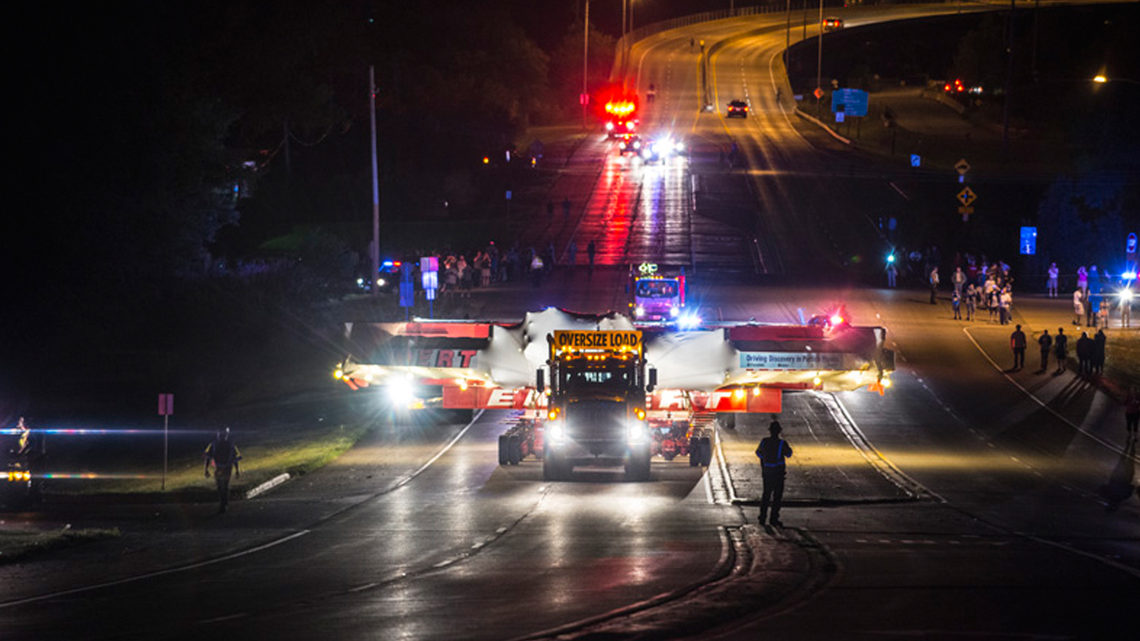 The 50-foot-wide Muon g-2 electromagnet was slowly driven through Lemont, Illinois, on July 23 while local residents watched. The truck moved no faster than 10 miles an hour during the trip. 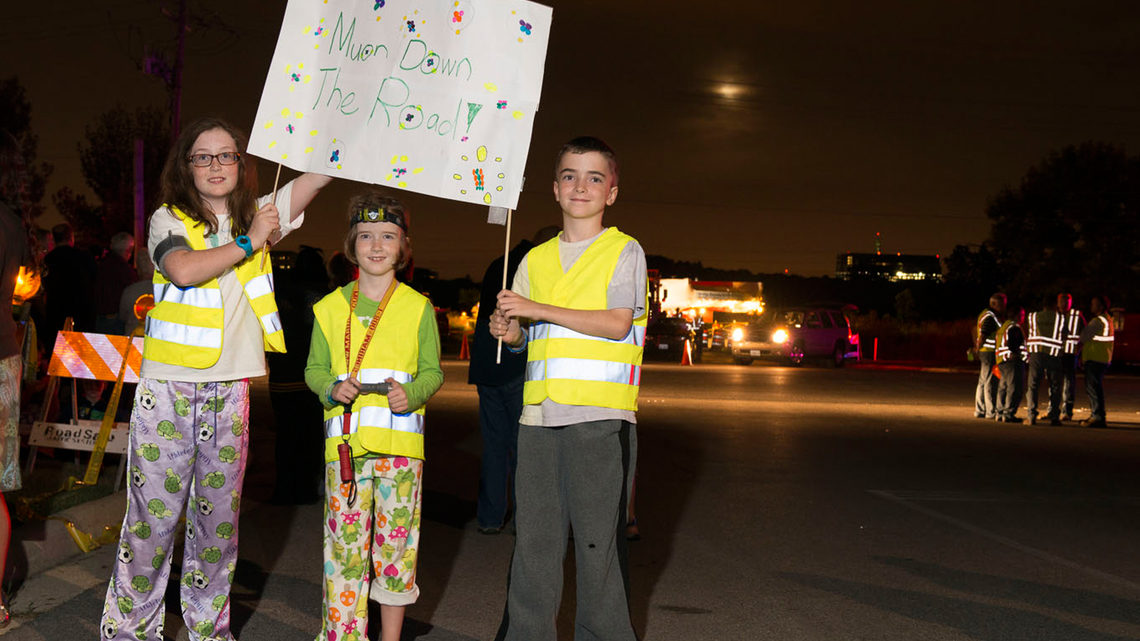 In their pajamas and safety vests, Maeve, Mary Kate and Kevin Pinkelman of Glen Ellyn, Illinois, cheered on the Muon g-2 ring. 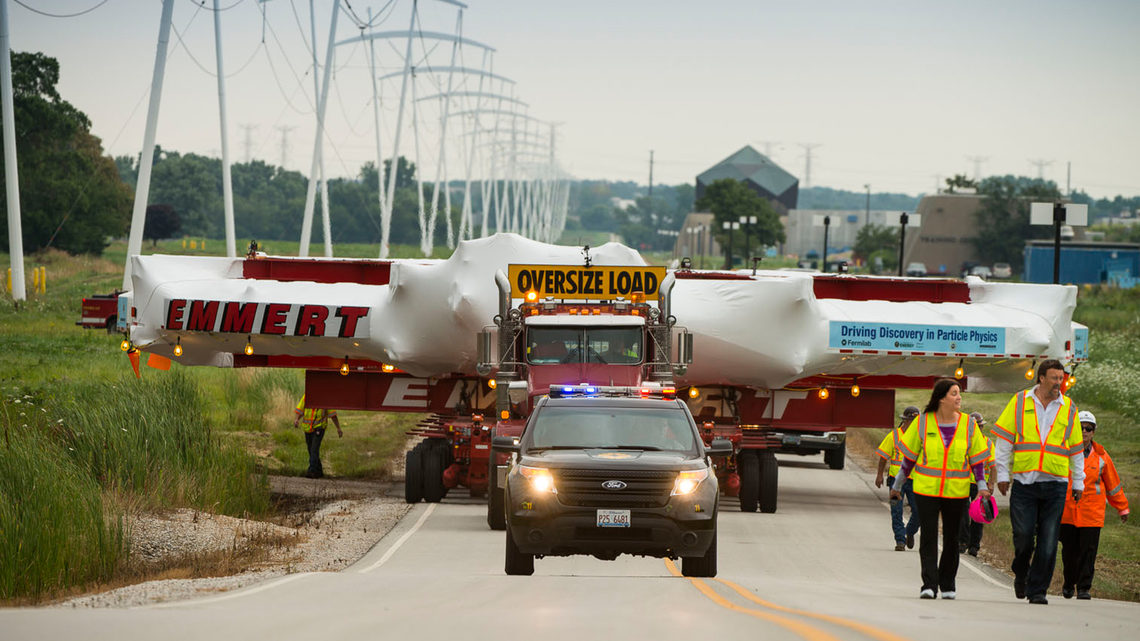 With Emmert International employees and Muon g-2 scientists walking alongside it, the giant electromagnet made its way across the Fermilab site. 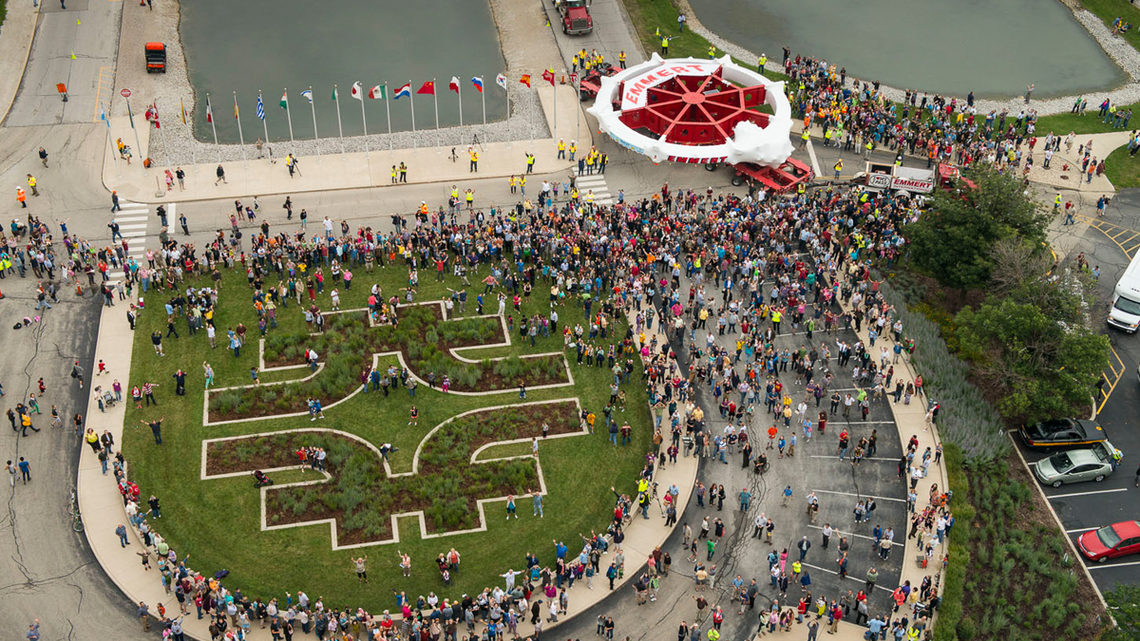 A crowd of thousands gathered outside Fermilab’s Wilson Hall on July 26 to welcome the Muon g-2 ring. 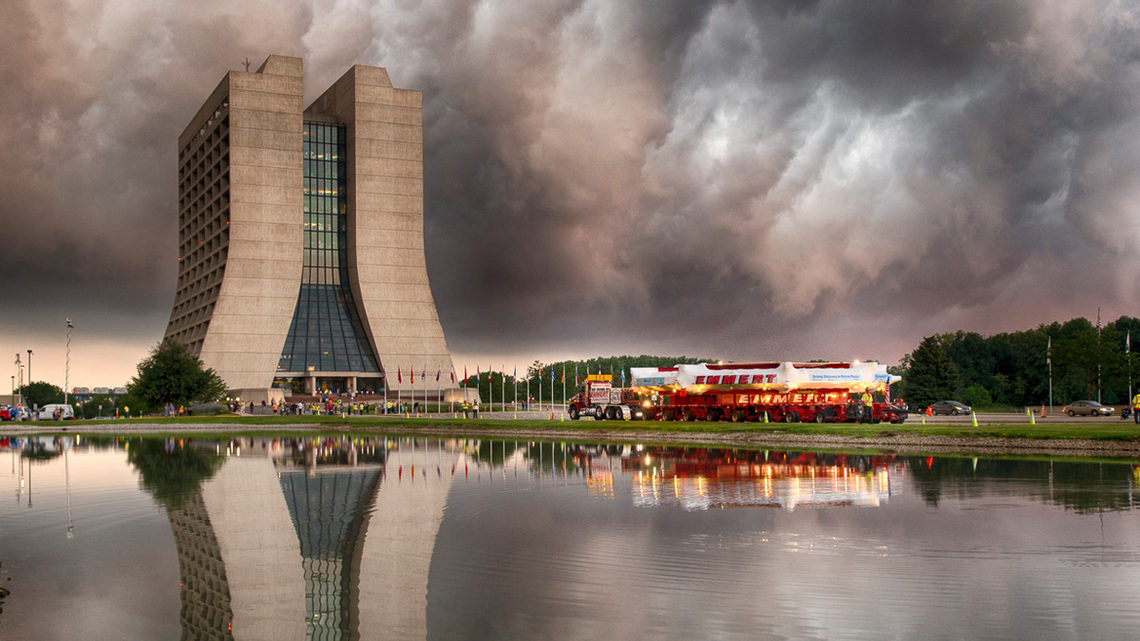 After the crowds dispersed, storm clouds gathered over Fermilab, where the Muon g-2 ring came to rest after completing its 3200-mile land and sea journey on July 26.

Photo by Fermilab
Previous Next

Beginning on June 22, Oregon-based Emmert International drove the magnet across Long Island on a specially adapted truck, then loaded it on a barge, sailed it down the East Coast, around Florida, into the Gulf of Mexico, and up a series of rivers to Illinois. Once there, the ring was loaded back onto that truck and driven over three nights to Fermilab, using rolling roadblocks to close the expressways.

The magnet arrived at Fermilab at 4:07 a.m. on July 26. The following afternoon, a crowd of more than 3000 fans cheered its journey to its final location on Fermilab's site. The jubilant crowd, which included physicists and science enthusiasts alike, was enthralled with both the magnet’s journey and the science made possible by its safe arrival.

Once the truck arrived at its destination, there were high-fives and congratulations all around. Truck driver Tim Benhardt even signed a few autographs for awestruck attendees. The Big Move concluded with a group photo, taken from the roof of Fermilab's Wilson Hall.