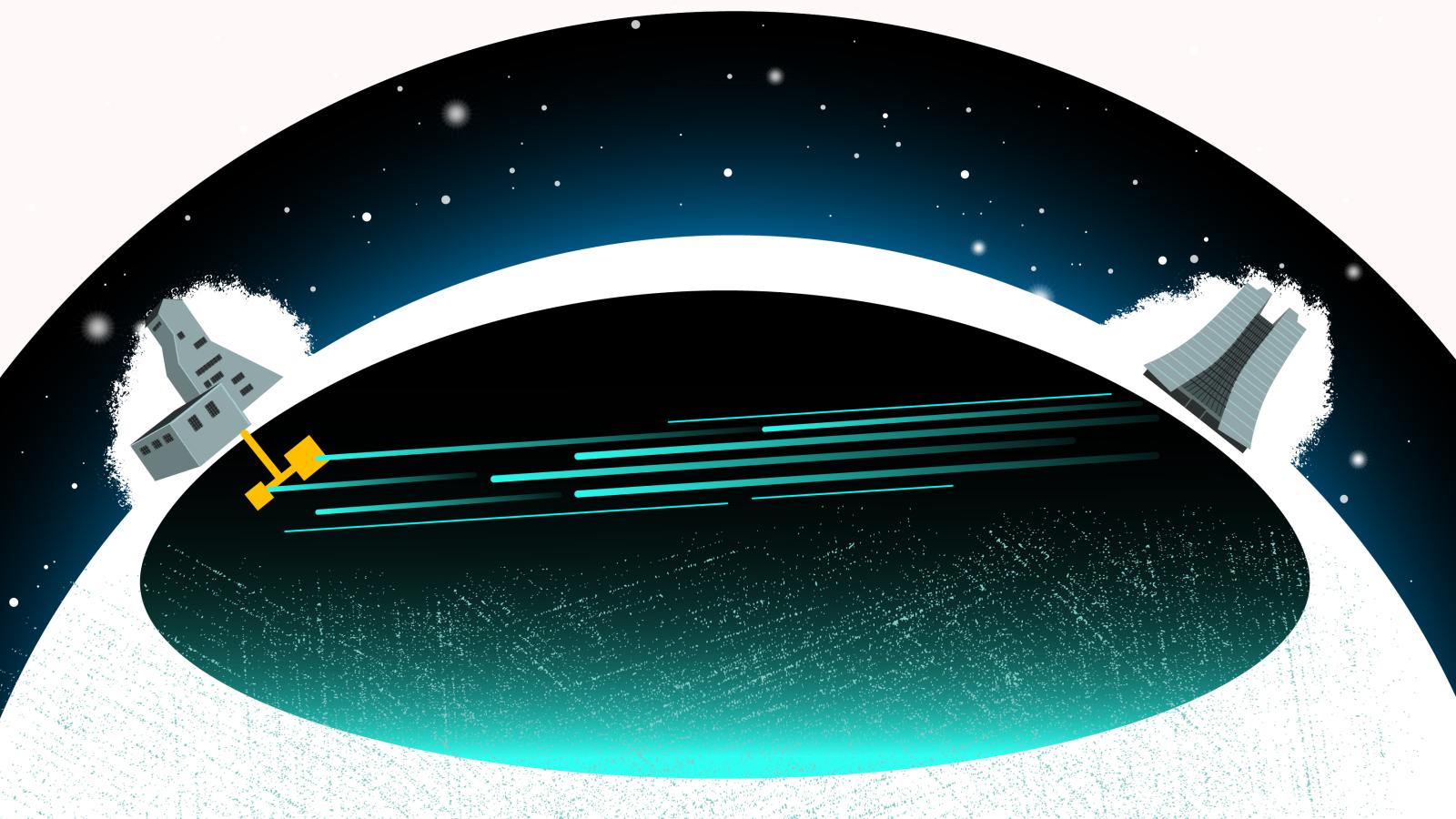 It started with a drive.

Physicists Ana Machado and Ettore Segreto trundled their car along an Italian road, headed from Gran Sasso National Laboratory on a 40-minute trip to pick up their son from kindergarten. As was often the case, physics was on their minds—in particular, the topic of light.

Light is a key tool in the physicist’s bag of tricks, able to give glimpses of far-off galaxies or streaks of subatomic particles. For physicists such as Machado and Segreto, it’s a crucial component in reconstructing the interactions of elusive particles called neutrinos. Neutrinos rarely interact, making every quantum of light—called a photon—released when they do a precious piece of data. How, the scientists wondered, could detectors more efficiently capture those gems of light?

They imagined a slender box that contained a silicon photomultiplier: a small detector that could count single photons. The box would contain a transparent top that light could easily pass through when entering, paired with a film that could shift the light to a different, visible wavelength. The transformed light, unable to escape through the same opening, would reflect inside the box until it was absorbed and detected by the silicon photomultiplier.

Later, Machado would liken the design to a bird trap and christen it with a name from the indigenous Guaraní word for “a trap to catch birds.” ARAPUCA was born.

With only a few months before the pair left Italy for new jobs at the University of Campinas in Machado’s home country of Brazil, they hurried to test their idea. After some internet shopping to find what filters and components they could purchase commercially (with their own money), they contacted a mechanic at Gran Sasso to help them build a box and install a silicon sensor. The simple prototype was a mere 3.3-square-centimeter container made of Teflon—but it proved the concept.

They had no idea then that their technology would soon unite scientists from across Latin America. 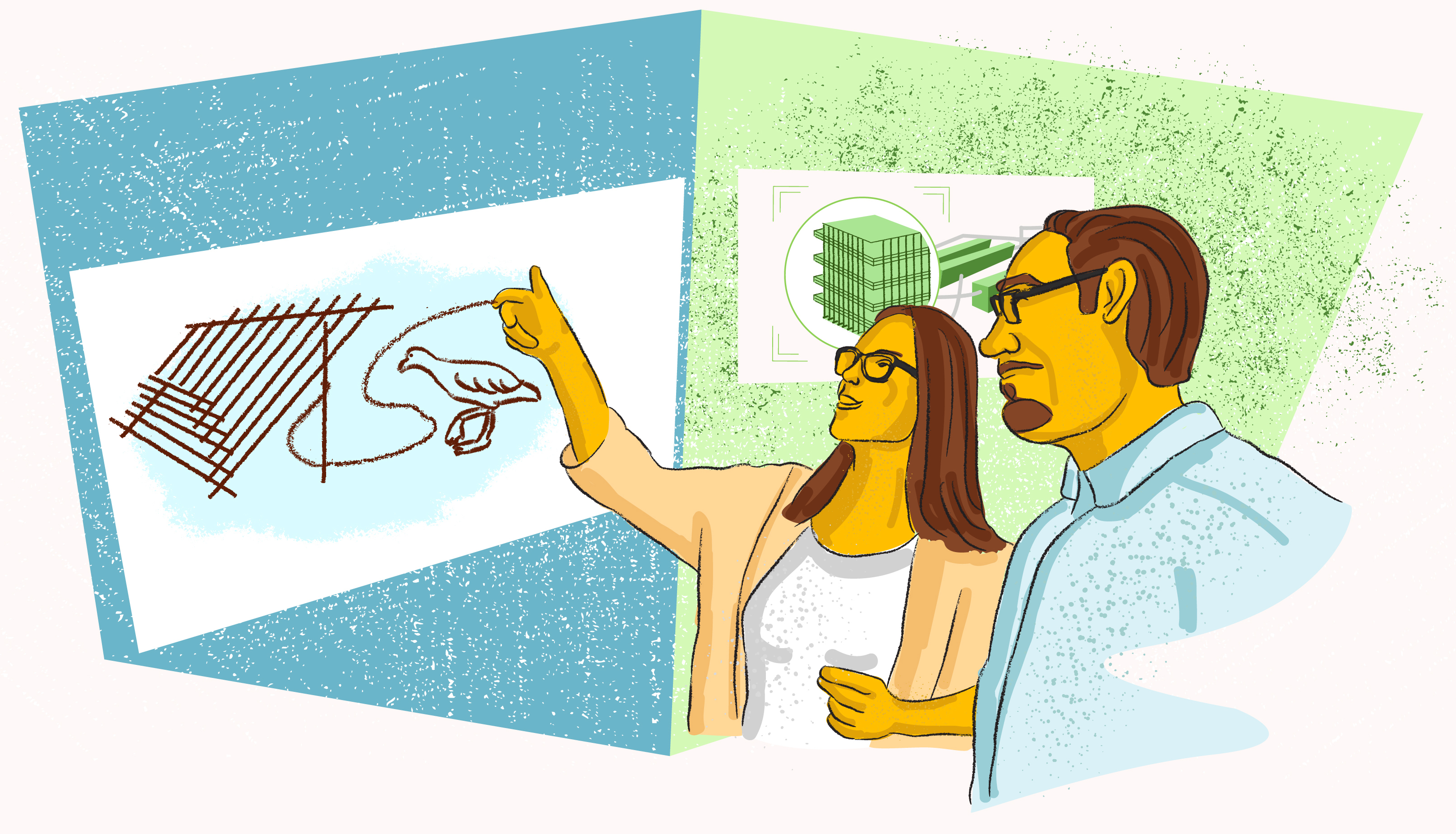 Flushed with success, the couple started their new jobs in Brazil with a focus on ARAPUCA technology and how it could be used in the international Deep Underground Neutrino Experiment (DUNE), an enormous undertaking supported by the US Department of Energy’s Office of Science and hosted by Fermi National Accelerator Laboratory near Chicago.

The massive project was beginning to take shape, with plans to construct some of the world’s largest neutrino detectors and install them 1.5 kilometers (about a mile) deep in a former-mine-turned-underground-laboratory. Shielded from extraneous signals, the detectors would then be bombarded with the world’s most intense high-energy neutrino beam.

The goal of DUNE is to unlock some of the mysteries of neutrinos, including the answer to the biggest question of all: whether they are part of the reason matter as we know it exists. To reach their aims, scientists would need to gather immense amounts of data from neutrino interactions—including the light.

At a 2015 conference in Albany, New York, Machado and Segreto presented the ARAPUCA design publicly for the first time. The reception was positive, and further tweaks and tests with Fermilab and new collaborators at Colorado State University showed a technology that was quickly maturing. The results were so good, Machado says, that they proposed installing 32 ARAPUCA modules in the first ProtoDUNE detector—a house-sized prototype to test technology for the even bigger final detectors of DUNE.

Even with the construction start-date looming, the collaboration accepted their proposal. The summer of 2017 found Machado and Segreto back in Europe, this time at CERN to install many of the ARAPUCA detectors over the course of six months. When the ProtoDUNE detector turned on in 2018, ARAPUCA’s success was clear: The technology worked, the light was there, and the tracks were beautiful.

“It's fun to think that everything started from that moment during that long drive,” Segreto says.

“We never had the idea that ARAPUCA would become what it is now,” Machado adds. “We never thought that this idea would become a reality. Everything that has happened for us has been such a surprise.” 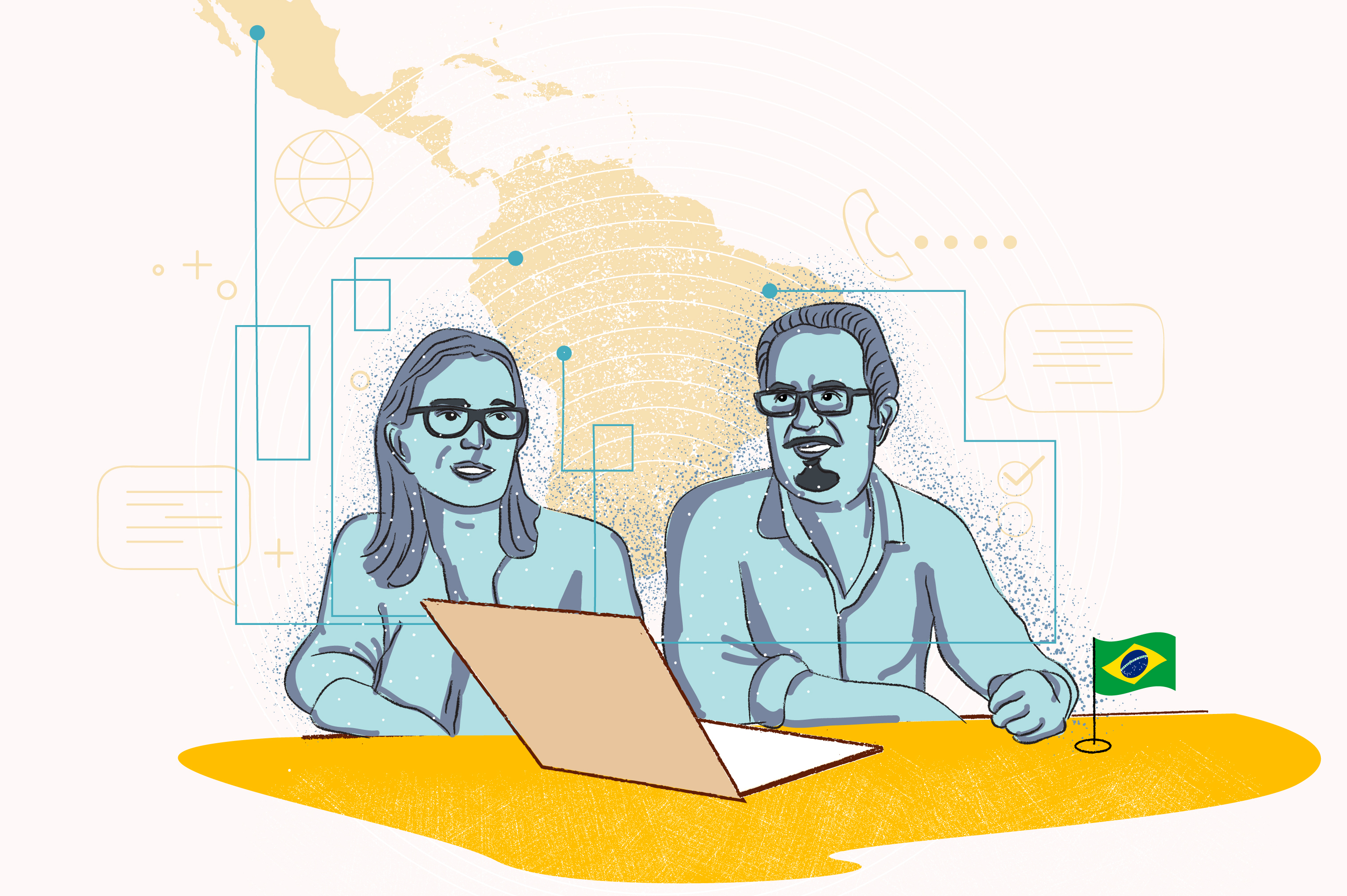 Spreading across the continent

Back in Brazil, Machado and Segreto found themselves at the center of a rapidly growing group.

ARAPUCA had become an important piece of technology for neutrino experiments, but it was still but one of a thousand parts needed to build DUNE. ARAPUCA would need to connect to cold electronics: the hardware that sits inside the liquid argon that makes up the bulk of the neutrino detector, hovering around a frosty negative 184 degrees Celsius (negative 300 degrees Fahrenheit). Those cold electronics would need to interface with DUNE’s warm electronics, which sit outside the detector at room temperature. Along with simulations and testing, there was plenty of work to do—and a growing number of people to lend a hand.

Scientific tendrils snaked their way from the University of Campinas to other universities in Brazil and on to other Latin American countries, binding together a Latin American consortium focused on the detection of light. Machado made many of the connections personally. She reached out to fellow physicists, some of whom she knew from her PhD program, and encouraged them to join with their teams.

That was how Jorge Molina, a scientist in the engineering school at the National University of Asunción in Paraguay, got involved. The school doesn’t have a postgraduate program in physics, but the engineers excel at instrumentation, so they joined to work on the electronics in 2017.

“This is a great opportunity,’” Molina says. “We’ve never been delegated a huge project like this. It’s a chance to demonstrate we can do it, and do it well. This will be the door for the next big project that comes.”

Sometimes, a lack of scientific infrastructure in the country—which has a population of 7 million, about the same as Massachusetts—means Molina’s group has to take their science on the road. Paraguay sent one researcher to Fermilab to test electronics in cryogenic temperatures at the ICEBERG testbed earlier this year.

For many partners, participating in ARAPUCA is a chance to expand their skills. The Colombian team joined to work on the warm electronics, building on their decade of experience with running simulations for the ATLAS experiment at the Large Hadron Collider at CERN and digitizing signals for small neutrino experiments.

“The difference between ATLAS and DUNE, and something that I like a lot, is that when we started on ATLAS, the detector was already designed,” says Deywis Moreno Lopez, a scientist at Colombia’s University of Antonio Nariño. “With DUNE, we have the opportunity to participate directly in the design and construction of the components. It’s a very nice opportunity to get the universities involved and make a closer contact with industry." 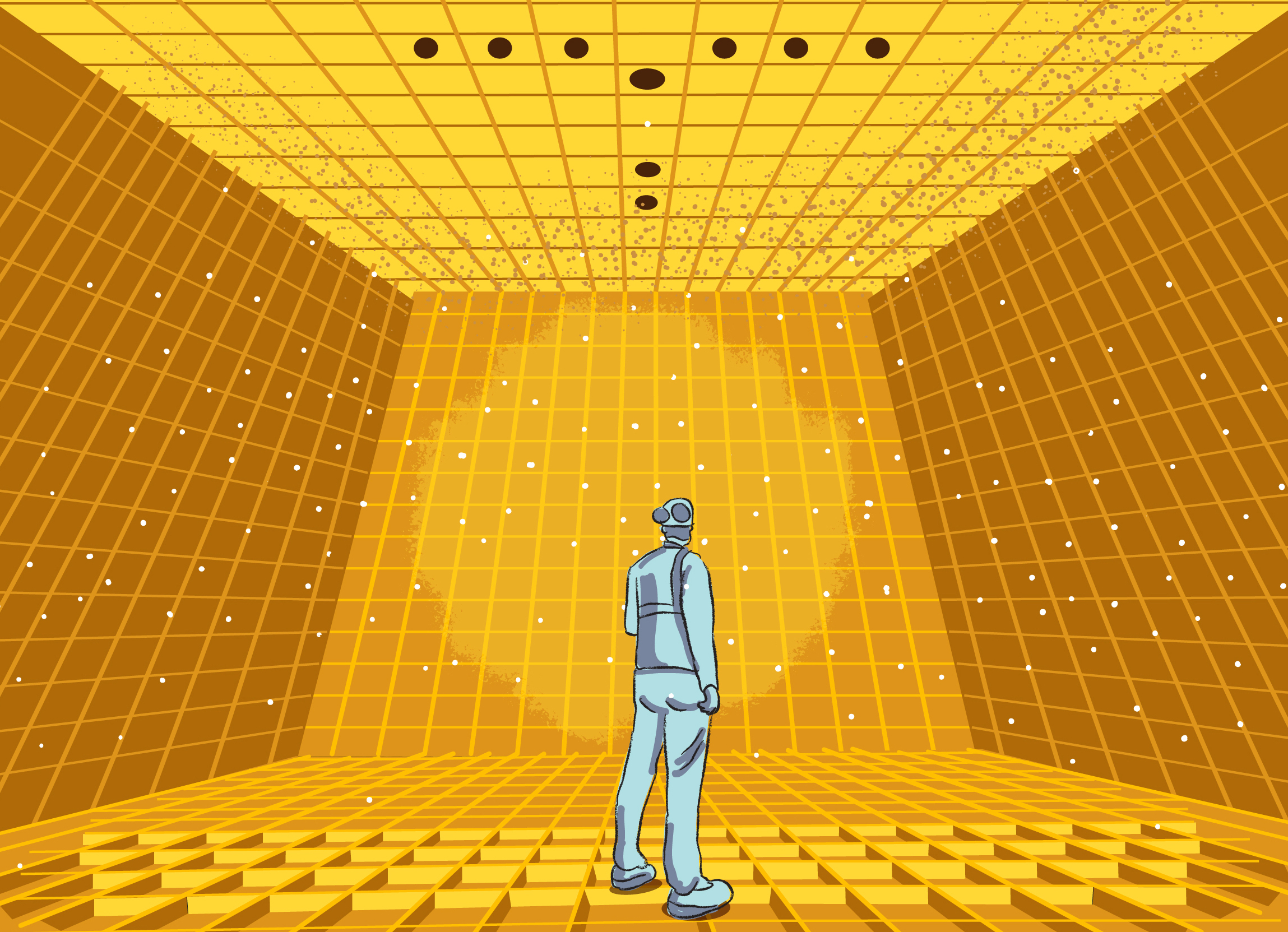 Industrial partners will be vital for producing the hundreds upon hundreds of pieces necessary to instrument the large detectors of DUNE. Each of the four far-detector modules will hold 17,000 tons of liquid argon inside a container four stories high. Accelerator operators at Fermilab will send trillions of neutrinos from the accelerator complex in Illinois straight through the earth, no tunnel required, to the detectors in South Dakota. The fraction of neutrinos that interact will produce additional particles, including electrons and light, that will be captured by the electronics, processed by computing algorithms, and stored for data analysis. The invisible will become visible.

“This is something that is almost science fiction,” says Cesar Castromonte, a physicist at Peru’s National University of Engineering and part of the group from Peru that began working on ARAPUCA earlier this year. “People are totally surprised most of the time when I talk about neutrinos—and surprised that there are Peruvian people working on this kind of stuff.”

That “stuff” for DUNE includes hunting for an explanation as to why matter exists in our universe, trying to determine whether protons decay, and working to better understand exploding stars and the formation of black holes. They’re giant science goals using the biggest detector of its kind, and collaborators know they need to bring the best technological solutions in their arsenals. Not long after the initial ARAPUCA tests were successful, the team began working on upgrades to the design to make the equipment even better.

The new X-ARAPUCA rolled in additional light guides within the box that funneled photons toward the sensor. Tests showed even more light captured than before, and scientists decided to incorporate 200 of the newly designed modules into the plans for the Short-Baseline Near Detector (SBND) at Fermilab—another neutrino experiment and another good test for DUNE technologies. Machado says she expects the electronic boards, filters and mechanical structures to be shipped to Fermilab, assembled and installed in SBND around December.

With DUNE test detectors running, cavern preparation for the massive far detectors at Sanford Lab underway, and a recent groundbreaking for Fermilab’s new accelerator upgrades, teams around the world are pushing their pieces of DUNE forward quickly and aiming to start up the experiment around 2026.

“We are very excited,” Castromonte says. “It’s a once-in-a-lifetime chance.