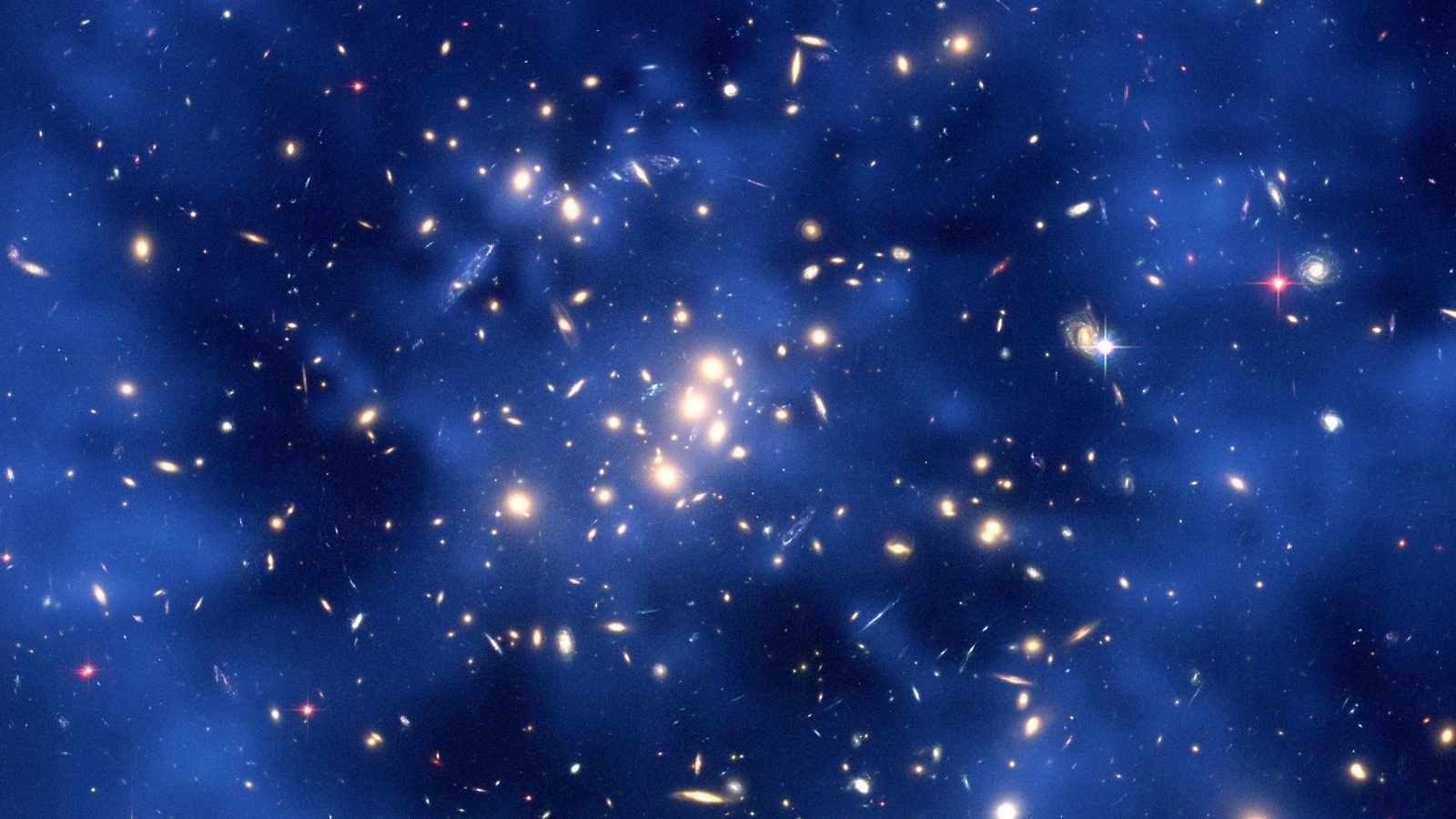 The race for the discovery of dark matter is on. Several experiments worldwide are searching for the mysterious substance and pushing the limits on the properties it may have.

Scientists know that dark matter exists because it has a gravitational effect on visible objects made of ordinary matter. And they know that there is a lot of it; dark matter is thought to be about five times as prevalent as other matter in the universe. Yet, dark matter has managed to evade detection so far.

Similar to normal matter, dark matter is commonly believed to be composed of particles. Scientists’ current best guess is that these particles are WIMPs: weakly interacting massive particles. These particles would pass right through ordinary matter. That’s because they would interact only through the weak nuclear force—which works only over short distances—and gravity.

Scientists are trying to create WIMPs in collisions at the Large Hadron Collider. But it could be that they are too massive to produce in such an accelerator. Scientists are also trying to find WIMPs with detectors deep underground. But so far they haven’t appeared.

That’s why scientists also search for dark matter indirectly—rather than trying to catch the WIMPs themselves, they look for other signs that they’re around. These signs could come in the form of extra gamma rays, cosmic rays or neutrinos, or in patterns imprinted on the cosmic microwave background radiation left over from just after the big bang.

It could also be that unstable dark matter particles produce gamma rays as they decay.

Either way, one would expect that an area dense with dark matter would be marked by a higher-than-usual amount of these energetic rays. Many recent studies claim to have found hints of the existence of dark matter in gamma rays, but not all scientists are convinced.

One area that should be dense with dark matter is the center of our own galaxy, the Milky Way. That’s where scientists are looking for excess gamma rays using the Large Area Telescope on NASA’s Fermi Gamma-ray Space Telescope spacecraft, which has been orbiting the Earth since 2008.

Last year, the Fermi-LAT collaboration reported its latest analysis of the galactic center, in which the scientists saw a gamma-ray excess similar to other groups before. However, the researchers have not ruled out interpretations due to sources other than dark matter.

The center of the galaxy is an extremely complex region, says Fermi-LAT researcher Troy Porter of the Kavli Institute for Particle Astrophysics and Cosmology, a joint institute of Stanford University and SLAC National Accelerator Laboratory.

“The galactic center is very active and it contains many different gamma-ray sources, some of which we don’t even know yet,” he says. “In order to be able to identify any potential dark matter signal, we must first know the level of gamma rays from all other possible sources very precisely.”

Other locations to search for dark matter signals are dwarf satellite galaxies that orbit the Milky Way, says Fermi-LAT researcher Matthew Wood at KIPAC, who was the co-leader of two recent analyses of 15 known dwarf galaxies and eight new dwarf galaxy candidates discovered by scientists of the Dark Energy Survey and University of Cambridge in the UK.

“Dwarf galaxies are dominated by dark matter and don’t contain any known gamma-ray sources,” he says. “These objects, which have more than a million times fewer stars than our own galaxy, are ideal targets for indirect dark matter searches.”

In March, researchers from Carnegie Mellon University, Brown University and the University of Cambridge published an analysis claiming to have found excess gamma rays in one of these dwarf galaxy candidates. The Fermi-LAT and DES collaborations, however, found no definitive sign of such an excess.

The Fermi-LAT instrument can detect gamma rays with energies of up to several hundred billion electronvolts. However, the gamma rays produced by WIMPs could be even more energetic.

This is where ground-based gamma-ray observatories come in.

“To detect gamma rays with an energy of a trillion electronvolts or larger, we need detectors with a large surface area—larger than what we can possibly accommodate aboard a spacecraft,” says physicist Gernot Maier, who leads a group at the German research center DESY that is searching for high-energy gamma rays on the VERITAS experiment in Arizona.

VERITAS, along with MAGIC on the Canary Islands and H.E.S.S. in Namibia, uses an array of telescopes that detect particle showers caused by gamma rays as they travel through the Earth’s atmosphere. None of them have spotted signs of dark matter yet.

Next year, a new ground-based gamma-ray observatory will begin construction. The Cherenkov Telescope Array will consist of about 100 telescopes and will be 10 times as sensitive to high-energy gamma rays from dark matter interactions.

Cosmic rays are extremely energetic radiation composed of charged particles. Just as dark matter annihilations or decays could produce gamma rays, they could also produce cosmic rays. So an unexplained excess of this type of radiation might point to the presence of dark matter.

For the past four years, AMS has studied cosmic rays from its perch on the side of the International Space Station.

“So far the data are totally consistent with WIMP annihilations,” Ting says of the AMS measurements of electrons and positrons in cosmic rays.

AMS isn’t the only experiment to spot a possible sign of dark matter in cosmic rays. In 2009, the PAMELA satellite experiment reported a surplus of cosmic-ray positrons—a result that Fermi-LAT researchers confirmed in 2011.

Ting says the AMS collaboration plans to release their next results this month.

Neutrinos from the sun

Experiments that search for signs of dark matter in neutrinos use the sun as a dark matter detector. WIMPs could get gravitationally trapped in the center of the massive star. Once the density of WIMPs there became large enough, they could annihilate and produce neutrinos.

Scientists use observatories such as ANTARES under the Mediterranean Sea, the Lake Baikal Neutrino Telescope in Russia, Super-Kamiokande in Japan and IceCube at the South Pole to look for such an event.

“Only neutrinos are able to escape from the center of the sun,” says IceCube leader Francis Halzen of the University of Wisconsin, Madison. “If we ever find such a high-energy neutrino signal, there will be no debate as to whether we have found a dark matter signature or not.”

Unlike gamma or cosmic rays, which can have several astrophysical origins, high-energy neutrinos emerging from the center of the sun could be produced only in dark matter annihilations.

Caught in the afterglow

The Cosmic Microwave Background is the afterglow of the big bang 14 billion years ago. It exists as a faint pattern of light on the sky. If WIMPs existed in the early universe, they should have left their fingerprint on this radiation.

From 2009 to 2013, the European Space Agency’s Planck space telescope recorded a precise map of this light.

“We measured the dark matter content of the young universe, when it was only 380,000 years old,” says Planck project scientist Jan Tauber.

Planck’s latest publication, released in February, put constraints on the properties of hypothetical WIMPs that are in conflict with the interpretation of positron-excess data from PAMELA, AMS and Fermi-LAT.

The search goes on

No one knows which method, if any, will lead to the discovery of dark matter. But one thing is clear: Dark matter is quickly losing places to hide.