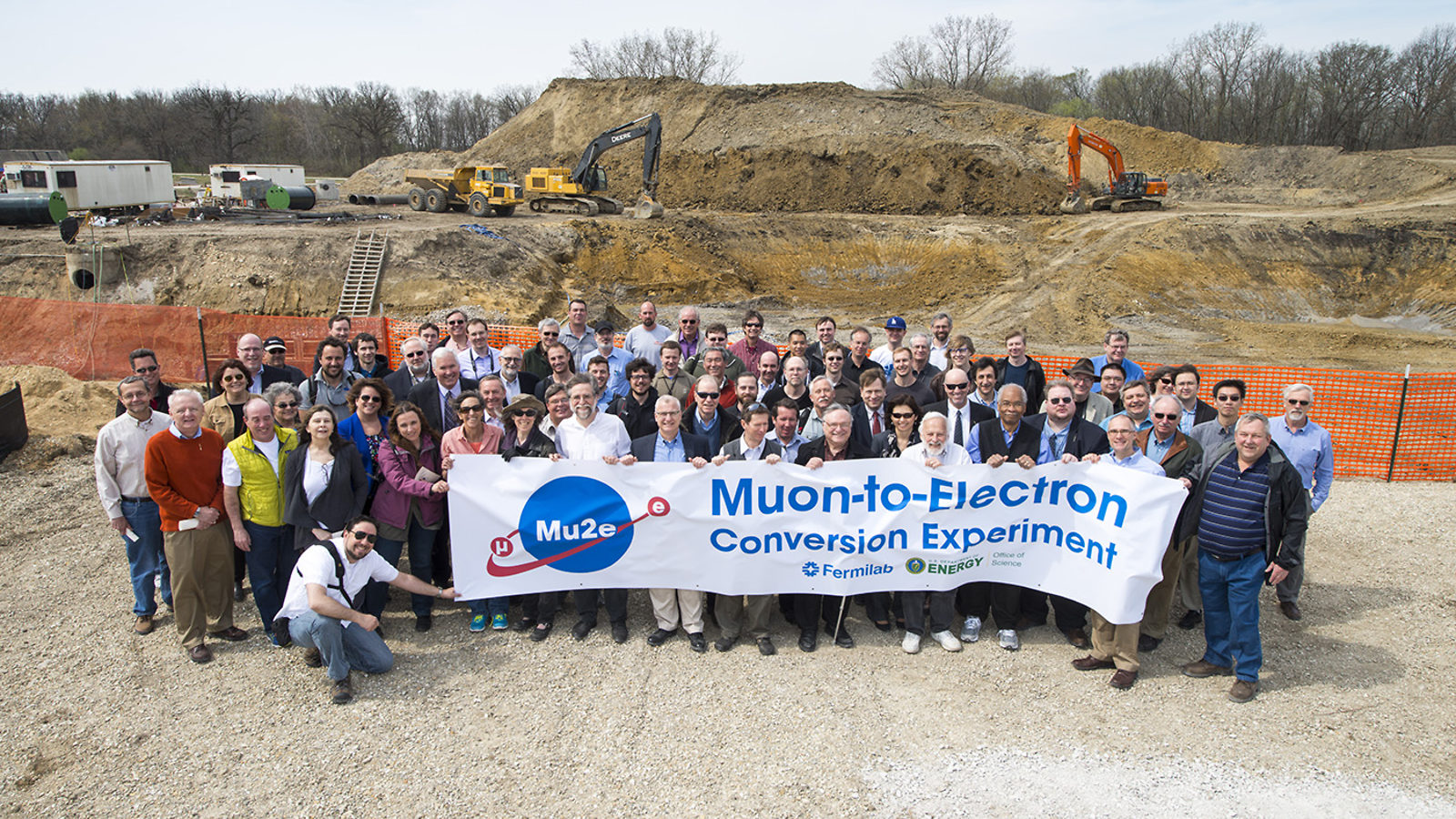 This weekend, members of the Mu2e collaboration dug their shovels into the ground of Fermilab's Muon Campus for the experiment that will search for the direct conversion of a muon into an electron in the hunt for new physics.

For decades, the Standard Model has stood as the best explanation of the subatomic world, describing the properties of the basic building blocks of matter and the forces that govern them. However, challenges remain, including that of unifying gravity with the other fundamental forces or explaining the matter-antimatter asymmetry that allows our universe to exist. Physicists have since developed new models, and detecting the direct conversion of a muon to an electron would provide evidence for many of these alternative theories.

"There's a real possibility that we'll see a signal because so many theories beyond the Standard Model naturally allow muon-to-electron conversion," said Jim Miller, a co-spokesperson for Mu2e. "It'll also be exciting if we don't see anything, since it will greatly constrain the parameters of these models."

Muons and electrons are two different flavors in the charged-lepton family. Muons are 200 times more massive than electrons and decay quickly into lighter particles, while electrons are stable and live forever. Most of the time, a muon decays into an electron and two neutrinos, but physicists have reason to believe that once in a blue moon, muons will convert directly into an electron without releasing any neutrinos. This is physics beyond the Standard Model.

Under the Standard Model, the muon-to-electron direct conversion happens too rarely to ever observe. In more sophisticated models, however, this occurs just frequently enough for an extremely sensitive machine to detect.

The Mu2e detector, when complete, will be the instrument to do this. The 92-foot-long apparatus will have three sections, each with its own superconducting magnet. Its unique S-shape was designed to capture as many slow muons as possible with an aluminum target. The direct conversion of a muon to an electron in an aluminum nucleus would release exactly 105 million electronvolts of energy, which means that if it occurs, the signal in the detector will be unmistakable. Scientists expect Mu2e to be 10,000 times more sensitive than previous attempts to see this process.

Construction will now begin on a new experimental hall for Mu2e. This hall will eventually house the detector and the infrastructure needed to conduct the experiment, such as the cryogenic systems to cool the superconducting magnets and the power systems to keep the machine running.

"What's nice about the groundbreaking is that it becomes a real thing. It's a long haul, but we'll get there eventually, and this is a start," said Julie Whitmore, deputy project manager for Mu2e.

The detector hall will be complete in late 2016. The experiment, funded mainly by the Department of Energy Office of Science, is expected to begin in 2020 and run for three years until peak sensitivity is reached.

"This is a project that will be moving along for many years. It won't just be one shot," said Stefano Miscetti, the leader of the Italian INFN group, Mu2e's largest international collaborator. "If we observe something, we will want to measure it better. If we don't, we will want to increase the sensitivity."

Physicists around the world are working to extend the frontiers of the Standard Model. One hundred seventy-eight people from 31 institutions are coming together for Mu2e to make a significant impact on this venture.

"We're sensitive to the same new physics that scientists are searching for at the Large Hadron Collider, we just look for it in a complementary way," said Ron Ray, Mu2e project manager. "Even if the LHC doesn't see new physics, we could see new physics here."