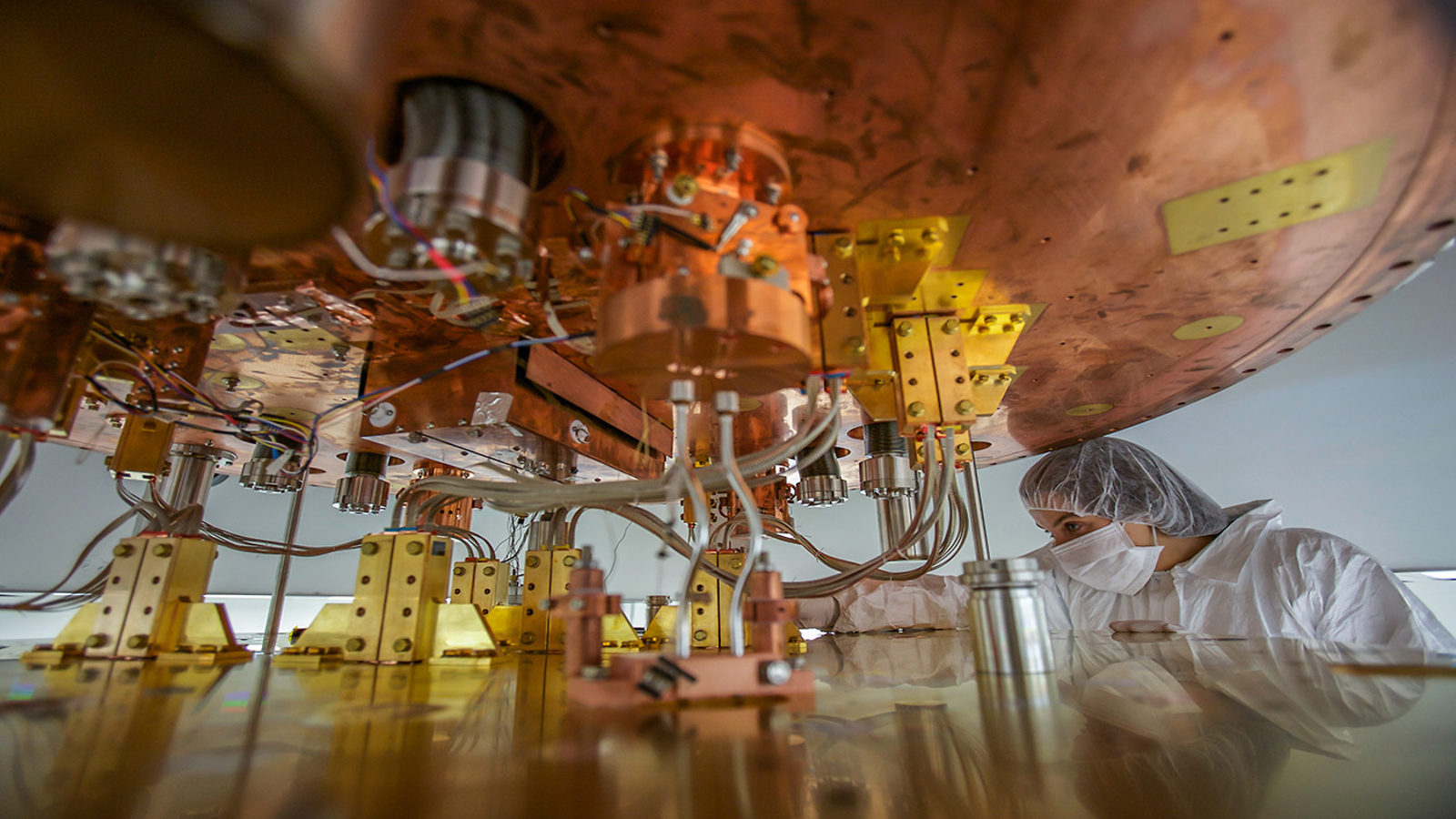 Scientists on an experiment in Italy are looking for a process so rare, it is thought to occur less than once every trillion, trillion years. To find it, they will create the single coldest cubic meter in the universe.

The experiment, the Cryogenic Underground Observatory for Rare Events, will begin by the end of the year, scientists recently announced after a smaller version demonstrated the feasibility of the design.

The project, based at Gran Sasso National Laboratory, will examine a property of ghostly neutrinos by looking for a process called neutrinoless double beta decay. If scientists find it, it could be a clue as to why there is more matter than antimatter in the universe–and show that neutrinos get their mass in a way that’s different from all other particles.

The full CUORE experiment requires 19 towers of tellurium dioxide crystals, each made of 52 blocks just smaller than a Rubik’s cube. Physicists will place these towers into a refrigerator called a cryostat and cool it to 10 millikelvin, barely above absolute zero. The cryostat will eclipse even the chill of empty space, which registers a toasty 2.7 Kelvin (minus 455 degrees Fahrenheit).

CUORE uses the cold crystals to search for a small change in temperature caused by these rare nuclear decays. Unlike ordinary beta decays, in which electrons and antineutrinos share energy, the neutrinoless double beta decay produces two electrons, but no neutrinos at all. It is as if the two antineutrinos that should have been produced annihilate one another inside the nucleus.

“This would be really cool because it would mean that the neutrino and the antineutrino are the same particle, and most of the time we just can’t tell the difference,” says Lindley Winslow, a professor at MIT and one of over 160 scientists working on CUORE.

Neutrinos could be the only fundamental particles of matter to have this strange property.

For the past two years, scientists collected data on just one of the crystal towers housed in a smaller cryostat, a project called CUORE-0. The most recent result establishes the most sensitive limits for seeing neutrinoless beta decay in tellurium crystals. In addition, the researchers verified that the techniques developed to construct CUORE work well and reduce background radiation prior to the full experiment coming online.

“It’s a great result for Te-130. We are also very excited that we were able to demonstrate that what’s coming online with CUORE is what we hoped it would be,” says Reina Maruyama, professor of physics at Yale University and a member of the CUORE Physics Board. “We look forward to shattering our own result from CUORE-0 once CUORE comes to life”

Avoiding radioactive contamination and shielding the experiment from outside sources that might mimic the telltale energy signature CUORE is searching for is a priority. The mountains at Gran Sasso will provide one layer of shielding from cosmic bombardment, but the CUORE cryostat will also get a second layer of protection against the minor radiation of the mountain itself. Ancient Roman lead ingots, salvaged from a shipwreck that occurred more than 2000 years ago, have been melted down into a shield that will cocoon the crystal towers.

Lead excels at blocking radiation but can itself become slightly radioactive when hit by cosmic rays. The ingots that sat at the bottom of the sea for two millennia have been spared cosmic bombardment and provide very clean, if somewhat exotic, shielding material.

The next step for CUORE will be to finish commissioning the powerful refrigerator, the largest of its kind. The cryostat must remain stable even with the tons of material inside. After the detector is installed and the cryostat cooled, it will likely take between six months and a year to find the ultimate sensitivity, measure contamination (if there is any), and show that the detector works perfectly, says Yury Kolomensky, senior faculty scientist in the Physics Division at Berkeley Lab and the US spokesperson for the CUORE collaboration. Then it will take data for five years.

“And then we hope to come back with either a discovery [of neutrinoless double beta decay]–or not. And if not, that means we have shrunk the size of the haystack by a factor of 20,” Kolomensky says.

If CUORE goes well, it could find itself a contender for the next generation of neutrinoless double beta decay experiments, something Kolomensky says the nuclear physics community plans to decide over the next two to three years. CUORE uses tellurium, a plentiful isotope that has good energy resolution, meaning scientists can tell precisely where the peak is and what caused it. Other large-scale neutrinoless double beta decay experiments use germanium or xenon instead.

“The worldwide community is looking at all the technologies very carefully,” Kolomensky says. “If our detector works as advertised at this scale, we’ll be in a very strong position to build an even better detector.”

CUORE’s journey has already been more than 30 years in the making, according to Oliviero Cremonesi, spokesperson for the collaboration.

“It’s very emotional for me. We started in the ‘80s with milligram prototypes, and now we have a ton-size detector and a unique cryogenic system,” Cremonesi says. “Even more exciting is the knowledge that this adventure could continue in the future.”