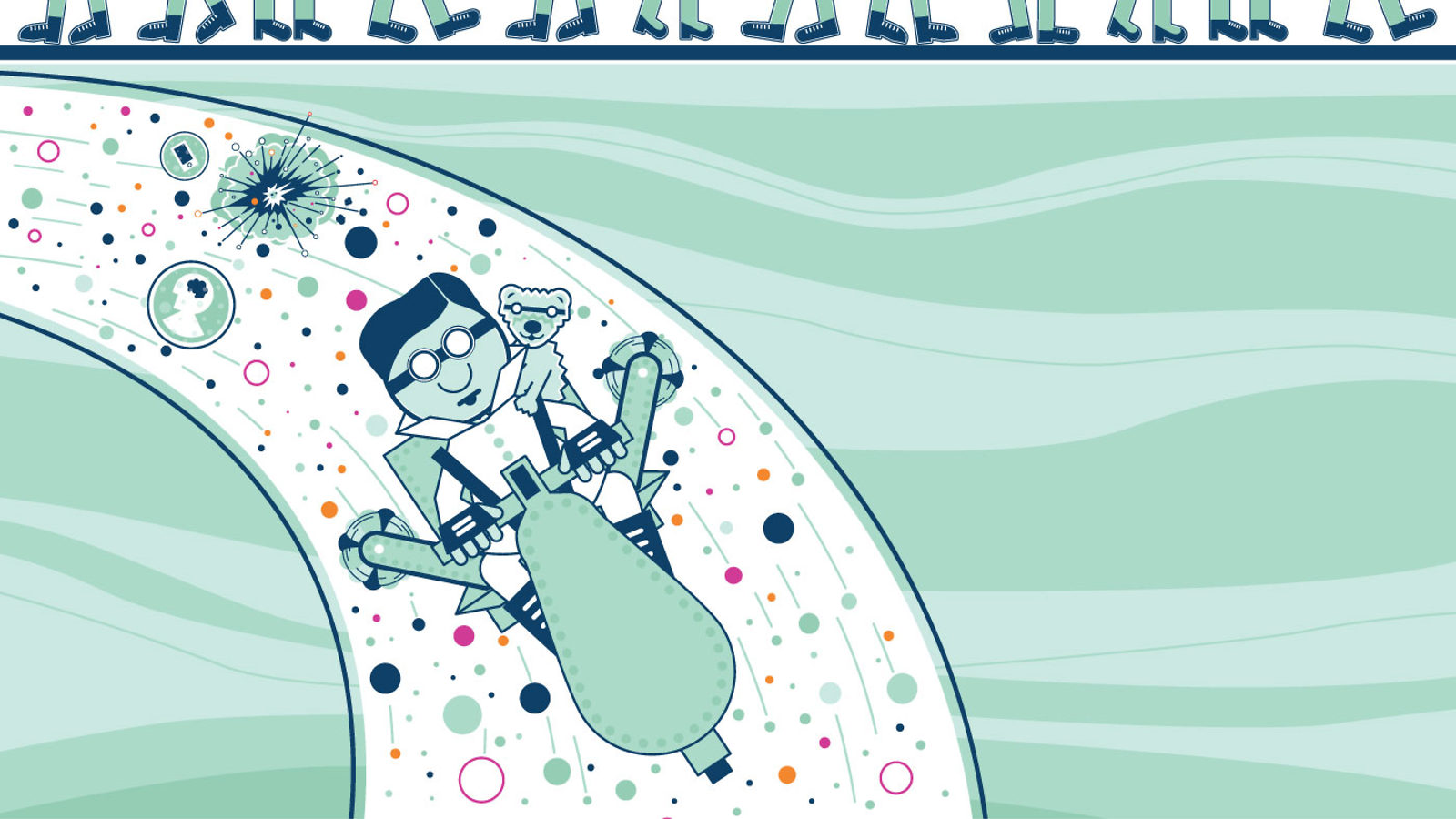 The Large Hadron Collider at CERN laboratory has made its way into popular culture: Comedian Jon Stewart jokes about it on The Daily Show, character Sheldon Cooper dreams about it on The Big Bang Theory and fictional villains steal fictional antimatter from it in Angels & Demons. 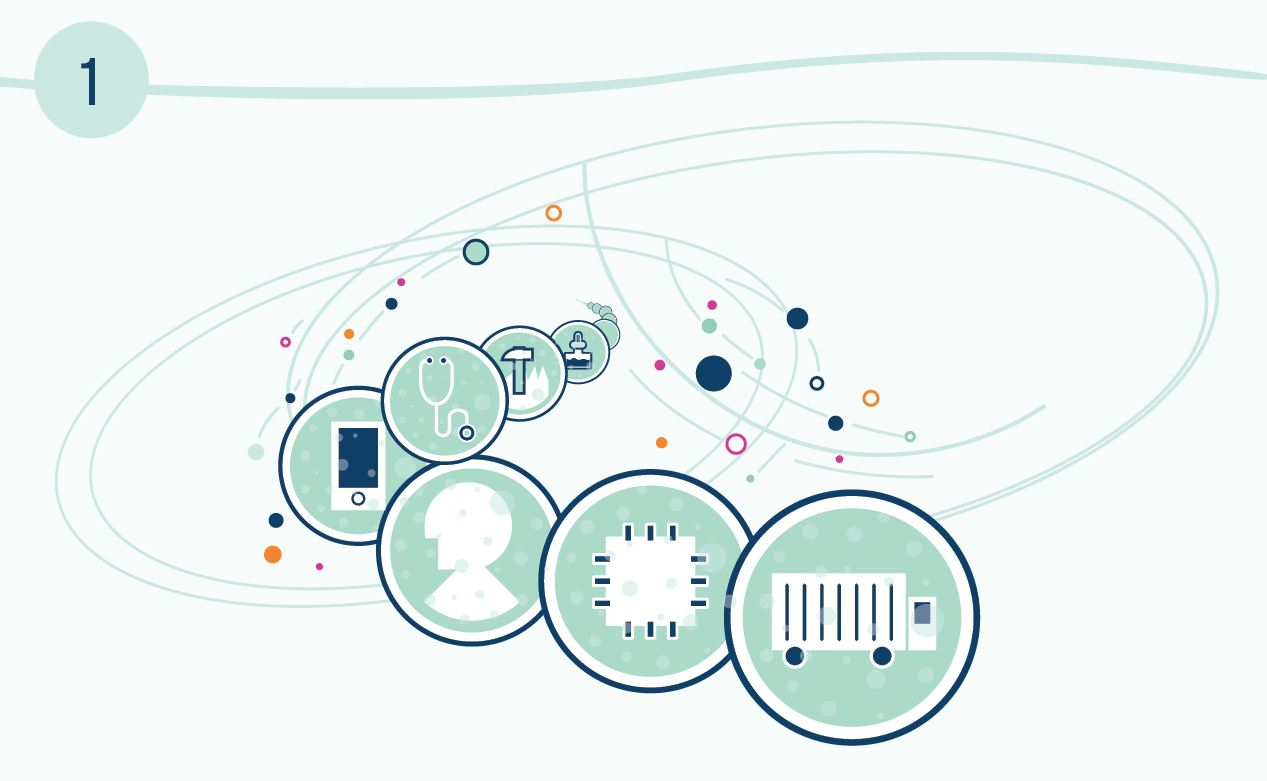 There are more than 30,000 accelerators in operation around the world.

Accelerators are all over the place, doing a variety of jobs. They may be best known for their role in particle physics research, but their other talents include: creating tumor-destroying beams to fight cancer; killing bacteria to prevent food-borne illnesses; developing better materials to produce more effective diapers and shrink wrap; and helping scientists improve fuel injection to make more efficient vehicles. 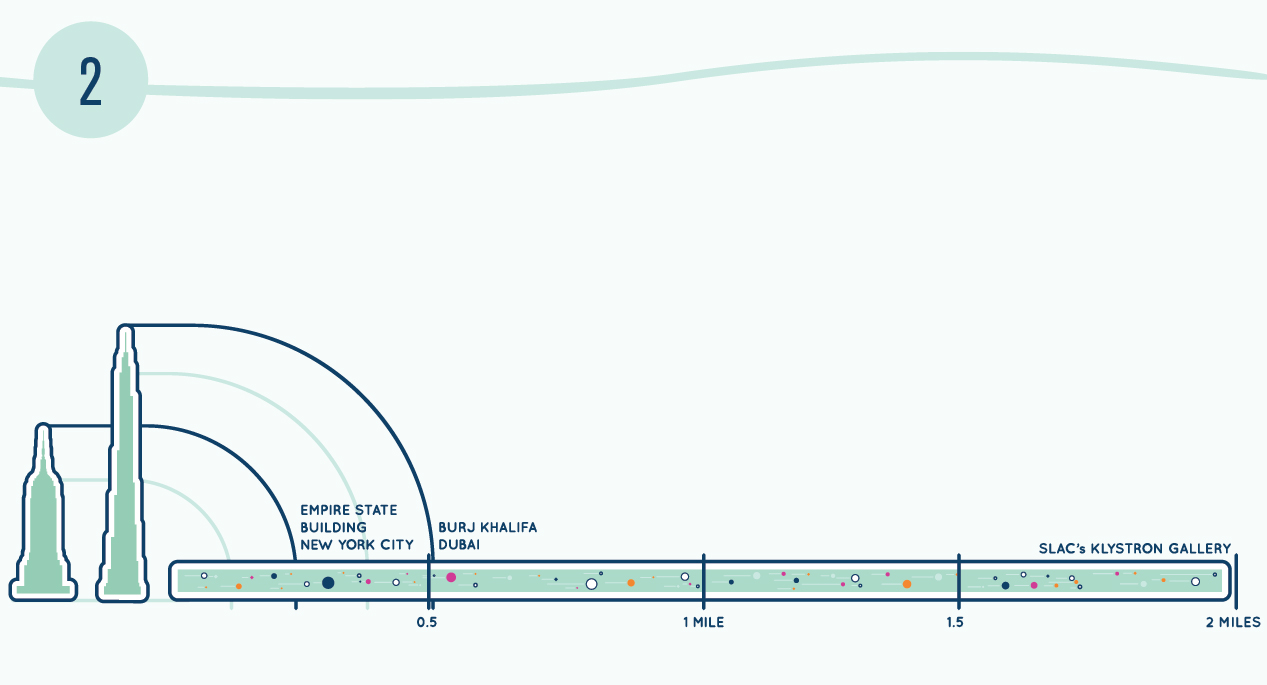 One of the longest modern buildings in the world was built for a particle accelerator.

Linear accelerators, or linacs for short, are designed to hurl a beam of particles in a straight line. In general, the longer the linac, the more powerful the particle punch. The linear accelerator at SLAC National Accelerator Laboratory, near San Francisco, is the largest on the planet.

SLAC’s klystron gallery, a building that houses components that power the accelerator, sits atop the accelerator. It’s one of the world’s longest modern buildings. Overall, it’s a little less than 2 miles long, a feature that prompts laboratory employees to hold an annual footrace around its perimeter. 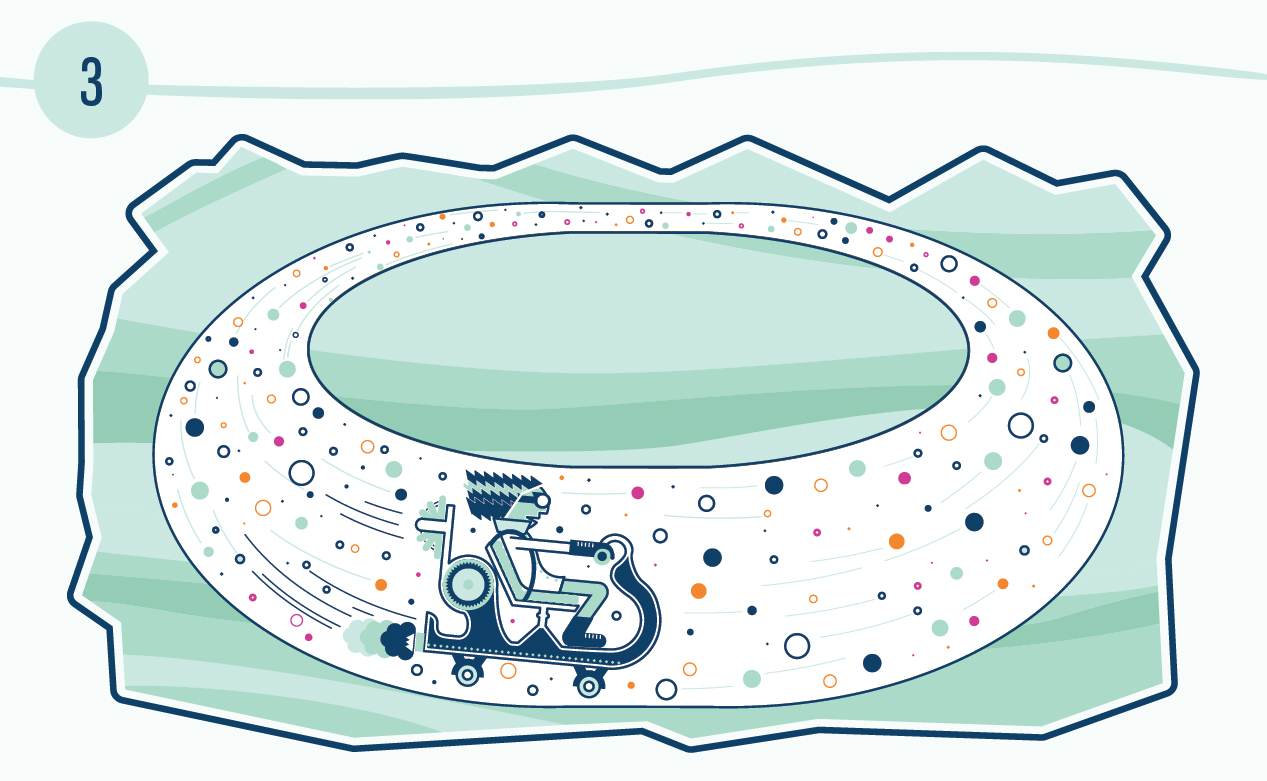 Particle accelerators are the closest things we have to time machines, according to Stephen Hawking.

In 2010, physicist Stephen Hawking wrote an article for the UK paper the Daily Mail explaining how it might be possible to travel through time. We would just need a particle accelerator large enough to accelerate humans the way we accelerate particles, he said.

A person-accelerator with the capabilities of the Large Hadron Collider would move its passengers at close to the speed of light. Because of the effects of special relativity, a period of time that would appear to someone outside the machine to last several years would seem to the accelerating passengers to last only a few days. By the time they stepped off the LHC ride, they would be younger than the rest of us.

Hawking wasn’t actually proposing we try to build such a machine. But he was pointing out a way that time travel already happens today. For example, particles called pi mesons are normally short-lived; they disintegrate after mere millionths of a second. But when they are accelerated to nearly the speed of light, their lifetimes expand dramatically. It seems that these particles are traveling in time, or at least experiencing time more slowly relative to other particles. 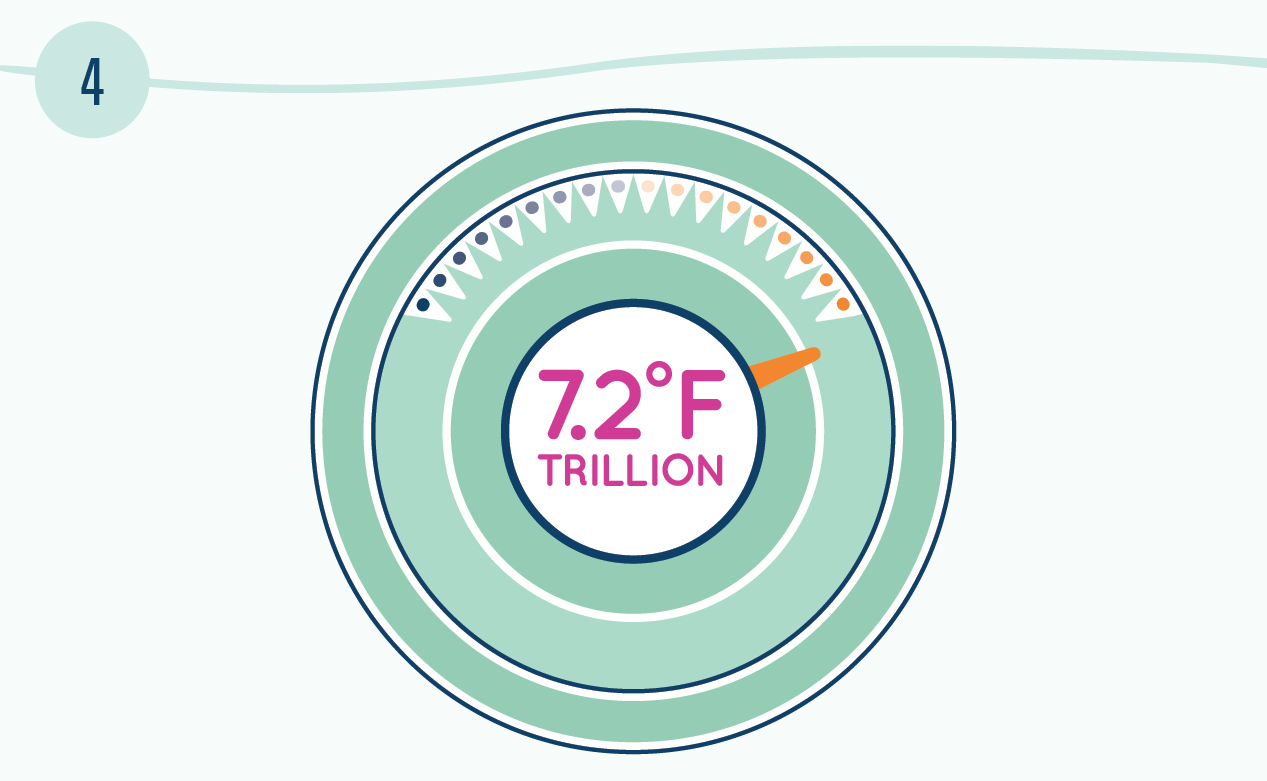 The highest temperature recorded by a manmade device was achieved in a particle accelerator.

In 2012, Brookhaven National Laboratory’s Relativistic Heavy Ion Collider achieved a Guinness World Record for producing the world’s hottest manmade temperature, a blazing 7.2 trillion degrees Fahrenheit. But the Long Island-based lab did more than heat things up. It created a small amount of quark-gluon plasma, a state of matter thought to have dominated the universe’s earliest moments. This plasma is so hot that it causes elementary particles called quarks, which generally exist in nature only bound to other quarks, to break apart from one another.

Scientists at CERN have since also created quark-gluon plasma, at an even higher temperature, in the Large Hadron Collider. 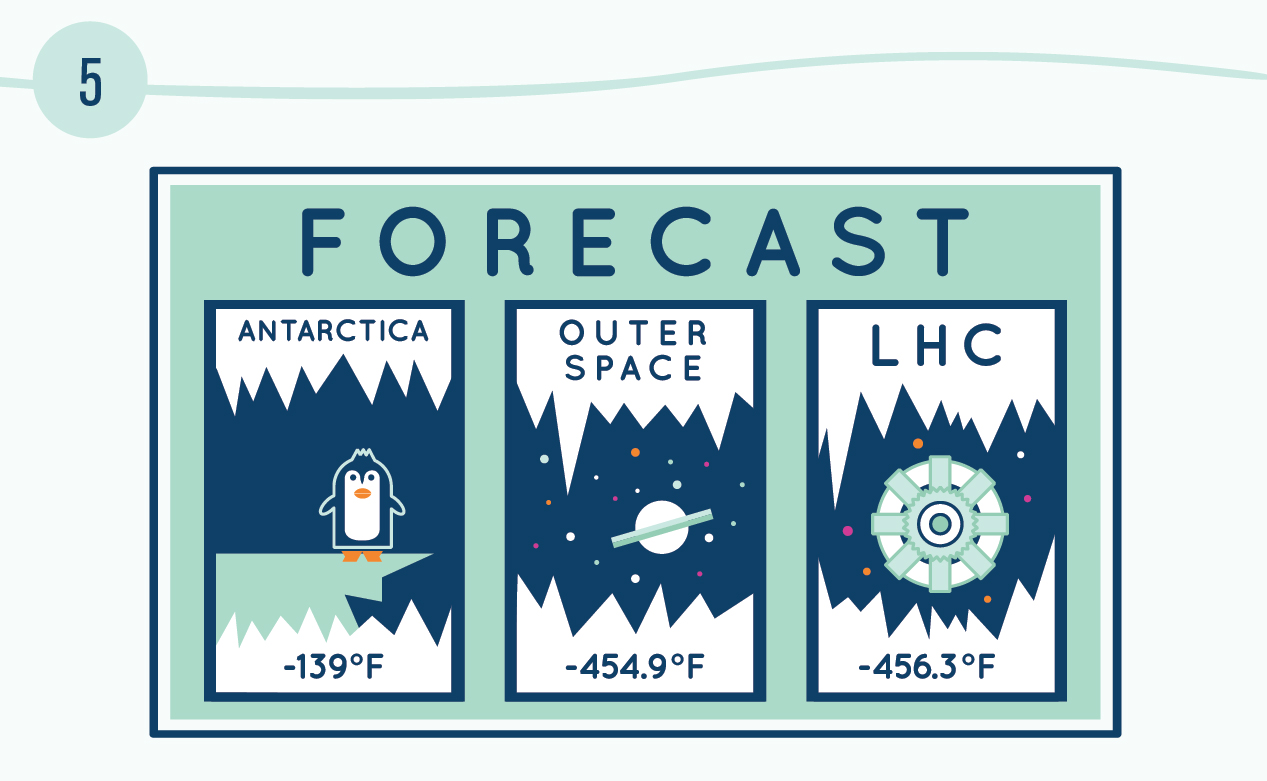 The inside of the Large Hadron Collider is colder than outer space.

In order to conduct electricity without resistance, the Large Hadron Collider’s electromagnets are cooled down to cryogenic temperatures. The LHC is the largest cryogenic system in the world, and it operates at a frosty minus 456.3 degrees Fahrenheit. It is one of the coldest places on Earth, and it’s even a few degrees colder than outer space, which tends to rest at about minus 454.9 degrees Fahrenheit. 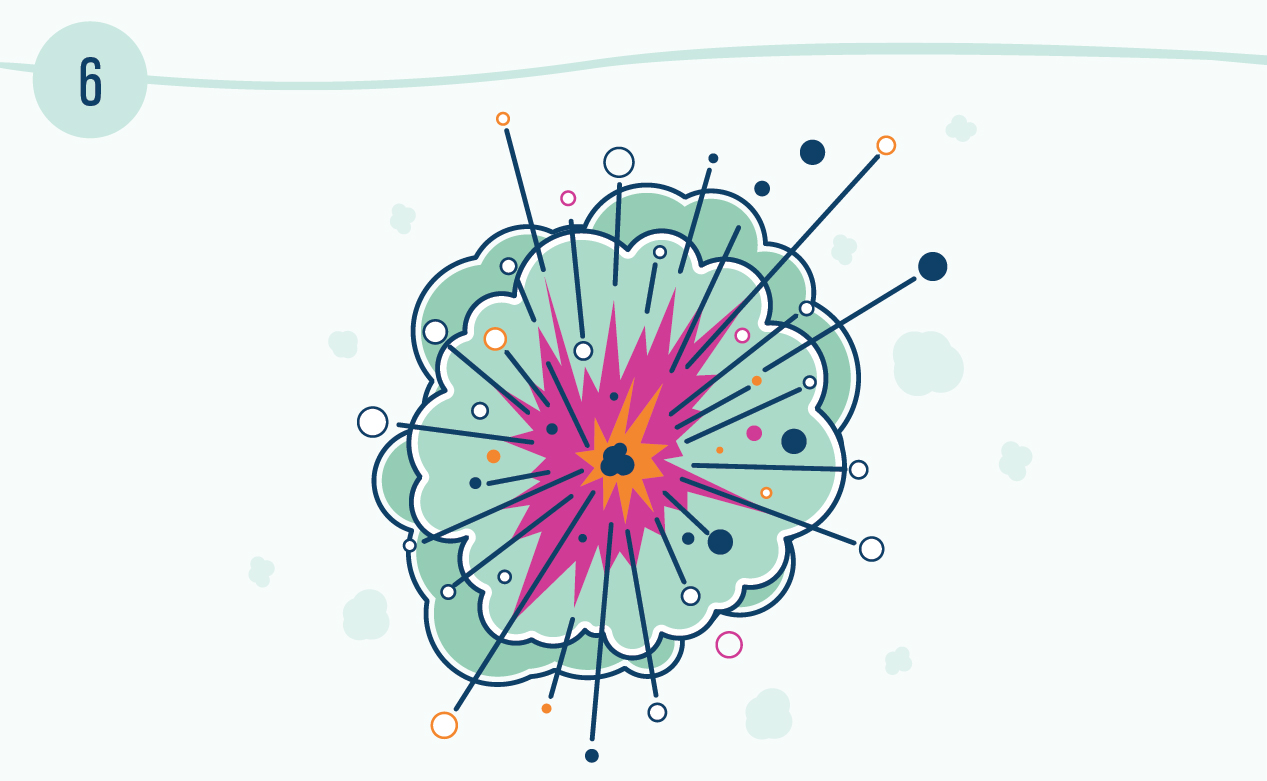 Nature produces particle accelerators much more powerful than anything made on Earth.

The most energetic cosmic ray ever observed was a proton accelerated to an energy of 300 million trillion electronvolts. No known source within our galaxy is powerful enough to have caused such an acceleration. Even the shockwave from the explosion of a star, which can send particles flying much more forcefully than a manmade accelerator, doesn’t quite have enough oomph. Scientists are still investigating the source of such ultra-high-energy cosmic rays. 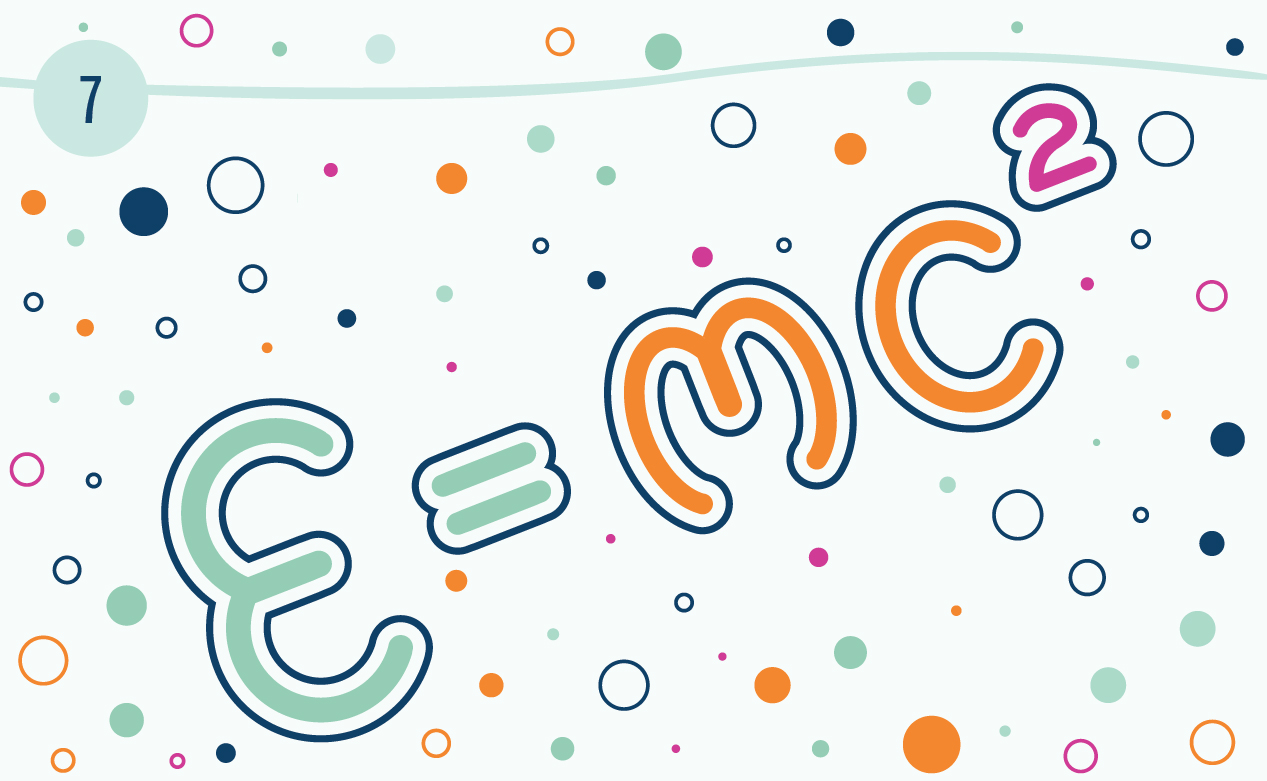 As Einstein predicted in his theory of relativity, no particle that has mass can travel as fast as the speed of light—about 186,000 miles per second. No matter how much energy one adds to an object with mass, its speed cannot reach that limit.

Since, as Einstein told us, an object’s energy is equal to its mass times the speed of light squared (E=mc2), adding energy is, in effect, also increasing the particles’ mass. Said another way: Where there is more “E,” there must be more “m.” As an object with mass approaches, but never reaches, the speed of light, its effective mass gets larger and larger. 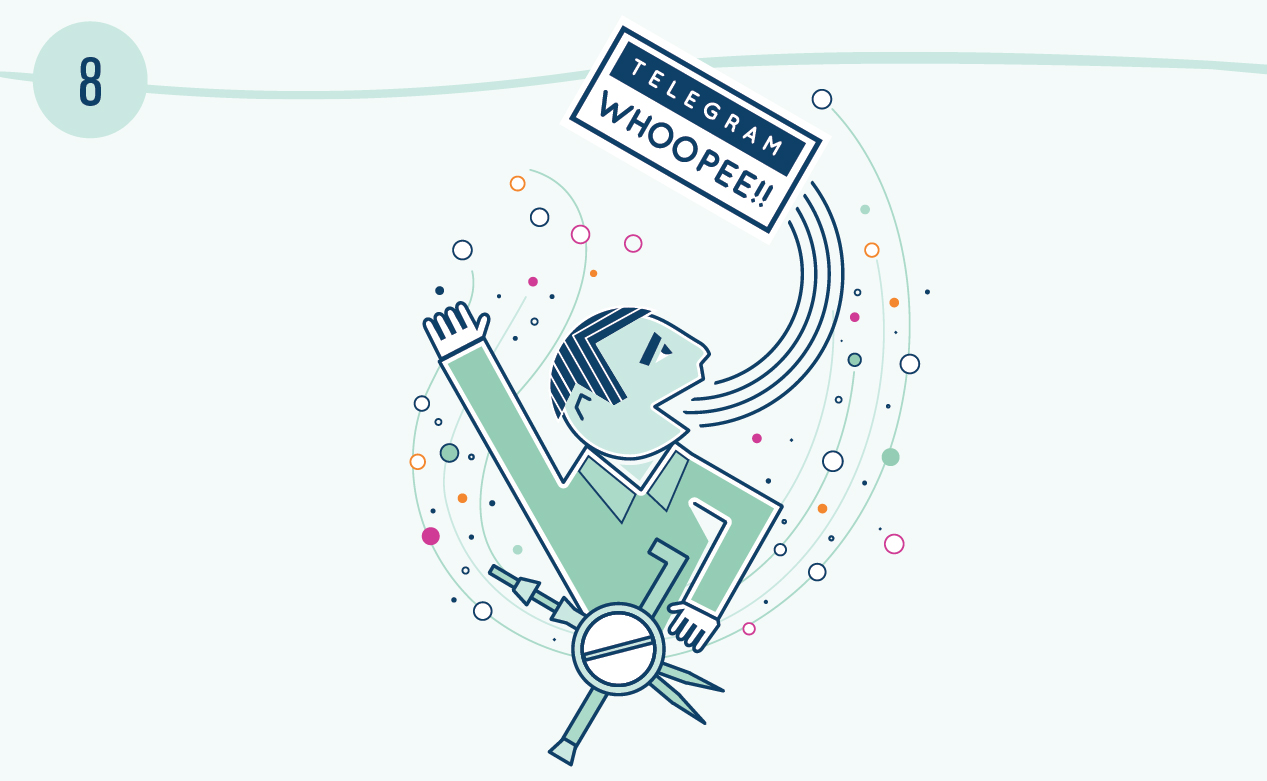 In 1930, inspired by the ideas of Norwegian engineer Rolf Widerøe, 27-year-old physicist Ernest Lawrence created the first circular particle accelerator at the University of California, Berkeley, with graduate student M. Stanley Livingston. It accelerated hydrogen ions up to energies of 80,000 electronvolts within a chamber less than 5 inches across.

In 1931, Lawrence and Livingston set to work on an 11-inch accelerator. The machine managed to accelerate protons to just over 1 million electronvolts, a fact that Livingston reported to Lawrence by telegram with the added comment, “Whoopee!” Lawrence went on to build even larger accelerators—and to found Lawrence Berkeley and Lawrence Livermore laboratories.

Particle accelerators have come a long way since then, creating brighter beams of particles with greater energies than previously imagined possible. The Large Hadron Collider at CERN is more than 5 miles in diameter (17 miles in circumference). After this year’s upgrades, the LHC will be able to accelerate protons to 6.5 trillion electronvolts. 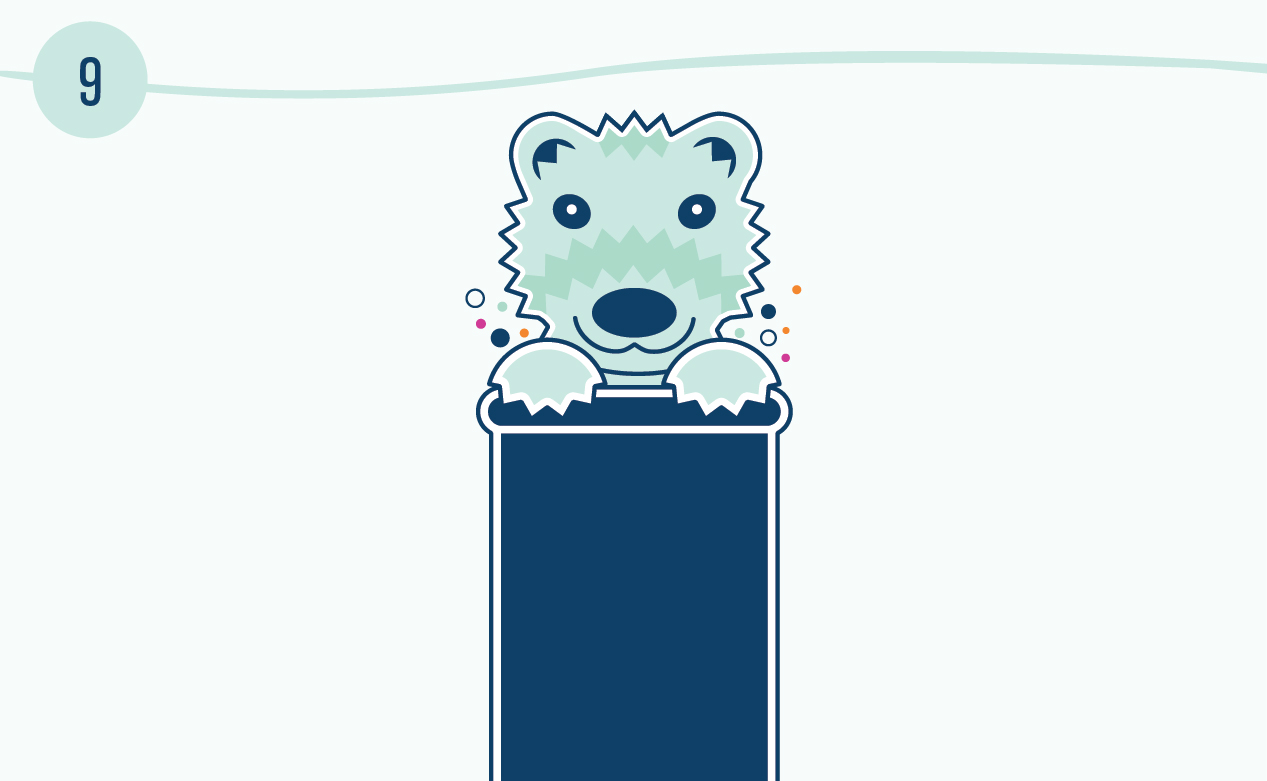 From 1971 until 1999, Fermilab’s Meson Laboratory was a key part of high-energy physics experiments at the laboratory. To learn more about the forces that hold our universe together, scientists there studied subatomic particles called mesons and protons. Operators would send beams of particles from an accelerator to the Meson Lab via a miles-long underground beam line.

To ensure hundreds of feet of vacuum piping were clear of debris before connecting them and turning on the particle beam, the laboratory enlisted the help of one Felicia the ferret.

Ferrets have an affinity for burrowing and clambering through holes, making them the perfect species for this job. Felicia’s task was to pull a rag dipped in cleaning solution on a string through long sections of pipe.

Although Felicia’s work was eventually taken over by a specially designed robot, she played a unique and vital role in the construction process—and in return asked only for a steady diet of chicken livers, fish heads and hamburger meat. 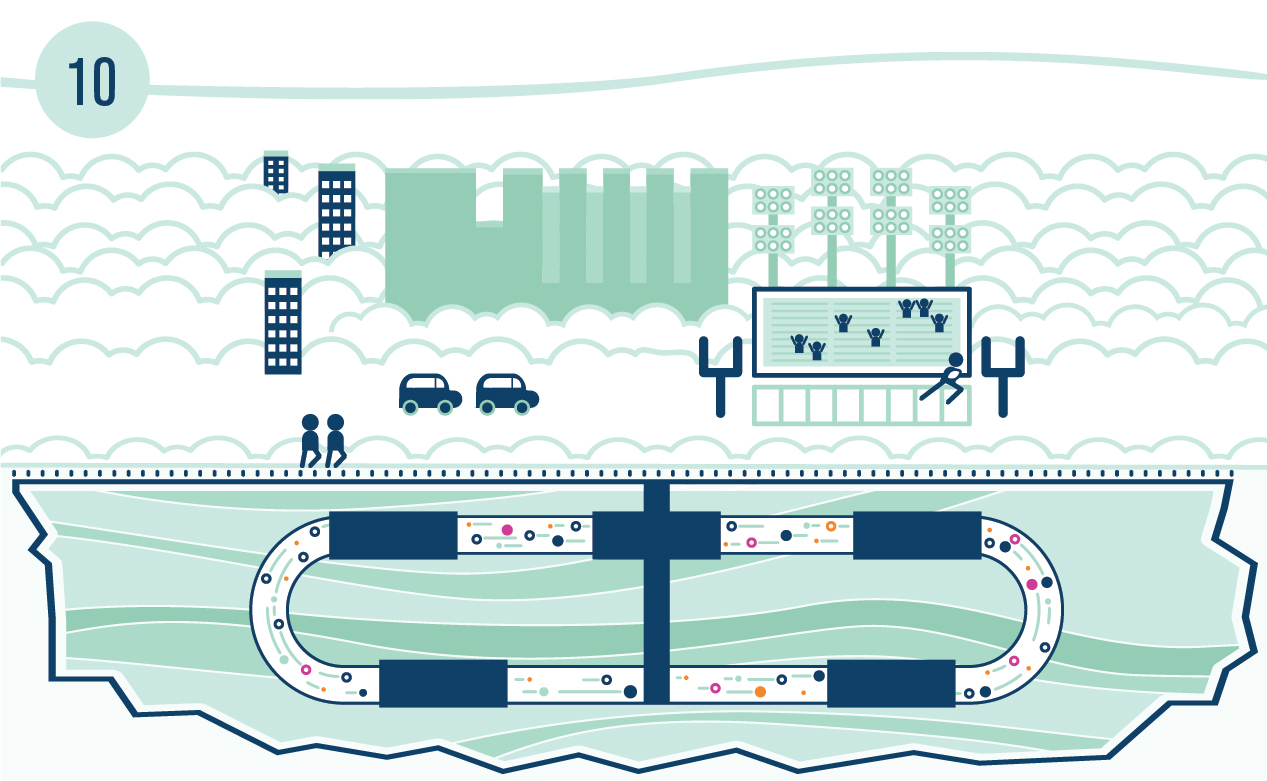 Scientists tend to construct large particle accelerators underground. This protects them from being bumped and destabilized, but can also make them a little harder to find.

For example, motorists driving down Interstate 280 in northern California may not notice it, but the main accelerator at SLAC National Accelerator Laboratory runs underground just beneath their wheels.

Residents in villages in the Swiss-French countryside live atop the highest-energy particle collider in the world, the Large Hadron Collider.

And for decades, teams at Cornell University have played soccer, football and lacrosse on Robison Alumni Fields 40 feet above the Cornell Electron Storage Ring, or CESR. Scientists use the circular particle accelerator to study compact particle beams and to produce X-ray light for experiments in biology, materials science and physics.