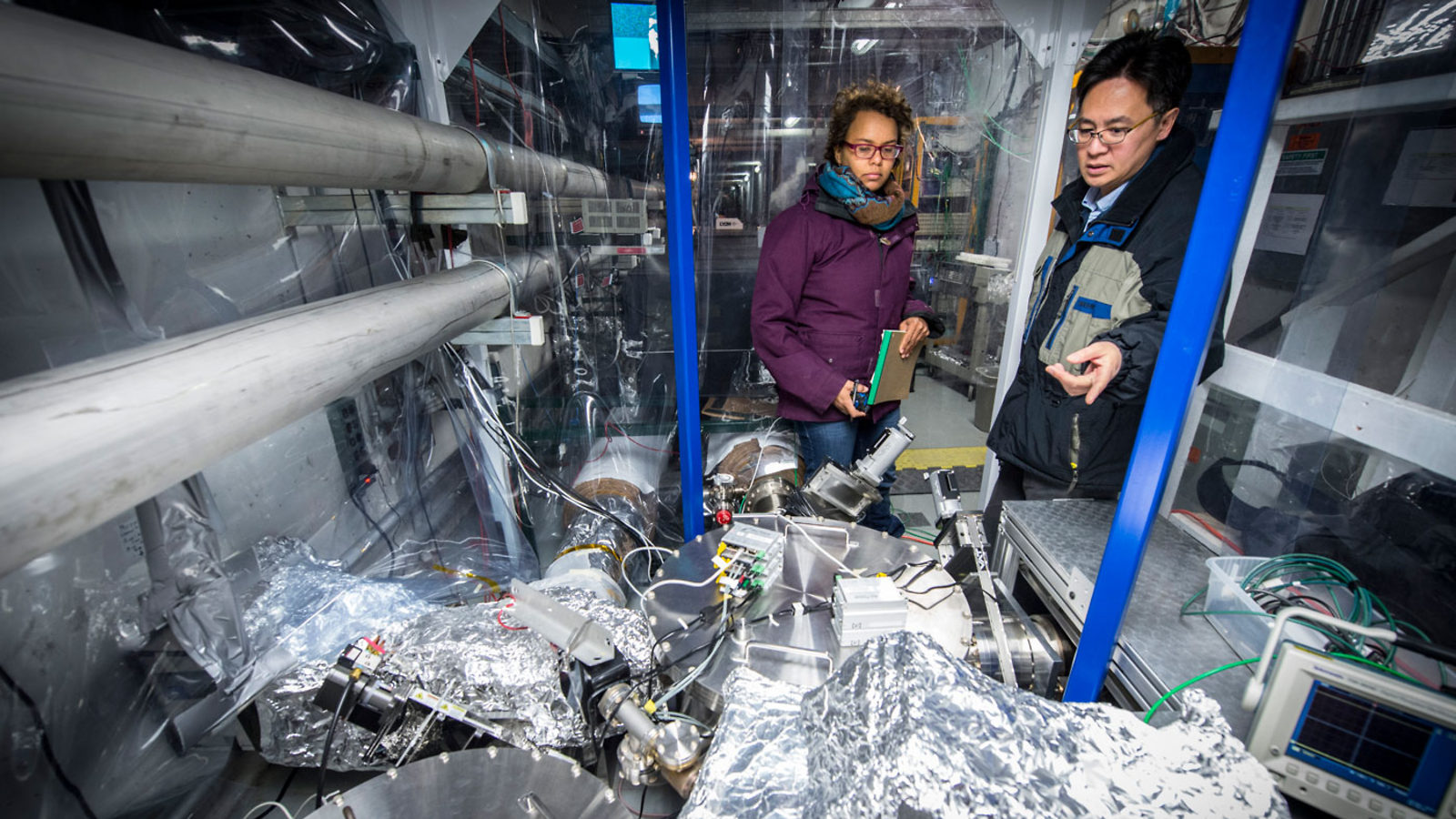 The beauty of the small operation—the mom-and-pop restaurant or the do-it-yourself home repair—is that pragmatism begets creativity. The industrious individual who makes do with limited resources is compelled onto paths of ingenuity, inventing rather than following rules to address the project’s peculiarities.

As project manager for the Holometer experiment at Fermilab, physicist Aaron Chou runs a show that, though grandiose in goal, is remarkably humble in setup. Operated out of a trailer by a small team with a small budget, it has the feel more of a scrappy startup than of an undertaking that could make humanity completely rethink our universe.

The experiment is based on the proposition that our familiar, three-dimensional universe is a manifestation of a two-dimensional, digitized space-time. In other words, all that we see around us is no more than a hologram of a more fundamental, lower-dimensional reality.

If this were the case, then space-time would not be smooth; instead, if you zoomed in on it far enough, you would begin to see the smallest quantum bits—much as a digital photo eventually reveals its fundamental pixels.

In 2009, the GEO600 experiment, which searches for gravitational waves emanating from black holes, was plagued by unaccountable noise. This noise could, in theory, be a telltale sign of the universe’s smallest quantum bits. The Holometer experiment seeks to measure space-time with far more precision than any experiment before—and potentially observe effects from those fundamental bits.

Such an endeavor is thrilling—but also risky. Discovery would change the most basic assumptions we make about the universe. But there also might not be any holographic noise to find. So for Chou, managing the Holometer means building and operating the apparatus on the cheap—not shoddily, but with utmost economy.

Thus Chou and his team take every opportunity to make rather than purchase, to pick up rather than wait for delivery, to seize the opportunity and take that measurement when all the right people are available.

“It’s kind of like solving a Rubik’s cube,” Chou says. “You have an overview of every aspect of the measurement that you’re trying to make. You have to be able to tell the instant something doesn’t look right, and tell that it conflicts with some other assumption you had. And the instant you have a conflict, you have to figure out a way to resolve it. It’s a lot of fun.”

Chou is one of the experiment’s 1.5 full-time staff members; a complement of students rounds out a team of 10. Although Chou is essentially the overseer, he runs the experiment from down in the trenches. 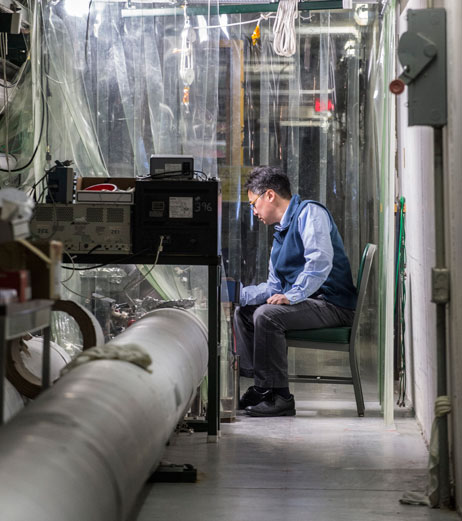 The Holometer experimental area, for example, is a couple of aboveground, dirt-covered tunnels whose walls don’t altogether keep out the water after a heavy rain. So any time the area needs the attention of a wet-dry vacuum, he and his team are down on the ground, cheerfully squeegeeing, mopping and vacuuming away.

“That’s why I wear such shabby clothes,” he says. “This is not the type of experiment where you sit behind the computer and analyze data or control things remotely all day long. It’s really crawling-around-on-the-floor kind of work, which I actually find to be kind of a relief, because I spent more than a decade sitting in front of a computer for more well-established experiments where the installation took 10 years and most of the resulting experiment is done from behind a keyboard.”

As a graduate student at Stanford University, Chou worked on the SLD experiment at SLAC National Accelerator Laboratory, writing software to help look for parity violation in Z bosons. As a Fermilab postdoc on the Pierre Auger experiment, he analyzed data on ultra-high-energy cosmic rays.

Now Chou and his team are down in the dirt, hunting for the universe’s quantum bits. In length terms, these bits are expected to be on the smallest scale of the universe, the Planck scale: 1.6 x 10-35 meters. That’s roughly 10 trillion trillion times smaller than an atom; no existing instrument can directly probe objects that small. If humanity could build a particle collider the size of the Milky Way, we might be able to investigate Planck-scale bits directly.

The Holometer instead will look for a jitter arising from the cosmos’ minuscule quanta. In the experiment’s dimly lit tunnels, the team built two interferometers, L-shaped configurations of tubes. Beginning at the L’s vertex, a laser beam travels down each of the L’s 40-meter arms simultaneously, bounces off the mirrors at the ends and recombines at the starting point. Since the laser beam’s paths down each arm of the L are the same length, absent a holographic jitter, the beam should cancel itself out as it recombines. If it doesn’t, it could be evidence of the jitter, a disruption in the laser beam’s flight.

And why are there two interferometers? The two beam spots’ particular brightening and dimming will match if it’s the looked-for signal.

“Real signals have to be in sync,” Chou says. “Random fluctuations won’t be heard by both instruments.”

Should the humble Holometer find a jitter when it looks for the signal—researchers will soon begin the initial search and expect results by 2015—the reward to physics would be extraordinarily high, especially given the scrimping behind the experiment and the fact that no one had to build an impossibly high-energy, Milky Way-sized collider. The data would support the idea that the universe we see around us is only a hologram. It would also help bring together the two thus-far-irreconcilable principles of quantum mechanics and relativity.

What’s more, when the Holometer is up and running, it will be able to look for other phenomena that manifest themselves in the form of high-frequency gravitational waves, including topological defects in our cosmos—areas of tension between large regions in space-time that were formed by the big bang.

“Whenever you design a new apparatus, what you’re doing is building something that’s more sensitive to some aspect of nature than anything that has ever been built before,” Chou says. “We may discover evidence of holographic jitter. But even if we don’t, if we’re smart about how we use our newly built apparatus, we may still be able to discover new aspects of our universe.”