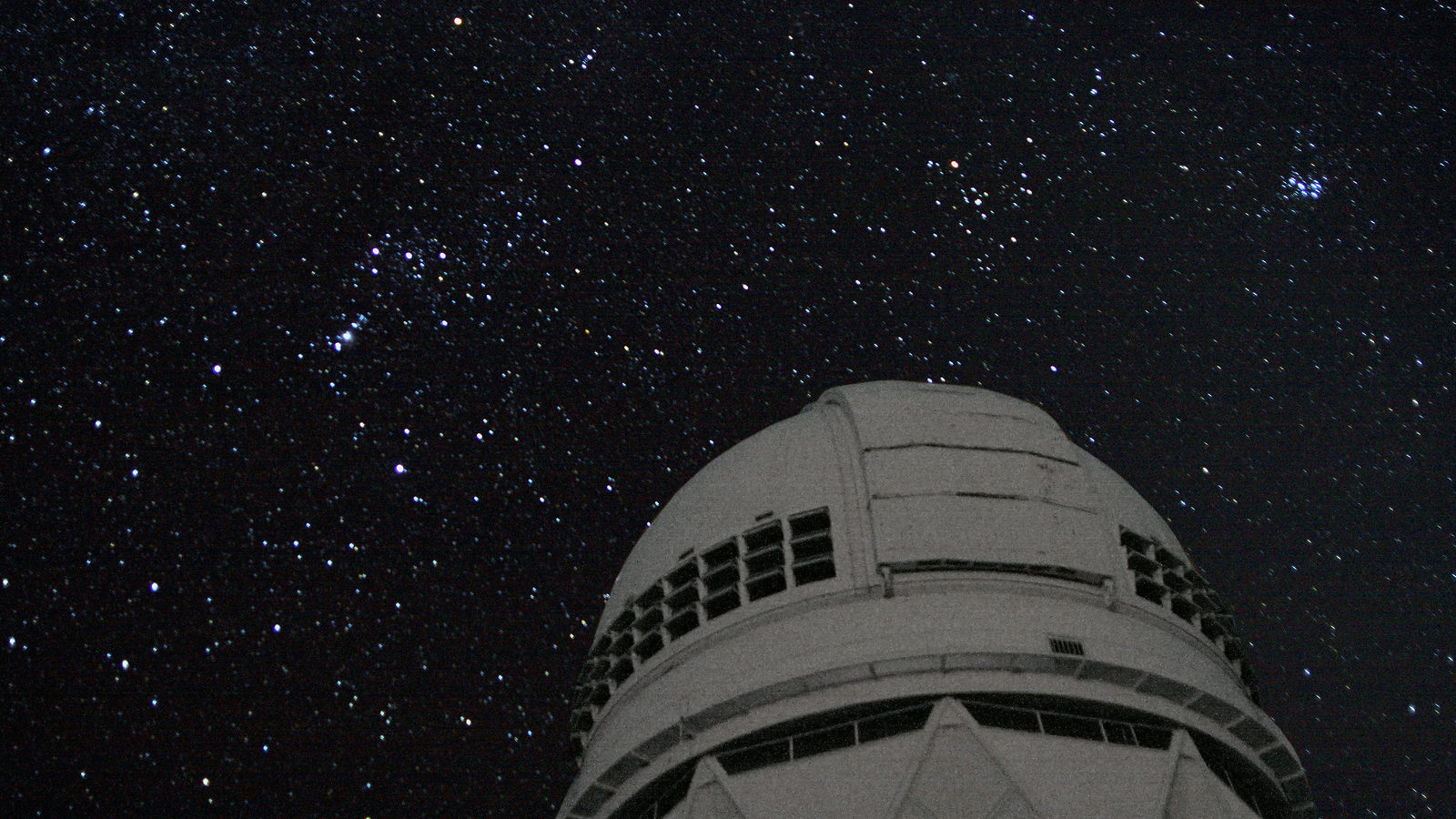 Maps do more than tell us where we are. Rich with information elegantly arranged, they give us a way to assimilate our vast world. The clearer the map, the more confidently we set out to explore, looking for something it doesn’t show.

In a few years, scientists will come out with a new map of a third of the sky, one that will go deeper and bring that depth into sharper focus than any survey has yet achieved. It will pinpoint in three dimensions the locations of 25 million galaxies and quasars, pulling back the curtains on the history of the universe’s expansion over more than half of the age of the universe.

Armed with this detailed picture, scientists will be better equipped to search for something the map can’t show but whose effects will likely be all over it—dark energy. The researchers’ cartographic tool will be the Dark Energy Spectroscopic Instrument, or DESI.

“We have very precise measurements of positions and shapes of galaxies and galaxy clusters in the lateral dimensions, but the resolution in the distance away from us is much worse,” says Fermilab’s Brenna Flaugher, one of the leading scientists on DESI. “With DESI, you get the really fine measurements in depth. Your map of the universe suddenly gets clearer.”

The DESI project, managed at Lawrence Berkeley National Laboratory, is one of a number of surveys looking to get a handle on how dark energy operates.

“We’re going to try to understand what dark energy is,” says Berkeley Lab’s Michael Levi, DESI project director. “We don’t know if it’s something having to do with gravity that we don’t understand or some new form of energy that we just haven’t gotten our heads around yet.”

Whatever it is, it leaves its trace in the growth and structure of the universe.

DESI will model the universe’s expansion using two approaches. One is to precisely measure the spectra of the light coming from galaxies to determine their distance from us. The redder the light is, the farther away the galaxy.

The other approach is to measure the distances between galaxies. Galaxies arose from areas left dense with matter when the universe cooled down from the rapid expansion of the big bang. These peaks in density are known as baryon acoustic oscillations. Back when the peaks formed, they corresponded to a separation of about 490 million light-years. Since then the expansion of the universe has stretched them apart. Comparing the standard ruler against the distances between galaxies as the universe developed to its current state, scientists will be able to measure how space has stretched since the early times.

Together, the measurements will tell scientists how and how fast the universe is growing.

“Being able to make those two measurements at the same time—one about the expansion rate of the universe and the other about how structure is growing—allows you to test the theory of general relativity on this huge length and time scale,” says SLAC National Accelerator Laboratory’s Risa Wechsler, DESI co-spokesperson.

DESI will be the first survey to make measurements accurate to less than 1 percent of the expansion rate of the universe over the last 11 billion years.

The Dark Energy Spectrographic Instrument is designed to attach to the Mayall 4-Meter Telescope (pictured above) in Arizona. Once construction is completed, it will have 5000 fibers for collecting the spectra of galaxy light.

Using data from the Dark Energy Camera in Chile, which is currently focused on taking imaging data for the Dark Energy Survey, DESI will point each of those 5000 fibers at a galaxy. Once the fibers get what they need, they will move on to the next set of 5000 celestial objects.

“It’s like a big pincushion that wiggles at every image,” Flaugher says. “Every 20 minutes you take an image, and then you reposition each of these little fibers onto new targets.” It will keep doing that until it hits 25 million galaxies.

DESI grew out of two separate proposals to develop a spectroscopic instrument to explore dark energy. The DESI collaboration is made of 180 scientists from 45 institutions around the world, including five DOE laboratories.

Scientists expect to finish DESI’s construction in 2018. The experiment will then run for five years.

“The other cosmic surveys that are going on now and over the next 10 years—the Dark Energy Survey, LSST—are spectacular, and they’ll take images of a lot more galaxies than DESI will measure, but they’re making a 2- or 2.5-dimensional measurement of the universe,” Wechsler says.

“DESI is really making a 3-D map. You get a lot of additional power because you can say what the universe looks like in three dimensions over this long history.”