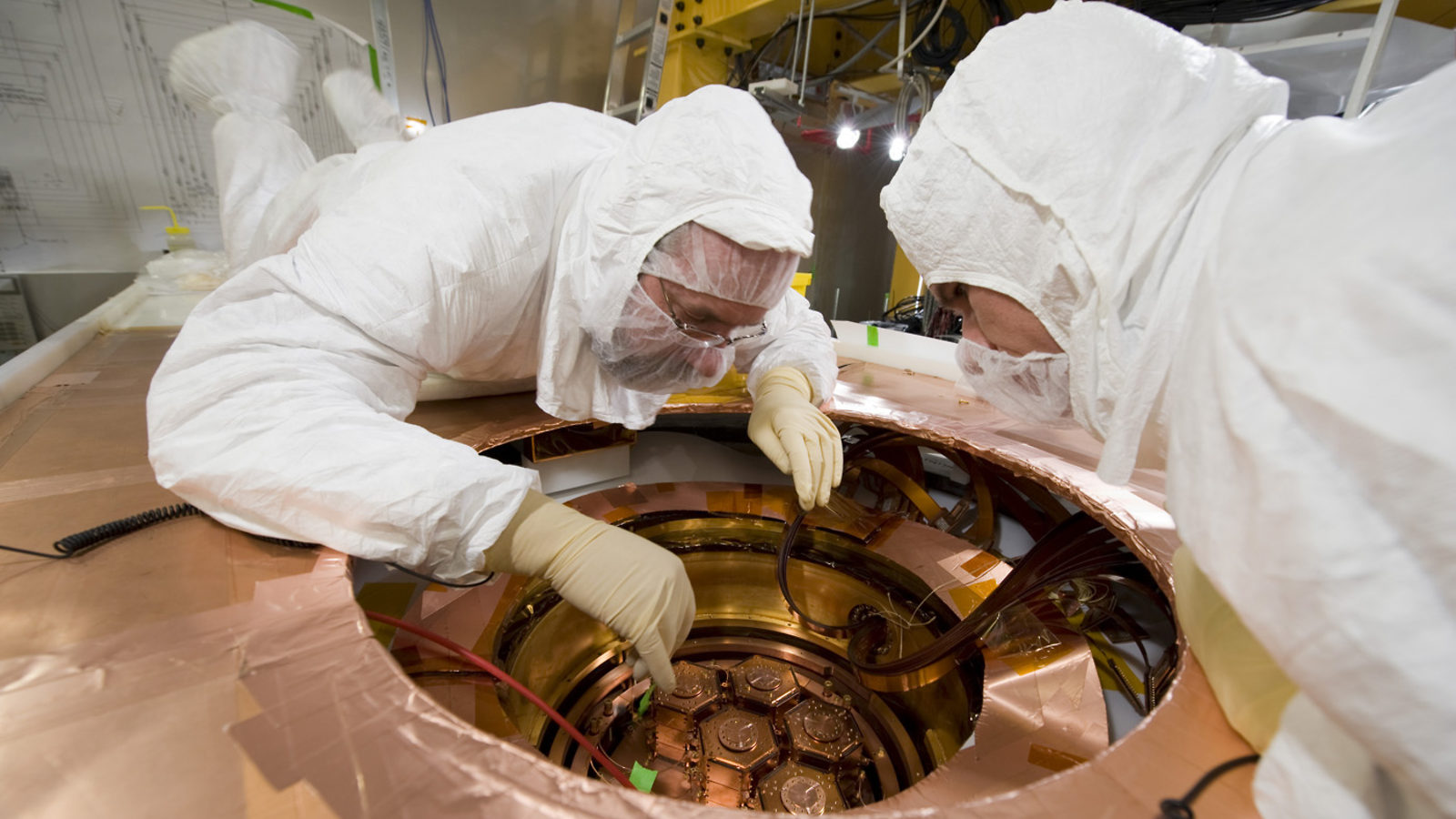 Physicists operating an experiment located half a mile underground in Minnesota reported this weekend that they have found possible hints of dark-matter particles.

“There’s a limited amount one can really say from just three events,” McCarthy says. “But it certainly warrants some further investigation.”

A statistical fluctuation of the experimental background is likely to produce three or more events resembling this result a little over 5 percent of the time. However, all three of these events have energies more like those expected of a low-mass dark-matter particle, something that should happen by chance only 0.19 percent of the time. This consideration brings the result to a higher confidence level, around 3 sigma.

These odds might give one a reason to feel optimistic, but they do not pass the criterion physicists use to claim a discovery, so CDMS scientists say they’re staying reserved until they’ve conducted more analysis. CDMS results from 2010 included two potential dark-matter particles in a higher mass range, but physicists ruled out those candidates with further study.

The latest result does bring new intrigue to the hunt for dark matter. The best fit with the result would be a dark-matter particle with a mass of 8.6 GeV. This seems to align with some interpretations of recent results from the CoGeNT dark matter experiment and from the Fermi Gamma-Ray Space Telescope. But the CDMS result contradicts indications from the experiment currently leading the field, the XENON experiment.

“There’s been an interesting back-and-forth between experiments,” says CDMS Spokesperson Blas Cabrera of Stanford University and SLAC National Accelerator Laboratory. To investigate this hint, “we’ll certainly need more data. If a signal persists, it will need to be replicated by other experiments with different technologies before it is accepted by the community.”

CDMS collaboration members expect to shed more light on the result themselves later this year with new data they are taking using detectors of a different material, germanium as opposed to silicon.

The CDMS experiment—funded by the Department of Energy, the National Science Foundation, the Natural Sciences and Engineering Research Council of Canada and the MultiDark project of Spain—is designed to directly detect dark-matter particles. If a dark-matter particle passed through, it could knock against the nucleus of an atom in the detector, releasing a small amount of energy as charge and heat. Scientists keep the detector cold and shielded from cosmic rays underground in order to best watch for such a signal. They study interactions of non-dark-matter particles to rule out background noise.

CDMS scientists were surprised this result came from its lighter silicon detectors and not its heavier germanium detectors. When they designed their experiment in the early 2000s, they included the silicon ones only to verify results from the germanium.

Scientists expected they would need the bulkier detectors to register the nuclear recoil from massive dark-matter particles predicted to weigh about 100 times the mass of a proton. However, in the past couple of years, new theories and experimental results have attracted physicists’ attention to the idea of low-mass dark-matter particles—only about 10 times as massive as a proton.

The idea for a high-mass dark-matter particle comes mainly from the theory of supersymmetry, which posits that each of the particles we know has a more massive partner particle. The idea of a low-mass dark-matter particle comes mainly from a theory that has only recently begun to gain currency, that of a “dark sector” made up of many types of dark particles and forces.

“If there is a dark sector, it could be just as complex as the ordinary matter sector,” says CDMS physicist Bernard Sadoulet of Lawrence Berkeley National Laboratory and the University of California, Berkeley.

Finding low-mass dark-matter particles would not rule out the theory of supersymmetry, but “it’s hard to reconcile it with at least the most vanilla flavors of of the theory,” says CDMS Project Manager Dan Bauer of Fermilab.

The year 2013 should be an interesting one in the search for dark matter.