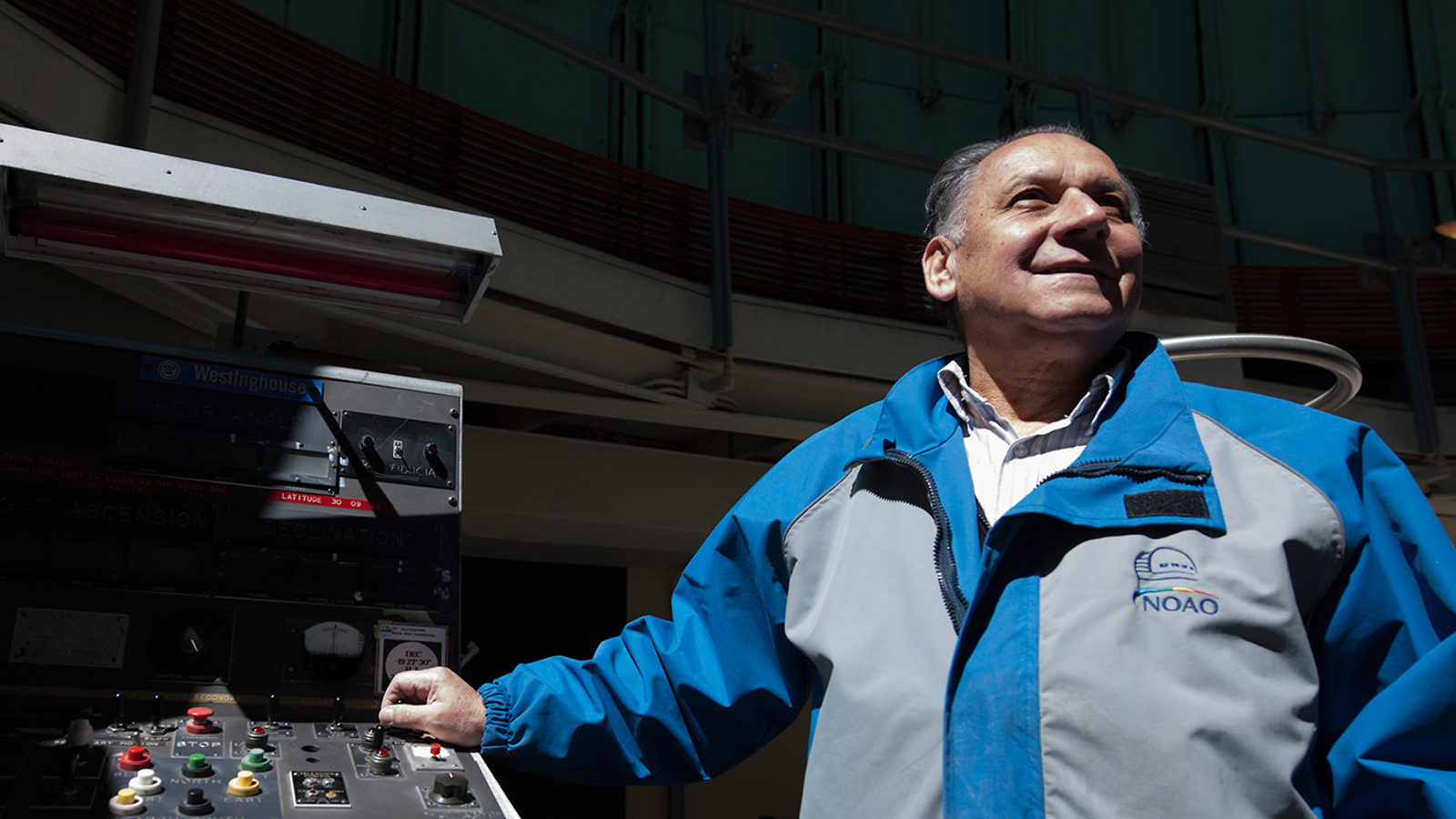 Ascending the mountain road to Cerro Tololo Inter-American Observatory at sunrise can reveal the destructive power of light.

The dry landscape, 2200 meters above sea level, looks as if it has been left in the sun for too long. Long-armed cacti, squat scrub brush and hay-colored tufts of grass take root among brittle rocks in shades of gray, red and purple. At intervals, the winding path pitches vehicles at just the right angle to flood their windshields with sunshine, blocking drivers’ views with a panel of glaring white.

Arturo Gomez, leader of the observer support group at CTIO—home to the Dark Energy Camera—has spent the last 43 years protecting a collection of giant telescopes from the sun and other distractions to help astronomers record the much fainter light from distant stars and galaxies.

“For me this is a beautiful, special, fantastic job,” Gomez says. “I saw the evolution of the technology,” from developing photographic plates by hand to taking digital images and operating machinery by computer—sometimes from across the ocean.

Gomez had been studying to become a teacher of physics and mathematics when, in his early 20s, he saw on television a notification about job openings at the observatory. Now he spends every other week there, taking the overnight bus from his home six hours away in Santiago. He shifts to a nocturnal schedule, sleeping during the day in mountaintop lodging and eating his work lunches at midnight. In the winter, when nights stretch the longest, he works about 12 hours per day. In the summer, he works about eight.

A typical day for Gomez begins at about 2 p.m., when he reviews notes left by the astronomers who used the telescopes overnight. He figures out what fixes and adjustments need to be made, and he and a few dozen colleagues get to work.

The telescopes require absolute stillness to peer deep into the universe. The most advanced ones can be sensitive to the light of a single photon emitted by a faraway star. But the heat generated by a single person can blur a telescope’s vision. “Our temperature moves the air, and we make some turbulence,” Gomez says.

Scientists protect the telescopes from these disruptions by shielding them under white or metallic domes that reflect light and heat during the day. During the night, astronomers work in operating rooms separated from the instruments, which can be kept cool with liquid nitrogen. Once the sun goes down, astronomers crack the roofs of the domes and expose the telescopes to the stars.

Astronomers from the Americas, Europe and Asia share time on the different telescopes, which means a tide of scientists new to the instruments arrive at CTIO on a regular basis. Gomez is the one who hands them the keys and teaches them to drive.

“In the beginning, you know nothing,” Gomez says. “There are hundreds of buttons, like a NASA shuttle. You say [to the newly arrived astronomer], ‘Okay, you will be the pilot in the next days.’”

The hours can be long, and Gomez has spent many nights away from his family, but he says he has no regrets about his life among the telescopes.

“It’s very dynamic,” Gomez says. “The technology always changes. You can talk with many people from all over the world. I never get tired of working here.”

If the video does not include captions, open it in YouTube and click the small "CC" box on bottom right to choose caption language.