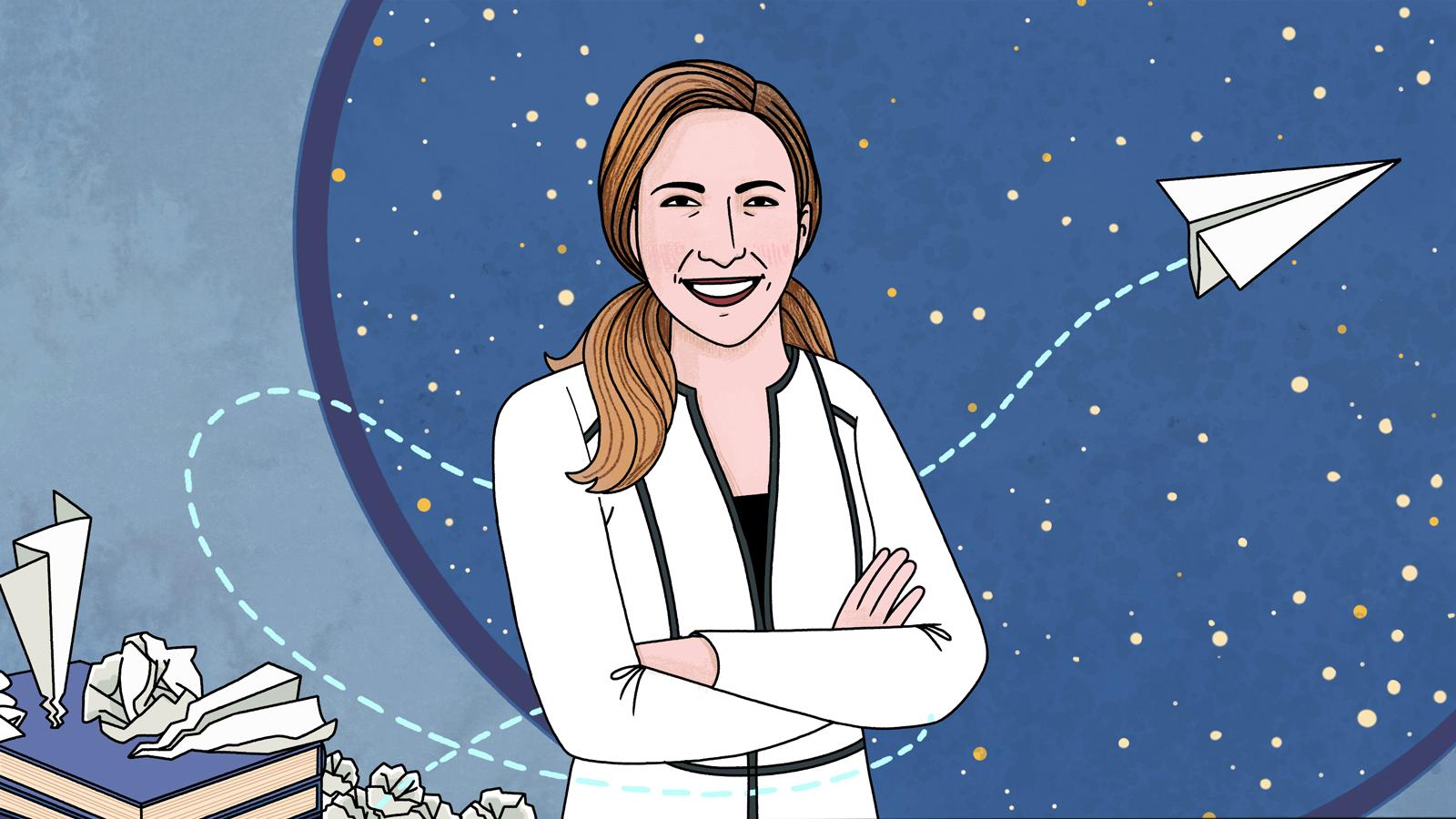 Throughout her life, Cameo Lance’s unique combination of spunk and “Why not?” attitude have landed her opportunities around the world. A dark-matter research experience in Italy. An acting role in a play in Germany. And most recently, a leadership position at an astrophysics start-up.

Lance hasn’t always gotten what she wanted—including a PhD in particle physics—but her willingness to change course has taught her that there’s more than one way to have a career in STEM. 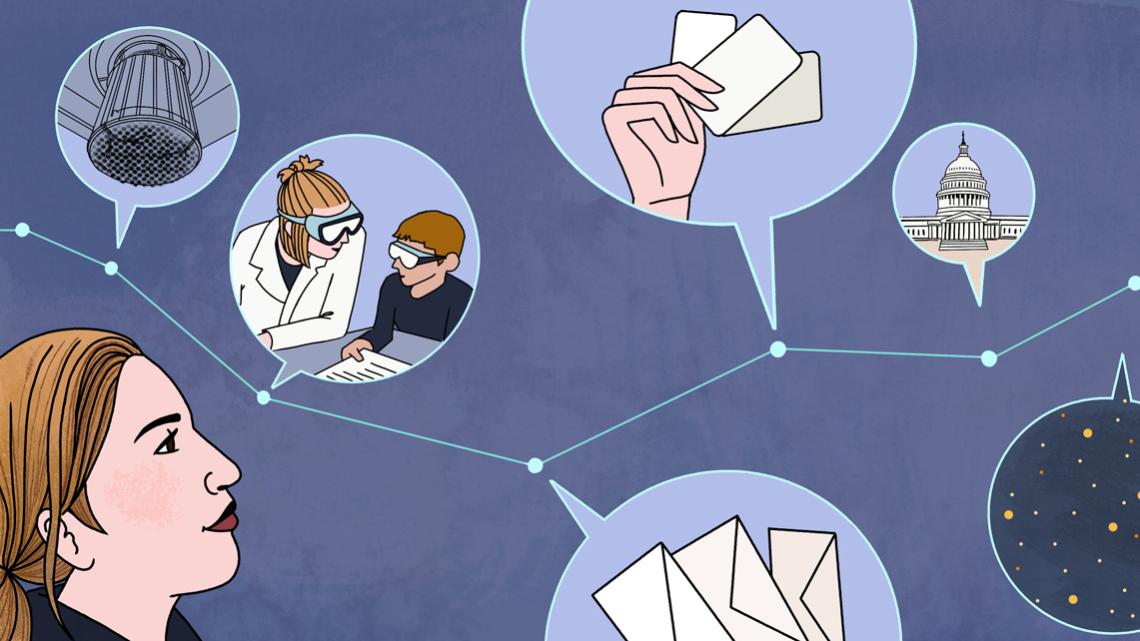 From Florida to Italy and Germany

At age 16, Lance jettisoned her high school in North Florida to take classes at the local community college, which counted for both high school and college credits. She earned an associate’s degree before receiving her high school diploma.

It was at community college that she heard a physics teacher describe the idea of a grand unified theory in which the fundamental forces of the universe would be reconciled. “And this very big-headed Cameo thought, ‘Oh boy! Hopefully in the future I’ll be the one that unifies the forces,’” she says. “And that was the bug that got me into particle physics.”

Becoming an academic researcher requires a PhD, her older brother cautioned her. By contrast, earning a bachelor’s degree in engineering had secured him an internship and later full-time position at NASA. He and his boss both discouraged her from going into physics.

She followed their advice, selecting an environmental engineering major at the University of Central Florida. But it was an elective class in cosmology that got her most excited. She transferred to the University of Florida and became a physics major. She would, she decided, get her PhD and have a career in the field.

Her path seemed headed straight in that direction. At a Conference for Undergraduate Women in Physics, she tracked down a presenter to ask if she could conduct research in her lab. The professor had no available positions, but she connected Lance with someone else who did, which led her to a research position working on dark matter simulations. With a newly updated CV, Lance applied for a National Science Foundation Research Experience for Undergraduates, landing a summer gig on the XENON1T experiment in Italy.

Back at school, Lance hung out in the physics student lounge, eventually becoming president of the Society of Physics Students and starting a “Physics at the Farmer’s Market” program, where she handed out pamphlets and homemade slime to kids to get them excited about science.

She says during her senior year, she bugged her German teacher over and over about whether he knew of any special study abroad experiences she could apply for. He said no, time and time again, until after her final exam. “And good golly gosh, that man finally said yes!” she says.

She went to Hamburg for a year on a scholarship. While there, she connected with researchers at the German accelerator center Deutsches Elektronen-Synchrotron, or DESY, and convinced them to hire her as an unpaid research assistant in dark matter phenomenology. She taught herself quantum field theory and, unrelatedly, also convinced a local director to cast her in a supporting role in the German-language play “Sleepless in Prague.”

“She has always been a fearless go-getter,” says her friend Suzanne Rosenzweig, whom she met at the University of Florida.

Lance once convinced Rosenzweig to join her in the Swiss Alps on a via ferrata climb—in which climbers secure themselves to permanent fixtures on a protected route—which turned out to be much more difficult than they imagined. “But afterward, I felt empowered,” Rosenzweig says.

Later, on the same trip, that empowered feeling led Rosenzweig to an adventurous jump off a cliff into the Adriatic Sea. “Cameo displays this extraordinary ability for finding opportunities and doing things that people wouldn’t normally consider doing,” she says.

When Lance returned from Germany, she joined her boyfriend in Ann Arbor, where he was enrolled as a physics graduate student at the University of Michigan. She studied for the GRE and taught kids about the molecular composition of water through an after-school program called Mad Science.

It was all part of her 10-year plan: Get a PhD, get a faculty position at the same university as her boyfriend, buy the metaphorical house with the white picket fence, and have a perfect life.

In 2017, she applied to three graduate programs and waited for the next phase of her life to begin. She had connections to the schools through her previous research experiences, so she was confident about how they would respond. Then, she received their decisions: three rejections.

“It still almost brings me to tears today,” she says. “This path that I had thought so long and hard about, that I had worked towards, had just fallen through.

“I didn’t know that it would also cause me to lose my identity, because I thought you had to have a PhD to be a physicist. And if I don’t have a PhD, then who am I?”

During the long Michigan winter, she considered what to do next. Rosenzweig, who planned to follow the same PhD path, says they were both devastated.

“It was difficult, because we all knew Cameo was a phenomenal researcher,” she says. “But she doesn’t let setbacks stop her. She’ll just power through until she finds the right opportunities.”

While searching online for potential career options, Lance stumbled upon the burgeoning space exploration industry—one in which private companies develop technology and concepts to prepare for travel to the moon and beyond. The idea excited her. But how could she become a part of it?

She found a two-day conference called Fusion Forum put on by a nonprofit network for students and early career professionals. She had missed the registration for it and had little money. But she was convinced that if she could get there, she could make the right connections to get into the field.

She got to work: On social media, she reached out to her high school soccer coach’s sister, who said she could sleep on her couch to be near the conference location in Colorado Springs. Her mom loaned her some shoes, and her grandmother bought her a dress.

She arrived at the five-star conference hotel and confidently bypassed the registration desk. She spent the next two days handing out cards, asking if anyone needed a physicist on their team.

She found that no one cared that she didn’t have a PhD. She had such a good time that she even stayed on to crash a second conference called the Space Symposium.

That’s where Adrian Mangiuca, vice president of infrastructure at Voyager Space Holdings, met Lance. It was the symposium’s casino night, and Mangiuca was running around with a few business associates when he saw Lance sitting at a table, scribbling on a piece of paper. He asked her what she was working on.

“And she dives into dark matter phenomenology,” Mangiuca says with a laugh. “That was around 10:30. We were talking until 4 a.m. And it wasn’t just me. She had gathered quite a large group around her and was collecting everyone’s business cards. I saw how she was talking about this incredibly complex topic to all these people, and I thought, this lady is going to be successful.”

A new path: the space industry

Mangiuca encouraged Lance to move to Washington, D.C., then helped her network. She cold-called members of the industry and asked for informational interviews.

That led to her Rhea Space Activity, an astrophysics start-up that develops technologies related to spacecraft and navigating between the Earth and the moon. She was hired as director of physics programs and was recently promoted to chief operating officer. Now, she says, she gets to “work on a lot of really cool projects in space.”

She works with governmental bodies to build concepts and technology for space, including efforts to understand how to place a spacecraft in orbit around the moon to help plan for future commercial space travel. The company’s Jervis Autonomous Module aims to help spacecraft navigate based on the position of stars and other spacecraft to reduce communication costs.

Much of her time is spent communicating the science to non-scientists—including potential funders and leaders from the US Space Force. For this, she reaches back to her Mad Science days. “I figured if I could teach a 5-year-old the molecular composition of water, I could explain to generals what space is, what we’re doing in it, and why it is so important,” she says.

She’s even attending graduate school—but not in physics. She’s getting an MS in intelligence analysis from Johns Hopkins University. “The same passion I had for my path back then is the same passion I have for my new path now,” she says. “Now I have conversations with people, and I say, ‘Don’t make a 10-year plan because someone told you that was the path to go down.’”

She was invited to give a presentation at the American Physical Society’s 2022 March Meeting, which she says she accepted to help remove the stigma of deviating from the doctoral and academic path.