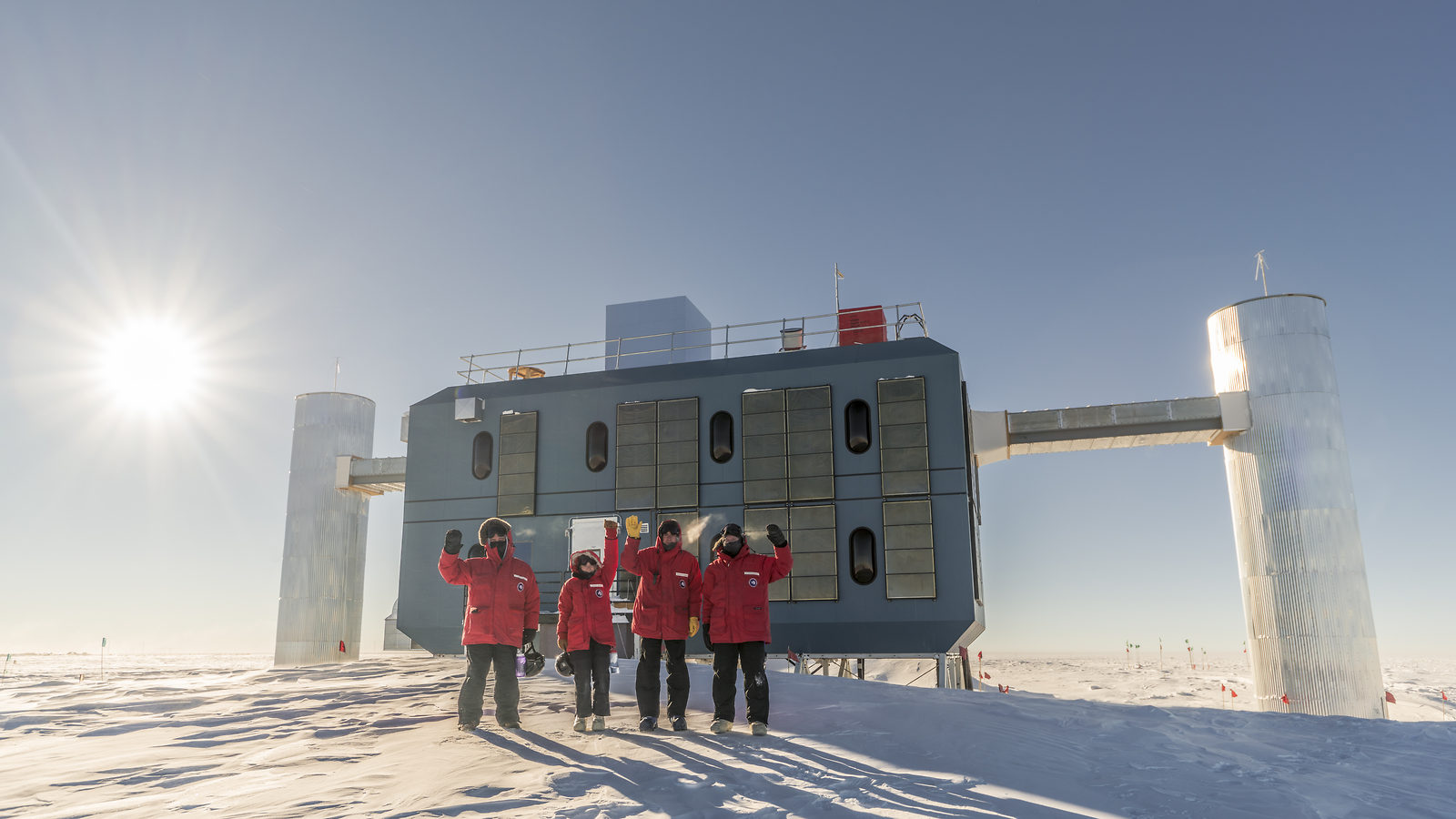 When describing neutrinos to the public, scientists often share an astounding fact: About 100 trillion of them pass through your body every second. Neutrinos are extremely abundant in the universe, and they only rarely interact with other matter. That’s why they’re constantly streaming through you—and our entire planet.

But every once and a while, a neutrino hits something.

A new result from the IceCube experiment, published today in Nature, provides a unique measurement of how often that happens. Future improvements on the result could lead to discoveries about neutrinos, particle physics or even the Earth’s inaccessible core.

Colliding with matter can cause a neutrino to shed some or all of its energy. When a neutrino loses all of its energy, it is destroyed, converted into a shower of other particles. It’s a small but “very nasty explosion of stuff,” says scientist Sandra Miarecki, who led the recently published study as a student at UC Berkeley and who now works as a professor at the US Air Force Academy in Colorado.

The more energy a neutrino has, and the denser the matter through which it is traveling, the more likely this is to happen. When neutrinos reach energies of millions of billions of electronvolts, they should find it almost impossible to make it all the way through our planet.

That had been the prediction, at least. But until the IceCube experiment, no one had ever actually measured it.

IceCube is an array of 5160 basketball-sized light sensors sunk into a cubic kilometer of Antarctic ice. When a neutrino smacks into a nucleus in the Earth, it converts its energy into another particle, a muon, which creates a flash of blue light as it passes through the ice. IceCube’s sensors record the trail of that light, letting scientists know how much energy the neutrino had and what direction it came from. Measuring the direction tells scientists how much of the Earth the neutrino has traveled through to get there.

For her thesis, Miarecki used data from IceCube’s 2010-2011 year of operation (the year prior to the completion of the detector) to measure what’s called the neutrino cross-section, the likelihood that a neutrino would interact with a nucleus, depending on the neutrino's energy.

“The thing that’s really interesting about this measurement is that we’re using neutrinos with energies tens to hundreds of times higher than what’s available at accelerators like the Large Hadron Collider,” says Spencer Klein of Lawrence Berkeley National Laboratory and UC Berkeley, Miarecki’s thesis advisor. “IceCube is the first experiment that’s big enough to do anything like this.”

This first measurement of the neutrino cross-section at high energies matched scientists’ predictions based on the Standard Model of particle physics. In this dataset, no million-billion-electronvolt neutrinos made it through from the opposite side of the Earth.

The concept of seemingly unstoppable neutrinos finally meeting their match “actually shook me a little,” when he first joined the experiment, says IceCube Spokesperson Darren Grant of the University of Alberta. “I’d been working on neutrinos for, oh goodness, 10 years, but they’d always been at low energies.”

But with more data—and IceCube has collected almost seven more years’ worth since this study began—that measurement will grow more precise. There is still a chance it will reveal a discrepancy, which could point to a new discovery in physics. “It’s just going to take someone to do the work,” Miarecki says.

Knowing the neutrino cross-section with great accuracy could also help out another field: geology.

“It’s one of the few ways I am aware of where you could actually refine the deep interior picture of the Earth to some higher precision than we know it today,” Grant says.

Scientists’ current best measurements of the interior of the Earth come from sensors measuring how vibrations move through the planet during earthquakes. These measurements are highly accurate, and over the last couple of decades, no one has found a way to improve them.

But if scientists can combine their knowledge of neutrinos with their knowledge of the center of the Earth, they should be able to make very accurate predictions about how many neutrinos they will see coming through different sections of the ground. If their measurements disagree with those predictions, it could be a sign that there’s something going on inside the Earth that they don’t yet understand.