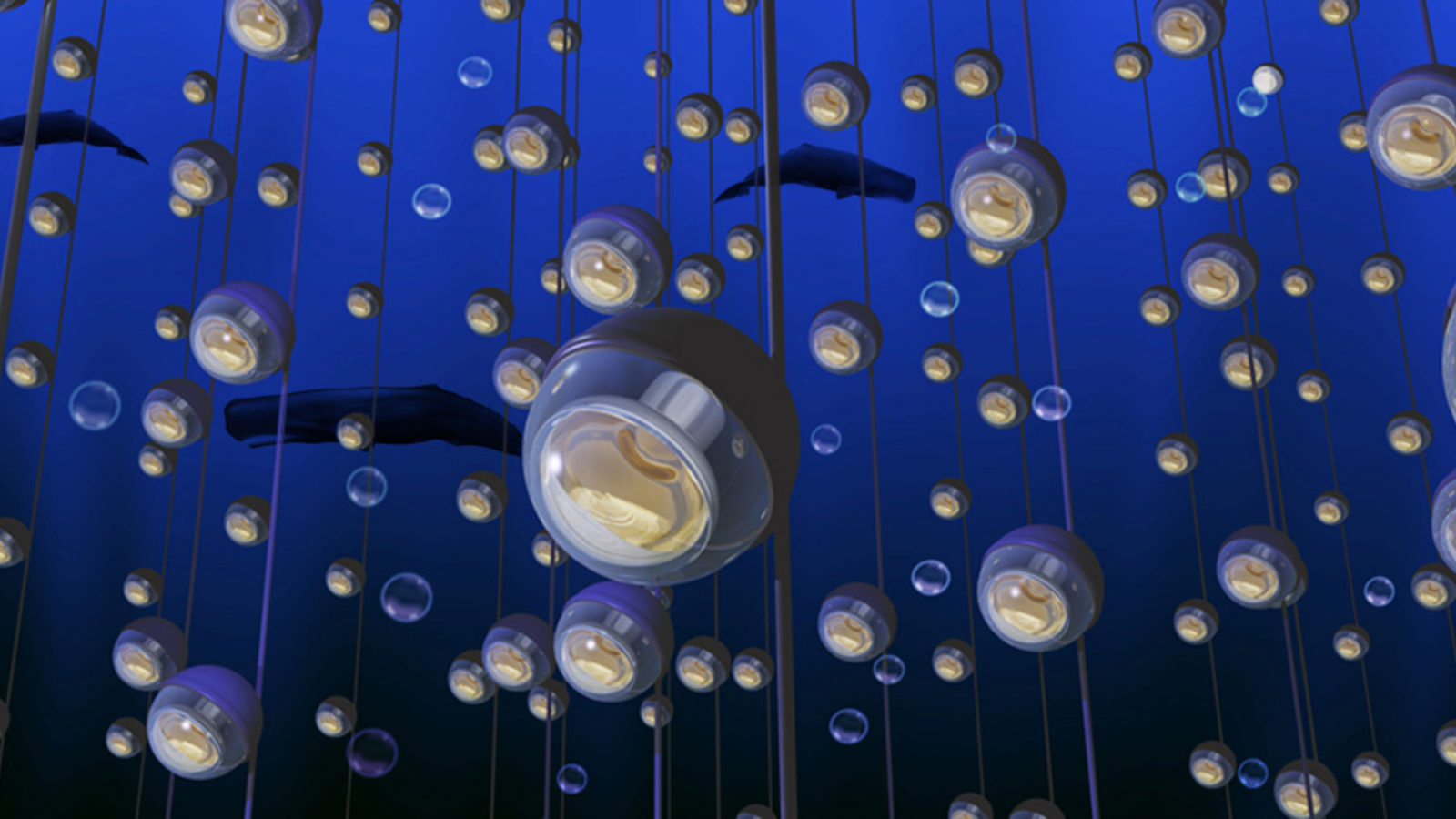 About 60 miles off the southernmost tip of Sicily, in the deepest section of the Mediterranean Sea, strange objects seem to grow. About every 330 feet, you’ll find few cables anchored to the seafloor, each pulled by a buoy close to half a mile straight up and strung with 18 glass spheres.

The spheres, each of which is a little bigger than a basketball, make up a gigantic, underwater particle detector. This is ARCA, a prototype for the even larger, planned KM3NeT detector.

ARCA was built to help scientists detect neutrinos, mysterious particles that are always passing through us and only rarely interact. But when they first fired up their prototypes in 2005, scientists discovered something else.

When a neutrino hits a molecule in the Mediterranean, it releases charged particles that pass through the water faster than the speed of light—that is, faster than the speed of light through water. The result is a burst of light—the visual equivalent of a sonic boom, on a very small scale. It’s called Cherenkov radiation, the same blue glow released in a nuclear reactor.

The glass globes strung along the bottom of the sea are full of photosensors that pick up these blue flashes and record how they move through the water. It’s the same concept used in the IceCube neutrino detector, made up of similar spheres positioned throughout a section of Antarctic ice.

Unlike IceCube, though, the sea-faring KM3NeT and its prototypes cannot count on its detector parts staying perfectly still. It must monitor their locations, which it does through acoustic sensors on the spheres themselves and their anchors.

Those acoustic sensors make recordings, which the scientists decided to use to investigate what sorts of phenomena might affect their detectors.

A week after switching on the first recording station in 2005, KM3NeT scientist Giorgio Riccobene was listening to the sounds of the sea. He heard the familiar crashing of the waves, the pattern of the rain and the noisy clacking of ships. But there was also a strange clicking sound.

“I had no idea what these signals could be,” Riccobene says.

Inhabitants of the deep

He sent the recording to colleague Gianni Pavan, a professor at the University of Pavia. Pavan was surprised at what he heard. The clicks were the calls of sperm whales, an endangered species thought to have left the Mediterranean years before.

Sperm whales use sound not only as a way to probe their surroundings, but also as a way to communicate. The whales make different sounds when performing different activities, such as diving, hunting or socializing. The sounds produced when the whales are socializing, called “codas,” vary depending on their region in the world, similar to a dialect.

Using the acoustic data from KM3NeT, scientists were able to track the sperm whales they found, monitoring what they were doing, where they were in the sea, and how many there were. They could even determine the size and gender of each one. They have identified hundreds of the creatures hiding in the deep.

“KM3NeT has provided a great infrastructure for studying the sperm whales,” says Virginia Sciacca, a research fellow at the Italian National Research Council and marine ecologist who worked on the KM3NeT collaboration studying the acoustic noise. “I think it makes a big difference having these interdisciplinary collaborations, especially for monitoring the deep sea.”

Since 2005, Riccobene and his team have continued to monitor the whales using audio sensors of  KM3NeT and of other experiments deployed off the Sicilian Coast. Colleagues located at the University of St. Andrews in Scotland, Woods Hole Oceanographic Institution in Massachusetts, and the National Research Council in Italy use the audio data to research all types of marine life. Collaborating with the Italian Institute of Geophysics and Volcanology in 2012, they discovered fin whales in the area as well.

The KM3NeT ARCA experiment is scheduled to start running end of 2019, reach the size of 1/10th of IceCube in 2020, and be completed before 2025. But to those studying the Mediterranean’s sea life, the experiment has already proven its worth.