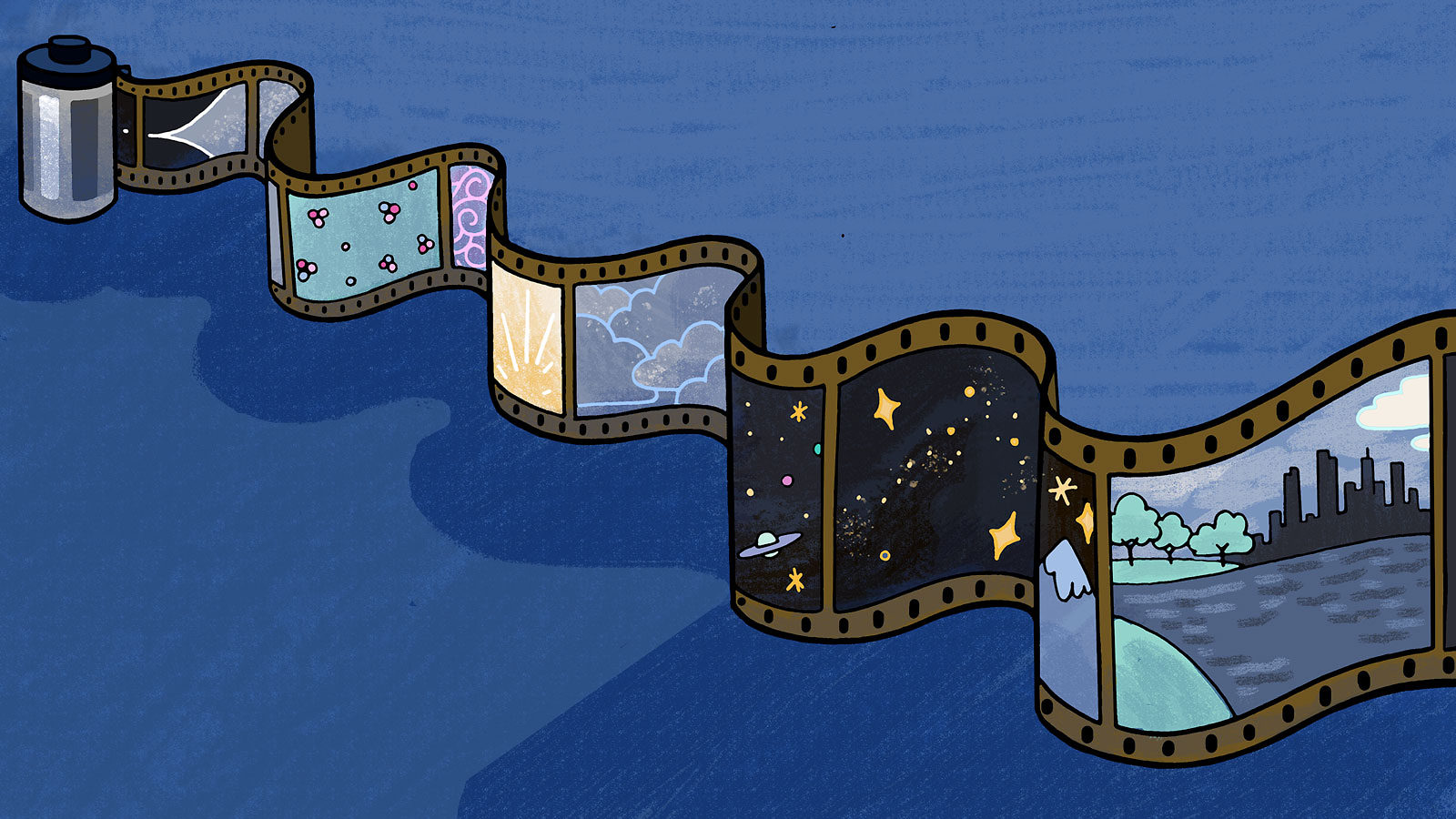 A universe is born

Take a (brief) journey through the early history of our cosmos.

The universe was a busy place during the first three minutes. The cosmos we see today expanded from a tiny speck to much closer to its current massive size; the elementary particles appeared; and protons and neutrons combined into the first nuclei, filling the universe with the precursors of elements.

By developing clever theories and conducting experiments with particle colliders, telescopes and satellites, physicists have been able to wind the film of the universe back billions of years—and glimpse the details of the very first moments in the history of our cosmic home.

Take an abridged tour through this history:

Welcome to the Planck epoch, named after the smallest scale of measurements possible in particle physics today. This is currently the closet scientists can get to the beginning of time.

Theoretical physicists don’t know much about the earliest moments of the universe. After the Big Bang theory gained popularity, scientists thought that in the first moments, the cosmos was at its hottest and densest and that all four fundamental forces—electromagnetic, weak, strong and gravitational—were combined into a single, unified force. But the current leading theoretical framework for our universe’s beginning doesn’t necessarily require these conditions.

In this stage, which began either at Planck time or shortly after it, scientists think the universe underwent superfast, exponential expansion in a process known as inflation.

Physicists first proposed the theory of inflation in the 1980s to address the shortcomings of the Big Bang theory, which, despite its popularity, could not explain why the universe was so flat and uniform, and why its different parts began expanding simultaneously.

During inflation, quantum fluctuations could have stretched out to produce a pattern that later determined the locations of galaxies. It might have been only after this period of inflation the universe became a hot, dense fireball as described in the Big Bang theory.

The elementary particles are born

When the universe was still very hot, the cosmos was like a gigantic accelerator, much more powerful than the Large Hadron Collider, running at extremely high energies. In it, the elementary particles we know today were born.

Scientists think that first came exotic particles, followed by more familiar ones, such as electrons, neutrinos and quarks. It could be that dark matter particles came about during this time.

The quarks soon combined, forming the familiar protons and neutrons, which are collectively known as baryons. Neutrinos were able to escape this plasma of charged particles and began traveling freely through space, while photons continued to be trapped by the plasma.

Scientists think that when the universe cooled enough for violent collisions to subside, protons and neutrons clumped together into nuclei of the light elements—hydrogen, helium and lithium—in a process known as Big Bang nucleosynthesis.

Protons are more stable than neutrons, due to their lower mass. In fact, a free neutron decays with a 15-minute half-life, while protons may not decay at all, as far as we know.

So as the particles combined, many protons remained unpaired. As a result, hydrogen—protons that never found a partner—make up around 74% of the mass of “normal” matter in our cosmos. The second most abundant element is helium, which makes up approximately 24%, followed by trace amounts of deuterium, lithium, and helium-3 (helium with a three-baryon core).

Scientists have been able to accurately measure the density of baryons in our universe. Most of those measurements line up with theorists’ estimations of what the quantities ought to be, but there is one lingering issue: Lithium calculations are off by a factor of three. It could be that the measurements are off, but it could also be that something we don’t yet know about happened during this time period to change the abundance of lithium. 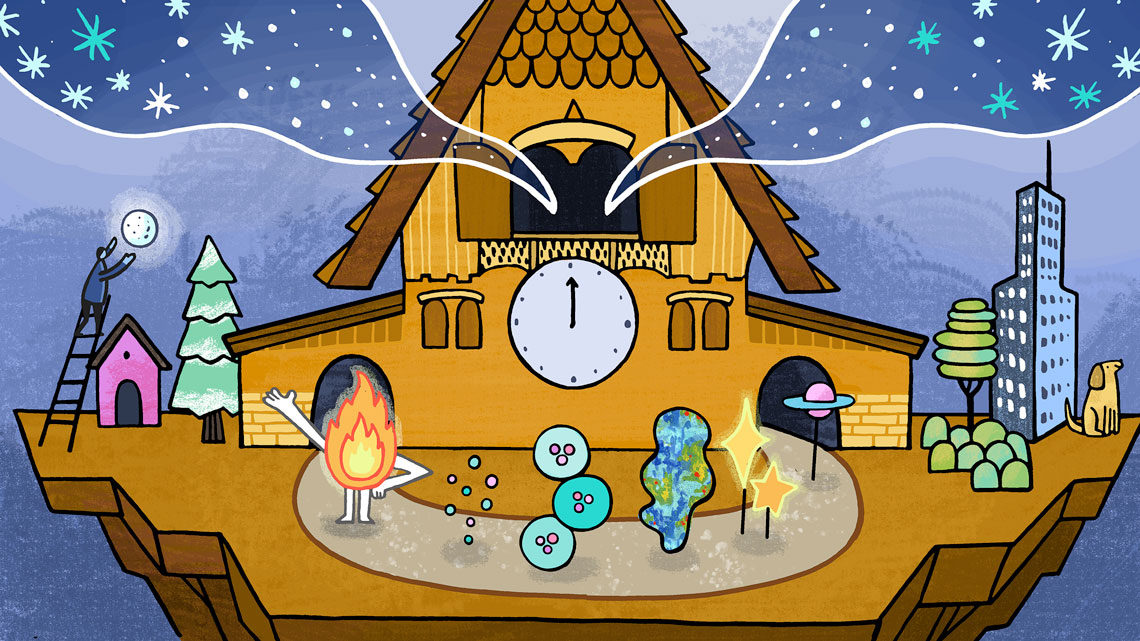 Hundreds of thousands of years after inflation, the particle soup had cooled enough for electrons to bind to nuclei to form electrically neutral atoms. Through this process, which is also known as recombination, photons became free to traverse the universe, creating the cosmic microwave background.

Today, the CMB is one of the most valuable tools for cosmologists, who probe its depths in search of answers for many of the universe’s lingering secrets, including the nature of inflation and the cause of matter-antimatter asymmetry.

Shortly after the CMB became detectable, neutral hydrogen particles formed into a gas that filled the universe. Without any objects emitting high-energy photons, the cosmos was plunged into the dark ages for millions of years.

The dark ages ended with the formation of the first stars and the occurrence of reionization, a process through which highly energetic photons stripped electrons off neutral hydrogen atoms.

Scientists think that the vast majority of the ionizing photons emerged from the earliest stars. But other processes, such as collisions between dark matter particles, may have also played a role.

At this time, matter began to form the first galaxies. Our own galaxy, the Milky Way, contains stars that were born when the universe was only several hundred million years old.

Our sun is born

The sun is one of a few hundred billion stars in the Milky Way. Scientists think it formed from a giant cloud of gas that consisted mostly hydrogen and helium.

Today, our cosmos sits at a cool 2.7 Kelvin (minus 270.42 degrees Celsius). The universe is expanding at an increasing rate, in a manner similar to (but many orders of magnitude slower than) inflation.

Physicists think that dark energy—a mysterious repulsive force that currently accounts for about 70% of the energy in our universe—is most likely driving that accelerated expansion.