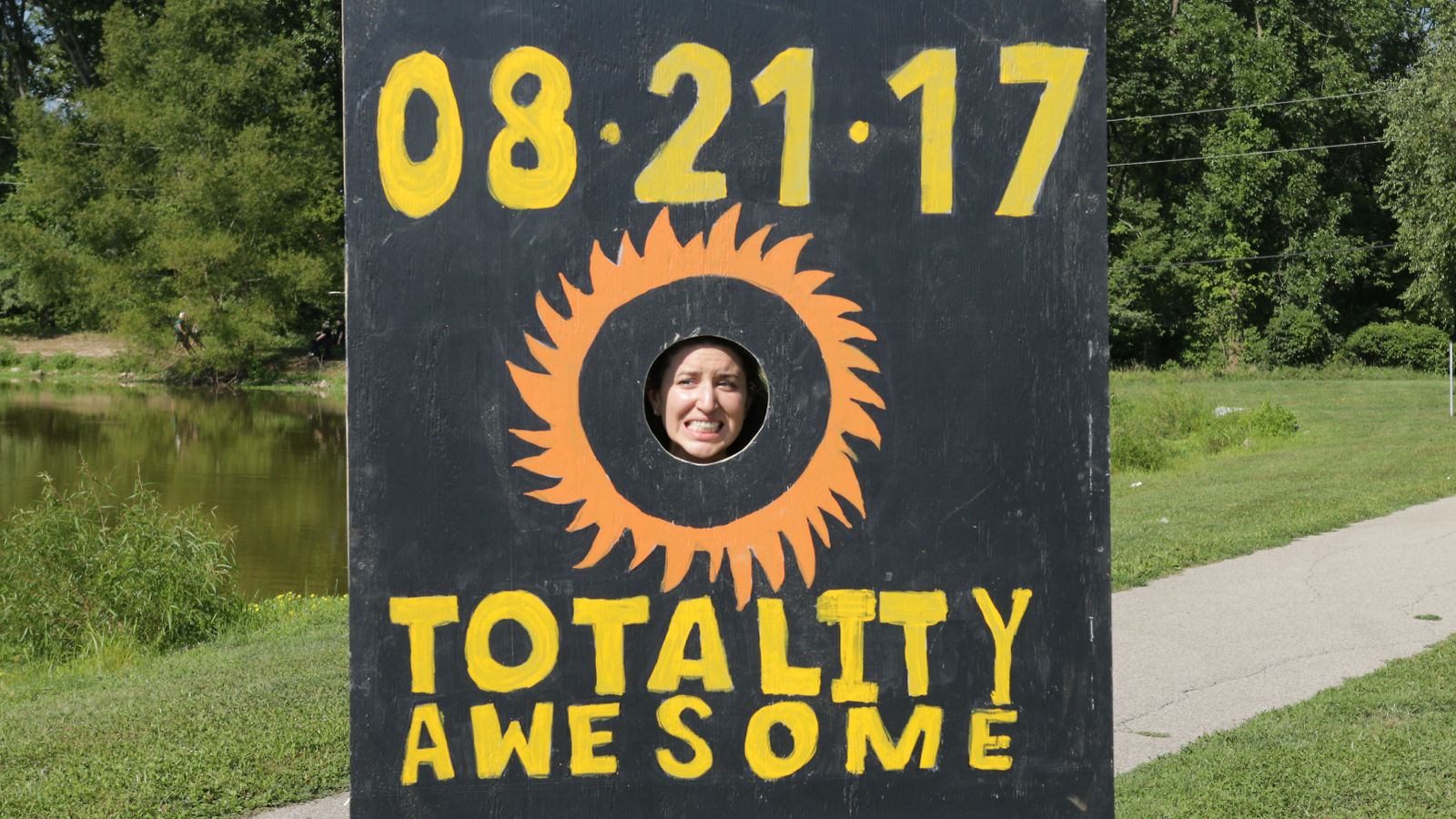 August’s Great American Eclipse brought at least a partial eclipse to most of the United States, and 14 states experienced totality, a phenomenon that occurs when the sun is completely eclipsed by the moon. Eight Illinois high school students and five of their teachers traveled into the zone of totality to witness the two to three breathtaking minutes when the moon completely blocked the sun.

However, unlike most sky-watchers on August 21, these students did more than just marvel at the eclipse: They studied it, hoping to learn something about the effects of the sun going dark. Their mission? To measure whether the eclipse changed the number of detected cosmic rays—particles from space that rain down on Earth—which could tell us something about where these cosmic rays come from.

“This was a real scientific question high school students have the opportunity to answer,” says Nate Unterman, an emeritus teacher at Glenbrook North High School. “The students came up with a very elegant, scientific hypothesis: The cosmic ray flux will change during an eclipse.”

Unterman and another Glenbrook North teacher, Tony Valsamis, came up with the idea to study cosmic rays during the eclipse at an American Association of Physics Teachers conference, and they knew where to look for researchers: The school’s cosmic ray club.

Students in the school’s cosmic ray club had already been studying the behavior of cosmic rays, which reach Earth’s surface as muons—particles that are similar to electrons—using small-scale detectors provided by QuarkNet, a program designed to give students and teachers opportunities to get involved with high-energy physics research.

Unterman and Valsamis recognized these same detectors could be used during the eclipse to see whether the number of muons reaching Earth would change—something no study has measured from the ground.

“I got a call from Mr. Unterman while he was at the AAPT conference telling me about this idea to study the eclipse,” says Clarissa Carr, a Glenbrook North student and participant in the cosmic ray club. “I was immediately on board.”

The path to totality

Four days before the eclipse, the research team, which consisted of students and teachers from Glenbrook North and Ida Crown Jewish Academy, made a five-hour trek from the Chicago area to Jefferson College in Hillsboro, Missouri.

“I drove a school bus with three students in it,” Valsamis says. “The rest of it was full of detectors, mounts and electronics.” 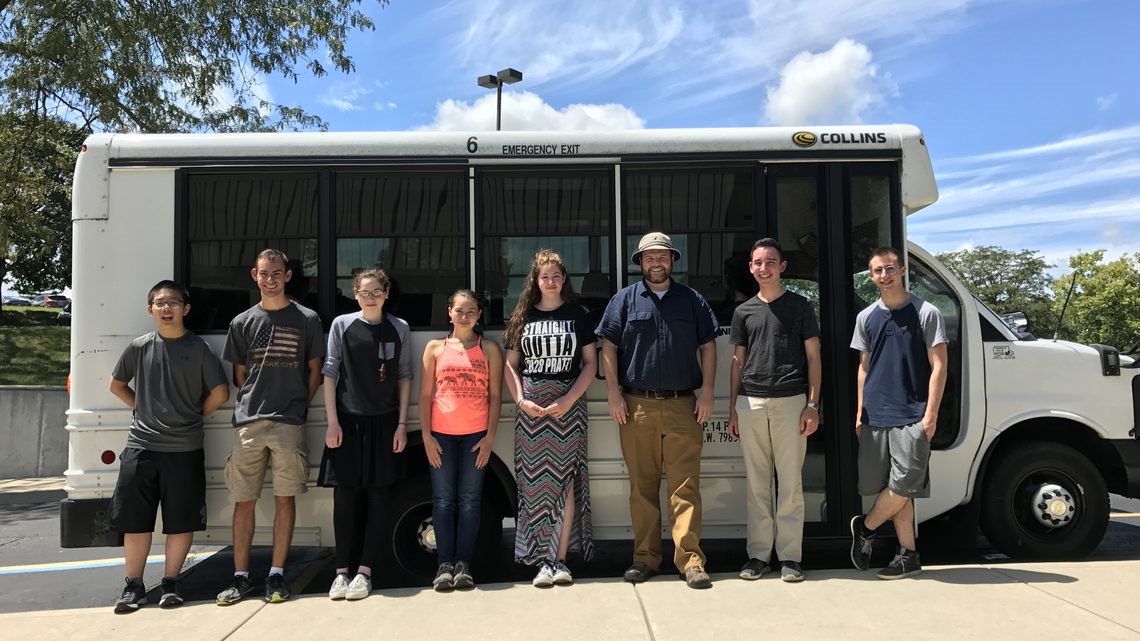 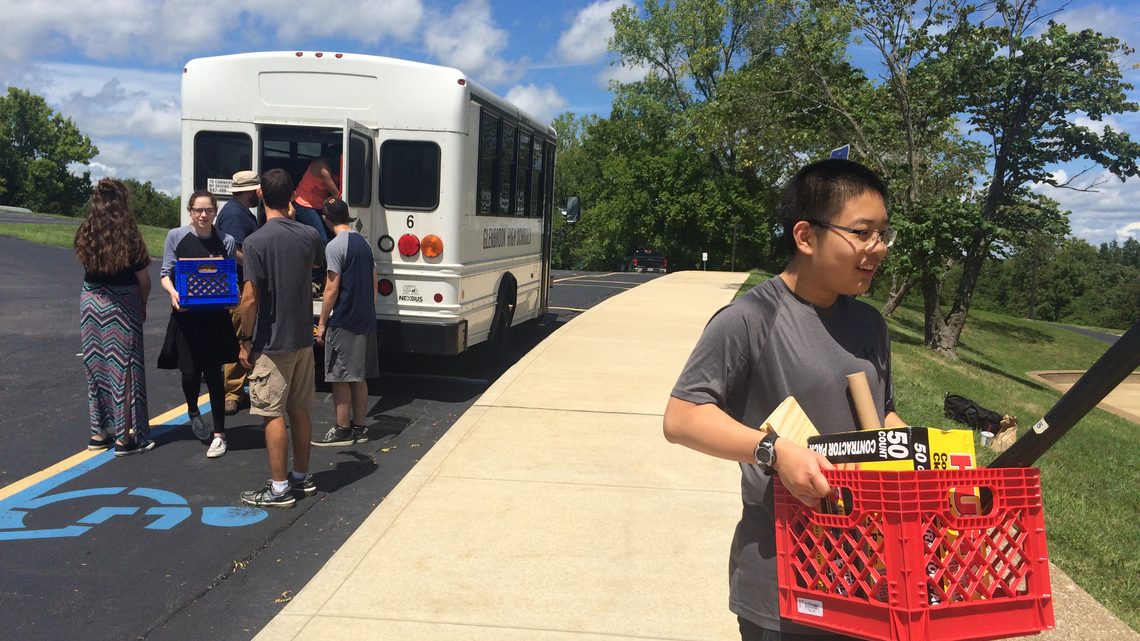 Students unload equipment from the bus to set up the experiment. 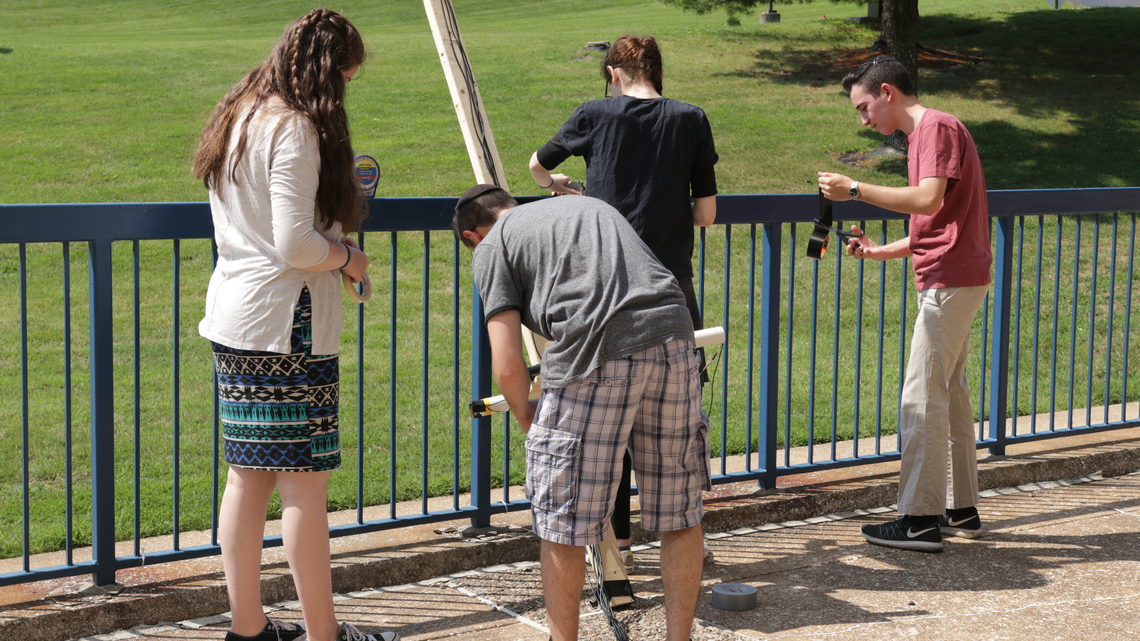 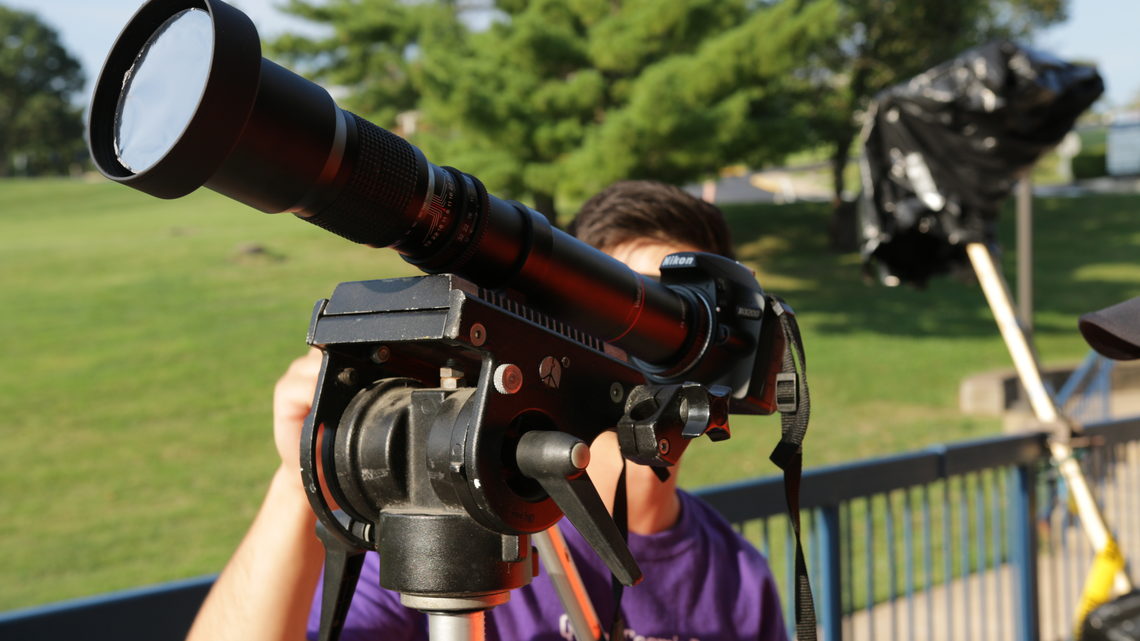 Tony Valsamis sets up a camera to capture photos of the eclipse. 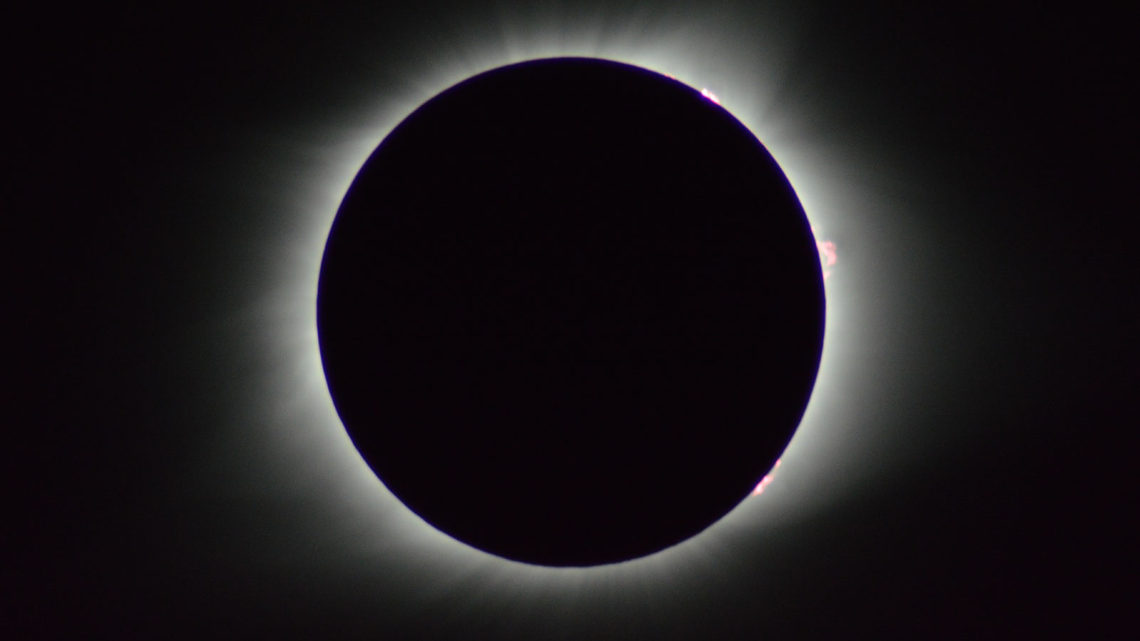 A photo of the eclipse captured by Tony Valsamis. 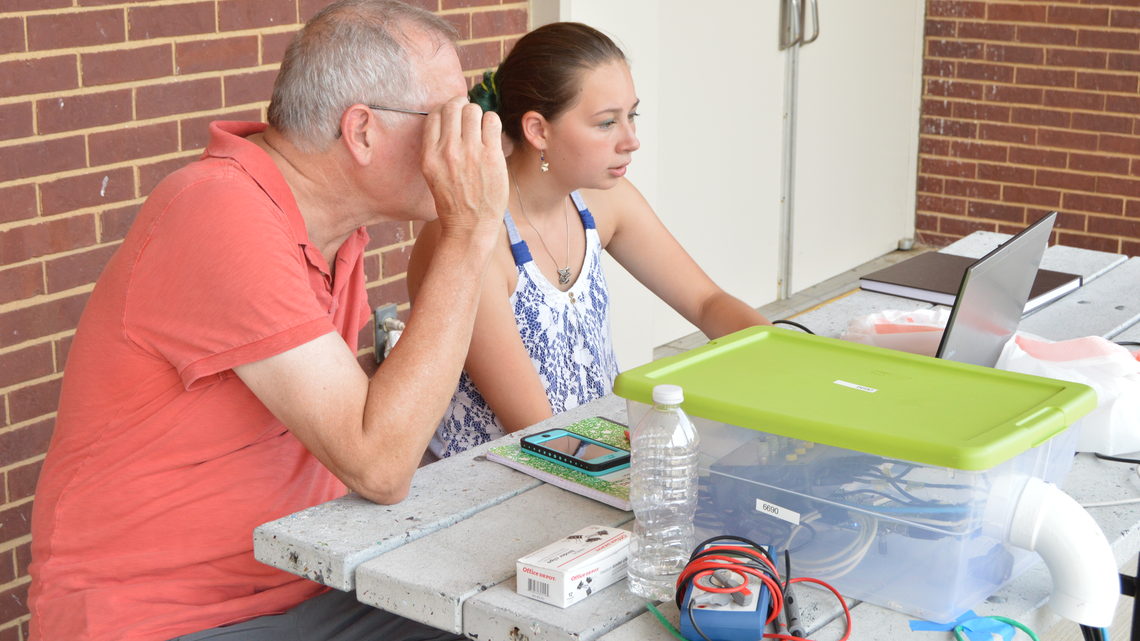 Immediately after arriving at Jefferson College, which would serve as home base for the research team, the students hurried about unloading equipment, setting up detectors on their mounts and connecting wires. Setup took a whole day and then some, partially because of a faulty detector.

“When one of our detectors had a faulty power cable, we all had to gather around the detector and take it apart,” says Carr, who was responsible for log-keeping during the experiment as well as setup. “We managed to put it back together and get it working—it was memorable but stressful!”

After setup, the detectors could begin collecting baseline data to be compared with data from the eclipse. The researchers had nothing left to do but wait for totality. To pass the time, students visited a local farmer’s market, played volleyball and theorized about what the eclipse might be like.

“We were all hypothesizing about what we would see during the eclipse,” says Jacob Rosenberg, a Glenbrook North student. “None of us had a clue what to expect, but we were all excited.”

When the day of the eclipse finally arrived, crowds of people joined the research team at Jefferson College, eager to experience the United States’ first total solar eclipse in decades. As excitement filled the air, the research team made last minute adjustments to their detectors, making sure everything would be in working order during the short window of totality. With detectors pointed at the sky and eclipse glasses at the ready, the team was prepared.

In the minutes leading up to totality, spectators at Jefferson College peered up through their glasses, waiting until the moon completely covered the sun.

“The total solar eclipse was incredible to look at,” Rosenberg recalls. “There was a 360-degree sunset, and we could hear the noises of nature change as people ‘ooh'ed and ‘ahh'ed.”

Valsamis came equipped to capture photos of the eclipse, amassing over 700 pictures.

“None of my photos mimic the experience or explain how beautiful it was,” Valsamis says. “It was like the best picture but better, and being surrounded by enthusiastic people was infectious.”

In the months since it happened, the eclipse may have become a passing memory to most, but it’s stayed at the forefront of the research team’s mind. Students from Ida Crown and Glenbrook North meet at least once a month to collaborate on data analysis.

“Students had a unique opportunity to do this research almost on their own," Valsamis says. “It was incredible to see the students learn to collaborate.”

While not all the data has been analyzed yet—and some potentially interesting data points have required more intense analysis—students have already benefited from the experience of conducting research.

“I’ve learned from this experiment the importance of being knowledgeable about what you’re doing, but being open to learning more,” Carr says. “I’ve also learned a lot about teamwork and community-building.”

In 2018, Carr and Rosenberg will present some of the results from the solar eclipse study at the annual American Association of Physics Teachers conference. Both students are excited about the opportunity—although understandably a little nervous.

“It’s a little intimidating to present in front of so many smart people, but I’m not too worried," Rosenberg says. “I remind myself that anyone, no matter age or experience, can always contribute to research and learning more about the universe.”