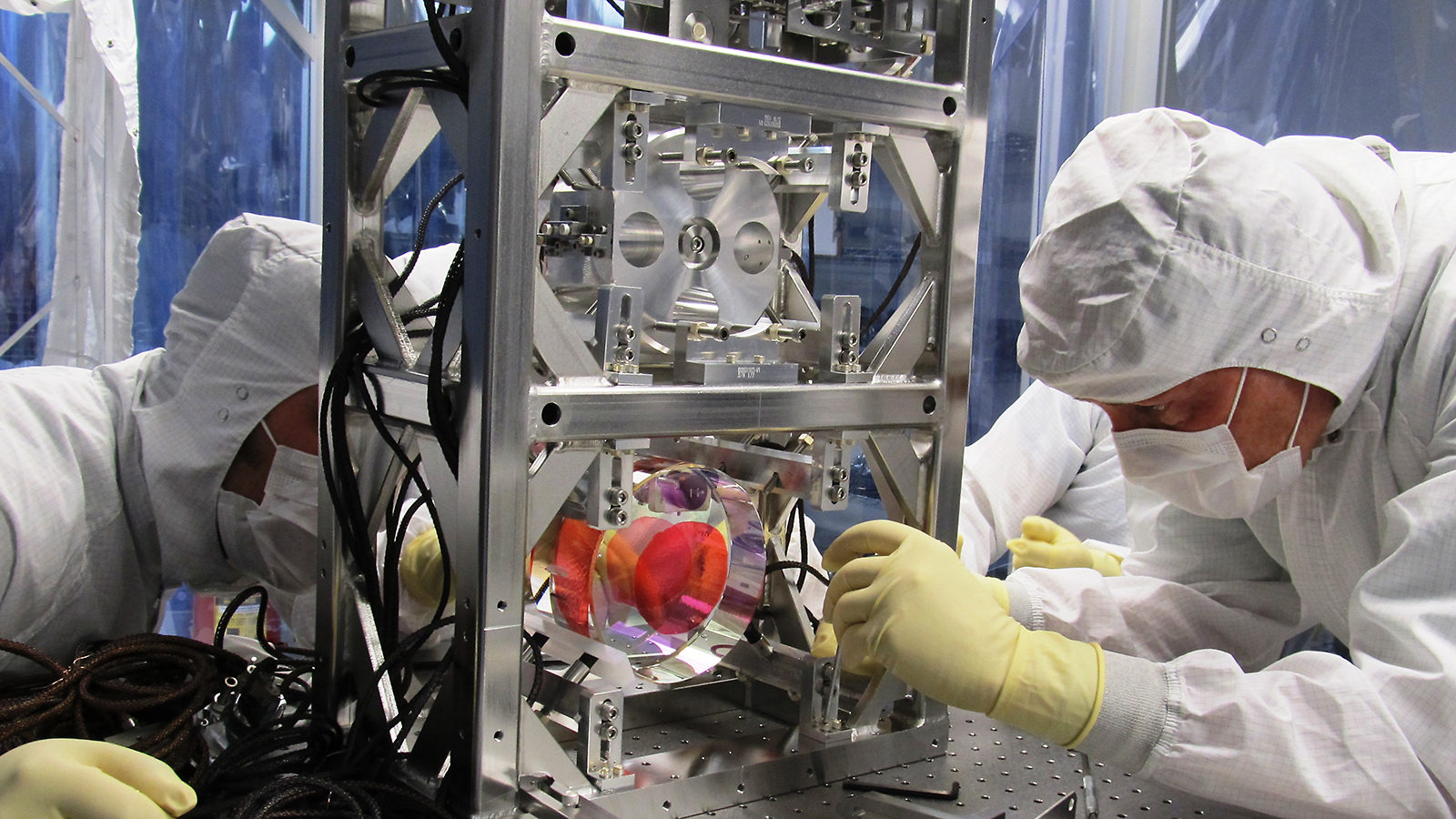 A tale of two black holes

What can the surprisingly huge mass of the black holes detected by LIGO tell us about dark matter and the early universe?

The historic detection of gravitational waves announced earlier this year breathed new life into a theory that’s been around for decades: that black holes created in the first second of the universe might make up dark matter. It also inspired a new idea: that those so-called primordial black holes could be contributing to a diffuse background light.

The connection between these perhaps seemingly disparate areas of astronomy were tied together neatly in a theory from Alexander Kashlinsky, an astrophysicist at NASA’s Goddard Spaceflight Center. And while it’s an unusual idea, as he says, it could be proven true in only a few years.

Kashlinsky’s focus has been on a residual infrared glow in the universe, the accumulated light of the earliest stars. Unfortunately, all the stars, galaxies and other bright objects in the sky—the known sources of light—oversaturate this diffuse glow. That means that Kashlinsky and his colleagues have to subtract them out of infrared images to find the light that’s left behind.

They’ve been doing precisely that since 2005, using data from the Spitzer space telescope to arrive at the residual infrared glow: the cosmic infrared background (CIB).

In 2013, Kashlinsky and colleagues compared the CIB and CXB and found correlations between the patchy patterns in the two datasets, indicating that something is contributing to both types of background light. So what might be the culprit for both types of light?

“The only sources that could be coherent across this wide range of wavelengths are black holes,” he says.

To explain the correlation they found, roughly 1 in 5 of the sources had to be black holes that lived in the first few hundred million years of our universe. But that ratio is oddly large.

“For comparison,” Kashlinsky says, “in the present populations, we have 1 in 1000 of the emitting sources that are black holes. At the peak of star formation, it’s 1 in 100.”

He wasn’t sure how the universe could have ever had enough black holes to produce the patterns his team saw in the CIB and CXB. Then the Laser Interferometric Gravitational-wave Observatory (LIGO) discovered a pair of strange beasts: two roughly-30-solar-mass black holes merging and emitting gravitational waves.

A few months later, Kashlinsky saw a study led by Simeon Bird analyzing the possibility that the black holes LIGO had detected were primordial—formed in the universe’s first second. “And it just all came together,” Kashlinsky says.

The crucial ripples in space-time picked up by the LIGO detector on September 14, 2015, came from the last dance of two black holes orbiting each other and colliding. One black hole was 36 times the sun’s mass, the other 29 times. Those black-hole weights aren’t easy to make.

The majority of the universe’s black holes are less than about 15 solar masses and form as massive stars collapse at the end of their lives. A black hole weighing 30 solar masses would have to start from a star closer to 100 times our sun’s mass—and nature seems to have a hard time making stars that enormous. To compound the strangeness of the situation, the LIGO detection is from a pair of those black holes. Scientists weren’t expecting such a system, but the universe has a tendency to surprise us.

Bird and his colleagues from Johns Hopkins University next looked at the possibility that those black holes formed not from massive stars but instead during the universe’s first fractions of a second. Astronomers haven’t yet seen what the cosmos looked like at that time, so they have to rely on theoretical models.

In all of these models, the early universe exists with density variations. If there were regions of very high-contrasting density, those could have collapsed into black holes in the universe’s first second. If those black holes were at least as heavy as mountains when they formed, they’d stick around until today, dark and seemingly invisible and acting through the gravitational force. And because these primordial black holes formed from density perturbations, they wouldn’t be comprised of protons and neutrons, the particles that make up you, me, stars and, thus, the material that leads to normal black holes.

All of those characteristics make primordial black holes a tempting candidate for the universe’s mysterious dark matter, which we believe makes up some 25 percent of the universe and reveals itself only through the gravitational force. This possible connection has been around since the 1970s, and astronomers have looked for hints of primordial black holes since. Even though they’ve slowly narrowed down the possibilities, there are a few remaining hiding spots—including the region where the black holes that LIGO detected fall, between about 20 and 1000 solar masses.

Astronomers have been looking for explanations of what dark matter is for decades. The leading theory is that it’s a new type of particle, but searches keep coming up empty. On the other hand, we know black holes exist; they stem naturally from the theory of gravity.

Kashlinsky’s newest analysis took the idea of primordial black holes the size that LIGO detected and looked at what that population would do to the diffuse infrared light of the universe. He evolved a model of the early universe, looking at how the first black holes would congregate and grow into clumps. These black holes matched the residual glow of the CIB and, he found, “would be just right to explain the patchiness of infrared background by sources that we measured in the first couple hundred million years of the universe.”

This theory fits nicely together, but it’s just one analysis of one possible model that came out of an observation of one astrophysical system. Researchers need several more pieces of evidence to say whether primordial black holes are in fact the dark matter. The good news is LIGO will soon begin another observing run that will be able to see black hole collisions even farther away from Earth and thus further back in time. The European gravitational wave observatory VIRGO will also come online in January, providing more data and working in tandem with LIGO.

More cases of gravitational waves from black holes around this 30-solar-masses range could add evidence that there is a population of primordial black holes. Bird and his colleague Ilias Cholis suggest looking for a more unique signal, though, in future gravitational-wave data. For two primordial black holes to become locked in a binary system and merge, they would likely be gravitationally captured during a glancing interaction, which could result in a signal with multiple frequencies or tones at any one moment.

“This is a rare event, but it would be very characteristic of our scenario,” Cholis says. “In the next 5 to 10 years, we might see one.”

This smoking-gun signature, as they call it, would be a strong piece of evidence that primordial black holes exist. And if such objects are floating around our universe, it might not be such a stretch to connect them to dark matter.

Editor’s note: Theorists Sébastien Clesse and Juan García-Bellido predicted the existence of massive, merging primordial black holes in a paper published on the arXiv on January 29, 2015, more than seven months before the signal of two such giants reached the LIGO detector. In the paper, they claimed that primordial black holes could have been the seeds of galaxies and constitute all of the dark matter in the universe.