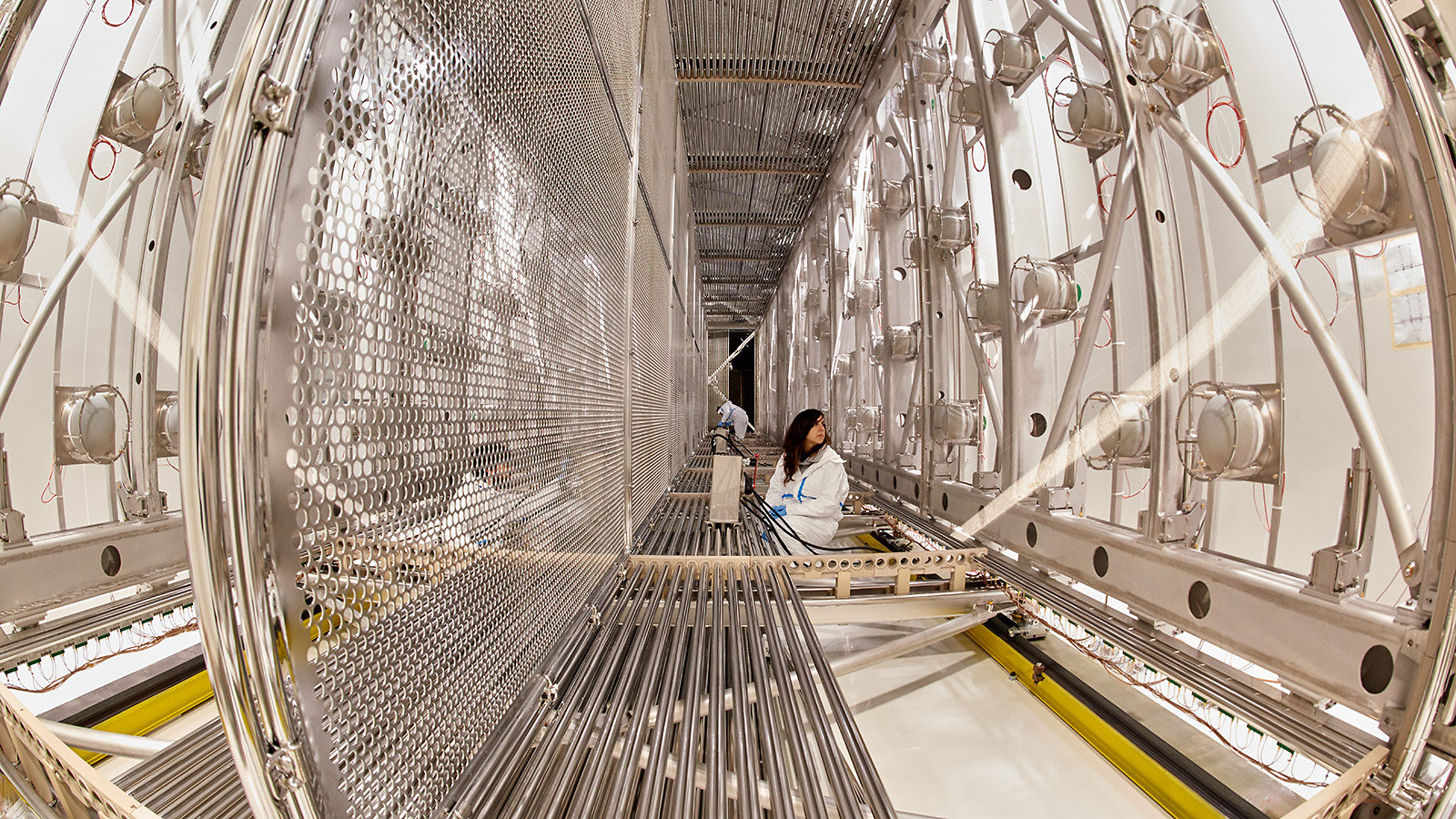 Born in Italy, revitalized at CERN and bound for the US, the ICARUS detector is emblematic of modern particle physics experiments: international, collaborative and really, really big.

The ICARUS T600 (if you’re inclined to use the full name) was a pioneer in particle physics technology and is still the largest detector of its kind. When operational, the detector is filled with 760 tons of liquid argon, the same element that, in gas form, makes up about 1 percent of our atmosphere. Since its creation, the ICARUS detector has become a model for modern experiments in the worldwide quest to better understand hard-to-catch particles called neutrinos.

Neutrinos are incredibly small, neutral and rarely interact with other particles, making them difficult to study. Even now, 60 years after their discovery, neutrinos continue to surprise and confound scientists. That’s why this detector with a special talent for neutrino-hunting is undertaking a long journey across the Atlantic to a new home in the United States.

ICARUS got its start in Italy. A groundbreaking large-scale detector, it was the prototype of a sci-fi-sounding instrument called a liquid argon time projection chamber. It functions like four giant cameras, each taking separate 3D images of the signals from neutrinos interacting inside. The active section of the detector is about twice the height of a refrigerator, a couple of meters wider than that and about the length of a bowling lane.

The concept of a liquid argon time projection chamber was proposed in 1977 by physicist Carlo Rubbia, who would later win the Nobel Prize for the discovery of the massive, short-lived subatomic W and Z particles, the carriers of the so-called electroweak force. ICARUS came to life in 2010 at the Gran Sasso National Laboratory, run by Italy’s National Institute for Nuclear Physics (INFN) after decades of development to advance technology and construct the experiment.

At the heart of Gran Sasso Mountain, shielded from cosmic rays raining down from space beneath 1400 meters of rock, it gathered thousands of neutrino interactions during its lifetime. The detector measured neutrinos that traveled 450 miles (730 kilometers) from CERN, but it also saw neutrinos born through natural processes in our sun and our atmosphere. Thus its name: Imaging Cosmic and Rare Underground Signals.

The ICARUS collaboration studied various properties of neutrinos, including a surprising phenomenon called neutrino oscillation. Neutrinos come in three varieties, or flavors, and have the uncommon ability to change from one type to another as they travel. But the proof of technology was just as important as the knowledge the experiment gained about neutrinos. ICARUS showed that liquid argon technology was an efficient, reliable and precise way to study the elusive particles.

“Following its initial conception, the experimental development from a table-top device to the huge ICARUS detector has required a number of successive steps in an experimental journey that has lasted almost 20 years,” says Carlo Rubbia, spokesperson of the ICARUS collaboration. “The liquid argon, although initially coming from air, must reduce impurities to a few parts per trillion, a tiny amount in volume and free electron lifetimes of 20 milliseconds. Many truly remarkable collaborators have participated in Italy in the creation of such a novel technology.”

CERN shut down its neutrino beam in 2012, but ICARUS had more to offer. Scientists decided to move the detector to the US Department of Energy’s Fermi National Accelerator Laboratory, to make use of one of its intense neutrino beams.

To make the transition, ICARUS needed an upgrade. Workers maneuvered ICARUS out of the crowded Gran Sasso lab, packed it in two modules (drained of liquid argon) onto special transporters, and wound their way through the Alps to just the place to get an upgrade, the European particle physics laboratory CERN.

A rebirth at CERN: Geneva, Switzerland

After traversing the Mont Blanc tunnel and winding through small French villages toward Geneva, the two large ICARUS modules arrived at CERN in December 2014. After several years of operation at Gran Sasso, the detector was ready for a reboot. One of the main tasks was updating all the electronics and the read-out system.

“The detector itself is very modern and sophisticated, but the supporting technology has evolved over the last 20 years,” says Andrea Zani, a CERN researcher working on the ICARUS experiment. “For example, the original cables are not produced anymore, and the new data read-out system will be higher-performing, exploiting newer components that are far more compact.”

Zani and his colleagues started disassembling parts of the detector at Gran Sasso and then continued their work at CERN. They are replacing the old electronics with 50,000 new read-out channels, which streamline the data collection process and will improve the experiment’s performance overall. Other upgrades involved realigning components to improve the detector’s precision.

“The high-voltage cathode plates were slightly deformed in a few places, which was fine when the experiment first started operation,” Zani says, “but we now we have the capability to make even more precise measurements. We had to heat and then press the plates until they were almost perfectly flat.”

The team also replaced a few dozen outdated light sensors with 360 new photomultiplier tubes, which are now nested behind the wires lining the inner walls of their detectors.

When neutrinos strike atoms of argon in one of the detectors, they release a flash of light and a cascade of charged particles. As these charged particles pass through the detector they ionize other argon atoms releasing electrons. An electric field across the detector causes these electrons to drift toward a plane of roughly 13,000 wires (52,000 in total, counting all four sections of the detector), which measure the incoming particles and enable scientists to reconstruct finely detailed images.

“In addition to the cascade of ionized particles, neutrinos produce a tiny flash of ultraviolet light when they interact with argon atoms,” Zani says. “We know the velocity of electrons as they travel through the liquid argon, and can calculate a particle’s distance from the wire detectors based on the time it takes for the electrical signal to arrive after this flash.

These precise location measurements help scientists distinguish between interesting neutrino interactions and ordinary cosmic rays. Before their installation, all 360 new photomultiplier tubes had to be dusted with a fine powder that shifts the original UV light into a deep blue glow. Over the course of several months, a dedicated team of physicists and technicians completed the process of dusting, testing and finally installing the new light sensors.

In addition to refurbishing the detector, CERN’s engineering team designed and built two huge coolers that will eventually hold the two large ICARUS modules. These containers work much like a thermos and use a vacuum between their inner and outer walls. A layer of solid foam between them will prevent heat from seeping into the experiment. An international collaboration of scientists and engineers are also developing the supporting infrastructure that will enable ICARUS to integrate into its new home at Fermilab.

The final step was stress-testing the containers and packaging the detector for its long journey across the Atlantic.

“It’s been a lot of work,” Zani says, “and putting this all together has been a close collaboration between many different institutions. But we all have the common goal of preparing this detector for its second life at Fermilab.”

While the ICARUS detector was getting an upgrade at CERN, teams of people at Fermilab were preparing for its arrival.

In July 2015, work began on the building that will house the detector 30 feet underground, precisely in the path of Fermilab’s neutrino beam. To keep the cryogenic vessels cold, a team of workers from CERN and INFN visited Fermilab in May 2017 to help install a steel structure that will hold a hefty amount of insulation.

“We couldn’t do this without our partners around the world, and it’s been very rewarding to see it all come together,” says Peter Wilson, the head of Fermilab’s short-baseline neutrino program. “The steel vessel was designed by CERN and manufactured in Poland. The electronic systems were designed by INFN. We’re working with CERN, INFN and other institutions on cosmic-ray taggers that will go above, around and below the detector.”

When the ICARUS detector arrives, it will spend a couple of months undergoing tests and final preparations before being lowered by crane into the building. Once there, it will take its place as the largest in a suite of three detectors on site at Fermilab with a common purpose: to search for a theorized, but never seen, fourth type of neutrino.

Scientists have observed three types of neutrinos: the muon, the electron and the tau neutrino. But they have also seen hints that those three types might be changing into another type they can’t detect. Two experiments in particular—the Liquid Scintillator Neutrino Detector (LSND) at Los Alamos National Lab and MiniBooNE at Fermilab—saw an unexplained excess of charged particles of unexplained origin. One theory is that they were produced by so-called “sterile” neutrinos, which would not interact in the same way as the other three neutrinos.

ICARUS will join the Short-Baseline Near Detector, currently under construction, and MiniBooNE’s successor, MicroBooNE, which has been taking data for nearly two years, on the hunt for sterile neutrinos. All three detectors use the same liquid-argon technology pioneered for ICARUS.

The journey of the ICARUS detector could have a destination beyond its new home at Fermilab. If evidence of a new kind of neutrino were discovered, it could travel all the way to a new understanding of the universe.