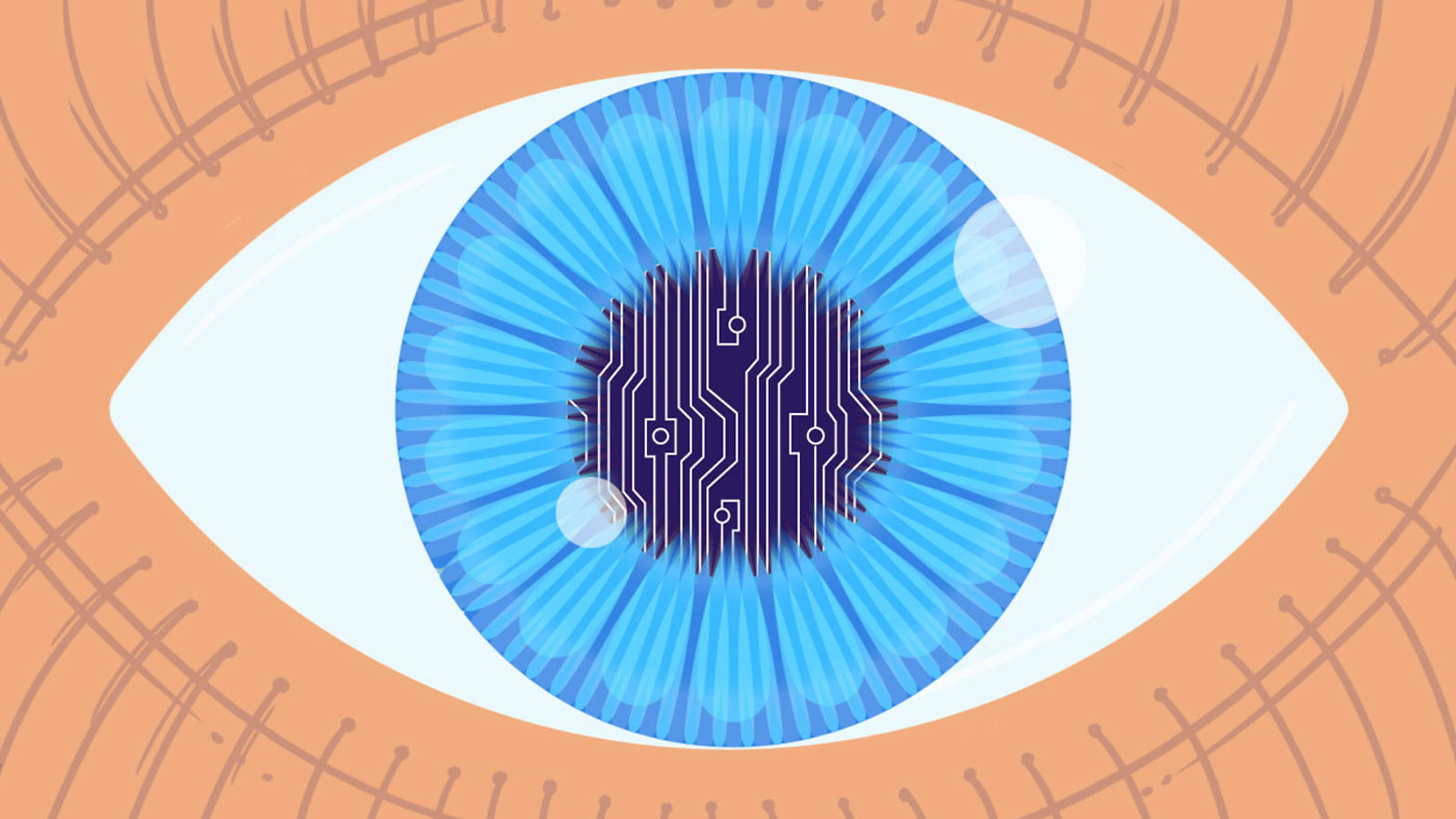 In 1995, physicist Alan Litke co-wrote a particularly prescient article for Scientific American about potential uses for an emerging technology called the silicon microstrip detector. With its unprecedented precision, this technology was already helping scientists search for the top quark and, Litke wrote, it could help discover the elusive Higgs boson. He further speculated that it could perhaps also begin to uncover some of the many mysteries of the brain.

As the article went to press, physicists at Fermilab announced the discovery of the top quark, using those very same silicon detectors. In 2012, the world celebrated the discovery of the Higgs boson, aided by silicon microstrip detectors at CERN. Now Litke’s third premonition is also coming true: His work with silicon microstrip detectors and slices of retinal tissue is leading to developments in neurobiology that are starting to help people with certain kinds of damage to their vision to see.

“The starting point and the motivation was fundamental physics,” says Litke, who splits his time between University of California, Santa Cruz, and CERN. “But once you have this wonderful technology, you can think about applying it to many other fields.”

Silicon microstrip detectors use a thin slab of silicon, implanted with an array of diode strips, to detect charged particles. As a particle passes through the silicon, a localized current is generated. This current can be detected on the nearby strips and measured with high spatial resolution and accuracy.

Litke and collaborators with expertise in, and inspiration from, the development of silicon microstrip detectors, fabricated two-dimensional arrays of microscopic electrodes to study the complex circuitry of the retina. In the experiments, a slice of retinal tissue is placed on top of one of the arrays. Then a movie—a variety of visual stimuli including flashing checkerboards and moving bars—is focused on the input neurons of the retina, and the electrical signals generated by hundreds of the retina’s output neurons are simultaneously recorded. This electrical activity is what would normally be sent as signals to the brain and translated into visual perceptions. 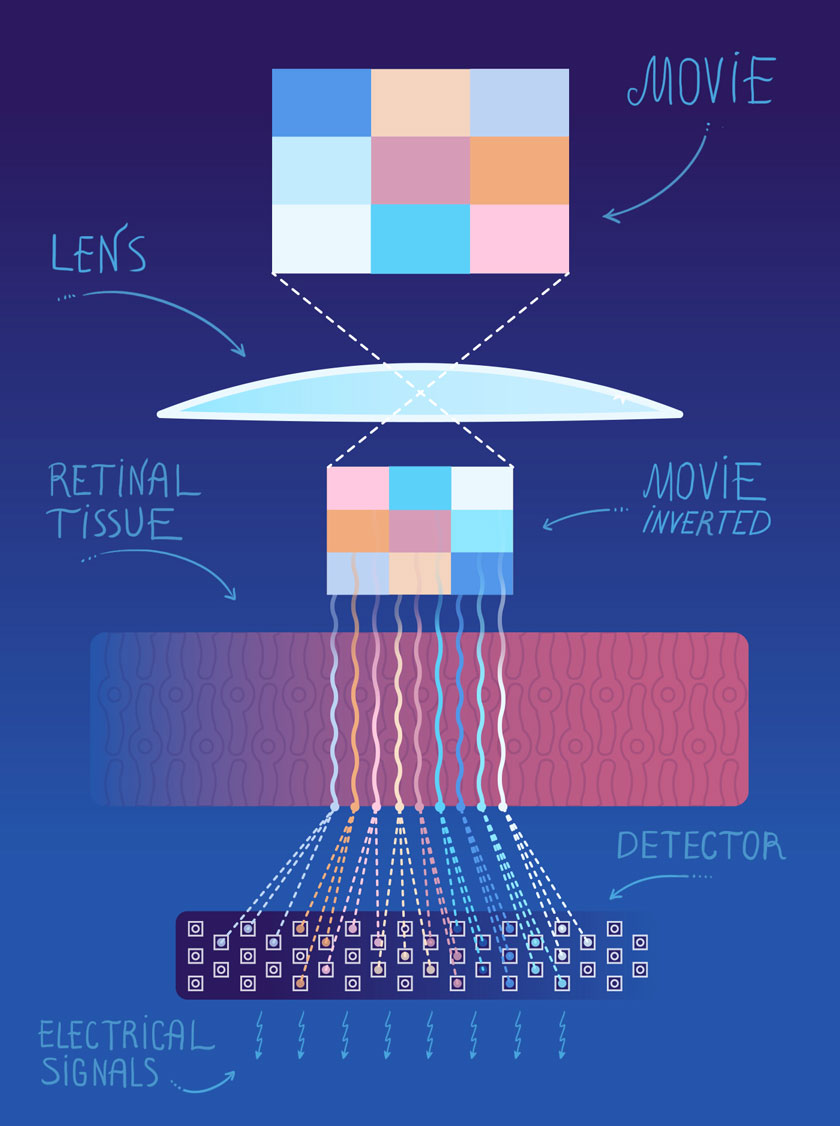 This process allowed Litke and his collaborators to help decipher the retina’s coded messages to the brain and to create a functional connectivity map of the retina, showing the strengths of connections between the input and output neurons. That in itself was important to neurobiology, but Litke wanted to take this research further, to not just record neural activity but also to stimulate it. Litke and his team designed a system in which they stimulate retinal and brain tissue with precise electrical signals and study the kinds of signals the tissue produces in response.

Such observations have led to an outpouring of new neurobiology and biomedical applications, including studies for the design of a retinal prosthesis, a device that can restore sight. In a disease like retinitis pigmentosa or age-related macular degeneration, the eye’s output system to the brain is fine, but the input system has degraded.

In one version of a retinal prosthesis, a patient could wear a small video camera—something similar to Google Glass. A small computer would process the collected images and generate a pattern of electrical signals that would, in turn, stimulate the retina’s output neurons. In this way, the pattern of electrical signals that a naturally functioning eye would create could be replicated. The studies with the stimulation/recording system are being carried out in collaboration with neurobiologist E. J. Chichilnisky (Salk Institute and Stanford University) and physicist Pawel Hottowy (AGH University of Science and Technology, Krakow). The interdisciplinary and international character of the research highlights its origins in high energy physics.

In another approach, the degraded input neurons—the neurons that convert light into electrical signals—are functionally replaced by a two-dimensional array of silicon photodiodes. Daniel Palanker, an associate professor at Stanford University, has been using Litke’s arrays, in collaboration with Alexander Sher, an assistant professor at UCSC, who completed his postdoctoral work with Litke, to study how a prosthesis of this type would interact with a retina. Palanker and Sher are also researching retinal plasticity and have discovered that, in patients whose eyes have been treated with lasers, which can cause scar tissue, healthy cells sometimes migrate into an area where cells have died.

“I’m not sure we would be able to get this kind of information without these arrays,” Palanker says. “We use them all the time. It’s absolutely brilliant technology.”

Litke’s physics-inspired technology is continuing to play a role in the development of neurobiology. In 2013, President Obama announced the BRAIN—Brain Research through Advancing Innovative Neurotechnologies—Initiative, with the aim of mapping the entire neural circuitry of the human brain. A Nature Methods paper laying out the initiative’s scientific priorities noted that “advances in the last decade have made it possible to measure neural activities in large ensembles of neurons,” citing Litke’s arrays.

“The technology has enabled initial studies that now have contributed to this BRAIN Initiative,” Litke says. “That comes from the Higgs boson. That’s an amazing chain.” 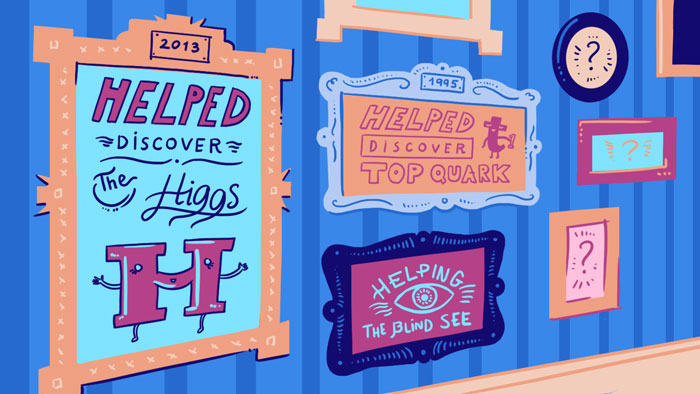