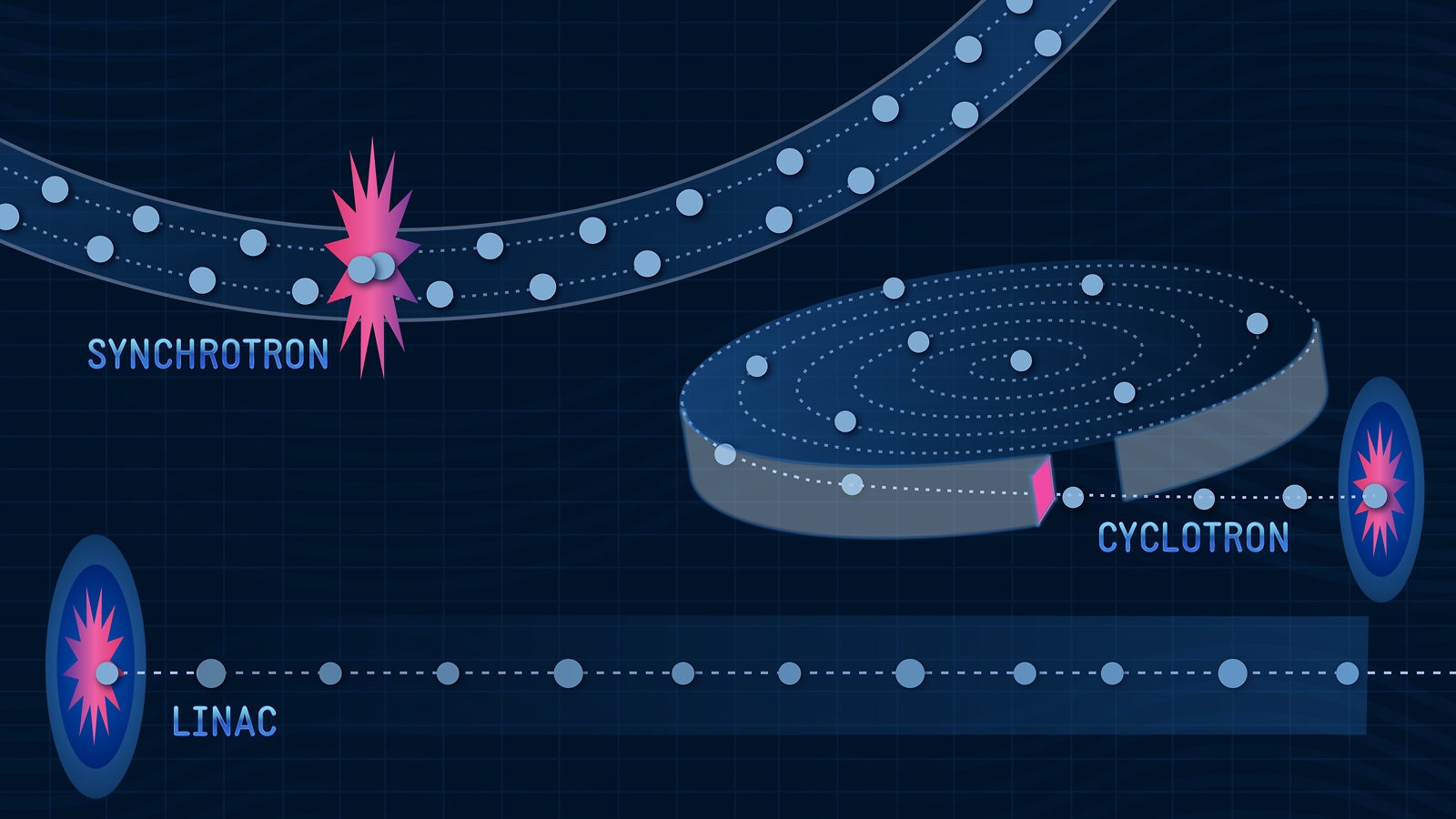 A primer on particle accelerators

What’s the difference between a synchrotron and a cyclotron, anyway?

Research in high-energy physics takes many forms. But most experiments in the field rely on accelerators that create and speed up particles on demand.

What follows is a primer on three different types of particle accelerators: synchrotrons, cyclotrons and linear accelerators, called linacs. 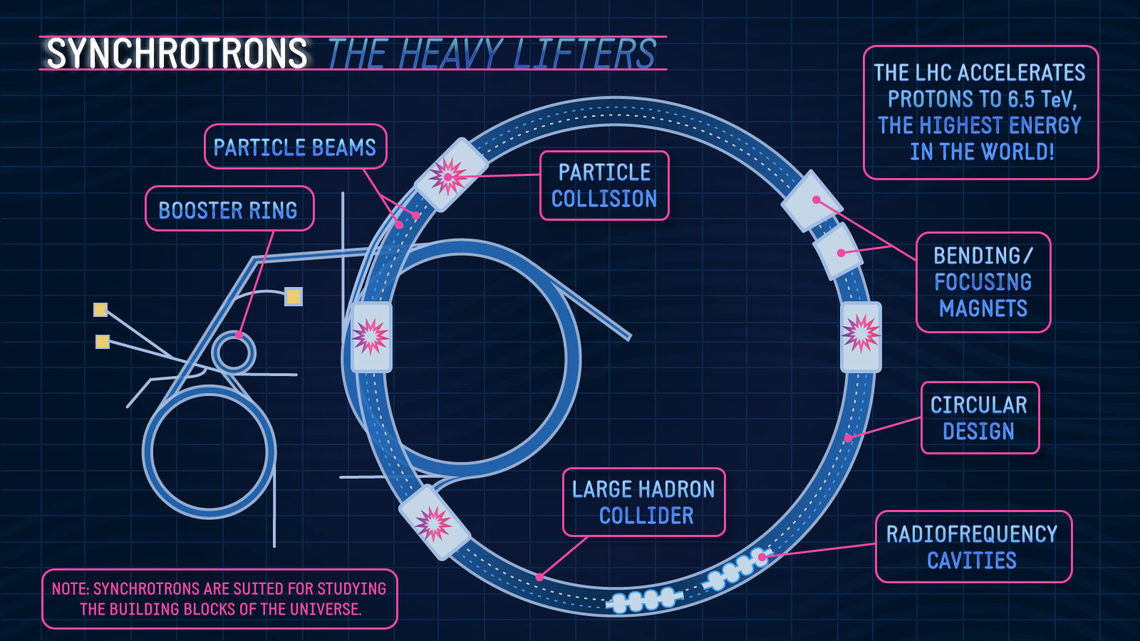 Synchrotrons are the highest-energy particle accelerators in the world. The Large Hadron Collider currently tops the list, with the ability to accelerate particles to an energy of 6.5 trillion electronvolts before colliding them with particles of an equal energy traveling in the opposite direction.

Synchrotrons typically feature a closed pathway that takes particles around a ring. Other variants are created with straight sections between the curves (similar to a racetrack or in the shape of a triangle or hexagon). Once particles enter the accelerator, they travel around the circular pathway over and over again, always enclosed in a vacuum pipe.

Radiofrequency cavities at intervals around the ring increase their speed. Several different types of magnets create electromagnetic fields, which can be used to bend and focus the particle beams. The electromagnetic fields slowly build up as the particles are accelerated. Particles pass around the LHC about 14 million times in the 20 minutes they need to reach their intended energy level.

Researchers send beams of accelerated particles through one another to create collisions in locations surrounded by particle detectors. Relatively few collisions happen each time the beams meet. But because the particles are constantly circulating in a synchrotron, researchers can pass them through one another many times over—creating a large number of collisions over time and more data for observing rare phenomena.

“The LHC detectors ATLAS and CMS reached about 400 million collisions a second last year,” says Mike Lamont, head of LHC operations at CERN. “This is why this design is so useful.”

Synchrotrons’ power makes them especially suited to studying the building blocks of our universe. For example, physicists were able to witness evidence of the Higgs boson among the LHC’s collisions only because the collider could accelerate particles to such a high energy and produce such high collision rates.

The LHC primarily collides protons with protons but can also accelerate heavy nuclei such as lead. Other synchrotrons can also be customized to accelerate different types of particles. At Brookhaven National Laboratory in New York, the Relativistic Heavy Ion Collider can accelerate everything from protons to uranium nuclei. It keeps the proton beams polarized with the use of specially designed magnets, according to RHIC accelerator physicist Angelika Drees. It can also collide heavy ions such as uranium and gold to create quark-gluon plasma—the high-temperature soup that made up the universe just after the Big Bang. 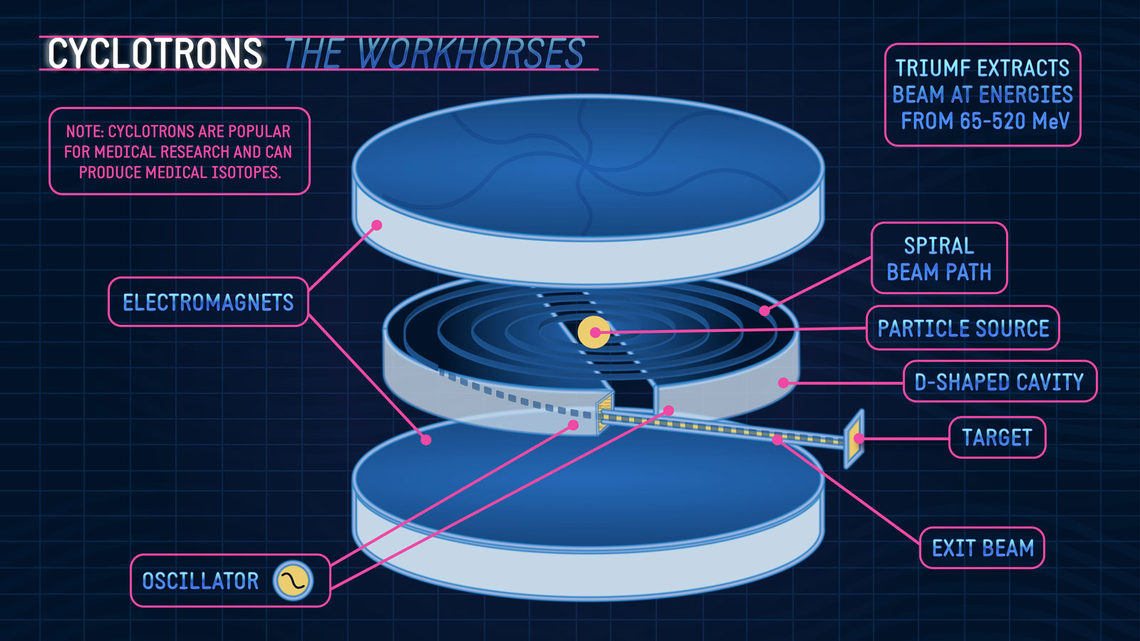 Synchrotrons are the descendants of another type of circular collider called cyclotrons. Cyclotrons accelerate particles in a spiral pattern, starting at their center.

Like synchrotrons, cyclotrons use a large electromagnet to bend the particles in a circle. However, they use only one magnet, which limits how large they can be. They use metal electrodes to push particles to travel in increasingly large circles, creating a spiral pathway.

Cyclotrons are often used to create large amounts of specific types of particles, such as muons or neutrons. They are also popular for medical research because they have the right energy range and intensity to produce medical isotopes.

The world’s largest cyclotron is located at the TRIUMF laboratory in Vancouver, Canada. At the TRIUMF cyclotron, physicists regularly accelerate particles to 520 million electronvolts. They can draw particles from different parts of their accelerator for experiments that require particles at different energies. This makes it an especially adaptable type of accelerator, says physicist Ewart Blackmore, who helped to design and build the TRIUMF accelerator.

“We certainly make use of that facility every day when we’re running, when we’re typically producing a low-energy but high-current beam for medical isotope production,” Blackmore says. “We’re extracting at fixed energies down one beam for producing pions and muons for research, and on another beam line we’re extracting beams of radioactive nuclei to study their properties.” 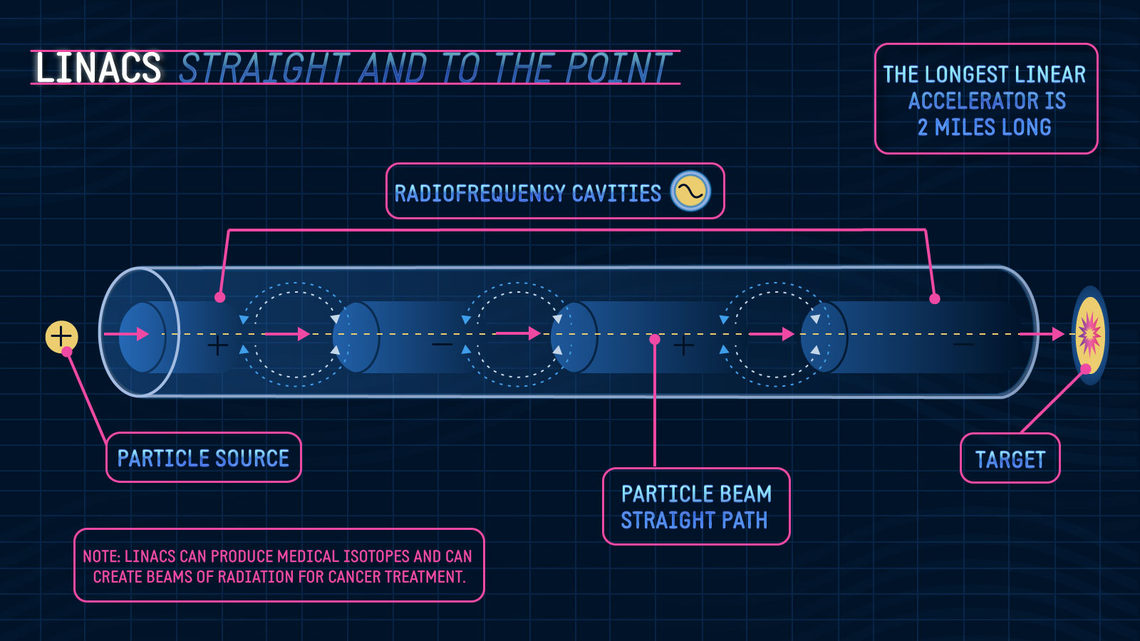 Linacs: straight and to the point

For physics experiments or applications that require a steady, intense beam of particles, linear accelerators are a favored design. SLAC National Accelerator Laboratory hosts the longest linac in the world, which measures 2 miles long and at one point could accelerate particles up to 50 billion electronvolts. Fermi National Accelerator Laboratory uses a shorter linac to speed up protons before sending them into a different accelerator, eventually running the particles into a fixed target to create the world’s most intense neutrino beam.

While circular accelerators may require many turns to accelerate particles to the desired energy, linacs get particles up to speed in short order. Particles start at one end at a low energy, and electromagnetic fields in the linac accelerate them down its length. When particles travel in a curved path, they release energy in the form of radiation. Traveling in a straight line means keeping their energy for themselves. A series of radiofrequency cavities in SLAC’s linac are used to push particles on the crest of electromagnetic waves, causing them to accelerate forward down the length of the accelerator.

Like cyclotrons, linacs can be used to produce medical isotopes. They can also be used to create beams of radiation for cancer treatment. Electron linacs for cancer therapy are the most common type of particle accelerator.