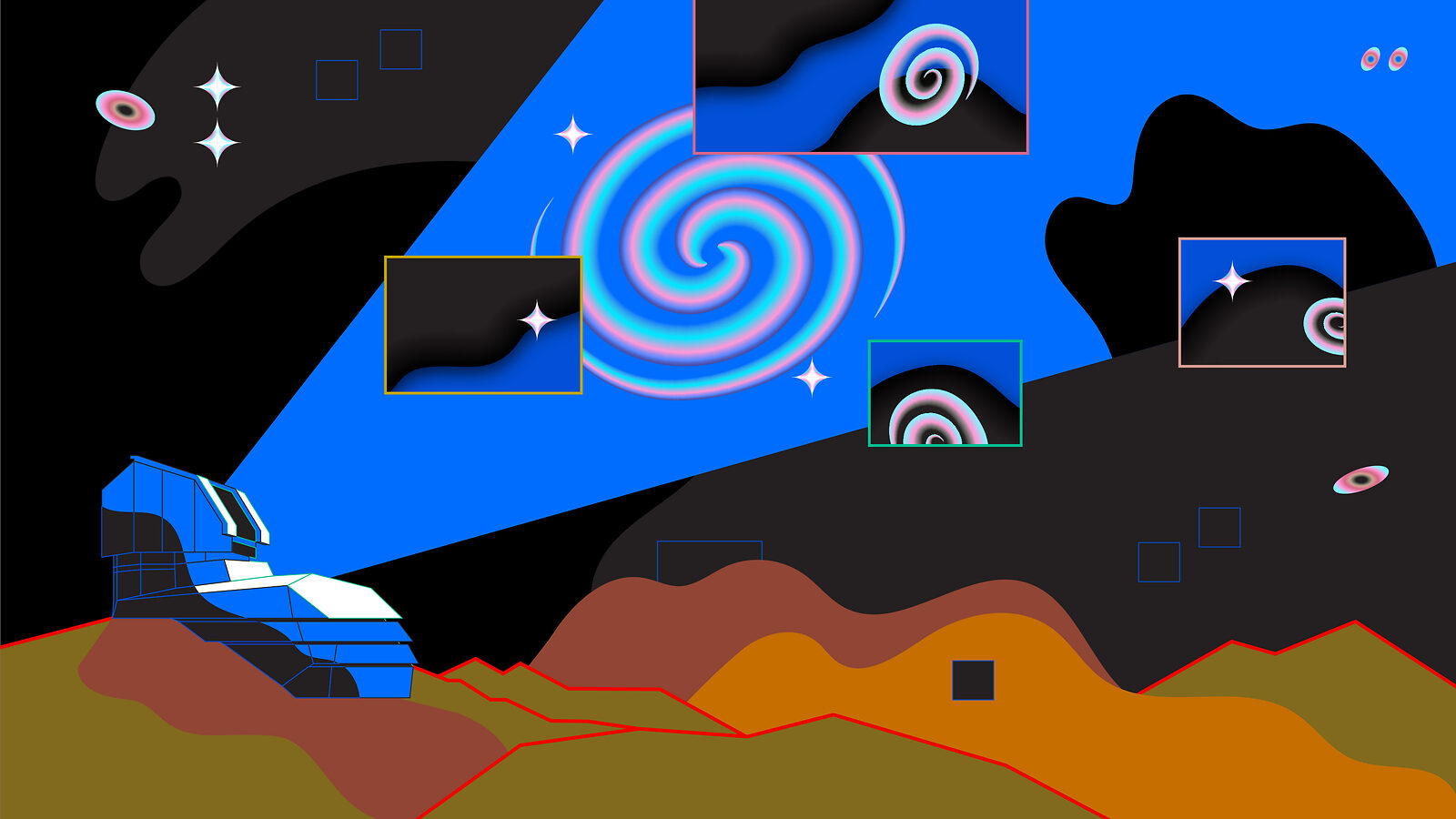 In just a few years, scientists at Vera C. Rubin Observatory in Chile will launch the Legacy Survey of Space and Time (LSST), using the world’s biggest digital camera for ground-based astronomy to take the most detailed pictures of the night sky ever made. When they do, two of the most important things they’ll look for are dark matter and dark energy, the mysterious, invisible substances that make up about 95% of our universe.

But there’s a bit of a paradox here: These substances are invisible, so how are researchers going to find them by looking at a bunch of digital photographs?

The short answer is that they’ll look for patterns—patterns in the structure of galaxies, in the cosmic web that links galaxies together, and in the expansion of the universe. The hope is those patterns will reveal something about how much dark energy and dark matter is out there and how they behave. 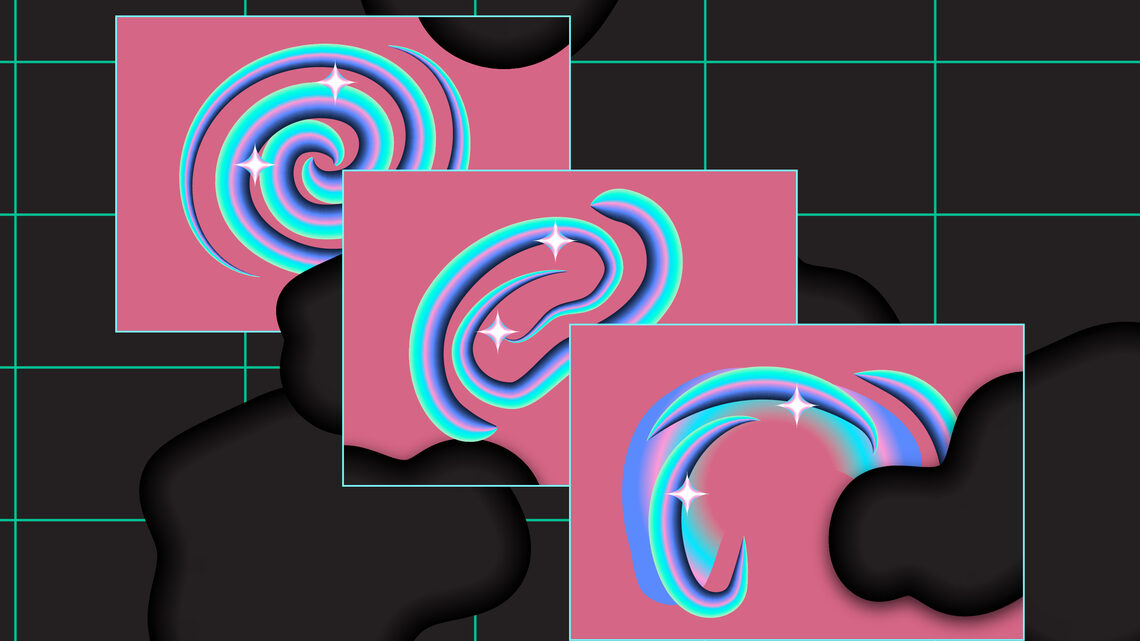 Searching for clumps of dark matter

Rubin Observatory is named for Vera Rubin, a scientist who greatly contributed to the study of dark matter. So of course dark matter is on the menu of topics scientists will use the observatory to study.

Maybe the most direct approach to studying dark matter is simply to map it. By finding out how much of it there is and how it clumps together around galaxies, cosmologists can put increasingly tighter limits on what it might be.

One mapping approach is to look for strong gravitational lenses. The gravitational pull of a massive object can bend the path of light as it travels through space. How much pull an object has depends on how much mass it has, and dark matter surrounding an object can give its mass an otherwise invisible boost. An extremely massive object can bend light from a galaxy or quasar behind it so much that that light appears as a ring or arc around the object, or even as multiple images of the same galaxy or quasar.

Right now, observers are working from 100 or so of these strong lenses. LSST, says University of Wisconsin cosmologist Keith Bechtol, is expected to find 100 times more.

A subtler approach relies on the many smaller galaxies that permeate the cosmos. Despite their small size, these galaxies still bend light—except instead of forming rings or multiple images of more distant galaxies, they tend to warp the apparent shapes of those objects. By looking for correlations between these warped shapes, researchers can infer how much dark matter is within and between the smaller galaxies.

The distribution of dark matter within the galaxies helps constrain theories of dark matter. The method requires finding a vast number of these galaxies, but with LSST’s power and wide field of view, studying dark matter through this weak gravitational lensing becomes possible.

The particle properties of dark matter can affect the number of very small dwarf galaxies in the Milky Way and beyond. LSST is expected to find at least a hundred more of these, which can inform a range of dark matter models.

There are still more ways to find and study dark matter. One is to look for streams of stars falling into a galaxy, the paths of which may be disrupted by small satellite galaxies too difficult to see directly even with Rubin Observatory’s impressive capabilities. Another is to search for massive, compact objects—tiny black holes, for example—using what’s called microlensing, a gravitational effect that can temporarily increase a galaxy’s brightness as an object passes in front of it. It’s also possible that dark matter could affect the evolution of certain kinds of stars, or produce gamma rays through interactions with ordinary matter.

These possibilities could be studied in combination with direct dark matter searches such as the LZ experiment or space-based observatories such as the Fermi Gamma-ray Space Telescope. 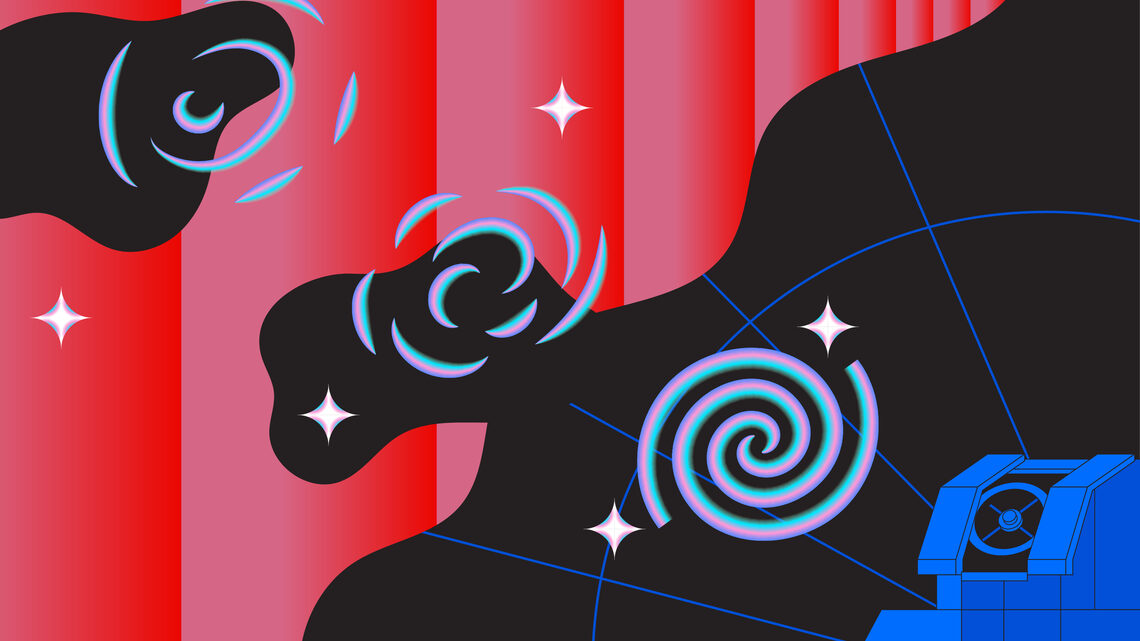 Blowing up the cosmic balloon

Studying the evolution of dark matter structures over time can lead to insight about another important topic, dark energy. With support from DOE’s Office of Science, Rubin Observatory seeks to understand this other side of the dark universe.

Physicists originally inferred the existence of dark energy from the observation that the universe is expanding at an ever-increasing rate, something that should not happen without the influence of an unseen force. Measuring the history of that expansion remains the most direct way of studying dark energy. That measurement comes down to two things: how fast objects are moving away from us, and how far away they are. (Because light travels at a fixed speed, the latter is equivalent to how old the light is—looking deeper into space is equivalent to looking farther back in time.)

Astrophysicists can measure speed fairly easily as long as they know what the light coming from an object should look like—what wavelengths they should see. If they do, the measurement comes down to what’s called redshift. Just as the sound of a siren takes on a lower pitch when moving away from us, light takes on longer wavelengths and turns redder the faster objects speed away from us.

Measuring distance is harder than speed, but cosmologists have several ways to do it, explains Phil Marshall, a scientist at DOE’s SLAC National Accelerator Laboratory.

One way is with supernovae. Based on observations of nearby supernovae, researchers know what the light from a standard supernova should look like. The redshift reveals how fast supernovae are speeding away from us as the universe expands, and physicists can use their brightness to infer their distance—the dimmer they are, the farther away they are. By looking at many supernovae from different distances, they can reconstruct the universe’s expansion history.

Another way to measure distances is time-delay cosmography. In this technique, cosmologists use strong gravitational lensing—the fact that massive galaxies bend light around them along multiple paths, creating multiple images of objects in their background. By studying images of flickering objects called quasars or exploding objects like supernovae, teams can infer the relative time it takes light to travel each of these paths around a galaxy. From that information, researchers can infer the distance to the galaxy. 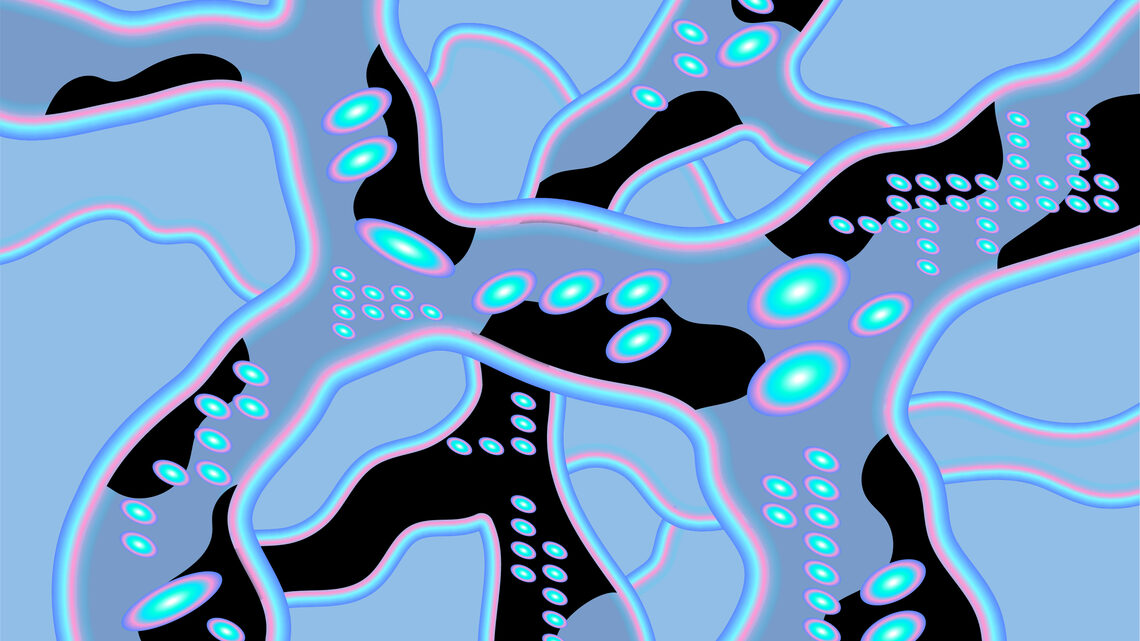 Cosmologists can also make inferences about dark energy by measuring the large-scale structure of the universe—the web of galaxies, dust, gas and dark matter that extends throughout known space—and how that has changed over time. Understanding that evolution, Marshall says, could reveal a great deal about dark energy and other grand-scale workings of the cosmos.

One way to measure that structure is to count galaxy clusters at various distances, which correspond to different points in the universe’s history. By breaking these counts down by clusters’ masses and by their distances from us, researchers can investigate how the large-scale structure of the universe has evolved over time.

A more subtle measurement of cosmic structure comes from gravitational lensing methods similar to those cosmologists use to search for dark matter. Because dark energy helped control how fast the universe expanded at different points in its history, it also helped shape how dark matter clumped together in the cosmic web. Seeing how clumpy the dark matter distribution is could, therefore, help researchers study dark energy as well.

In each of these cases, it’s essential to look at galaxies at many different distances to help reconstruct how cosmic structures have changed over time, says Rachel Mandelbaum, an astrophysicist at Carnegie Mellon University. Only by understanding how the universe has expanded over time, how galaxies have clustered differently over time and so on will researchers begin to get a handle on dark energy.